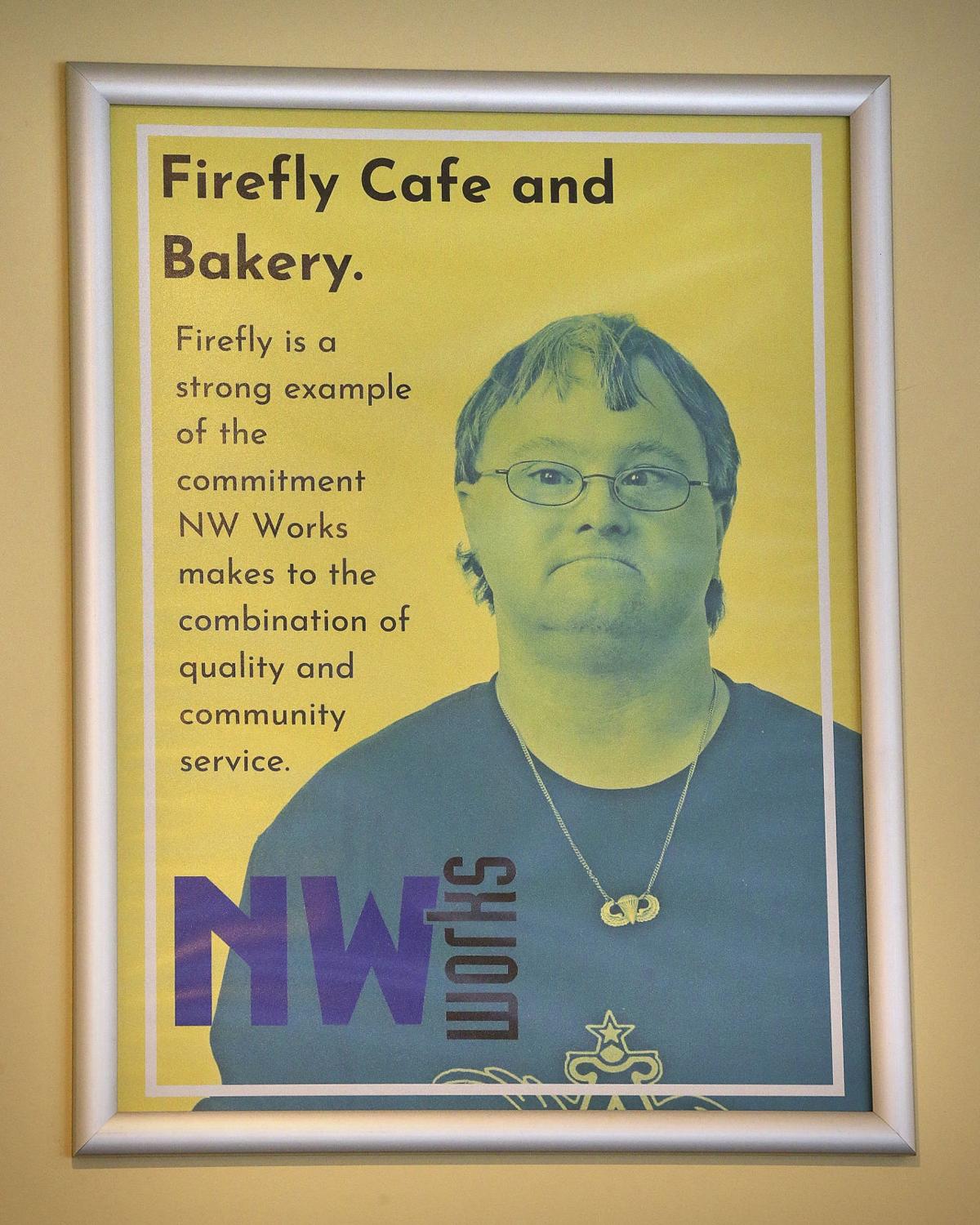 Firefly Cafe and Bakery, which employs NW Works clients, is slated to close at the end of the month. The restaurant is located in the Creekside Station Shopping Center in Kernstown. 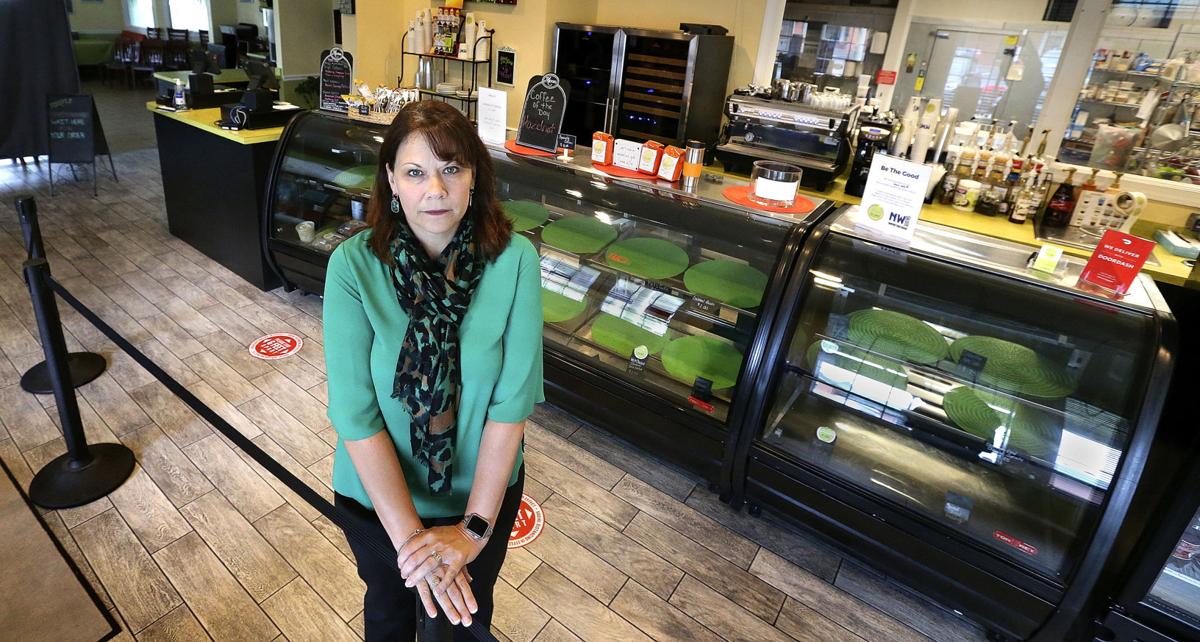 Debera Taylor, chief executive officer of the nonprofit organization NW Works, stands in the Firefly Cafe and Bakery on Monday. The restaurant, in the Creekside Station shopping center in Kernstown, employs the clients of NW Works. Unless a deal is made with a new owner/operator, the eatery will close at the end of the month. Financial fallout from the coronavirus pandemic fueled the decision. 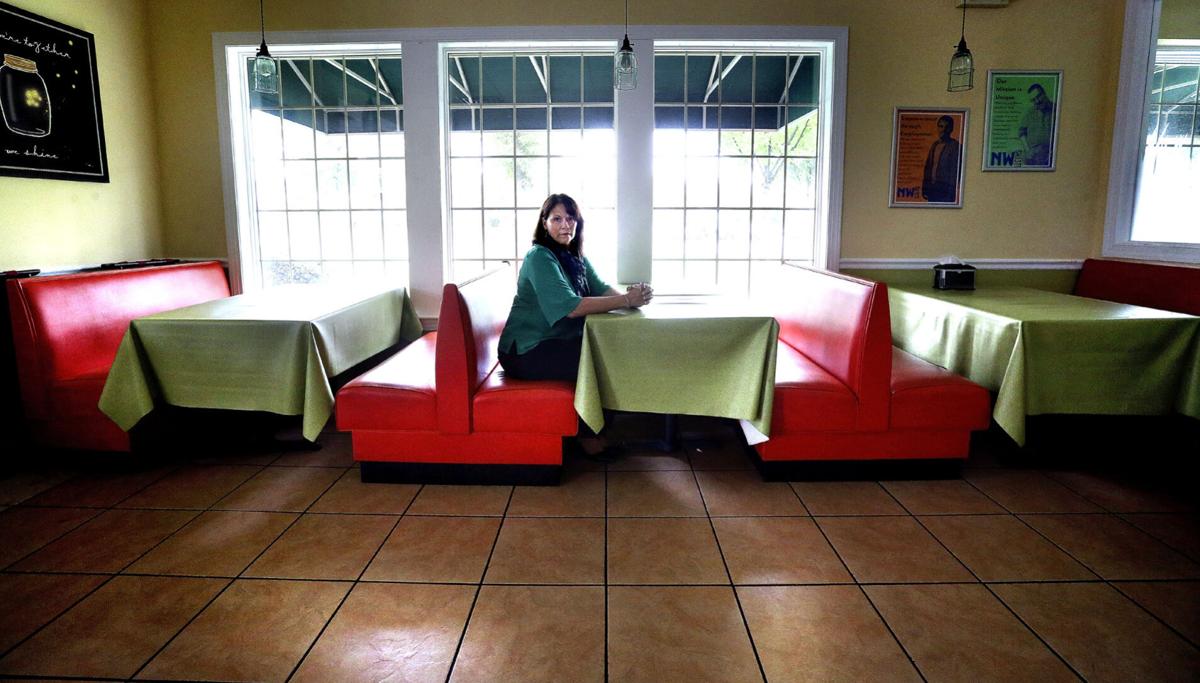 Debera Taylor, chief executive officer of NW Works, sits at a table Monday in the Firefly Cafe and Bakery, which is slated to close at the end of the month. The restaurant, in the Creekside Station shopping center in Kernstown, employs the clients of NW Works. Financial fallout from the coronavirus pandemic fueled the decision.

Firefly Cafe and Bakery, which employs NW Works clients, is slated to close at the end of the month. The restaurant is located in the Creekside Station Shopping Center in Kernstown.

Debera Taylor, chief executive officer of the nonprofit organization NW Works, stands in the Firefly Cafe and Bakery on Monday. The restaurant, in the Creekside Station shopping center in Kernstown, employs the clients of NW Works. Unless a deal is made with a new owner/operator, the eatery will close at the end of the month. Financial fallout from the coronavirus pandemic fueled the decision.

Debera Taylor, chief executive officer of NW Works, sits at a table Monday in the Firefly Cafe and Bakery, which is slated to close at the end of the month. The restaurant, in the Creekside Station shopping center in Kernstown, employs the clients of NW Works. Financial fallout from the coronavirus pandemic fueled the decision.

WINCHESTER — Barring a Hail Mary pass in the game’s final seconds, Firefly Cafe and Bakery will close permanently at the end of the month.

The restaurant at 3035 Valley Ave., which is operated by the Winchester-based nonprofit NW Works Inc. and used by the organization to train and employ adults with developmental difficulties, will become the latest victim of COVID-19 unless a new financial partner steps in before Sept. 30.

“On Friday, we talked to all of the employees individually,” NW Works CEO Debera Taylor said on Monday morning as tears welled in her eyes. “A couple of our clients are having a difficult time understanding why we are closing.”

Firefly Cafe and Bakery opened in 2015 in the Creekside Shopping Center and underwent an expansion in 2017. More than 60 NW Works clients have benefited from the cafe, either as employees or trainees. Taylor said she’s actively looking for new firms willing to offer jobs to the restaurant’s current employees, but if they’re out of work for a period of time, NW Works will fold them back into its training and service programs until the right opportunities come along.

“We want to find jobs for everyone who works here,” Taylor said. “That’s my promise to them.”

Closing Firefly Cafe was the last thing Taylor wanted to do, but financially her hands were tied. NW Works is contracted by Trex, HP Hood and dozens of other area firms to assist with manufacturing, distribution and support services. But the nonprofit had to close its manufacturing facility and program headquarters at 3085 Shawnee Drive on March 13 to protect clients and staff from the COVID-19 pandemic. As a result, monthly revenues have dropped.

At the same time, federal funding for NW Works and Firefly Cafe has been reduced. Appropriations from the pandemic-related CARES Act helped, Taylor said, but not enough to make up for all the revenues Firefly has lost due to the pandemic.

The closing of Firefly Cafe will have a profound impact on the lives of the NW Works clients who work there. For example, Taylor mentioned a young man named Josh who was brought in as a dishwasher and was promoted to prep cook as he improved his skills, and a young woman named Annie who is an exceptional baker that enjoys making lemon bars, cookies and other sweet treats for Firefly’s customers.

“They love coming in here every day and feeling a sense of purpose,” Taylor said. “It’s not about the money they receive; it’s about the purpose.”

Although the closing of Firefly Cafe and Bakery has been publicly announced, it’s not necessarily a done deal. Taylor said the business could remain open if a new owner/operator comes forward to purchase the restaurant. The only caveat is that NW Works would have to remain a partner in the operation so its clients could continue to find jobs and training opportunities at the cafe.

Taylor said Firefly, which is open from 8 a.m. to 2 p.m. Tuesday through Saturday, pulls in an average of $600 to $700 a day for its breakfast and lunch services, but that isn’t enough to cover NW Works’s overhead. With the proper guidance, though, it could become a moneymaker for a new investor.

“A lot of business meetings and networking take place here,” she said.

For the next month, Taylor will be balancing the search for a new owner/operator with making preparations for Firefly’s closure. If someone steps in soon enough, the restaurant could potentially remain open without a hiccup. Otherwise, Taylor said she’ll retain Firefly’s managers and a few NW Works clients for an additional 30 days or so to help liquidate the cafe’s assets.

Even if Firefly closes, donations from the public will still be needed to help NW Works cover expenses. For example, Taylor said Firefly is tied into a three-year service contract for its recently acquired cash-register system.

Taylor, who was named CEO of NW Works in October, said she never dreamed she would be the one to announce the permanent closure of the nonprofit’s popular Firefly Cafe and Bakery.

“I didn’t take this job to close a restaurant; I took this job to help people,” she said. “We looked at other options, and we came to the conclusion that we really don’t have any other options.”

NW Works and associated programs like Firefly are mostly paid for with tax dollars in the form of intellectual disability waivers granted to those who attend. I bring this up because I wonder how many of the folks that are shamelessly blaming Liberals are aware that folks who attend NW Works are often dependent on Medicare and Medicaid waivers for attendance at heavily subsidized NW Works programs like Firefly. (Never mind food, housing, and transportation between various programs sponsored by NW Works - nor the heroic social services provided by the underpaid folks at Northwestern Community Services and NW Works proper - nor those who work as assistants helping the disabled at little more than minimum wage). I bring this up, because if the effort to kill the Affordable Care Act had passed then many folks with disabilities at NW Works would have been out already. If the state had not expanded Medicare, which State Republicans railed against, then many fine folks would never have even been able to attend to begin with. Indeed, there are many folks today who are still waiting for ID waivers (its not an easy process nor are there enough funds for everyone) so that they can even begin to attend when NW Works does finally fully reopen. With that said, please keep in mind your sudden support for disability programs when Republicans go after them again. I fully expect you to be outraged and call them out when they attack funding for places like NW Works. Otherwise, I will be forced to believe that you don't actually care and are callously using the suffering of disabled folks as an excuse to throw insults at Liberals. The mocking that Trump directed at a man with disabilities is a whole other subject, but don't forget about that either.

NW Works, the Firefly Cafe, and the young men and wemen who benefit from their goodness don't deserve to have posters trying to make political hay over their troubles.

Some people have no shame.

I hope the cafe can get someone to invest to keep them open. The comments regarding Democrats are gold. Politicizing a global pandemic was the dumbest thing, and we all know who did that. Instead of blaming the virus, political parties are to blame. The left is blamed for being too cautious, and the right for denying the science and not caring for protecting their neighbors. The reason this pandemic won't go away is because we have leadership that was ill prepared, on purpose, to handle such situations. 180,000+ deaths. Instead of lining the billionaires pockets, small business like this cafe should've been taken care of. I have a feeling no one on this thread is in the 1%.... Open your eyes.

Meanwhile, other article in today's Star of a new café shop in Stephens City just opening up. Wonder how long they'll last?

Did the business/non-profit apply with SBA (small business admin)?

It's truly a shame what the democrats did with this virus. They destroyed a great healthy economy. Never vote blue again, people!!

Sadly, just another casualty of liberal hysteria. Closing down all public life (for how long?) will save some lives but look at the future when starvation and mayhem reign and the result will be third world America!

I can't bear this news. There must be a way to save the Firefly. What can our community do to help?

More people show up and get something to eat.

Why can't the government help a worthwhile cause such as this one. They hand out money to people who don't deserve it; why not give it to an organization that does deserve it.

Instead of "some major companies in Winchester stepping up to the plate" .... Maybe everyone, in Winchester, and the surrounding area, should go to the Firefly Cafe and overwhelm them in business. Come on people, support small business always!! Especially this very special little cafe..

Some major company in Winchester needs to step to the plate to make sure this business stays open. What a great tax write off that would be for your company.

Another casualty to political "science" and mindless hysteria. Thanks, Democrats!

yeah! thank you democrats! losers! how dare you try to keep people alive and take the virus seriously!

Yes, the nasty leftists...probably wanted to protect those workers from numnuts who won't wear masks. Yeesh!

This is terrible news. The restaurant was a wonderful place to visit and eat and had such a wonderful vision for our handicapped citizens.

Sad. It was developed for a great purpose. I have always enjoyed the food, atmosphere and the smiles by the staff at Firefly. Les Veach