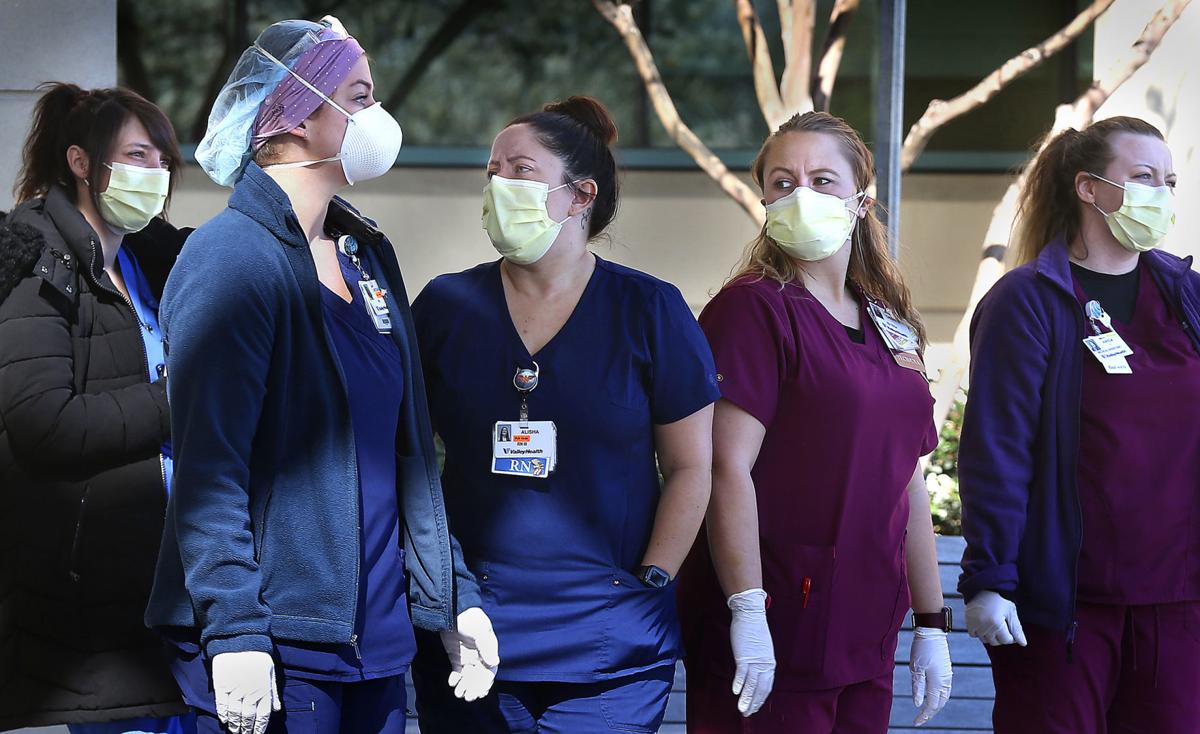 Medical personnel wait for a potential coronavirus patient to be driven up to the emergency department entrance at Winchester Medical Center last week. 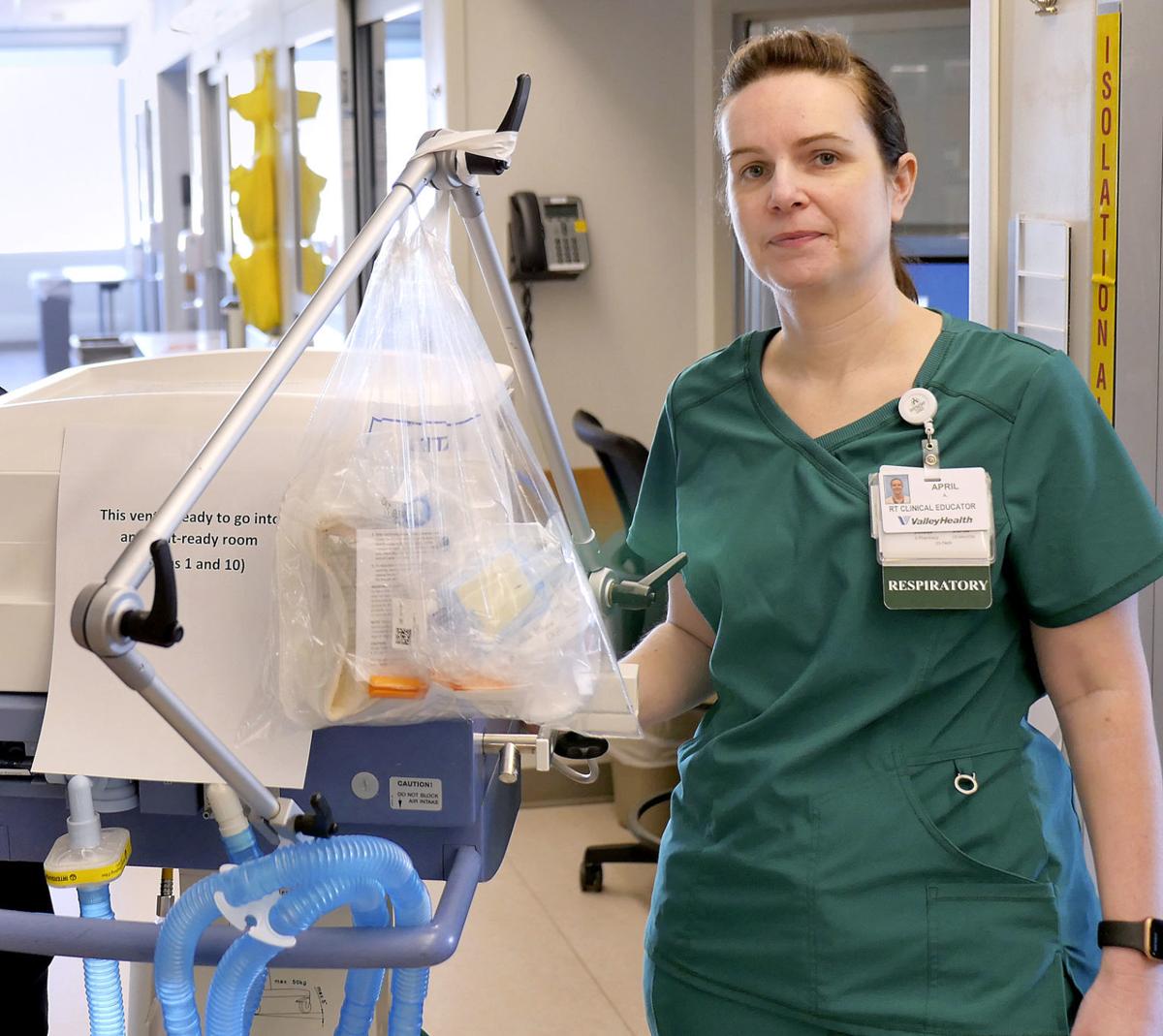 A Valley Health respiratory therapist is shown with a portable ventilator inside Winchester Medical Center.

Medical personnel wait for a potential coronavirus patient to be driven up to the emergency department entrance at Winchester Medical Center last week.

A Valley Health respiratory therapist is shown with a portable ventilator inside Winchester Medical Center.

WINCHESTER — As local medical personnel plan for a wave of coronavirus patients expected in May, they are running low on personal protective equipment and have a limited number of ventilators.

Valley Health System, the six-hospital chain that includes Winchester Medical Center, has 175 ventilators with 100 at WMC. Virginia, a state of 8.5 million, has roughly 2,200 ventilators, according to Julian Walker with the Virginia Hospital & Healthcare Association. Walker noted that most ventilators aren’t currently in use, but that is likely to change with thousands of Virginians expected to become infected.

The Virginia Department of Health’s pandemic plan predicts 30,164 hospitalizations statewide over eight weeks during a moderate pandemic, but the numbers will “increase significantly” if it is severe. “Furthermore, the Centers for Disease Control and Prevention estimate that pandemic activity could continue for as long as 18 months,” said the state’s report, which was written last year and updated in February.

Mark H. Merrill, CEO and president of Valley Health, said on Tuesday that the hospital system has about two weeks’ worth of personal protective equipment such as N95 masks, gowns and gloves. He said Valley Health has orders in to private companies. “The two biggest problems we have are inadequate testing capability and limitations on the supply chain,” he said.

In addition to private vendors, Valley Health is also relying on the Strategic National Stockpile, which is overseen by the Federal Emergency Management Agency. But Reuters reported this week that the stockpile is nearly depleted. Critics say the shortage is part of of a failed response to the pandemic by the administration of President Trump who disbanded the White House pandemic taskforce in 2018 and minimized the dangers of COVID-19 in January and February comparing it to the flu.

“President Trump spent months downplaying the coronavirus crisis and wasting precious time as thousands of Americans tested positive, got sick, and died,” U.S. Rep. Carolyn Maloney, D-NY, chairwoman of the House Committee on Oversight and Reform, said in a news release on Tuesday. “Rather than casting doubt on the gravity of this pandemic, the administration should have been working around the clock to prepare and execute plans to obtain desperately needed personal protective equipment and medical supplies.”

FEMA said the 100,000 ventilators Trump promised would be ready nationwide in June, according to the documents. FEMA compared its efforts to buy PPE on the open market to “chasing rabbits in an open field.” The release said the U.S. Department of Health and Human Services admitted on Monday that it knew by mid-January that there weren’t enough N95 masks for the country. “HHS and FEMA officials were not able to provide specific timelines about when additional equipment and supplies would be procured by the federal government and made available to states,” the committee’s news release said.

Although masks, gowns and gloves are designed to be used once, Merrill said staff will re-sterlize equipment using guidelines from the Centers for Disease Control and Prevention and will also ration supplies.

“We are working diligently to make sure we manage the consumption,” he said. “If people don’t need to wear a mask, they do not wear a mask. And we’re looking at re-processing. Some of these masks can be worn more than one time.”

Merrill said he’s grateful to local companies that have donated masks and to residents who are sewing masks. He said he’s also proud of how hospital employees have responded.

“They are putting themselves in harm’s way,” Merrill said. “It’s our responsibility to advocate to get the resources that we need to care for these patients while also protecting our caregivers.”

Kudos to our local health care workers! Thank you for all you do and I am wishing you more strength and courage in the upcoming months.

Hey, anyone remember this from the good ol' days?

This is a new low for the Star--inserting partisan (Democrat, of course) propaganda into a local news story that obviously is important to residents. But this example is so blatant it works against the "journalist" who wrote it. Usually the propaganda is more subtle. As someone who didn't vote for Trump or Clinton in 2016, I agree with The Node that both parties were asleep at the wheel. The Democrats, for their part, had more important things on their mind for the past four years--impeachment.

Agree with you totally! The Leftist Star is a joke! Trump is doing all he can do with a massive pandemic problem.

I suppose Rep Carolyn Maloney has the ability to see into the future and expects the President to have that same ability. Shame on her. I'll be doing my part by sewing homemade fabric masks to donate as it seems to be the WH and CDC's latest suggestion.

See into the future? I guess you didn't read where the democrats were hyping this, this new "hoax", and "it would be gone by April." Not to mention not listening to his non intelligence briefings: “President Trump spent months downplaying the coronavirus crisis and wasting precious time as thousands of Americans tested positive, got sick, and died,” Rather than casting doubt on the gravity of this pandemic, the administration should have been working around the clock to prepare and execute plans to obtain desperately needed personal protective equipment and medical supplies.” Nice of you to sew masks. Maybe the richest country in the world can put pandemic supplies in the next budget, along with people who do know how to plan, there's a thought

There is so much wrong with this story. The “journalist’s” blame to the current administration for the shortage in the stockpile when anyone paying attention knows the stockpile was decimated during the previous administration and required resupply was never done. A real journalist would know that both administrations bear some blame. Then the vitriolic remarks from the highly partisan congresswoman from NY show that this journalist has no intention of presenting the news but wishes to be an opinion writer. Is there an editor at the Star?

Facts don't matter when you've got an agenda to push and blame to lay anywhere but where it belongs. Despite the whining of the local Leftists, other than the editorials, the Star reporters have been showing their "progressive" bias for quite some time...

Yeh doc.... those whiney local leftists you think are out to get you, right? No trump bias from you, ever.

totally agree.. Anyone can read where the local info ends and the WP lifted story starts. sadly this country didn't know a bat disease was so different but guess neither did Evan.. Read story twice to see why local info changed so drastically but normally a WP art. starts diff. w all the blame and hides the history. Poorly done reporting

Since much of this is actually fact that can be verified by trump's own statements, it's kind of hard not to have an opinion

As usual, the Democrats can.'t wait to blame President Trump for something else. You had best check your own closet Ms. Maloney.

He's not to "blame" for this virus, but he should accept responsibility for how he communicated about it, you know, like you would have condemned Obama for not doing: Quote: "For two months, President Trump dismissed the coronavirus, mocked anyone who took it seriously and blamed the media for inflaming a situation he had entirely under control.This week he suggested with royal confidence that if only 100,000 Americans die, “we all together have done a very good job.”

Brilliant novelists like Salman Rushdie, Howard Jacobson and Dave Eggers have tried, but none has fully captured the absurd mendacity of Donald Trump and the sycophants who cheer him on.“

Hey Spock who exactly was it who complained to the heavens when President Trump immediately place a travel ban from persons traveling from China to USA in January?!? Oh that is right it was the liberal lying left, led by Pelosi and Schumer. Keep on reading those lying liberal talking points sent to you from those who were skeptical of President Trump in the early stages of the Wuhan Virus.

Seriously. Reality has no place in the minds of those who suffer TDS...

And then he took a three month nap and ignored it and called it a "lying liberal hoax". Preach somewhere else Steven, all one has to do is read and listen

Read and listen... uh, okay... funny how that only works when someone agrees with YOU. What exactly did Steve say that was incorrect?

Actually, what did I say that was incorrect, doc?? That presser yesterday should have given everyone the chills.

Again, what did Steve say that was incorrect? Also, some clear, real world examples of blatant, Leftist media (as well as their sycophantic mouthpieces) hypocrisy, if you care... https://justthenews.com/politics-policy/coronavirus/news-media-liberals-mock-conservatives-early-pandemic-comments-they