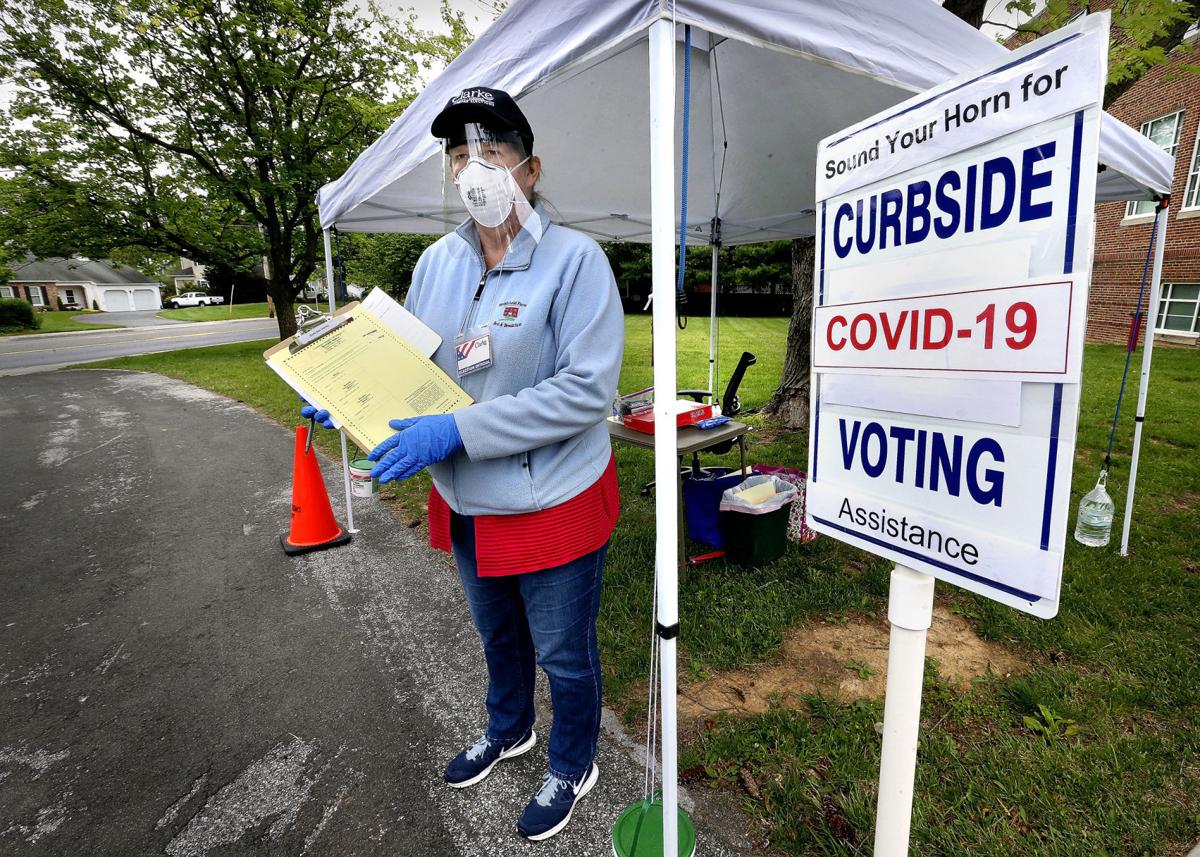 Officer of Election Betsy Pritchard waits for a voter to drive up for curbside voting during the Berryville election Tuesday. Rules governing who can vote curbside have been eased during the coronavirus pandemic. 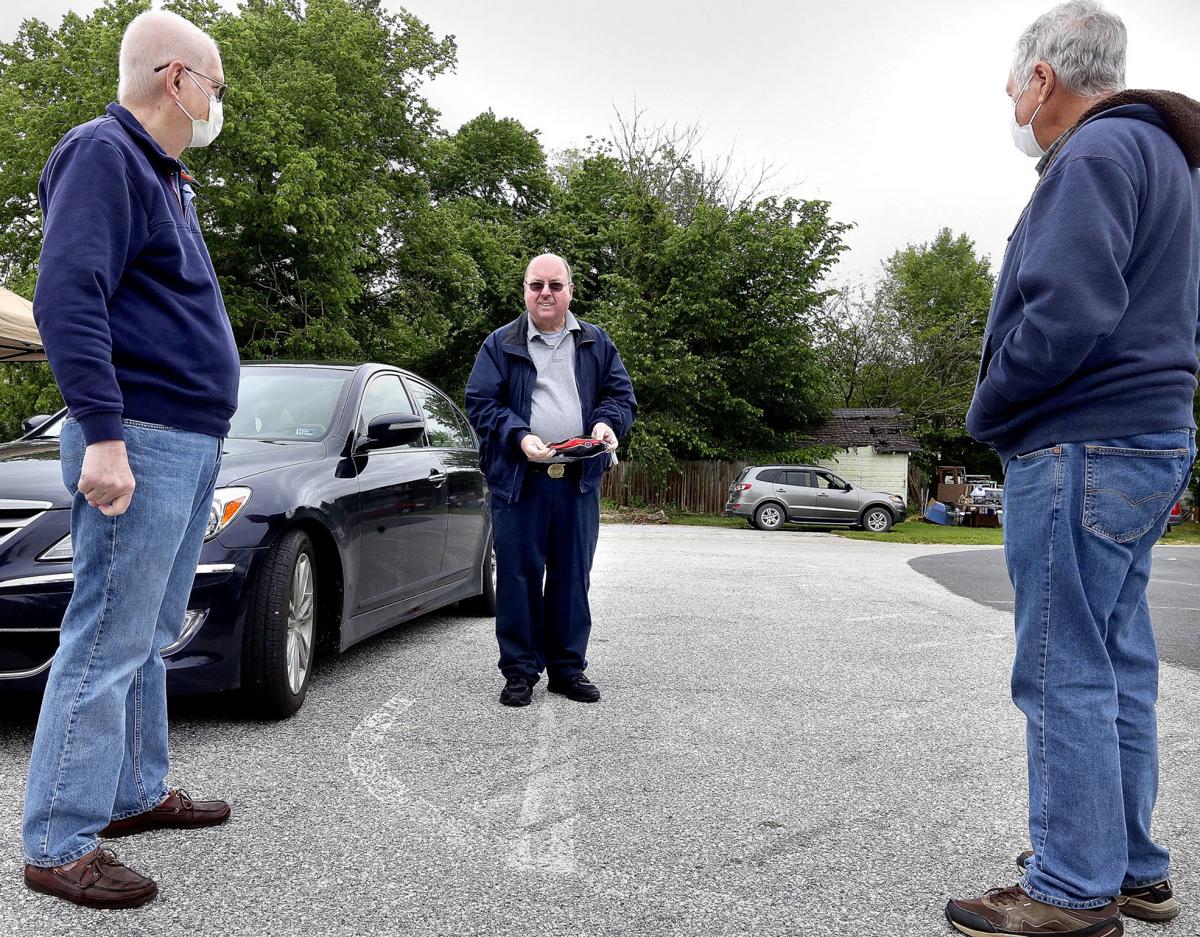 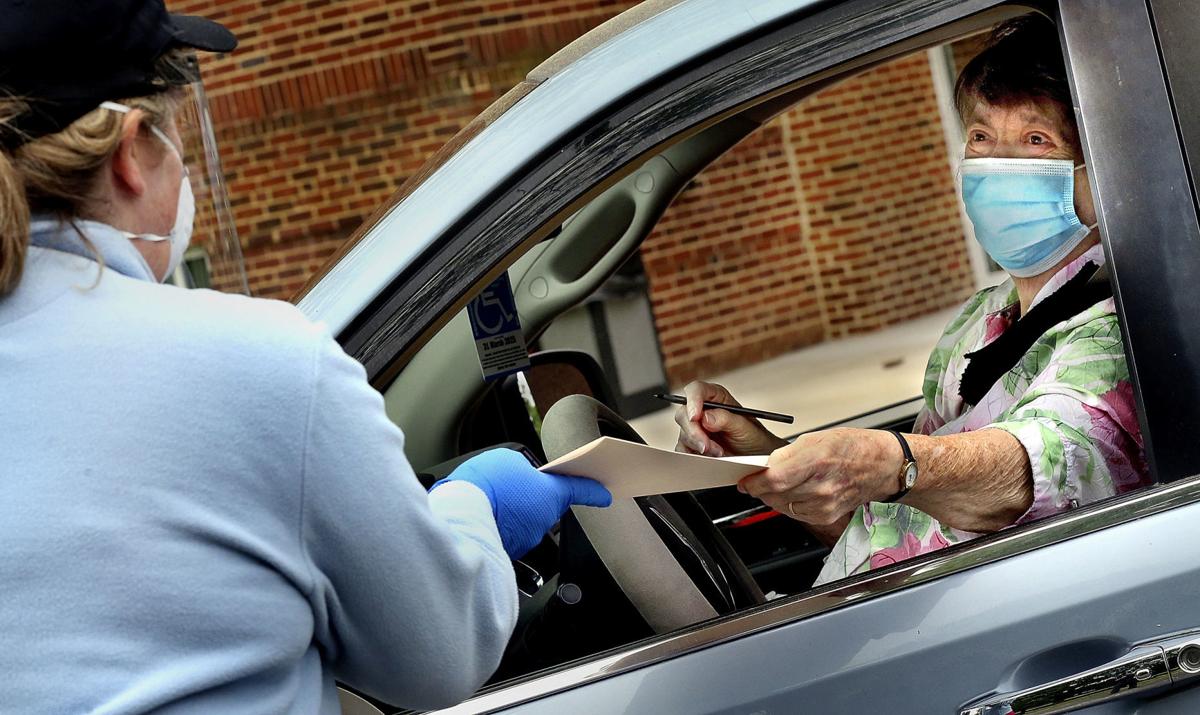 Donna Germelman hands her ballot enclosed in a folder to Officer of Election Betsy Pritchard while voting curbside in Berryville’s municipal election Tuesday. Rules governing curbside voting have been eased during the coronavirus pandemic.

Clarke County Chief Deputy Travis Sumption carries his ballot to be scanned while voting in Tuesday’s municipal election in Berryville.

Officer of Election Betsy Pritchard waits for a voter to drive up for curbside voting during the Berryville election Tuesday. Rules governing who can vote curbside have been eased during the coronavirus pandemic.

Donna Germelman hands her ballot enclosed in a folder to Officer of Election Betsy Pritchard while voting curbside in Berryville’s municipal election Tuesday. Rules governing curbside voting have been eased during the coronavirus pandemic.

Clarke County Chief Deputy Travis Sumption carries his ballot to be scanned while voting in Tuesday’s municipal election in Berryville.

Arnold, who ran unopposed, succeeds Patricia Dickinson, who did not seek a second four-year term as mayor.

Arnold, McDonald and Gibson will begin their terms on July 1.

Voter turnout in the town election was light. It was originally scheduled for May 5, but Gov. Ralph Northam postponed the state’s municipal elections until May 19 over coronavirus concerns. The delay, along with the uncontested races and concerns about the virus, likely contributed to fewer voters heading to the polls in the Clarke County Public Schools Administration Building at 317 W. Main St.

Town voters were encouraged to vote absentee ballot, if possible, to prevent the spread of the coronavirus.

Clarke County General Registrar and Elections Director Barbara Bosserman said that of the roughly 3,151 registered voters in Berryville, 140 cast ballots in person on Tuesday and 143 voted by absentee ballot. The 283 voters who cast ballots represents about 9% of the town’s registered voters.

“The absentee ballots is about three times the number that we had in the last town election, where the races were uncontested,” said Clarke County Chief Officer of Election Bob Holcomb. “That’s a considerable number of people who decided to vote absentee.”

At the polls, precautions were taken to ensure that voting would be safe for those who decided to vote in person. The voting room was limited to 10 people — including voters and elections workers — at all times. Plexiglass shields were installed to separate voters from poll workers, and the floor was marked with places to stand to ensure that people stayed at least six feet apart. Voting booths were set up to adhere to social distancing standards, with booths cleaned and sanitized after each use. Voters were given disposable pens to mark their ballots so they did not have to use a pen touched by another voter.

Curbside voting was also made available to all voters.

“We haven’t really changed the process at all,” said Holcomb. “We just made it cleaner.”

Considering the circumstances, Arnold said he thought voter turnout was good. He spent most of the day outside the school building greeting voters. As mayor, he said he wants to encourage economic development without changing the town’s overall character.

“A lot of people like Berryville the way it is,” said Arnold, owner of Berryville Auto Parts. “And of course we are going to have some natural growth, which is occurring. We are going to continue to look for some economic development, continue to look for opportunities.” He also said he wants to make sure the town does whatever it can help local businesses impacted financially during the COVID-19 pandemic.

He added that he will bring “more unity” and the “ability to work together” to Town Council and that he works well with the other council members.

Arnold has served as town recorder, a position similar to vice mayor, since 2006. He ran unsuccessfully for mayor against Dickinson in 2016. The two clashed on council, with Dickinson questioning whether Arnold’s business dealings with the town were a conflict of interest. The town patronizes his auto parts store. Following a state police probe, Arnold was charged with seven misdemeanor counts of malfeasance, but a special prosecutor concluded Arnold did nothing wrong and dismissed the charges.

As mayor, Arnold said the town will still utilize Berryville Auto Parts for vehicle needs. He said it would not be a conflict of interest.

He also said he would work to improve communication with residents and that a tax increases could be necessary within the next four years.

“Nobody wants a tax increase or to pay more money,” Arnold said. “But we’ve got to realize we have some infrastructure and business to take care of in the town.”

McDonald, who was at the polls greeting voters, said her top priority during her next term is the construction of a new water treatment plant. She said the existing plant is aging and that the town has been putting “Band-Aids” on it in recent years.

“I wish I could say I don’t want to see taxes go up or the water [fees], but right now it’s such a volatile time that we don’t know what we are going to have to do,” McDonald said. “We are not anticipating a tax increase, but I can’t say there won’t be within the next four years. You just can’t promise those things.”

She said she would like to hear from town residents when they have concerns “because you can’t fix things when you don’t know what’s out there.” She also would like to see increased attendance at council meetings.

The mayor serves a four-year term and receives $300 a month in compensation. Council members are paid $250 monthly.

Bosserman said the election results are unofficial until they are certified today by elections officials.

Less than 10% participation is troubling. Voting is what separates democracies for tyrannies. Berryville is fortunate in having few major problems and three well known and decent people running for office. We did not have a barbarian at the gate - but more should have exercised their foundational right. Because this Memorial Day we will remember thousands who died so that we would be free to vote - not kneel.

Gosh I think more people respond to social media postings on the local Facebook pages than vote in Berryville. Amen.