Bright Box Theater General Manager Josh Huff stands in front of a photo mural outside the building on the Loudoun Street Mall. 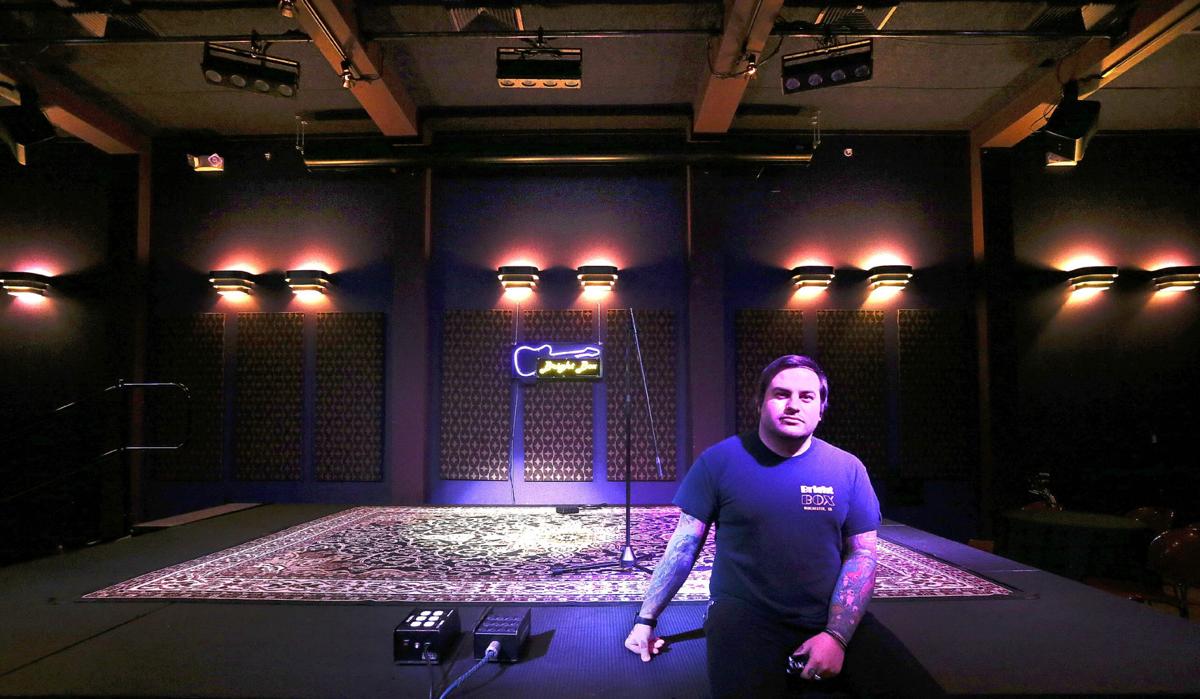 Bright Box Theater general manager Josh Huff sits on the empty stage at the theater on the Loudoun Street Mall in Winchester. COVID restrictions have been especially hard on live indoor music venues.

Bright Box Theater General Manager Josh Huff stands in front of a photo mural outside the building on the Loudoun Street Mall.

Bright Box Theater general manager Josh Huff sits on the empty stage at the theater on the Loudoun Street Mall in Winchester. COVID restrictions have been especially hard on live indoor music venues.

WINCHESTER — Since opening eight years ago, the Bright Box theater on the Loudoun Street Mall has hosted more than 1,000 live performances, but it hasn’t held one since March 13 — a result of the COVID-19 pandemic.

Although the downtown venue continues to be a location for private events, such as weddings and fundraisers, its days as a public performance venue may be numbered without financial support, says owner Marilyn Finnemore.

The Bright Box isn’t the only performance venue questioning its ability to continue amid the pandemic. In October, for instance, U Street Music Hall in Washington, D.C., permanently closed, citing mounting expenses and the inability to have indoor concerts due to COVID-19 restrictions.

A survey published in June by the National Independent Venue Association found that 90% of independent venue owners, along with promoters and bookers, said their venues will likely go out of business in the coming months without additional COVID relief from the government.

While Finnemore would welcome federal help, she’s also turning to the community for support by setting up a GoFundMe online fundraiser to raise $50,000 to keep Bright Box staff employed and to be able to book shows in the future.

She doesn’t like asking for help, but she doesn’t think the Bright Box will be able to reopen for public performances until next fall. The Bright Box did receive about $25,000 from the federal Paycheck Protection Program at the beginning of the pandemic, which went toward payroll.

Finnemore, who renovated the building complex that houses the theater after buying the property 12 years ago, says the space “for over 100 years really has been a gathering space for the community.”

Until the early 1980s, the building housed Leggett department store. Prior to that, the space was actually three separate buildings. The Bright Box is located on what used to be two floors of the department store. The first floor with the stage was the shoe department and the second floor, which Finnemore removed, housed the store’s business office.

Finnemore, who served eight years on the Old Town Revitalization Board, knew the downtown area was lacking an entertainment venue. She also knew she had the space to make one happen.

“I ended up financing it myself as kind of a gift to the community,” she said. “It’s very hard to make performance venues financially feasible, very, because it’s arts. We did the whole thing without any grants, loans or anything. It was privately funded. My husband and I funded it.”

The truly unfortunate part about COVID-19’s financial impact on the Bright Box, Finnemore said, is that the venue had just begun to turn a profit.

The venue was also starting to draw bigger acts. Comedian Gilbert Gottfried was set to perform there this year, but COVID-19 resulted in the show being canceled.

Josh Huff, Bright Box’s general manager, has worked with the venue since its opening in 2012. For Huff, losing a live event space such as the Bright Box would be a big loss for local performers, particularly musicians.

“The thought of losing that is immeasurable,” he said.

Huff grew up playing bass in bands and booking shows for music groups in Winchester even before the Bright Box came into existence. Finding spaces for these local bands to perform typically led musicians to rent a local VFW hall or play in a basement.

“The capacity to put on a large-scale production or to entice a band that you wanted to see come to town was a lot harder,” he said. “So growing up, there was always that need.”

He realized there wasn’t a spot to facilitate the growth of the local music scene.

Jordan Joyes, who plays guitar and sings for the punk-folk Gallows Band, grew up in Winchester and has always loved playing shows at the Bright Box. The band’s shows have sold out several times there. The last live show her band performed was in Hamilton, Ontario. The venue has since closed.

“It’s very near and dear to us,” Joyes said about the Bright Box. “It means the world to us to have a local venue like Bright Box that supports artists the way that they do.”

Losing it would be “devastating,” Joyes said.

“It’s just a room full of love,” she said. “It always just feels like a big family reunion every time we play, and there’s nothing like it. Nothing compares to it.”

To donate to the Bright Box’s online fundraiser, visit https://www.gofundme.com/f/support-bright-box?utm_source=customer&utm_campaign=p_cp+share-sheet&utm_medium=copy_link_all

I donated proudly, weeks ago. Hope many more join in.

Private support is best. Look what happens when government money gets involved; to wit: NPR

They would appreciate your support. How much can we put you down for?

Bright Box deserves the financial support of our community and from the collective government. The renovation is as spectacular as the performances. Bright Box serves a cultural and recreational need in the community that will be lost without them. Frankly, it is a true bright spot in downtown and particularly on the mall. Marilyn keeps prices more than reasonable so everyone can enjoy in any manner they desire. The staff is always professional and courteous. Bright Box should be considered with the reverence that historic properties receive. Don’t allow this necessary institution to pass away.

Bright Box fills such a vital need in our community. Losing it forever would be devastating and create such a void in downtown winchester. I don't have much, but will do what I can to support Bright Box during these trying times. I hope we can all pitch in and keep this shining beacon for live performances alive for many years to come. Thank you, Bright Box, for all that you give to this community.