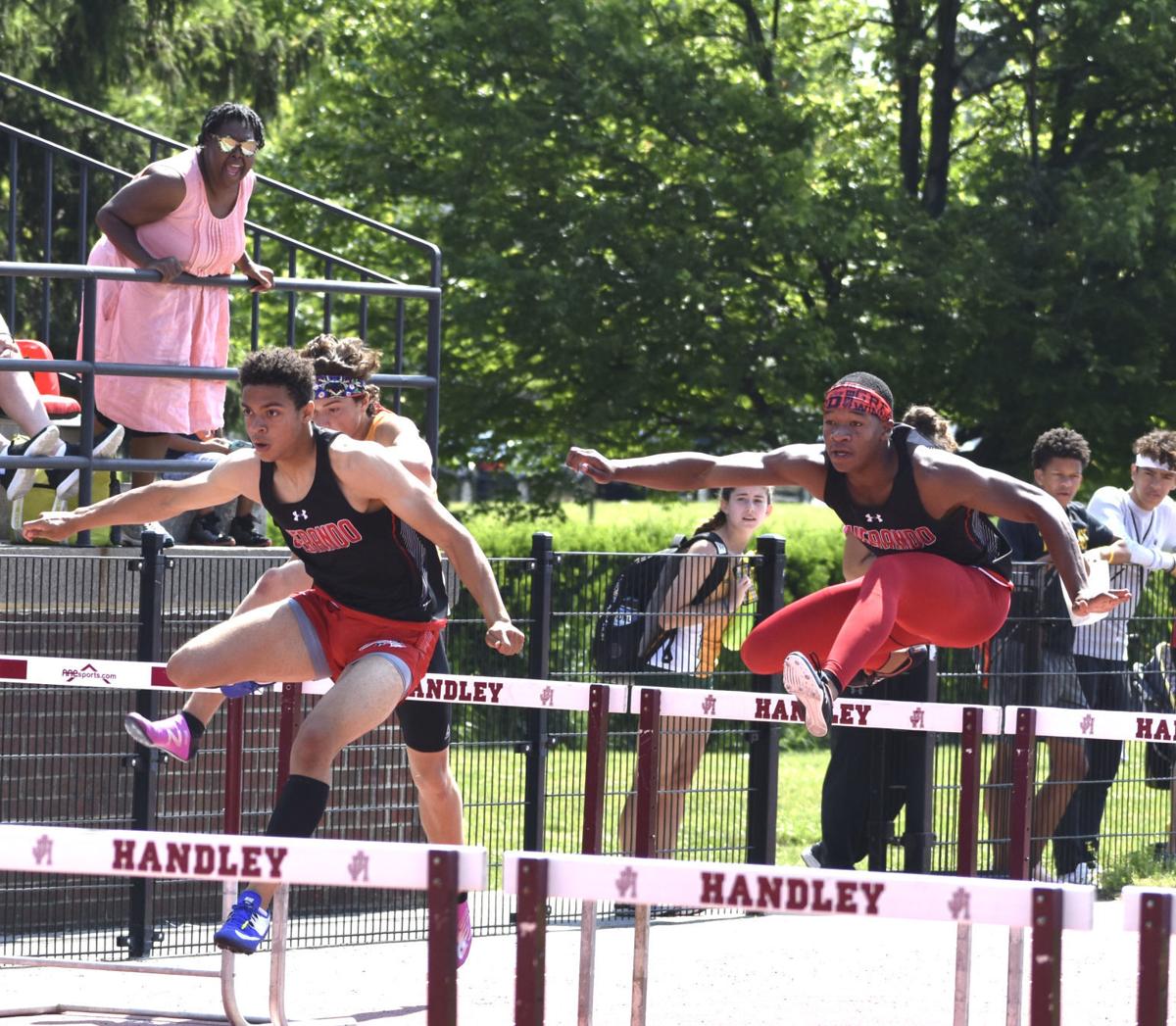 Sherando seniors Eldon Agard (left) and Darius Lane were looking to return to the Class 4 state meet in the 110-meter hurdles this year. 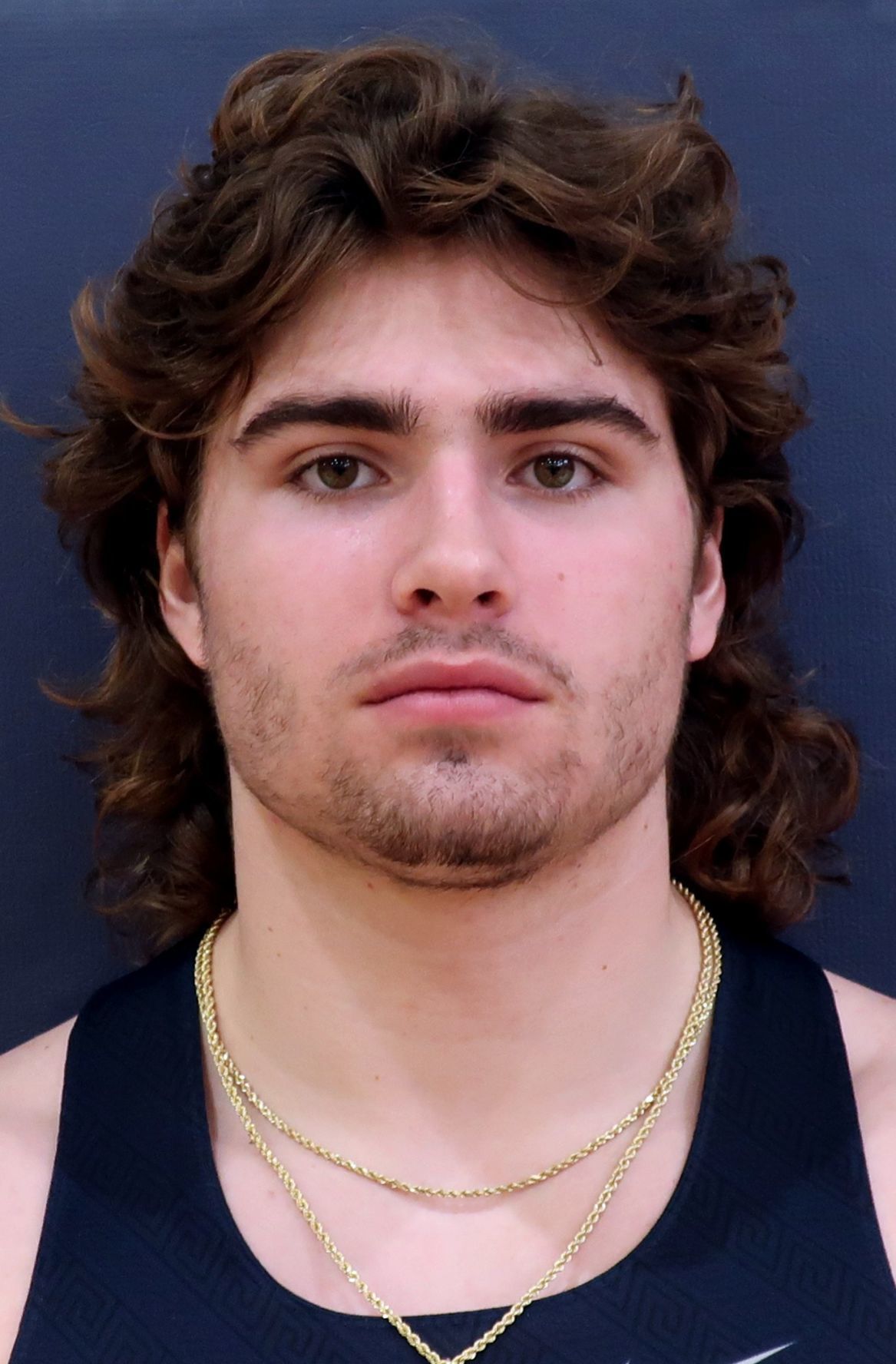 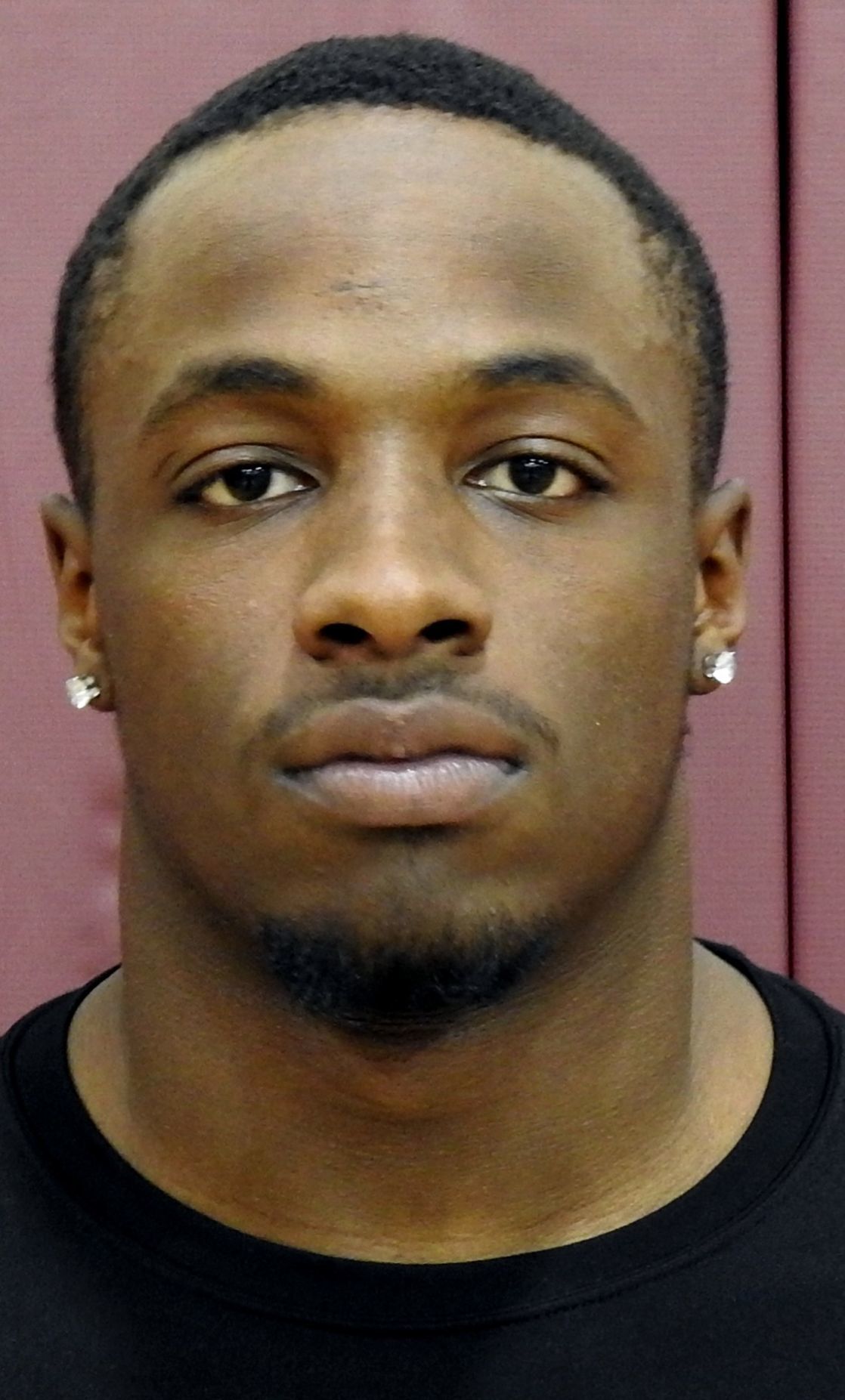 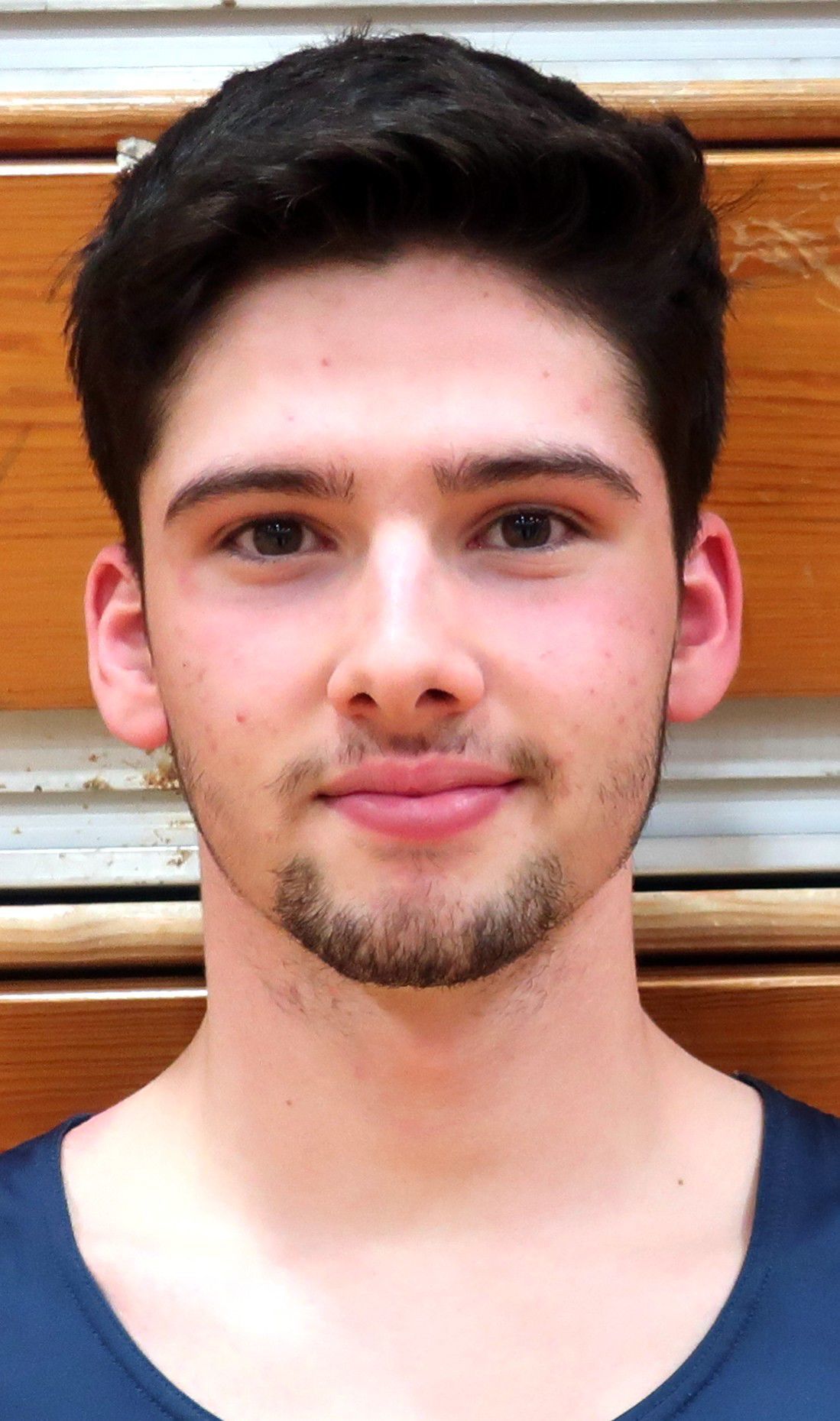 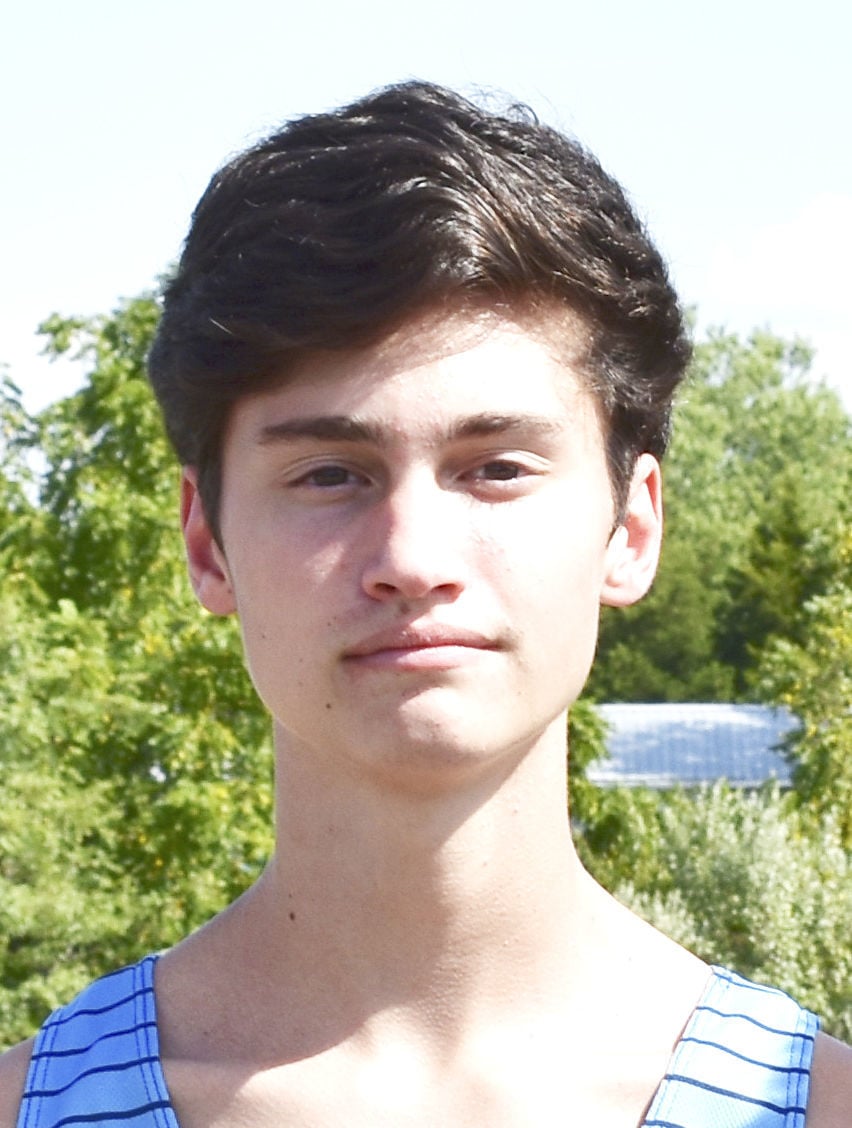 With spring high school sports canceled because of COVID-19, The Winchester Star is publishing a series of stories highlighting each spring sport. One senior from each team is being interviewed to provide their perspective. Today’s sport is boys’ track & field.

Agard didn’t get any all-state (top eight) honors at last year’s Class 4 outdoor meet, but he didn’t miss by much. He placed ninth in the 300-meter hurdles, 11th in the 110 hurdles and 16th in the triple jump.

Agard thought his best chance of doing so this spring would have been in the 110 hurdles. Agard (15.84 seconds) was just 0.19 away from making the state finals last year. Only four people in the state preliminaries had a faster time than his personal record of 15.39. Agard was also eyeing Kyle Holliday’s school record of 15.13 set in 2018.

Agard said his most memorable track moment came in the 300 hurdles at last year’s Region 4C meet. Agard took a more than respectable fourth in 41.37, but he felt it could have been better.

“I clipped the last hurdle,” Agard said. “I was hesitating a lot in that race. I realized I should always go strong.”

“They’re always pushing me,” Agard said. “I always have fun with them. Darius is like a coach and a teammate all in one.”

Agard first started competing in track as a sophomore for indoor season but didn’t start outdoor track until he was a junior. He played baseball as a sophomore. Agard did at least get one all-state medal, taking eighth in the 55 hurdles in indoor track this year.

“[Competing in track for Sherando] was a great experience,” said Agard, who will attend Lord Fairfax Community College and study cybersecurity, then wants to transfer George Mason. “I wish I had done it all four years.”

Rutherford is best known for what he does on the football field. One of the most prolific running backs in school history will be a preferred walk-on for NCAA Division I FCS power James Madison University next year and will major in kinesiology.

He feels a strong connection with the sport of track that he took up as a sophomore, though.

“I really fell in love with it and really appreciated it,” Rutherford said. “It’s a lot different from all the other sports I’ve played in my career.

“I’m going to miss the friends I made, and seeing people do well and break school records.”

Rutherford — whose football season was cut short five games in because of a fractured fibula — had his sights set on a school record in track.

Rutherford started putting the shot as a junior, and he had a personal record of 45-7 in 2019. He tied for ninth at the Class 2 state meet with a mark of 43-3, just six inches from eighth place and all-state honors.

With his increased strength and the extra work he was putting in — Rutherford started working on his technique before the official start of spring practice — Rutherford was hitting 50 feet in practice, a mark only three people surpassed at last year’s Class 2 state meet. Rutherford was also hoping to challenge Hilton Morgan’s school-record of 52-11.5 set in 2010.

Rutherford said his favorite track memory came at last year’s Millbrook Last Invitational. The Eagles made a late change to their 4x100 lineup and qualified for the state meet with a time of 44.55, almost a full second faster than their seed time. Every other school in the seven-team race was Class 4 or larger, and the Eagles took second overall out of the slower heat.

“We had a really good run, and that was a pretty exciting moment,” Rutherford said.

Rutherford said he was looking forward to this year’s state track meet not just so he could compete, but also so he can hear what all the seniors had to say about their track careers.

“The day before we go to the state meet, we meet in a group and the coaches let the seniors say a few words about their [track] experience, and why they love [competing in] track,” Rutherford said. “It sucks we’re going to miss it because it was a pretty cool experience hearing the seniors talk the last two years.”

The defending Class 4 state champion in the discus, Newman hoped to repeat and make another appearance at the New Balance Outdoor Nationals. The accolades weren’t what he wanted most, though.

“I was just hoping to improve,” said Newman, whose top mark of 168-0 broke the school record of 167-1 set in 2006. “What I remember most about track is the grind. Putting in the work. Then, when the track meet comes, it’s showing. All the work you put in shows up at the track meet.”

Newman also looked like was going to make more noise in the shot put this year. Newman placed fourth with a mark of 49-5 at this year’s state indoor meet, an improvement on his top mark of 49-2 last spring.

Newman enjoyed being part of a stellar senior track class for Handley as well. The Judges had several upperclassmen and underclassmen back from last year’s team that placed fourth at the state meet.

“One of the things we talked about was how good we could actually be,” Newman said. “The track team, the group that we had this year, was pretty bomb.”

Handley had the state’s best crop of sprinters.

“It was a real sight, always, every time they ran. I wish I was out there, to be honest with you,” said Newman, whose impressive wheels on the football field helped him wrack up an area-best 114 tackles as a middle linebacker in the fall. “It was exciting.”

In addition to playing football Newman will also throw at Emory & Henry, where he’ll study athletic training. He’s glad his track career isn’t over, and he’s glad he got to compete in the sport for Handley.

“It means everything,” Newman said. “I’m devastated that it ended like this. But it is what it is. I’ve got to continue to grow and move on.”

After qualifying for the Class 4 state indoor meet in long jump and triple jump this year, Owens was looking forward to another strong outdoor season.

Last year’s 4x400 team ran an area-best 3:29.60, but Owens thought this year’s team had more potential. Freeman — the area’s top 400 runner — is back, and the Colonels added his younger brother Chris Morrison, a freshman, and transfer Mi’keguel Franklin, an indoor state qualifier in the 300.

“In all the practices, we were working really hard,” Owens said. “We were really pushing to do the best we can do, and we were just hoping that it was going to pay off for us.”

Owens said getting to compete at states last year with the 4x400 team is his favorite track memory.

“We ran our best time, and it just felt really good to know we all did the best we could possibly do,” Owens said.

Owens — who will study exercise physiology at Shenandoah University and possibly compete on the track team — said he appreciates the bond that the senior class had.

“It’s kind of like a family, almost,” Owens said. “At school, we would always say ‘Hi,’ to each other all the time. We had just gotten really close to each other.

“I’ve made a lot of memories over the years with the entire team that I’m never going to forget. It’s just a bummer this year not to able to compete with the team.”

Simonelli said he had a strong connection with the senior class and the team as a whole.

“I really liked everyone on the track team,” he said. “We all just fit together really well and had the same goals. We would challenge each other to get out there and do what we need to do, and there was always someone there to help you. Everyone tried their hardest every day.”

Simonelli felt good about the Millbrook 4x800 team’s chances of qualifying for the state meet. Simonelli and Schroer were back from the team that finished 11th in the state in 2019, and he thought Johnny Wiseman and Carter Johnson would make that relay formidable again.

“Going to the state meet last year was by far most favorite memory,” said Simonelli, who is undecided on his college choice. “I had a lot of time to hang out with everyone who went there, and focus on my racing. And everyone cheered us on. It was just a different experience [than a regular meet].”