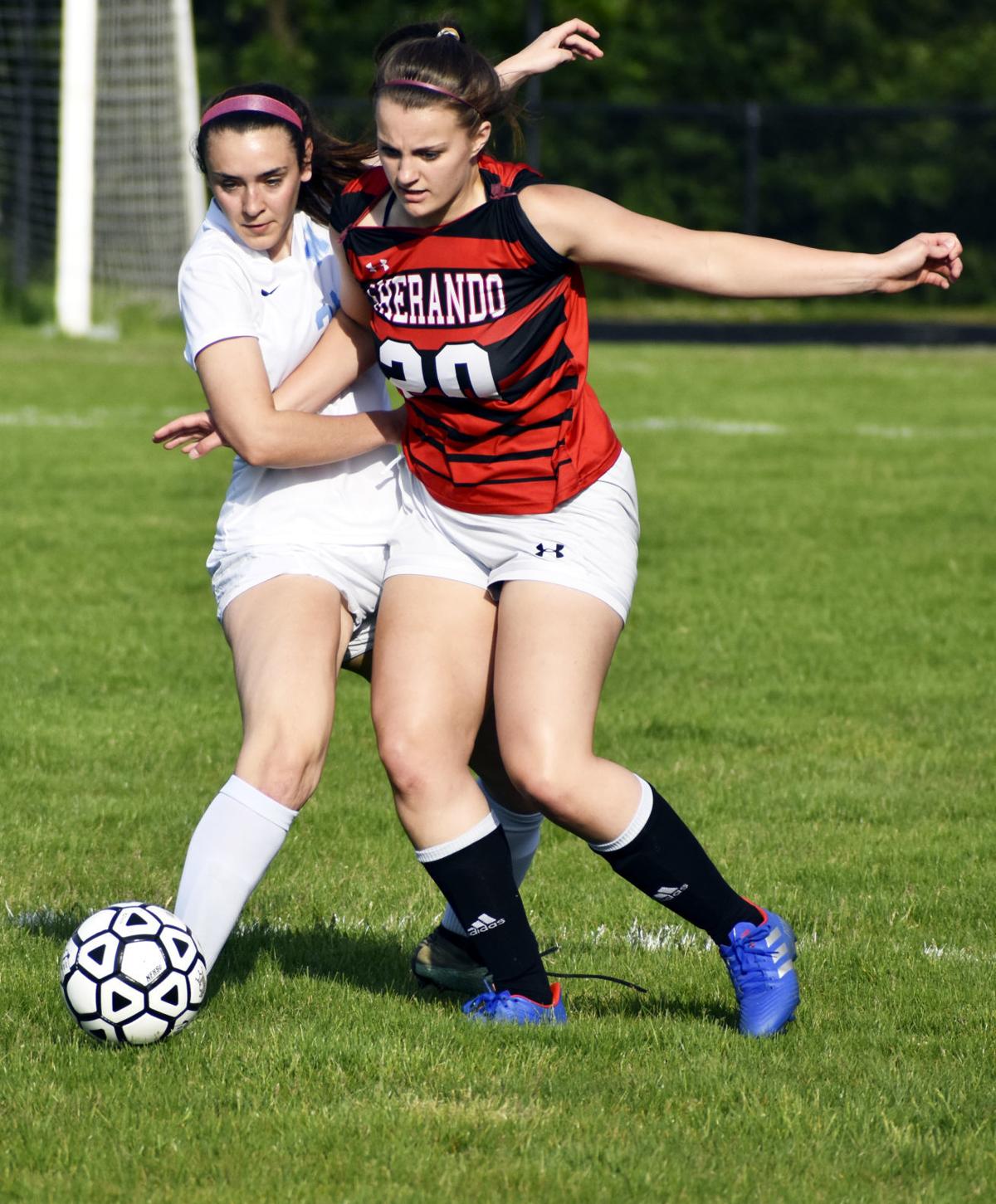 Abbie Dodson (right) is one of six seniors on this year’s Sherando girls’ soccer team. 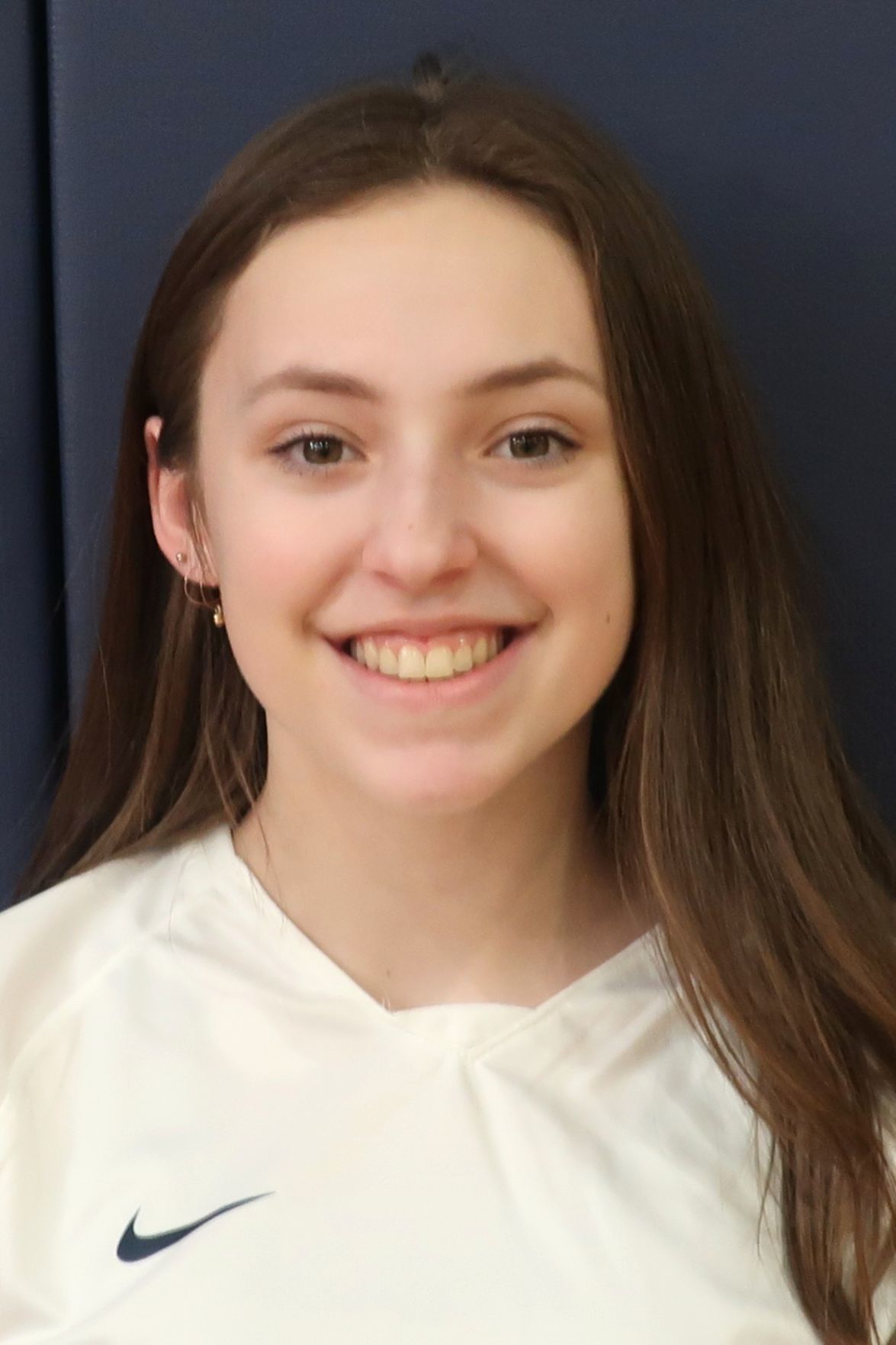 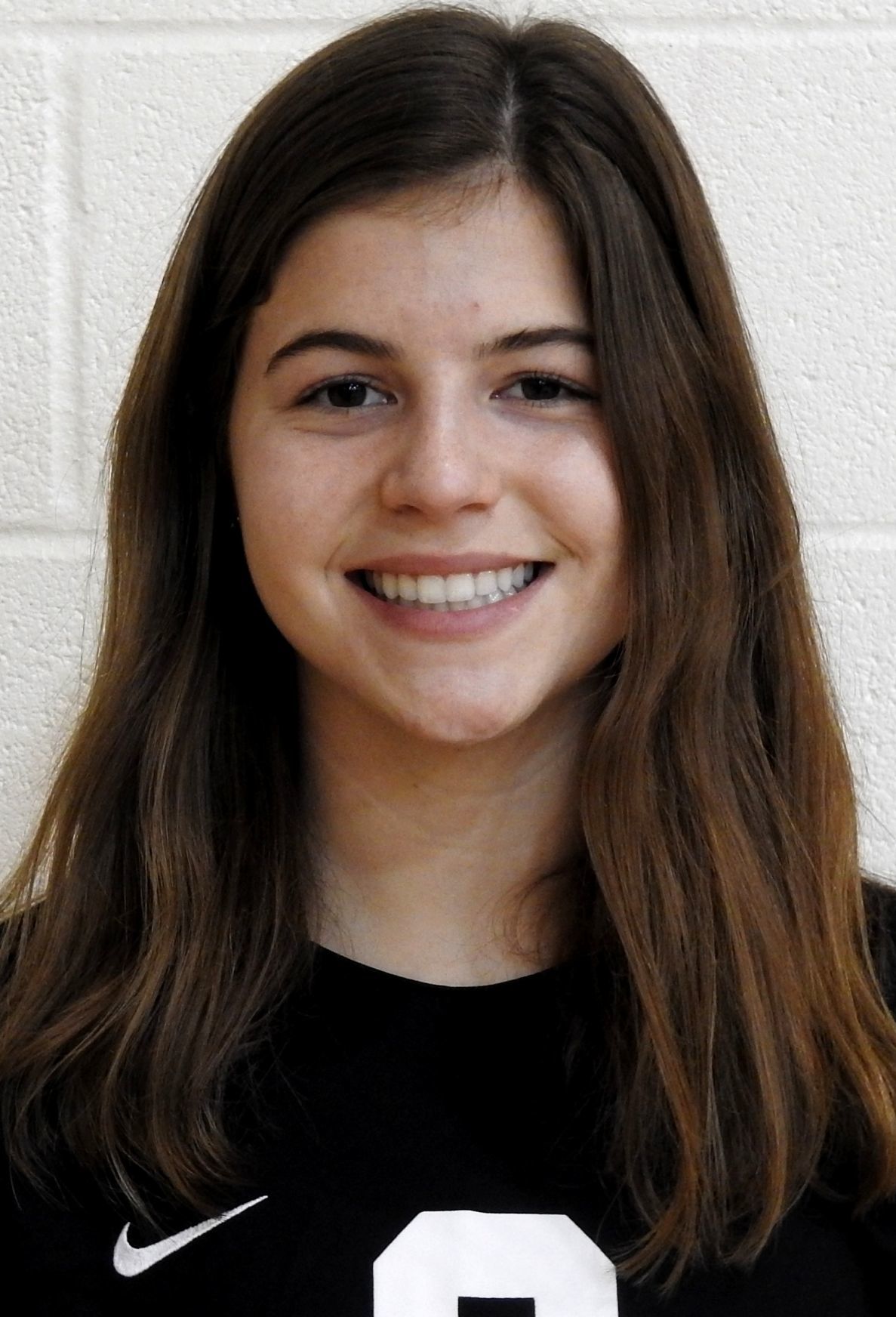 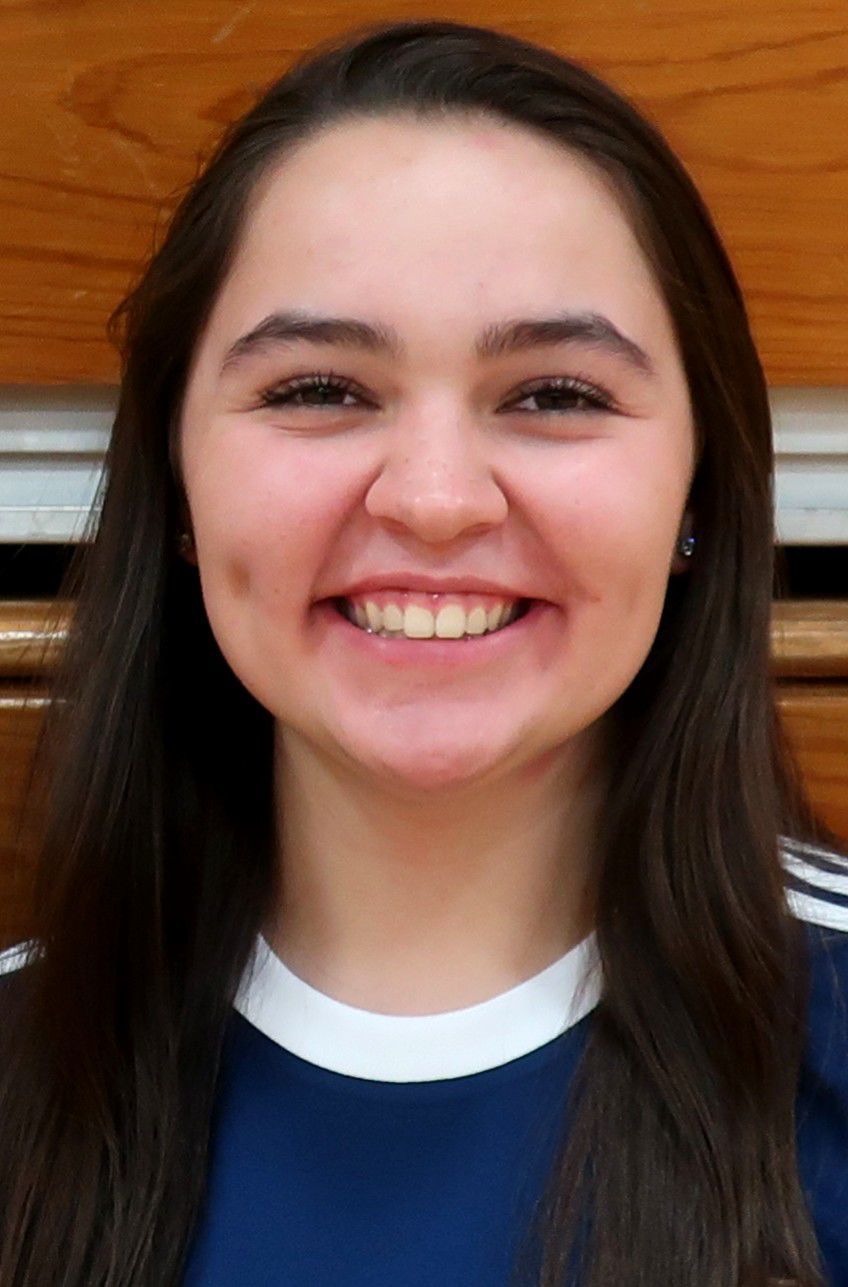 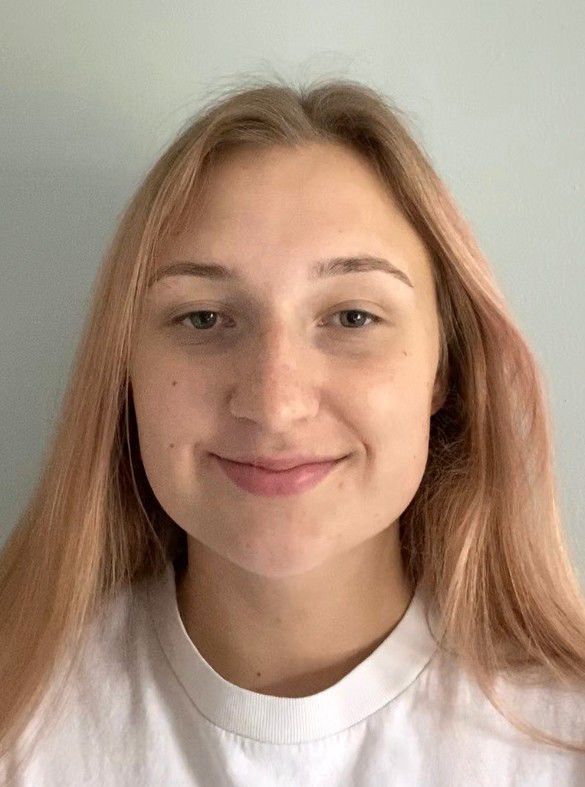 With spring high school sports canceled through the end of the school year because of COVID-19, The Winchester Star is publishing a series of stories highlighting each spring sport. One senior from each team is being interviewed to provide their perspective. Today’s sport is girls’ soccer.

With seven starters back from a team that went 12-5-1 last year, there was plenty for the Warriors to look forward to this season.

A couple of seniors who were going to play in games for Sherando for the first time this season had Dodson particularly intrigued. Unrath is a transfer from Warren County who is going to play for NCAA Division I Longwood University next year, while Valeria Castillo was finally set to make her regular debut after transferring from Herndon High School as a junior. Castillo did not play last year because of a knee injury.

“I was super excited, because we get along really great,” Dodson said. “Even though I haven’t known them for all four seasons like I have Ali and Jolie, we’re still just as close.”

Dodson said she and Call played together in recreation league play when they were in Kindergarten, and she began travel soccer with Baltimore in fourth or fifth grade.

Dodson was the only captain on this year’s Warrior team.

“I’ve been starting on varsity since freshman year and working really hard, getting to know the program, and growing up with certain girls,” Dodson said. “Freshman year, I really looked up to Taylor Fogarty and Megan Triplett. They were kind of role models. I was looking forward to being a really good captain like them.”

Dodson said her freshman year featured her favorite memory for the Warriors. In her first game, she was in the center of a starting defense that also featured upperclassman Lauren Heskett and Hannah Li. Dodson said she was nervous, but they kept her loose by making her laugh, and Sherando won in a shutout.

“I had a lot of fun,” Dodson said. “[That game] kind of set the tone for the next four seasons.”

Dodson said Sherando always sets its goals high, and she thought this team might have had a chance to break through and make the state tournament for the first time in school history.

“Sherando always has really good talent, but we never quite seem to make it,” Dodson said. “But I think the chemistry of this team was a little different, and we all felt it. It’s kind of a bummer we didn’t get to see how far we’d go.”

Dodson might have lost a large chunk of her final season, but she’s certainly glad she had the experience of her first three.

“It meant a lot to me,” said Dodson, who will attend Virginia Commonwealth University and double major in biomedical engineering and nuclear engineering so she can work with counterterrorism efforts. “I enjoyed the way the program was run and the coaching staff. I liked getting to know [Head] Coach [Rob] Kilmer and both [Assistant] Coach Gladdens [Stephanie and Patrick].

“Sherando soccer has always been like a family to me. No matter what we go through, all the wins and losses, we always have a good time and lots of fun memories. I’ll take those with me for the rest of my life.”

With state power George Mason no longer in the Bull Run District this year, Zimmerman was interested to see how the Eagles might match up as they looked to improve on last year’s 8-10-1 record. Zimmerman was part of a defense that returned all four starting defenders and starting goalkeeper Emma Rogers.

“I think we were going to be good this season,” said Zimmerman, who was named a captain this year. “We had a really good bond. Our team was small [16 players] so we all kind of get along.

“Our defense was solid. We were exactly the same as last year, so we knew how to play with each other.”

Zimmerman said Nedjar — the team’s only other senior — might not have played this year because of injury.

“We’re friends,” said Zimmerman, who’s played on recreation teams with Nedjar since they were young. “It’s sad that she couldn’t play with me.”

Zimmerman said her favorite memory with the Eagles was the run the team made to the Class 2 state quarterfinals her sophomore year. Clarke County was led by future NCAA Division I soccer players Danielle Toone (Longwood) and Sydney Staples (Lehigh) that season.

“It was fun [playing for Clarke County],” said Zimmerman, who will attend a Paul Mitchell School to work with hair after graduation. “I only played travel my freshman year, so high school was the only time I got to play soccer. It was great to do that after school, and be with friends.”

Handley’s senior class was a small one, but a tight one.

“I think we really bonded over the past couple of years,” Sydnor said. “I just wish them the best as they go on to college next year, especially with Emma as she plays soccer at [Christopher Newport University]. I look forward to seeing her stats next year and seeing how she does.”

Sydnor and the Judges (15-4-3 last year) were hopeful that they could make a state tournament run after winning the Class 4 Northwestern District and coming up one game short of states last year. But she feels Handley has the talent in the program to make it happen

“I trust that anything we had hoped to accomplish this year will definitely happen in years to come,” Sydnor said.

Sydnor said she wants to play a role in that by passing on her knowledge of the game. Sydnor spent her first two years learning from Amanda Kesler — the starting goalkeeper for NCAA Division III national finalist William Smith — and she wants to do the same for her freshman backup this year, Emma Westfall.

“Training with [Kesler], she taught me so much,” Sydnor said. “She brought goalkeeper coaches she trained with to our practices, and that meant so much to me. I hope to share my experiences with Emma like Amanda did with me. Maybe this summer I’ll get to do that once quarantining let’s up a little bit.”

Sydnor — who will study engineering at the University of Virginia — said she definitely appreciates the time she spent playing for Handley.

“I feel like it really just made my high school experience really well-rounded,” Sydnor said. “I enjoyed every moment of it, even conditioning. I’m really sorry that I was unable to finish the season with two new coaches in [Head] Coach [Haleigh] Echard and [Assistant Coach] L.A. [St. Hill]. I know that they’re so experienced, and I’m so impressed with how they coach. I think they’ll have some great years to come.”

A first-year varsity member for the Colonels, Riggleman couldn’t help but be impressed with the connection this year’s team made in the preseason.

“Our team was really like a group of sisters,” said Riggleman of a group coming off a 14-5-1 season. “I know a lot of teams say that, but we really meant it when we said it.”

Riggleman said her favorite memory for the Colonels was when she was a sophomore and James Wood beat Handley in overtime.

“Our entire team, our bench, to even our parents in the stands who traveled with us to go watch us play .. everyone was so excited,” Riggleman said. “It felt pretty good.”

Riggleman is going to study forensics and investigative sciences at West Virginia University next year. She’ll carry her James Wood soccer experience with her.

“The feeling I got being on the team, it compares to really nothing else,” Riggleman said. “I have lifelong friends now. I’m just never going to forget the whole experience.”

Nail said she and Henning had to organize the Senior Night for last year’s team, and that created a stronger connection between the team’s only seniors.

“I think that’s when Mikaela and I started to figure out how to work well together,” Nail said. “That slowly progressed through workouts happening in the indoor season. Our whole thing was being leaders, and being someone the players can talk to.”

Nail said her favorite memory playing for the Pioneers was last year’s home game against Kettle Run when the Pioneers scored to temporarily tie their game with defending district champion Kettle Run at 1-1.

Nail — who will study environmental science at Virginia Wesleyan — said she was looking forward to seeing Millbrook try and improve on last year’s 3-12-2 season.

“Playing at Millbrook has helped me become a more confident player in that even though we didn’t always have the outcomes we wanted, we always tried our hardest,” Nail said. “We always grew. And I think this year we would have showed that. This year would have been different for us and a whole new outcome.”