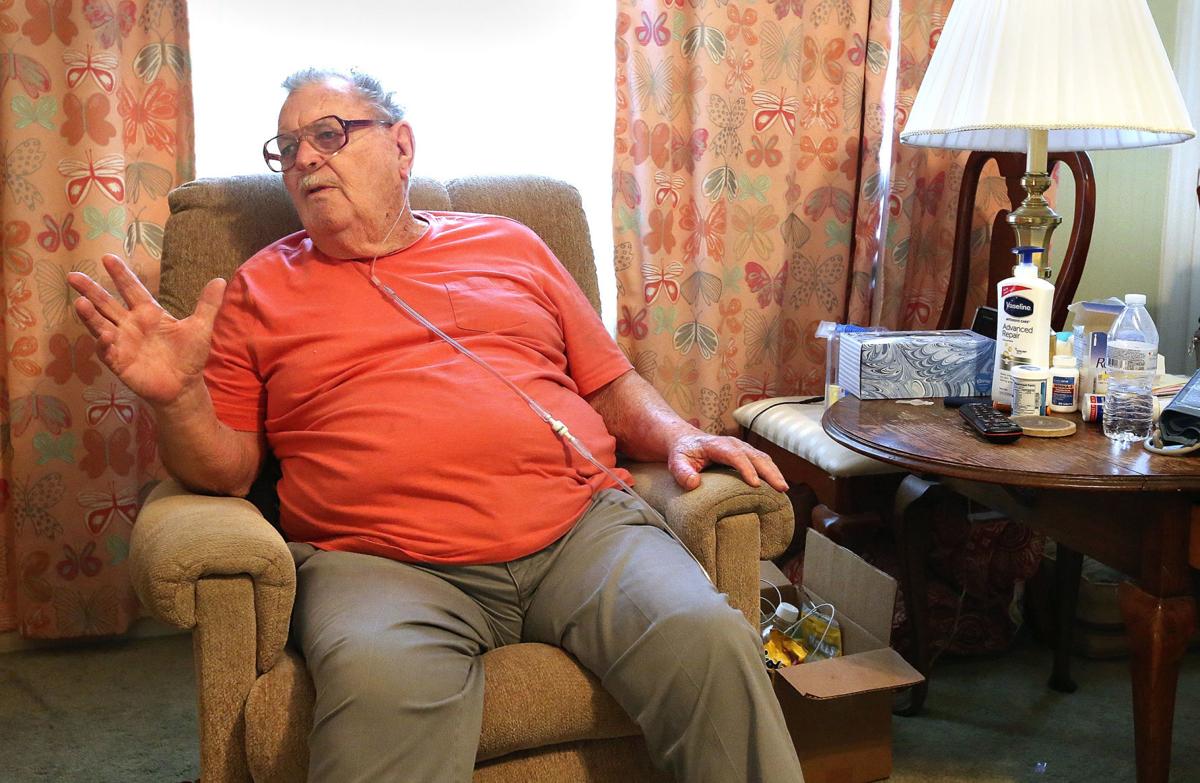 Carl Stohl Jr., 86, of Stephenson, a Navy veteran who served in Korea, talks about surviving the coronavirus while recovering at home Wednesday. 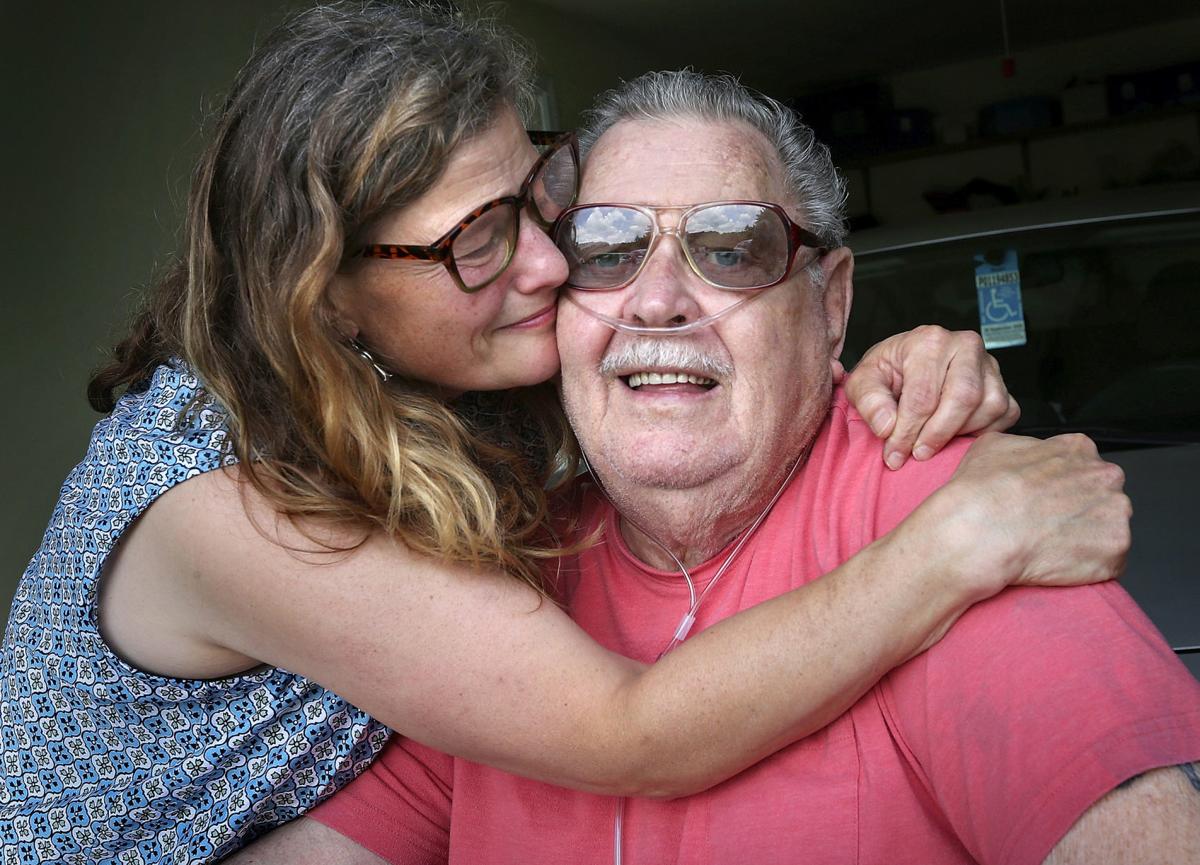 Carl Stohl Jr., 86, of Stephenson, gets a hug from his daughter, Mary Lind, while recovering at home Wednesday after surviving the coronavirus infection. Stohl, a Navy veteran who served in Korea, spent three weeks in the Veterans Administration Hospital in Martinsburg, W.Va., while getting treated for the virus.

Carl Stohl Jr., 86, of Stephenson, a Navy veteran who served in Korea, talks about surviving the coronavirus while recovering at home Wednesday.

Carl Stohl Jr., 86, of Stephenson, gets a hug from his daughter, Mary Lind, while recovering at home Wednesday after surviving the coronavirus infection. Stohl, a Navy veteran who served in Korea, spent three weeks in the Veterans Administration Hospital in Martinsburg, W.Va., while getting treated for the virus.

But if you think you’re reading his obituary, you’re wrong.

Stohl, a Navy veteran who served in the Korean War, is back home after spending three-and-a-half weeks in the hospital.

Stohl was raised in Mount Pleasant, Pennsylvania, a coal-mining borough about 40 miles southeast of Pittsburgh. He enlisted in the Navy in 1951, when he was just 16 years old, and soon after found himself firing artillery from a ship off the coast of Korea.

When his military service ended in 1955, he returned home and became a bricklayer. His skills eventually brought him to Frederick County, where he also learned to be a stone worker and contributed to multiple projects including the construction of St. Bridget of Ireland Catholic Church near Berryville.

“Have you seen those stone arches?” he asked. “I did all of them.”

Stohl and his wife of 42 years raised six children — five sons and a daughter — before she succumbed to breast cancer in 2001. About two years later, he was hanging out at Charles Town Races in Charles Town, West Virginia, when he met the woman who would become his second wife. In 2017, the couple was enjoying a day at the track when she suffered a massive heart attack and died.

Stohl dealt with his grief by playing cards with friends and watching the horses run at Charles Town Races. That all stopped in March, though, when COVID-19 forced him to self-quarantine at home.

By late May, when Virginia was preparing to relax its social-distancing restrictions by entering into Phase 2 of the commonwealth’s coronavirus recovery process, Stohl decided to take a risk and leave his house for a few hours. During that short period of time, he apparently encountered someone who carried the COVID-19 virus.

The next day, Stohl started feeling sick. He didn’t think too much about it at first, but as he grew more ill over the next four or five days, his daughter, Mary Lind, insisted he get tested for the coronavirus at the VA clinic in Stephens City.

“They put that thing in my nose, then told my daughter to take me to the emergency room,” he said.

Lind drove Stohl to the VA Center in Martinsburg, where her father was promptly admitted into the intensive care unit (ICU). He was kept in isolation and only allowed to speak to family members using FaceTime.

Lind braced herself for what she believed would be the inevitable outcome.

“We had to make his end-of-life decisions,” Lind said, adding that she was devastated to think she wouldn’t be able to stand at her father’s bedside and tell him goodbye. “It was very scary. He was very sick.”

But Stohl was stubborn. For five days, he rode out waves of nausea while being treated with the antiviral medication remdesivir.

“After I did that, they gave me [blood] plasma [that had been donated by a COVID-19 survivor],” Stohl said. “Then I started to feel better.”

Defying all expectations, Stohl was transferred out of ICU after two-and-a-half weeks. He spent another week on the VA Medical Center’s community floor, then went home.

“The doctor said she had never seen another 86-year-old man with as strong an immune system,” he said.

Stohl, who says he can’t remember everything that happened in the hospital because he was so ill, credits his recovery to the caregivers at the VA facilities in Martinsburg and Stephens City, particularly the nurses who tended to him in ICU.

“They treated me good,” Stohl said. “I’ll never forget it.”

For example, the ICU nurses knew Stohl was not a fan of the VA Medical Center’s food, so they started spending their own money to bring him breakfast every day.

“They snuck in contraband,” Lind joked. “They knew it was good for his morale, and he needed that.”

On June 25, discharge day, VA Medical Center staff lined the halls, waved homemade signs and cheered for Stohl as he was wheeled out of the building.

His lungs are still a bit congested, so he’ll be using an oxygen tube to ease his breathing for another month or so. Otherwise, Stohl appears to be perfectly healthy, a good 20 years younger than he actually is.

Lind, an employee of the Jefferson County school system in West Virginia, has been working from her dad’s house recently so she can keep an eye on him and help with his care.

“Every day, he’s been getting stronger and stronger,” Lind said. “We’re doing small things every day to make sure he can be here without somebody.”

Stohl knows at least part of his recovery was due to the transfusion of plasma from a COVID-19 survivor who had developed antibodies to the virus, so he’s eager to return the favor. In another month, he should be healthy enough to donate plasma, “which I’m gonna do.”

But what he’s most looking forward to is getting back to Charles Town to bet on the ponies.

“I can’t wait to go down to the track!” Stohl said enthusiastically.

Congratulations of beating Covid19 and being able to return home. Also,THANK YOU, for service in serving our Country. God Bless to you and your family.

Way to go Carl! So happy you are doing better; I was worried about you!

A fan from Clearbrook Shopping Center.

Mr. Stohl, thank you for your service protecting our country and I am glad you survived this deadly virus. God bless you.