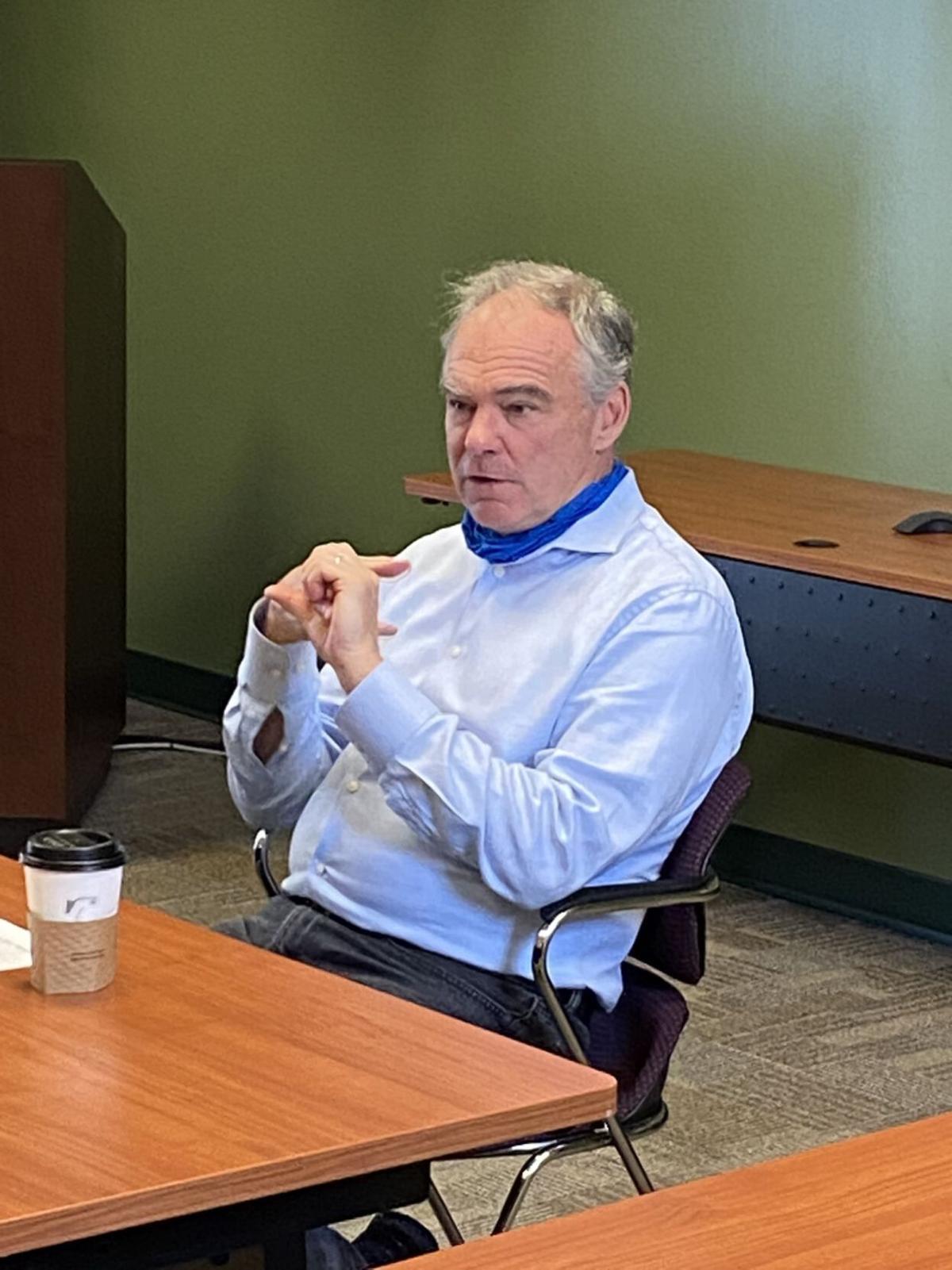 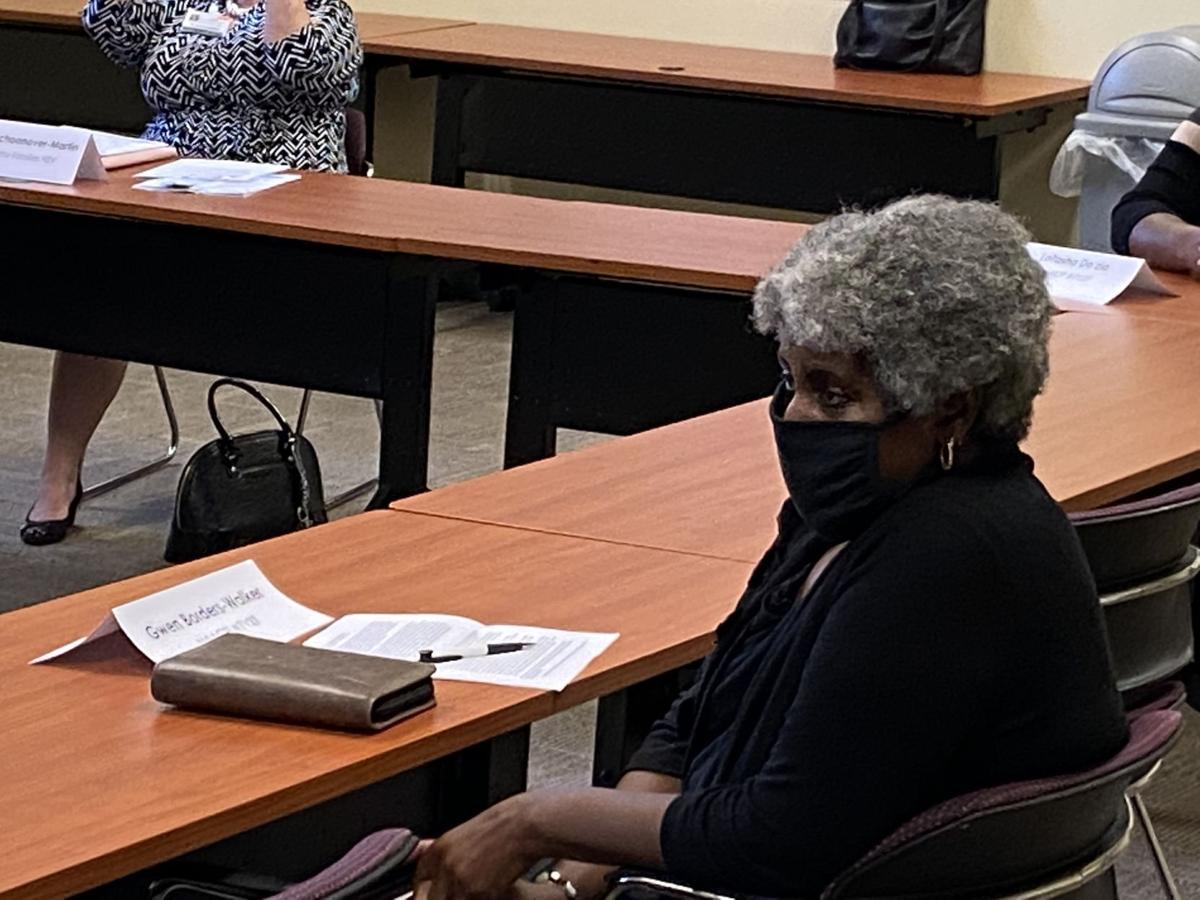 Local NAACP member Gwen Borders-Walker talks with Sen. Tim Kaine about disparities Black communities face when it comes to maternal healthcare. She recalled her own mother not receiving much prenatal care.

Local NAACP member Gwen Borders-Walker talks with Sen. Tim Kaine about disparities Black communities face when it comes to maternal healthcare. She recalled her own mother not receiving much prenatal care.

WINCHESTER — African American mothers and infants are more than twice as likely to die during or shortly after pregnancy than their white counterparts, and Sen. Tim Kaine, D-Va., said he’s determined to reduce those inequities.

Kaine met with several stakeholders in Winchester on Friday to discuss racial and geographic disparities in maternal health. The discussion, which took place in the Our Health Building at 329 N. Cameron Street, dove into the challenges African American women, infants and families face during pregnancy and into the first year after birth.

LaTasha Do’zia, a member of the local NAACP, said that as far as the Winchester community is concerned “there is a lack of OB-GYN of color” and that there isn’t a huge selection of choices for maternal healthcare. Do’zia said that nationwide there is often a lack of trust between the Black community and healthcare providers.

“As a Black woman, in this area in particular, when it comes to healthcare, you are not particularly heard,” Do’zia said.

Gloria Arroyo-Sugg, a Perinatal Behavioral Health liaison who works with women during pregnancy and postpartum, said that mothers who are also minorities understand that racial disparities exist, and that there often is a lack of diversity within maternal healthcare systems. The entire panel, which included Valley Health Vice President of Population Health Jeff Feit and NAACP member Gwen Borders-Walker, generally agreed that there needs to be more diversity and representation within medical facilities to ensure that women of all races are treated equally when receiving healthcare. There was also an agreement that there needs to be more diversity within higher education, including medical schools, as well as implicit bias and sensitivity training for healthcare workers.

Lord Fairfax Health District Director Dr. Colin Greene said he wants data that reveals why Black infants are more than twice as likely to die as white infants, but acknowledged the challenges of doing so.

“You can say ... there’s racism,” Greene said. “Nobody denies it exists. But try to get two people to define it the same way and then try to manage it. It’s pretty hard.”

Greene said there needs to be a central site where data is tracked and posted and easily accessible. Kaine agreed, and said the data could possibly be organized by regions so there can be targeted interventions. Kaine also said that there needs to be outreach and education efforts to let mothers, particularly within the Black community, know what resources are available.

Sara Schoonover-Martin, executive director of Healthy Families of the Northern Shenandoah Valley, said financial burdens are a likely factor as to why some Black mothers aren’t getting the prenatal care they need. She recalled meeting with one African American mother who, seven months into her pregnancy, hadn’t received any prenatal care because she owed a bill for a previous prenatal services and didn’t qualify for Medicaid.

In June, the CDC changed the list of at-risk populations of COVID to include pregnant women. Because of this, Kaine hopes to get the legislation included in the next stimulus package dealing with COVID relief.

Kaine said he believes his legislation, designed to reduce maternal and infant mortality, should have bipartisan support. It is unclear, however, whether it will be passed in the next COVID-19 relief package or if it will have better chances of success as a separate bill. The House and Senate have yet to agree on how expansive the next COVID-19 relief package should be.

“Right now the challenge is the scale of it,” Kaine said. “The Democrats have a price tag, where we think we need to do something pretty massive. And the Republicans, and in particular the White House, want to do something much smaller.”

Kaine has also supported a proposal to change Medicaid so it covers mothers not just for 60 days but for a year after they give birth.

Kaine said there was much as stake in the upcoming presidential election in regards to healthcare. The election could determine if the Affordable Care Act gets improved and built upon (as is the hope of Democrats) or eliminated entirely. Kaine said that while polling is strong for Joe Biden and Kamala Harris, the Democratic nominees for president and vice president, Democrats can’t be complacent.

FACT: Heart disease and stroke are the leading causes of all maternal death.

This FACT has nothing to do with "systemic racism" or this victimhood nonsense being pushed. Heart disease and strokes occur in unhealthy individuals, no matter what skin color.

So, the most basic question regarding pregnancy-related deaths include the physical condition of the female(s) before pregnancy. Heart-related diseases for a child-bearing female stem from obesity, diabetes, drug abuse, lethargy, heart defects, etc. Skin color has no bearing on these diseases.

Your "facts" are clearly a sad attempt to draw attention away from how this is clearly all Trump's fault! [lol]

Always missing from this specific subject: behavior of the ‘victim.’

I never thought you could cram that much bulls#&$ into one newspaper article.[thumbdown]

Disparities amongst stakeholders? The Left sure does love their jargon. Good thing minorities have so many white folk championing their "cause", because, you know, they can't do it themselves with so much societal oppression going on... [rolleyes]

The article is about women and children dying, but way to ignore that in favor of a political dig. :/

And, no, it really isn't. Not everyone is bedazzled by the Leftist magic show...

Doc, you can't really pay attention to mundane facts, figures and details, huh? If it doesn't send you in to a fit of rage, what use is it, amiright? Explains why you hide.