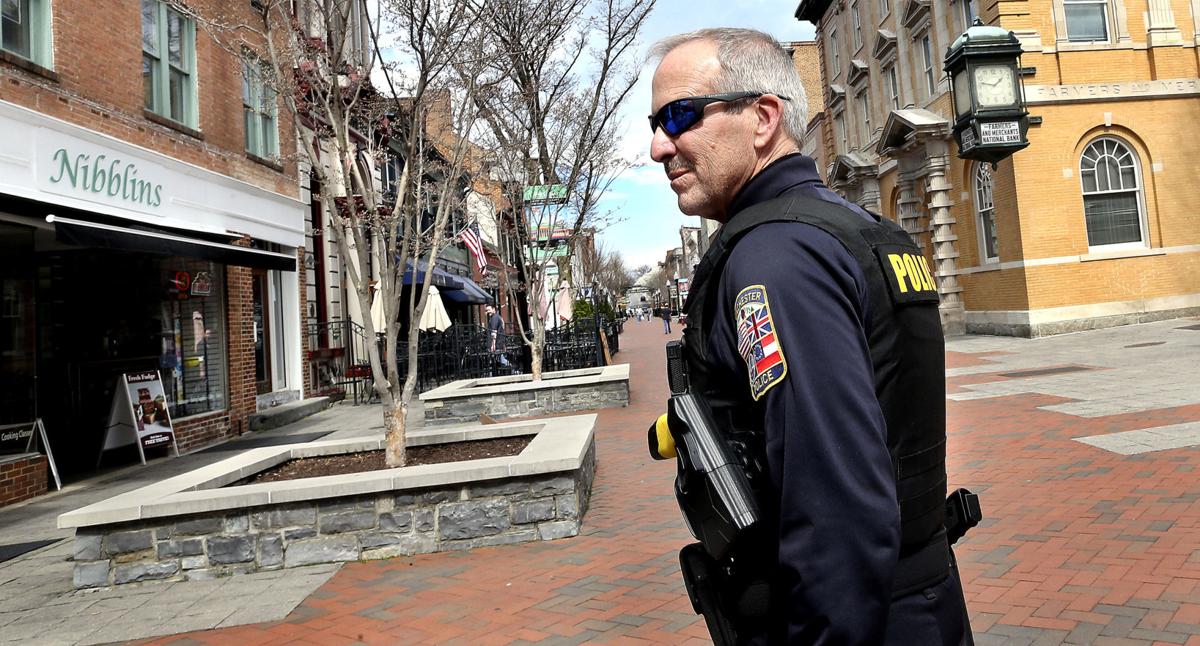 Winchester Police Cpl. Mark Lahman patrols the Loudoun Street Mall on Friday. To avoid spreading COVID-19, police are trying to limit arrests in which people are booked at the regional jail. Suspects in nonviolent crimes may be issued a summons instead, and prosecutors are encouraging judges to grant bonds and continue cases. 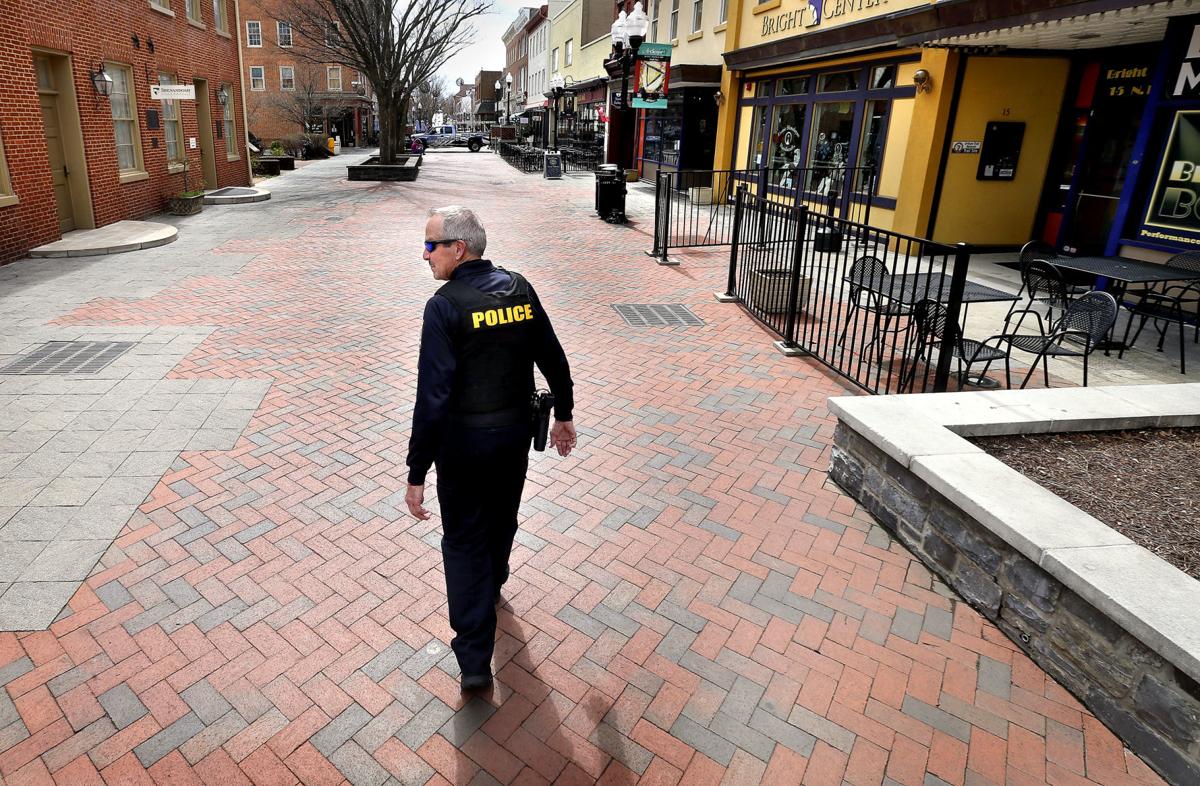 Winchester Police Cpl. Mark Lahman patrols the Loudoun Street Mall on Friday. To avoid spreading COVID-19, police are trying to limit arrests in which people are booked at the regional jail. Suspects in nonviolent crimes may instead be issued a summons, and prosecutors are encouraging judges to grant bonds and continue cases.

Winchester Police Cpl. Mark Lahman patrols the Loudoun Street Mall on Friday. To avoid spreading COVID-19, police are trying to limit arrests in which people are booked at the regional jail. Suspects in nonviolent crimes may be issued a summons instead, and prosecutors are encouraging judges to grant bonds and continue cases.

Winchester Police Cpl. Mark Lahman patrols the Loudoun Street Mall on Friday. To avoid spreading COVID-19, police are trying to limit arrests in which people are booked at the regional jail. Suspects in nonviolent crimes may instead be issued a summons, and prosecutors are encouraging judges to grant bonds and continue cases.

WINCHESTER — To avoid spreading COVID-19, law enforcers are planning to reduce the number of inmates at the regional jail while not jeopardizing public safety.

The effort comes after Virginia on Thursday asked local police to consider issuing summonses rather than arresting people for nonviolent crimes.

“This is an extraordinary time, and we are trying to be mindful of the health threat that comes with confining a large number of people in a relatively small space,” Frederick County Commonwealth’s Attorney Ross Spicer said on Friday “But paramount in our determination is ensuring that the safety of the public at large is nonetheless maintained.”

There are currently about 600 inmates at the Northwestern Regional Adult Detention Center, which has a maximum 850-bed capacity. The jail, located on Fort Collier Road, has a staff of approximately 185 including 140 corrections officers.

A court hearing is scheduled at the Joint Judicial Center at 9 a.m. on Wednesday, where Judge Alexander R. Iden will be presented with a list of 40 to 50 inmates to be considered for early releases, according to James F. Whitley, the jail’s superintendent. Whitley said the list will include nonviolent inmates age 60 and older with diabetes and lung ailments as well as pregnant inmates and inmates within 60 days of their release dates. Another 30 inmates on work release, who enter and exit the jail daily, are being considered for Home Electronic Monitoring where they wear GPS ankle monitors.

“It’s to keep the traffic in and out from happening,” Whitley said. “Or at least slow it down.”

Marc Abrams, Winchester commonwealth’s attorney, said his office is consulting jail staff. He said candidates will be considered on a case-by-case basis with their criminal history considered, with public safety is the top priority. “It depends on the individual,” Abrams said.

Anne Williams, Clarke County commonwealth’s attorney, noted her county has a low crime rate and summonses are often issued rather than people being arrested. She said magistrates have the final say on whether someone enters the jail or is released on bond. However, she said she is consulting with prosecutors statewide to see how different jurisdictions are developing COVID-19 protocols and is reviewing her cases.

“I don’t think you’re going to see a ton of changes, but I am, as a commonwealth’s attorney, very attentive to the situation,” Williams said. “This is something we’ve never experienced before. Unusual times call for things we never thought we’d have to consider.”

Frederick County Sheriff Lenny Millholland and Winchester Police Chief John R. Piper said they haven’t altered their agency’s arrest policies, but they are sensitive to the need to limit who is jailed. They said with many businesses closed and many people self-quarantining, arrests and calls for service are down significantly.

They said suspects in violent crimes will be jailed. So will people accused of failing to appear in court because they have proven to be flight risks. But they noted officers have always had discretion about issuing summonses for nonviolent offenses such as possession of small amounts of marijuana.

Besides being encouraged to issue more summonses, officers are also trying to limit face-to-face interaction with the public. Routine complaints are being handled by phone rather than in person, and officers are trying to maintain the six-foot distance from people that is recommended by the Centers for Disease Control and Prevention.

Officers have been equipped with personal protective equipment such as N95 surgical masks, gloves, hand sanitizer, Tyvek suits and gloves. The equipment will only be worn when appropriate and not for responding to routine calls.

Millholland and Piper said business owners have been good about obeying Gov. Ralph Northam’s order limit public gatherings to 10 people or less. Piper said officers are briefed daily on the latest safety recommendations and the department is ensuring that they have adequate protection.

“I feel confident that we are doing all we can to make sure that our officers are getting the best and most accurate information possible and that we’re equipping them to do their jobs so that we can lower the anxiety that they and their families have,” he said.

Millholland said his deputies are using common sense about personal protection and urged the public to do the same.

“It all depends on what type of call and what the deputy feels their exposure is,” he said. “Everybody gets it. We’ve got to be together in this thing.”

It costs $89 per day to house an inmate, if they’re healthy. $77 of that comes from my local taxes. So, when they have 200 less inmates, that’s $17,800 less PER DAY we pay for. Bonus that my taxes aren’t paying retail for their medical care, or the liability settlement when they don’t get proper medical care. Also, their kids aren’t in foster care if they’re home to take care of them. Some of these folks have jobs, too. I don’t care to have the financial or moral responsibility for holding shoplifters, “drunk in public” offenders, unpaid parking ticket holders, especially when they’re .also diabetics or have asthma....

In short, there is No Way this is a bad idea during a pandemic.

Don't like jail? Don't break the law. Why not empty the prisons while your at it so inmates aren't passing HIV from one inmate to another. This sets a dangerous new precedent allowing people out of jail over a health risk. Poor life choices put them there, choices they made and need to live with.

Are you really whining because people aren't being punished to your standards? I guess it's easy to hide behind your anonymity, huh?

This is the same bunch that won't pick up illegals, but they'll evidently let convicts loose in society. I'm sorry, but that's bulls**t. Prison is a great place for social distancing if you keep the convicts in their cells. Right now I have a daughter in California who is on lockdown. She can't leave her apartment, and yet we're going to let CONVICTS loose into society? . Releasing them into the public to spread the corona virus (and you know some probably already have it. God forbid the public be told) seems to me like officials endangering public health.

Don't you know that the Left is in charge of who has to follow laws and who doesn't? If you break laws for Leftist Approved "reasons", then you get a pass... or an early release... or food stamps, driver's licence, and voting privileges!

Did you even bother to read the article or did you just write your diatribe based on the headline alone?

What a load. I guess with the toilet paper shortages, this kind of post costs dearly...

Jails are not "social distancing". Keeping people locked in cells only makes them more susceptible and less easily treated. I'm afraid authoritarians like you, Mr Anonymous, are afraid that your hard and fast punishments are failing in these times. Get over yourself.