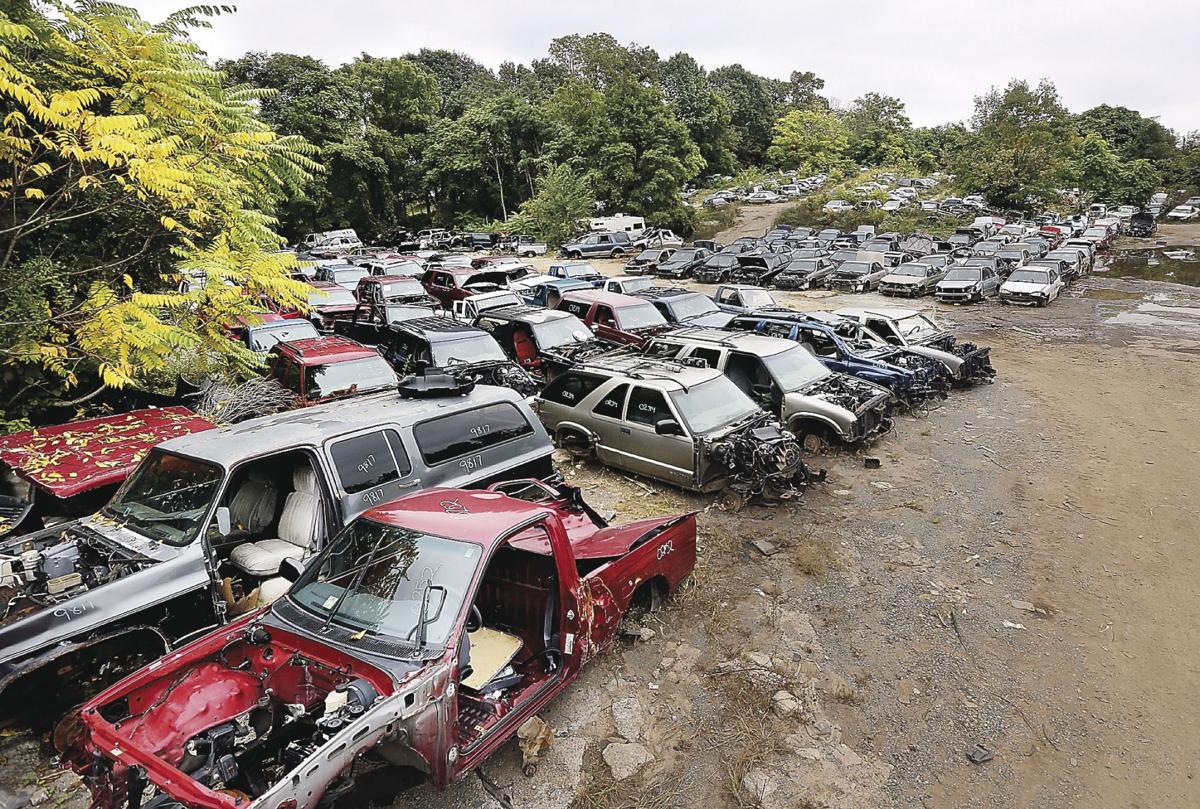 This is a view of a portion of G&G Auto Recyling on Round Hill Rd. 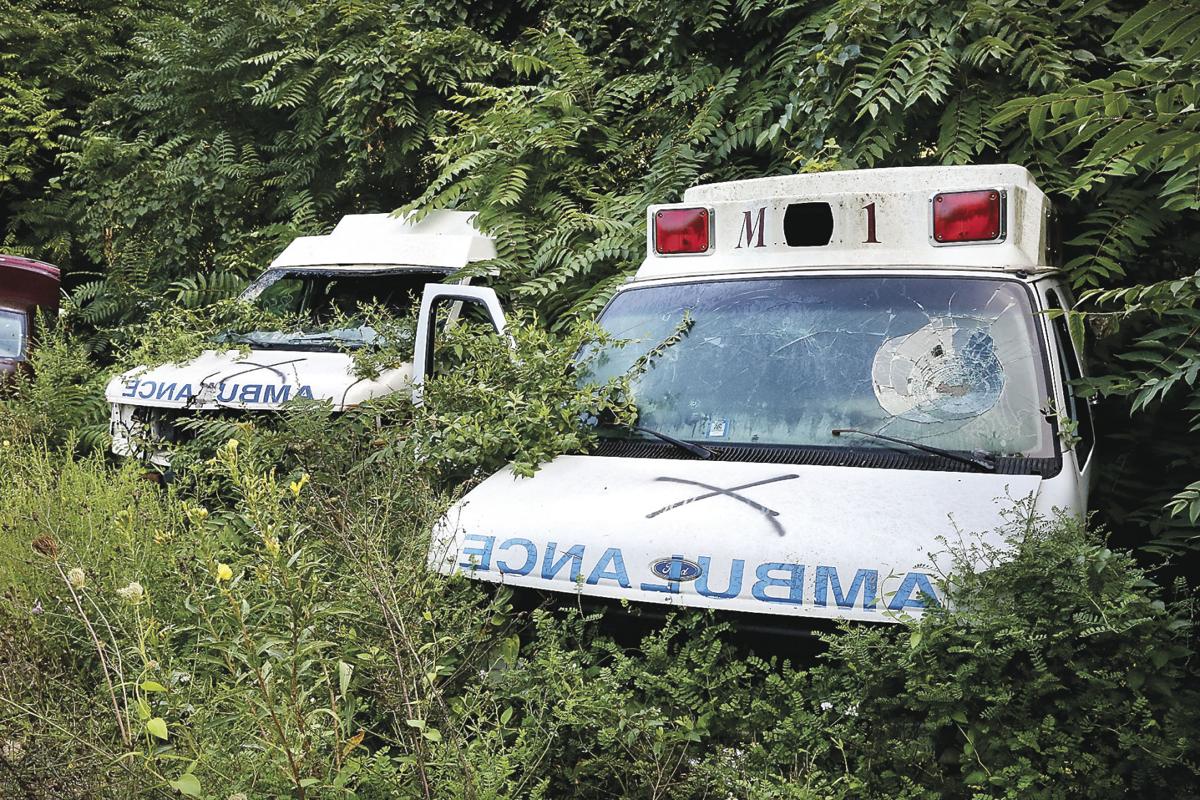 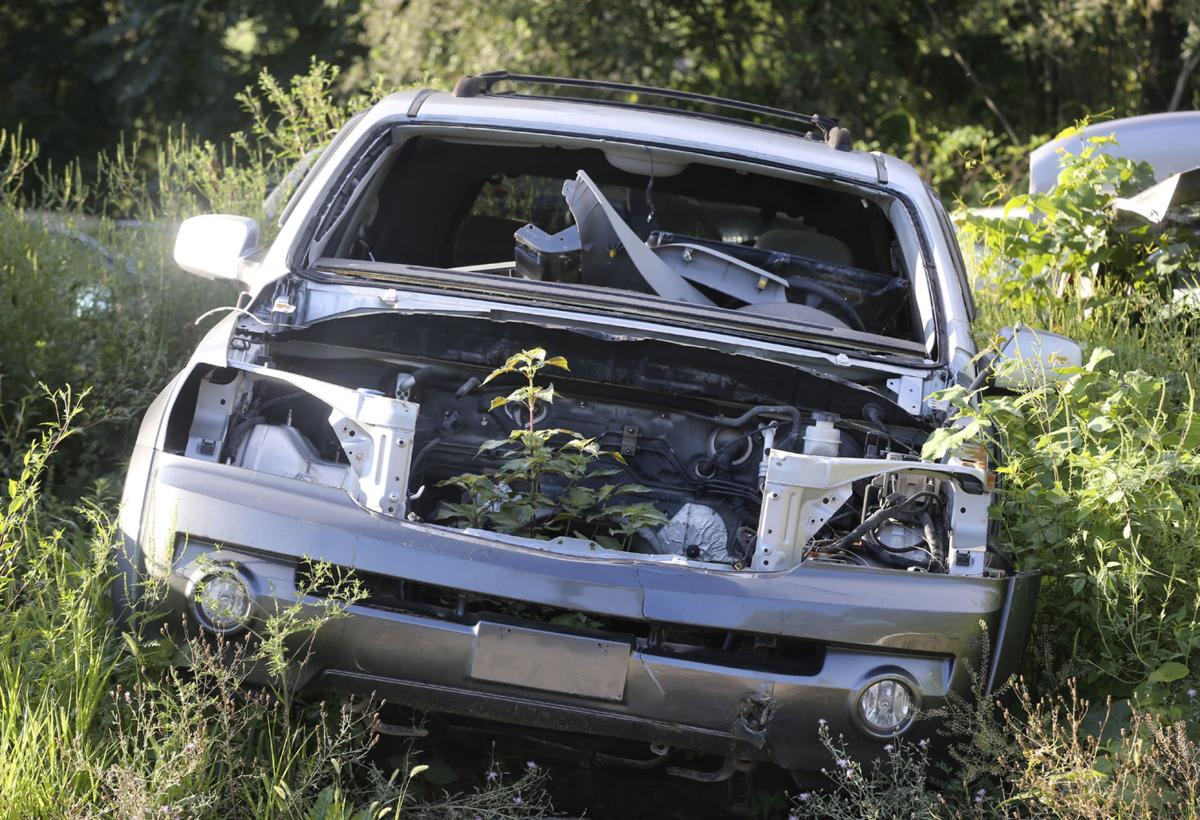 A Kia SUV rests in a field behind G and G Auto Recycling on Round Hill Rd.

This is a view of a portion of G&G Auto Recyling on Round Hill Rd.

A Kia SUV rests in a field behind G and G Auto Recycling on Round Hill Rd.

For 25 years, people have come to G & G Auto Recycling at 183 Round Hill Road seeking a replacement part to keep a beloved — or just needed — older vehicle operable.

G & G’s 6.5 acres off U.S. 50 West in Frederick County has been the final resting place for thousands of vehicles.

Rizzari has managed G & G for owners Gary and Mike Bohnenkamp since 2003, when he fell in love with Winchester and moved here from California with his wife and five children.

At G & G, a few of the metal hulks are nearly as old as the company itself but the majority of the cars, SUVs, trucks are less than 15 years old and all are subject to cannibalization.

Auto recycling is the 16th-largest industry in the U.S. with 25 million tons of materials recycled from old vehicles annually contributing $25 billion a year to the national gross domestic product, according to the Institute of Scrap Recycling Industries Inc.

On a recent Saturday morning, Jacob Nichols, 38, of Stephens City, who works for Perry Engineering, labored in a white grease-stained T-shirt struggling to remove the rear bumper assembly from a junked 1996 Nissan Altima.

His wife’s 1994 Nissan Altima had been fiercely rear-ended by a hit-and-run black Hyundai Santa Fe the night before, and he wanted to replace the wrecked bumper before she got off work that evening.

It took him three hours to get the bumper off, and he hoped when she saw the repair, “She will kiss me and give me some loving.”

Customers can wrestle a part from the junked vehicle themselves or have G & G do it for an add-on fee. Rizzari charged Nichols $125 for the bumper — saving Nichols an estimated $150 if had bought the replacement bumper over the Internet or from a parts dealer.

When owners are ready to junk their car, they either drive it or have it towed to the yard, where Rizzari will take into consideration the year, make, model, mileage, condition and workable parts while also “respecting the weight,” he said, before setting a purchase price for the car.

“The price of steel does dictate what we will buy,” Rizzari said. “Right now the price is between $5 to 6 per pound but it has been $14 per pound sometimes.”

G & G, with six employees, doesn’t purchase scrap metal pieces because it is “not our business,” Rizzari said, nor will they buy separate spare parts because they don’t know the remaining life cycle or where it came from.

“It is so expensive to run this business, the risk isn’t worth it,” he said. “We want to be known as an honest, trustworthy company. The automobile recycling business can be pretty shady.”

Marvin Marsee, 70, of Frederick County didn’t take too long recently to find a junked 1986 all-wheel-drive Ford F150 in his search for a small inertia switch, which shuts the fuel pump off in an accident.

“I have been here a lot lately trying to keep my old truck running,” he said, making several trips from the junkyard to the office before finding the right-size socket wrench to remove the switch.

“I found the truck in 10 minutes but it took me half and hour to get it off,” Marsee said, his fingers black from grease. The charge was $5, but “it would have cost me $30 to buy a new one at NAPA or AutoZone,” he said.

When G & G buys a vehicle — always getting valid identification and ownership title — it is placed in the company’s inventory database and the information is shared with other recycling yards and online with the public.

Would be fixer-upper owners can search CarParts.com with more than 1 million car parts available across North American and Mexico. G & G’s inventory can be found at http://www.gandgautorecycling.com.

The company’s computerized inventory usually includes 100 items from a car, although a typical car has hundreds of parts.

“It’s impractical to even try to inventory more parts,” Rizzari said. “We often send photos of what we have to a customer to see if it’s right for them or not.”

And if workable used parts cannot be found, Rizzari and his associates — Michael and Lori Bohnenkamp — can order new parts at a discount.

He notes there is “always some risk when you order a used part. We give you all the information we have, for example, if the engine has 200,000 miles on it.”

Any vehicles G & G buys — which may sit on the company’s lot from six months to two years — are eventually scraped and crushed at the end of their useful parts life. About 100 vehicles are crushed into scrunched metal blocks about once or twice a year.

Without a rail line, a trucking company is hired to load junked cars — 10 at a time with multiple trips — and deliver to a Pennsylvania firm for crushing into scrunched metal blocks. Rizzari said the crushing date depends upon the price of steel at the time and can involve 70 to 100 vehicles.

Peter Hughes, 70, an electronics engineer who splits his time between Winchester and Hagerstown, Md., was at G and G recently looking for a speaker and center console for a 2001 Durango SUV with 232,000 miles on it that his wife had bought for him.

The junkyard is equal opportunity — car, van, SUV or truck, foreign or domestic — no automotive demographic is missing. Steel frames, shiny wheels, engines, hubcaps, radios, distributer caps, mirrors, alternators and other parts are piled in covered areas behind the office.

Would-be buyers sign in at the counter before heading to the yard to scavenge for a solution to their mechanical woes.

Rizzari fields phone calls, questions and quotes prices while pounding the computer to augment his answers.

Kristique Stor, 27, and Alec McColl, 28, of Frederick County scoured the yard recently for a pair of mirror assemblies to fit the frame of a stripped 1968 VW Beetle.

They have visited the junkyard together often, Stor hauling the backpack full of tools while McColl climbs over and between rusting vehicles looking for parts.

“The biggest part of our business is used car parts, no question,” Rizzari said. “It used to be you could call a yard and we would always have to search the yard to find what they wanted. We will still do that but the biggest part of business now is all Internet-based, with the inventory accessible to everybody. The days when there was a guy sitting on a crate waiting for a customer to come in has gone.”

When disaster strikes, G & G can be a savior.

“I lost it going down my driveway and hit a tree,” said Charlotte Viand of Frederick County. “The whole front end was smashed.”

Some items are pulled from the core of the automobile for sale to a professional buyer when enough are accumulated.

That could include alternators, catalytic converters, aluminum radiators etc. “If it can’t be sold, it is cored,” said Rizzari. “Very little gets thrown away.”

One challenge today is the plethora of options on new cars, where in the past a Ford truck used one type of wheel and today Rizzari noted, “There may be 15 types of wheels for a vehicle,” he said. “It takes longer to qualify a customer and get it right. It’s becoming quite a science.”

And the economy plays a major part.

In a down economy, Rizzari said, people search for replacement parts to keep their vehicle running. But when the economy is running hot, people dispose of their older vehicles in order to purchase a new one.

The property/business is currently on the market for a list price of $600,000, according to real estate web sites.

“The right person hasn’t come in yet,” Rizzari said. “If you haven’t done (this business) before, you would pull your hair out after a week.”

Your post covers each and every aspect or essential topics require for it. Love to read it. There are many ways to get rid of old cars. Your content is amazing. Please share more stuff regarding scrap price for cars with us.