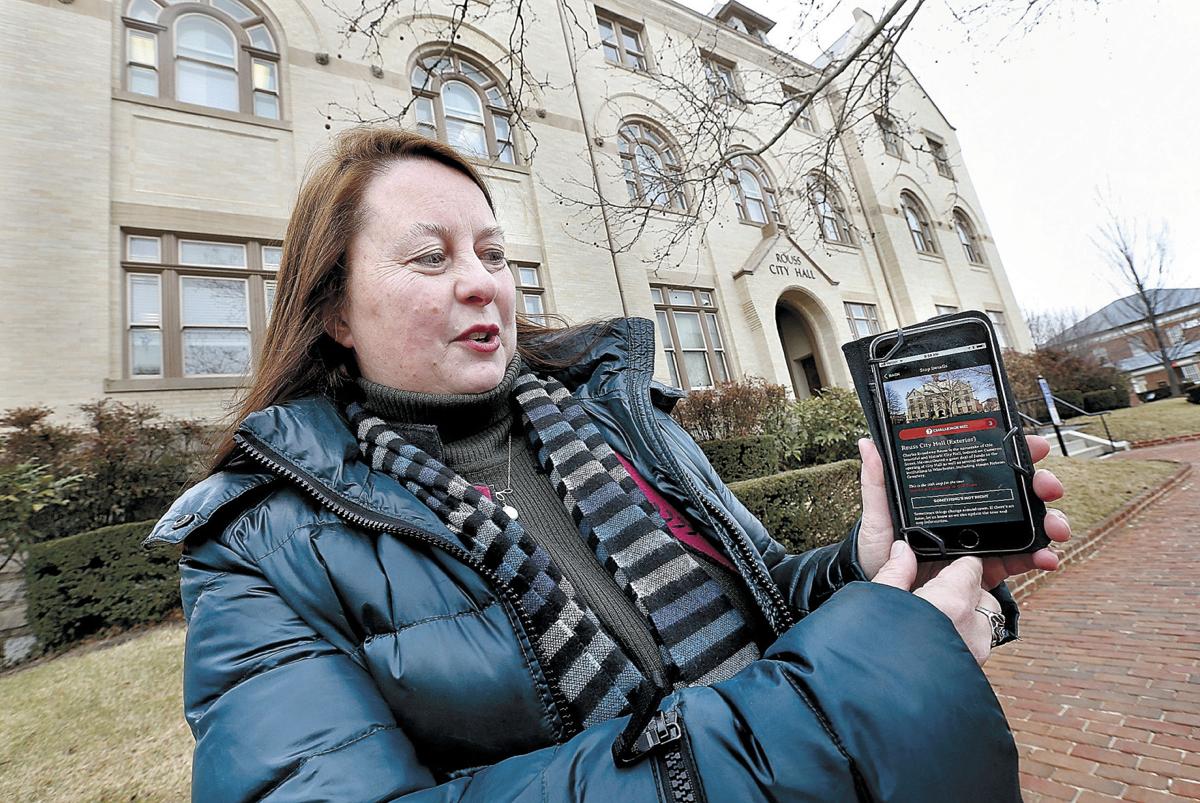 Winchester Downtown Manager Jennifer Bell demonstrates the new Traipse app at one of the points of interest on the app, Rouss City Hall. The app offers themed walking tours and scavenger hunts to local businesses and historic landmarks in downtown Winchester. 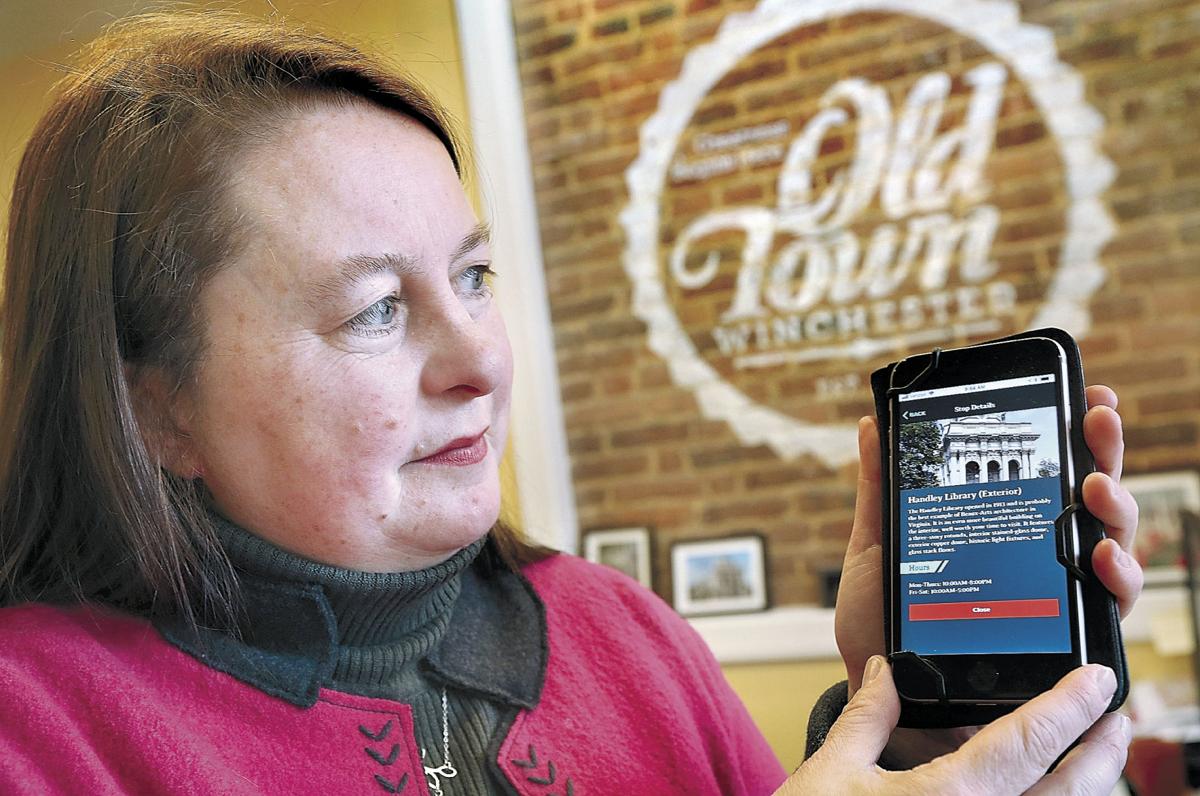 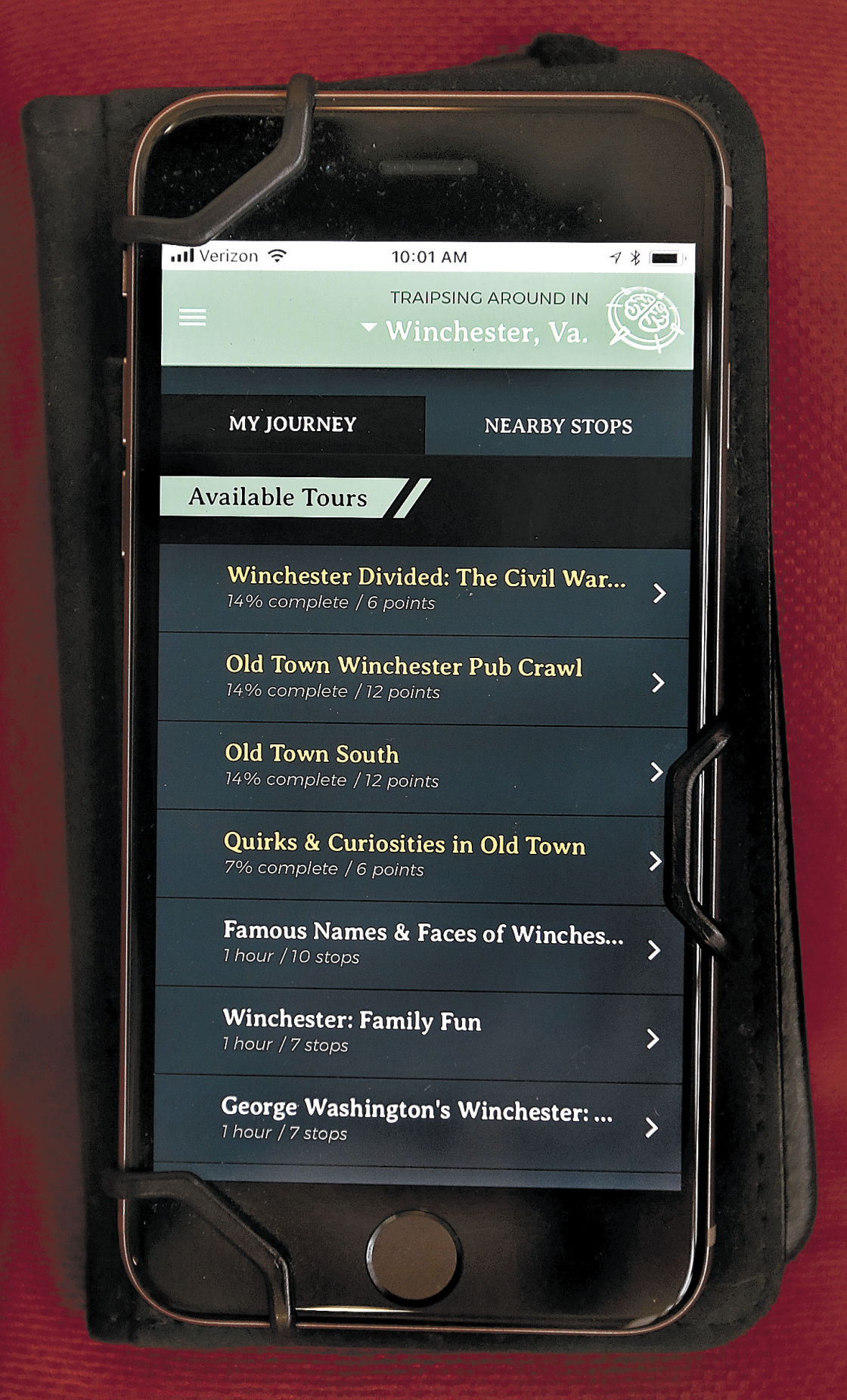 The Traipse app, which includes scavenger hunts and walking tours for Old Town Winchester, is available free for download for iPhones and Android devices.

Winchester Downtown Manager Jennifer Bell demonstrates the new Traipse app at one of the points of interest on the app, Rouss City Hall. The app offers themed walking tours and scavenger hunts to local businesses and historic landmarks in downtown Winchester.

The Traipse app, which includes scavenger hunts and walking tours for Old Town Winchester, is available free for download for iPhones and Android devices.

WINCHESTER — For a cool new way to discover downtown Winchester, look no further than your phone.

The Traipse app, available for free download to Apple and Android smartphones, offers nine unique, guided excursions of Old Town in the form of scavenger hunts.

When Downtown Manager Jennifer Bell first saw a demonstration of the app, she knew she wanted it in Winchester.

“I thought it was a really exciting way to get people into downtown, not just for the historic sites, but for the businesses,” Bell said Monday.

But the Staunton-based developer’s $10,000 startup fee was too prohibitive for Old Town Winchester’s budget.

Fate intervened in the form of the 2017 Virginia Main Street Conference, where representatives from nearly 30 communities in the commonwealth met in Winchester in mid-July for three days of educational sessions, presentations from city design and planning experts, panel discussions, social activities and walking tours.

To promote Traipse and help conference attendees learn more about their host city, the app’s developers created several downtown Winchester scavenger hunts similar to those it previously made for Staunton, Suffolk and Abingdon.

“After two years, if we want to continue the relationship, then we’ll have to negotiate a cost with Traipse,” Bell said.

Online scavenger hunts have been around for several years and, while users find them entertaining, businesses sometimes complain that hunts don’t help their sales because people come into their shops, find the answer to a clue, then leave without making any purchases.

Bell said Traipse has taken steps to entice app users to support the stores and restaurants participating in scavenger hunts. Developers work closely with each participating business and include store hours and any additional information requested.

Since all the information required for the scavenger hunts is in the app, and since no prizes are awarded, Bell said participating business owners get the benefit of additional foot traffic without having to devote any time to helping people play the game.

“It’s also set up in such a way that businesses can give a discount or promotion [to players], if they want,” she said. “I can’t make the sales for anybody, but if I can help get people in the door, then I feel I’m really doing my job to help the businesses.”

Bell said each available scavenger hunt lists the number of stops and estimated walking time, so people will know in advance how long each activity will take.

The hunts can be completed faster than advertised, but users won’t get the benefit of learning about the significance of each of the stops.

Winchester scavenger hunts available in the Traipse app include:

While the Traipse app’s local scavenger hunts are already available for free download and use from Google Play and Apple’s app store, the first big public introduction will be March 10 during the St. Paddy’s Celtic Fest in Old Town Winchester.

“We’re going to have Traipse staff here, ... and they’re going to be conducting a hunt with a prize,” Bell said.

Until then, Bell said she and Traipse developers will continue to gather feedback from users and participating businesses to make sure the app is working as effectively as possible.