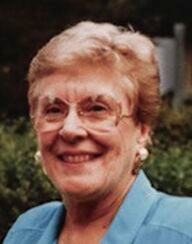 Carol was born in 1922 in New York City, the daughter of the late Homer and Mae Savell Croy. She was a graduate of Friends Academy in Locust Valley, New York, and the University of Arizona. Carol was a retired travel agent, loving her job, at several different local travel agencies.

Carol loved to travel and had the opportunity to visit 83 countries on 6 continents. Seeing the world was a priority yet she was just as happy taking the grandchildren to the beach.

She had many skills all involving the creative process. She was an excellent seamstress making doll clothes, outfits for her daughters, and many dresses for children in Africa. She was an avid reader of books and newspapers. She loved to garden and to entertain.

Her parents were both authors and well-known in the literary community and that allowed Carol to meet many famous people in her lifetime. Some that stand out are Will Rogers, Willa Cather, Theodore Dreiser, Lowell Thomas, Sinclair Lewis, Dale Carnegie, Eleanor Roosevelt and Helen Keller. On her 10th birthday she received a hand drawn birthday card from Walt Disney.

She dreamed of being a writer and she had her first story published at age 6 in a neighborhood newspaper. She also wanted to be an actress and was an extra in several Hollywood movies.

She was active in Winchester life - WinchesterLittle Theatre; the Hospital Follies; Scout leader; garden, bridge, and book clubs; and writing commentaries and modeling in local fashion shows. She also wrote and hosted a radio show on WINC called “Carol and Carolyn.”

She considered life an adventure and even if things didn’t go well, it was still an adventure. Making people laugh gave her great pleasure and created many long-lasting friendships. She was determined to bring a smile to someone’s face. Her philosophy of life was that it had to be FUN!

She was preceded in death by her parents; her husband; her daughter, Megan Croy Ebert Lyons; and two brothers who died in childhood, Creighton Croy and Homer Croy Jr.

A funeral service will be conducted on Tuesday, April 26, 2022, at 11:00 a.m. in the Chapel at Westminster Canterbury with Pastor Elizabeth Lewis officiating. Masks may be required.

Add an entry as anonymous