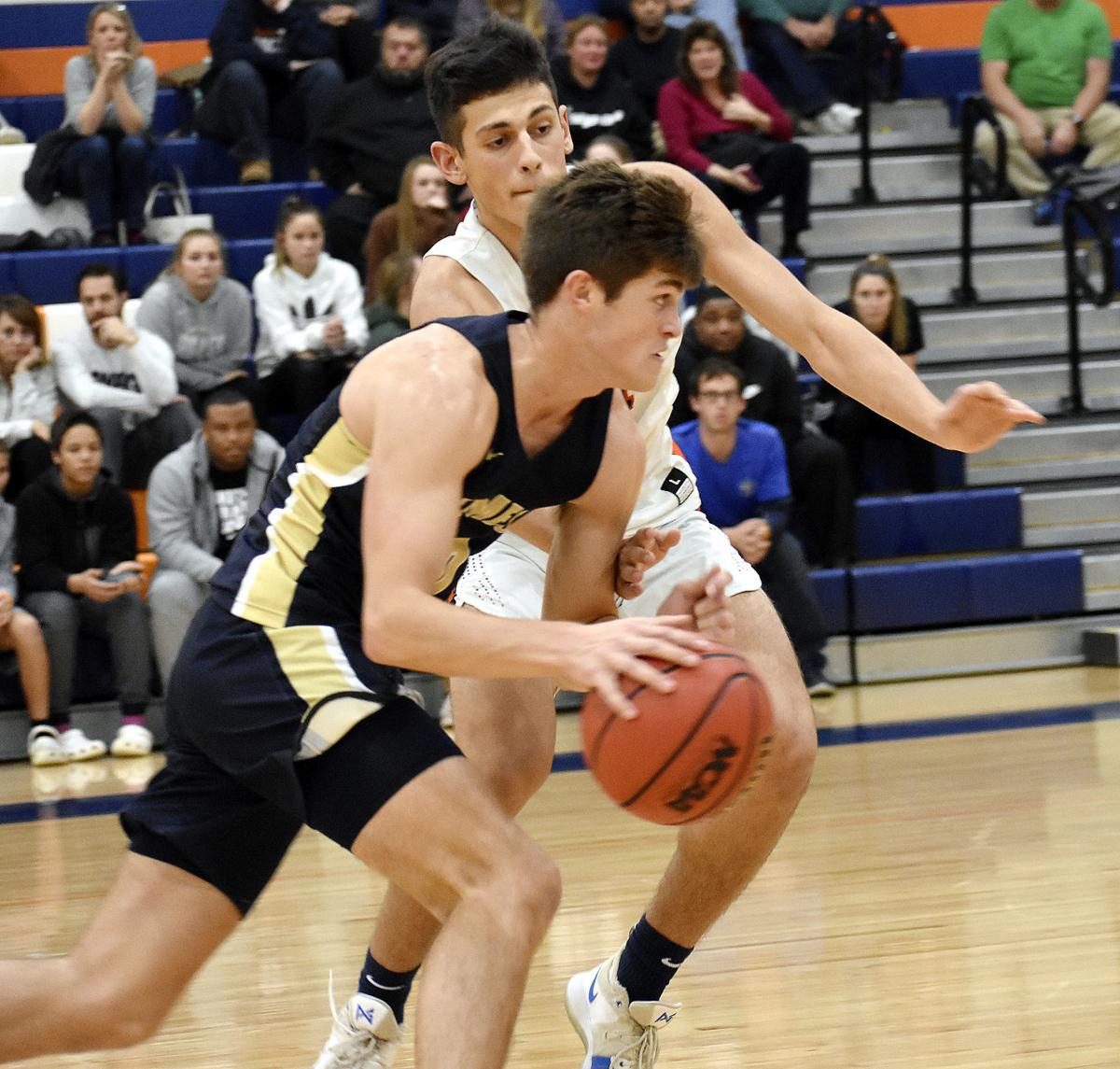 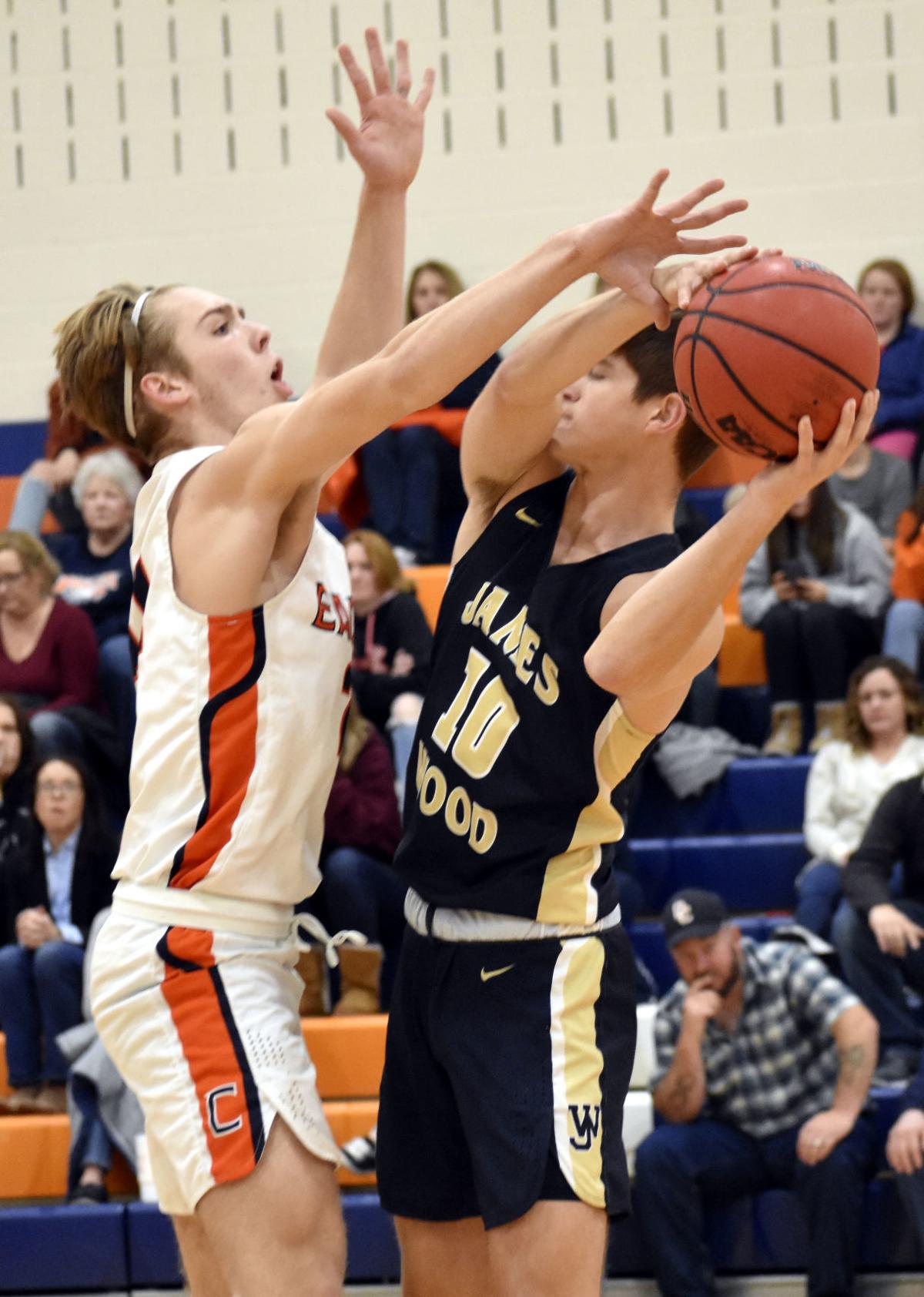 Clarke County’s Ellis Nei pressures James Wood’s James Cornwell (10) during the first half of Friday’s boys’ basketball game. Cornwell had 17 points and Nei netted 11 to lead their teams as the Colonels defeated the Eagles 57-46. 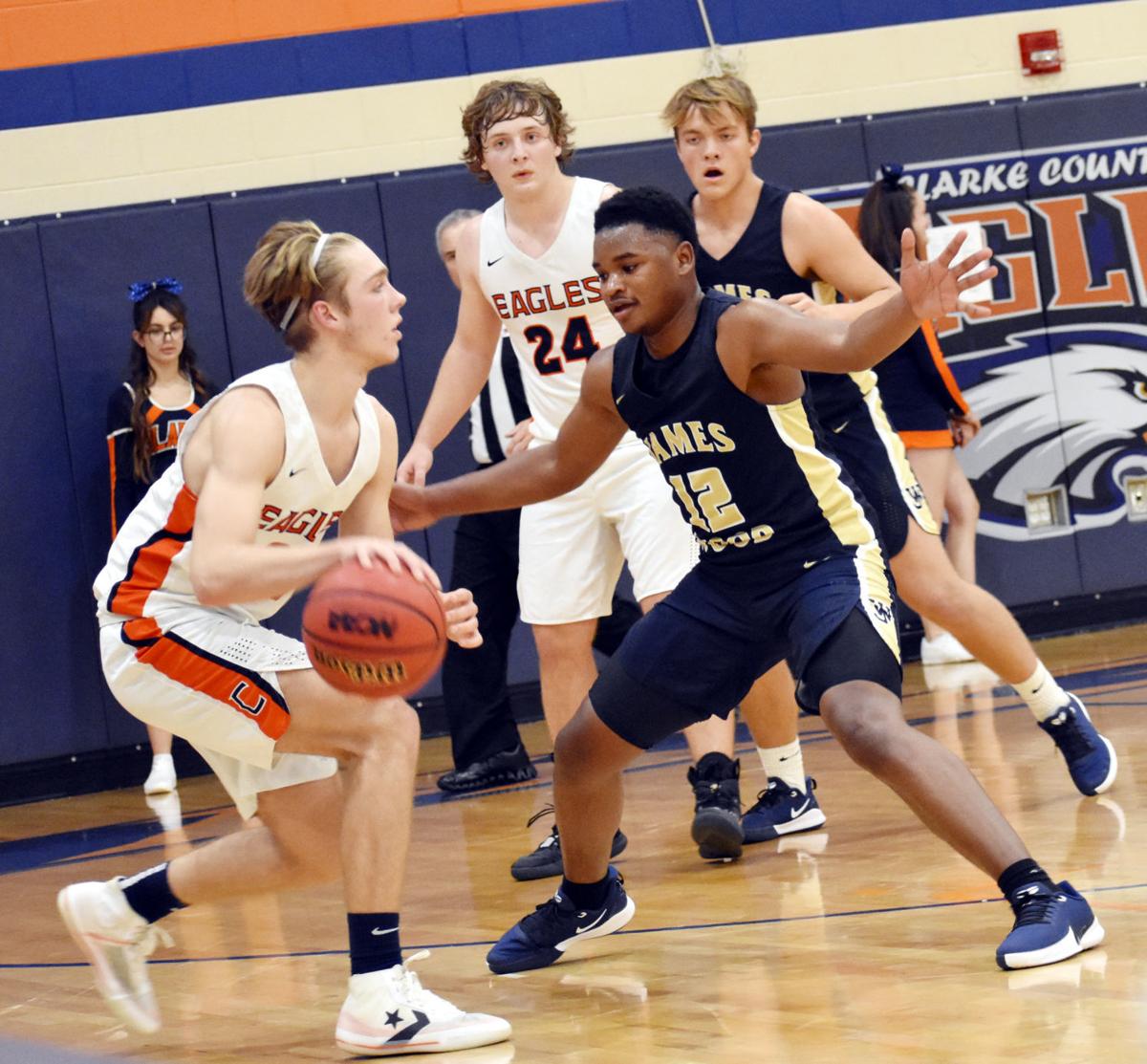 Clarke County’s Ellis Nei pressures James Wood’s James Cornwell (10) during the first half of Friday’s boys’ basketball game. Cornwell had 17 points and Nei netted 11 to lead their teams as the Colonels defeated the Eagles 57-46.

But, that was last season.

The roster looks very different for the Colonels this winter and in their opener against many of those same Eagles on Friday it showed.

Led by new faces James Cornwell and Tyrome McCarthy, James Wood pulled away in the second half to knock off Clarke County 57-46.

Cornwell had 11 of his game-high 17 points and McCarthy added seven of his 13 in the third quarter as the Colonels extended a three-point halftime lead to 11 points.

The difference in James Wood, which struggled to a 1-22 record last season, was obvious from the opening tip. The Colonels, who played Friday without last year’s top scorer Ben Smith, went toe-to-toe with the Eagles.

“Last year, we were prepared but a little bit inexperienced,” James Wood coach Tim Wygant said. “We brought a lot of experience [Friday] and we’ve got a couple of new faces who are contributing immediately and have been here the whole time. It almost feels like it’s still a continuation the achievements and the progression we made last year.”

Since last season, Wygant has seen four transfer students arrive. Cornwell, who will play Division I soccer at George Mason, and Jacob Medina played at Mountain View Christian Academy last season. Tyrome and Jerome McCarthy attended Handley, but did not play for the Judges. They’ve all been working out with the team since the spring.

The new faces coupled with the returnees have made the Colonels a much different team.

“They have a lot of size,” Clarke County coach Brent Emmart said. “They shoot the ball well. They played a good game. You’ve got to give them credit. They played hard and they executed. They made a lot of plays.”

The Eagles (0-2) led 22-21 late in the second quarter before Cornell converted an offensive rebound and added a pair of foul shots inside the final 37 seconds to give the Colonels a 25-22 halftime lead.

Those points were an indication of what was to come in the third quarter for the 6-foot-3 senior. Cornwell drilled a 3-pointer on James Wood’s first possession, triggering a 12-0 run to start the second half. Tyrome McCarthy’s 3-pointer capped the outburst that gave the Eagles a 37-22 lead with 5:30 left in the period.

Cornwell would add two more 3-pointers in the quarter as James Wood took a 43-32 lead into the final period.

“I was nervous in the first half, getting all of the butterflies out,” admitted Cornwell. “My teammates lifted my head up at halftime and they just me through it. They gave me confidence in the second half to step up and hit a few shots.”

Drilling the 3-pointer to start the half was huge for Cornwell.

“It was great that he hit a couple of threes in the third quarter,” Wygant said of Cornwell. “We know that he can score the basketball.”

Clarke County could never put a big dent into the James Wood lead in the final period. The Eagles never got closer than nine points.

The Colonels had eight different players score in the contest. Steven Brown delivered eight points off the bench.

“It’s great to have the depth we have,” Wygant said. “Everybody came in and contributed.”

And that product showed a vastly different result in the opener than a year ago.

“We’re definitely a different team,” said Cornwell, who had four assists. “That’s a good sign to see that we had a big turnaround from last year to this year. It’s a big momentum switch. I think we’re definitely moving in a positive direction with our program.”

Wygant says the team still has a ways to go, but was ecstatic with the result Friday.

“We need to fix some mistakes,” he said. “We need to understand game situations a little bit more, but I think we’re going to be OK.”

Clarke CountyThe Eagles are off to an 0-2 start, but have played tough in both games. They dropped 75-72 overtime decision against Broadway in their opener.

On Friday, the game got away from them in the third quarter and they never could make a significant run to pressure the Colonels.

“The glass and inside the paint really kind hurt us a little bit,” Emmart said of the second half. “Some live-ball turnovers hurt us a little bit. We could never really get it under 10. It stayed 8 to 10 and we never could get within striking distance.”

“We didn’t shoot the ball well. We didn’t execute well,” Emmart said. “I’ve just got to do a better job of getting them ready to play the next game. We’ve got to move on.”

“If anybody plays Clarke County, he’s got to be their primary focus,” Wygant said. “He got some at the end which I’m not terribly happy about, but he’s a great basketball player with great inside moves. We talked about it beforehand that we needed to limit his opportunities and our kids took that to heart and took that game plan as their goal.”

Emmart said the Eagles’ goal is to rebound. “We’ve had two hard games to start the season,” he said. “We’re 0-2 and we’ve got to come out Tuesday and get a win against Berkeley Springs and move onto the next game. We can’t dwell on this one too much. We’ve got to learn from it and hopefully it will make us stronger as the season goes on by playing tough teams early in the year like this.”

Handley hosts eight-game tourneyFor the third consecutive year, the Handley Showcase basketball tournament is set, but this year’s event has a little more local flair and eight games over Friday night and Saturday.

“This as big as a I wanted to get it with two days,” Judges coach Jason Toton said. “We started off the first year with only four teams, last year we went to eight teams and this year and this year we went to [14] teams. I wanted to create an event where a lot of the local people are going to come in and see different teams at different levels from across the state.”

The event kicks off Friday with the Handley girls facing Martinsburg at 6 p.m. Toton’s squad then tackles Tallwood at 8 p.m.

On Saturday it gets busy: Tallwood takes on Osbourn Park at noon; Loudoun Valley faces Theodore Roosevelt (Washington D.C.) at 1:45 p.m.; the Millbrook girls (3:30 p.m.) and boys (5 p.m.) battle their counterparts from Heritage (Newport News); Osbourn faces Martinsburg at 6:30 p.m. and the event closes with Handley’s boys vs. Huguenot at 8 p.m.

“I’m hoping with adding Martinsburg and Millbrook that it’s going to bring more people in,” Toton said. “My problem has been in the past that we’ve had a lot of great competition, but the teams from Richmond and Virginia Beach aren’t bringing a crowd with them.”

Millbrook coach Steven Grubbs is pleased to get the invite.

“It’s fantastic,” Grubbs said. “I feel fortunate the we’re going to be included in, both us and our girls’ team. For us being able to see some people from just outside our region is great.

“For the community itself, It’s just bringing people in here to see good basketball. I think it’s great that Handley is able to put this on and hopefully it’s something that we can continue whether it’s through Handley, through us or anyone else n the area. It’s a just great setup for basketball in the community.”