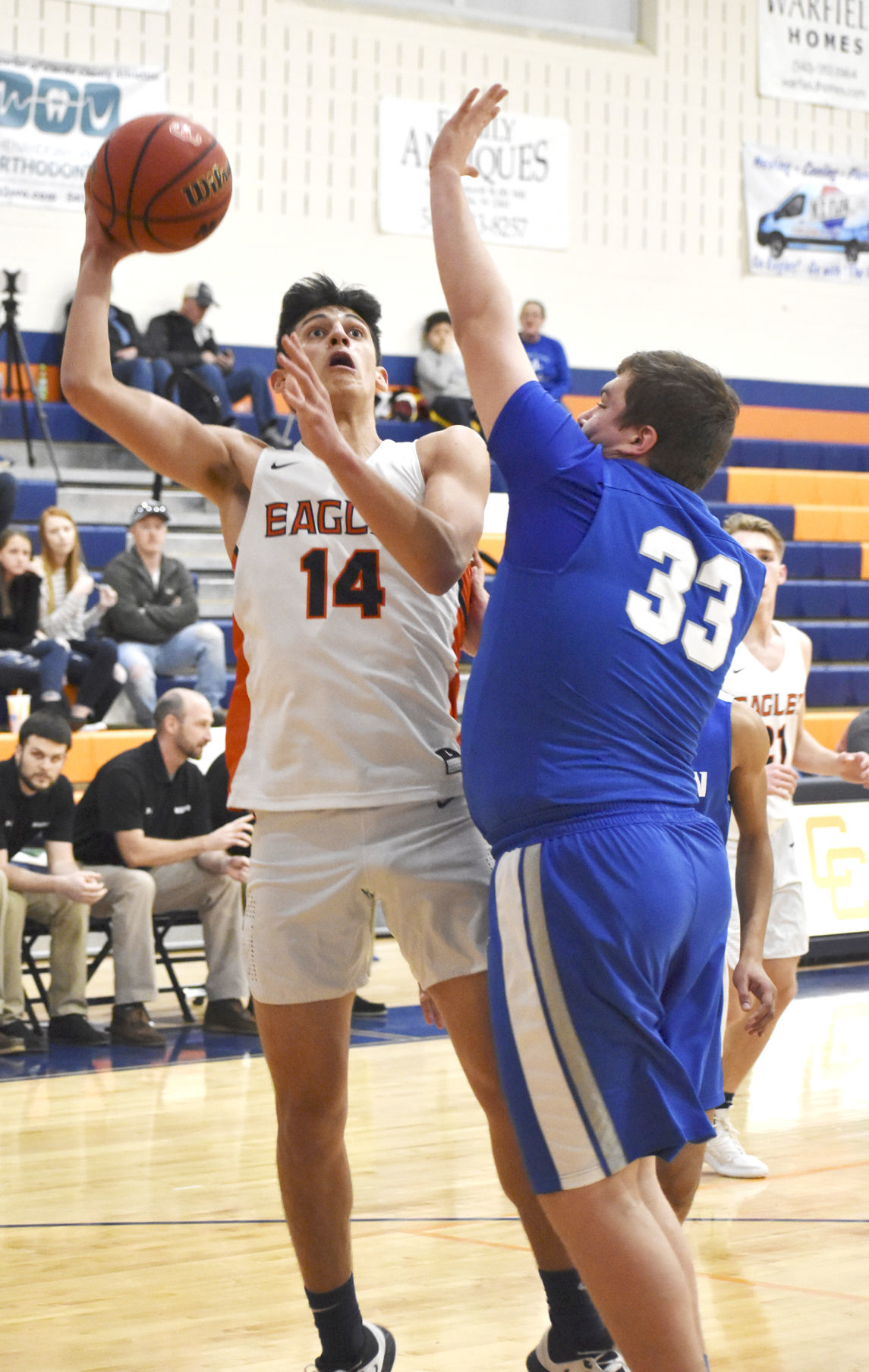 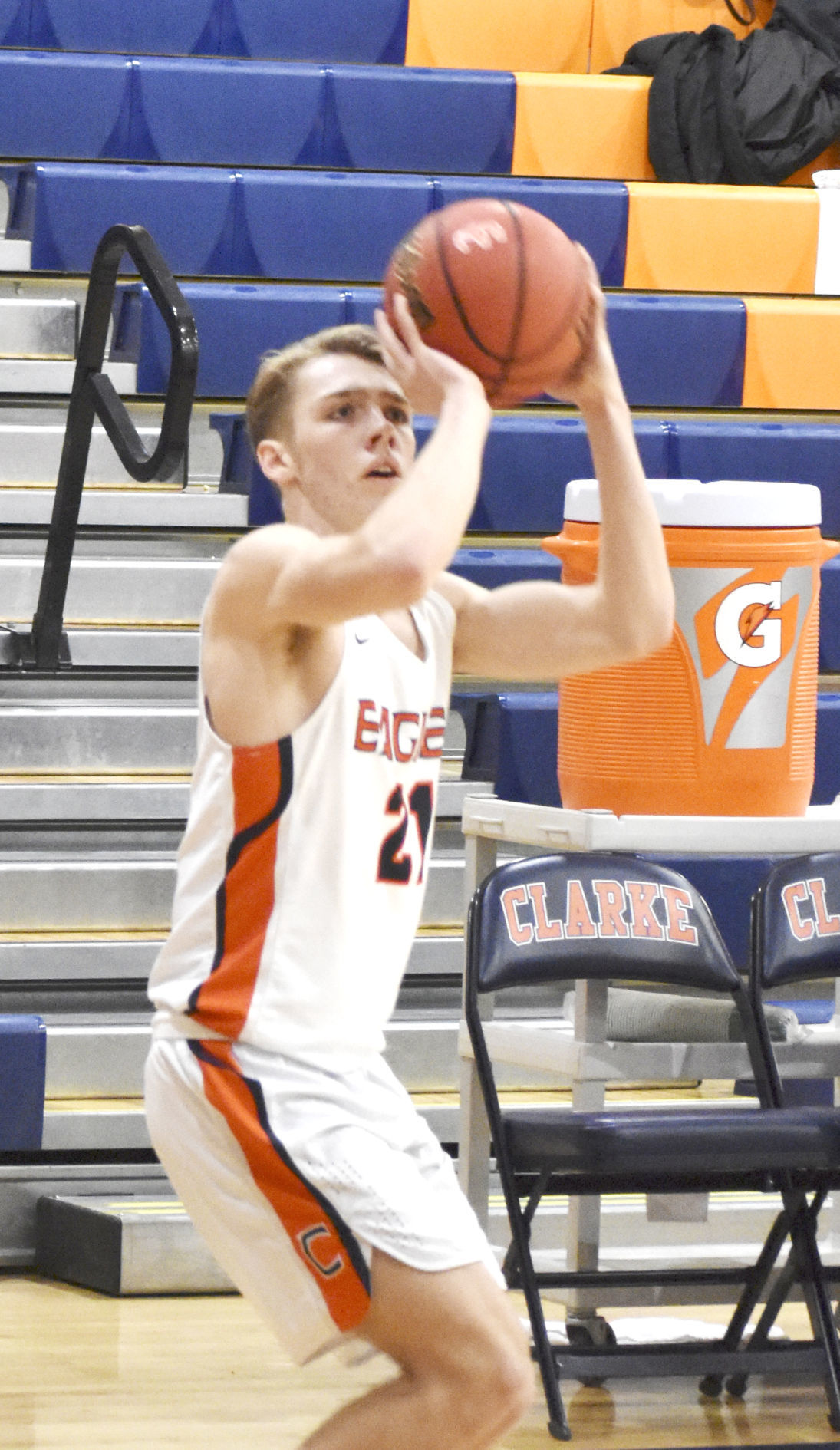 Ellis Nei starts his ascent on a 3-pointer from the right corner in the first quarter of Clarke County’s Bull Run District quarterfinal game against Madison County on Friday in Berryville. Nei scored three of his nine-first quarter points on this shot. Nei finished with 21 points in the Eagles’ 72-65 victory. 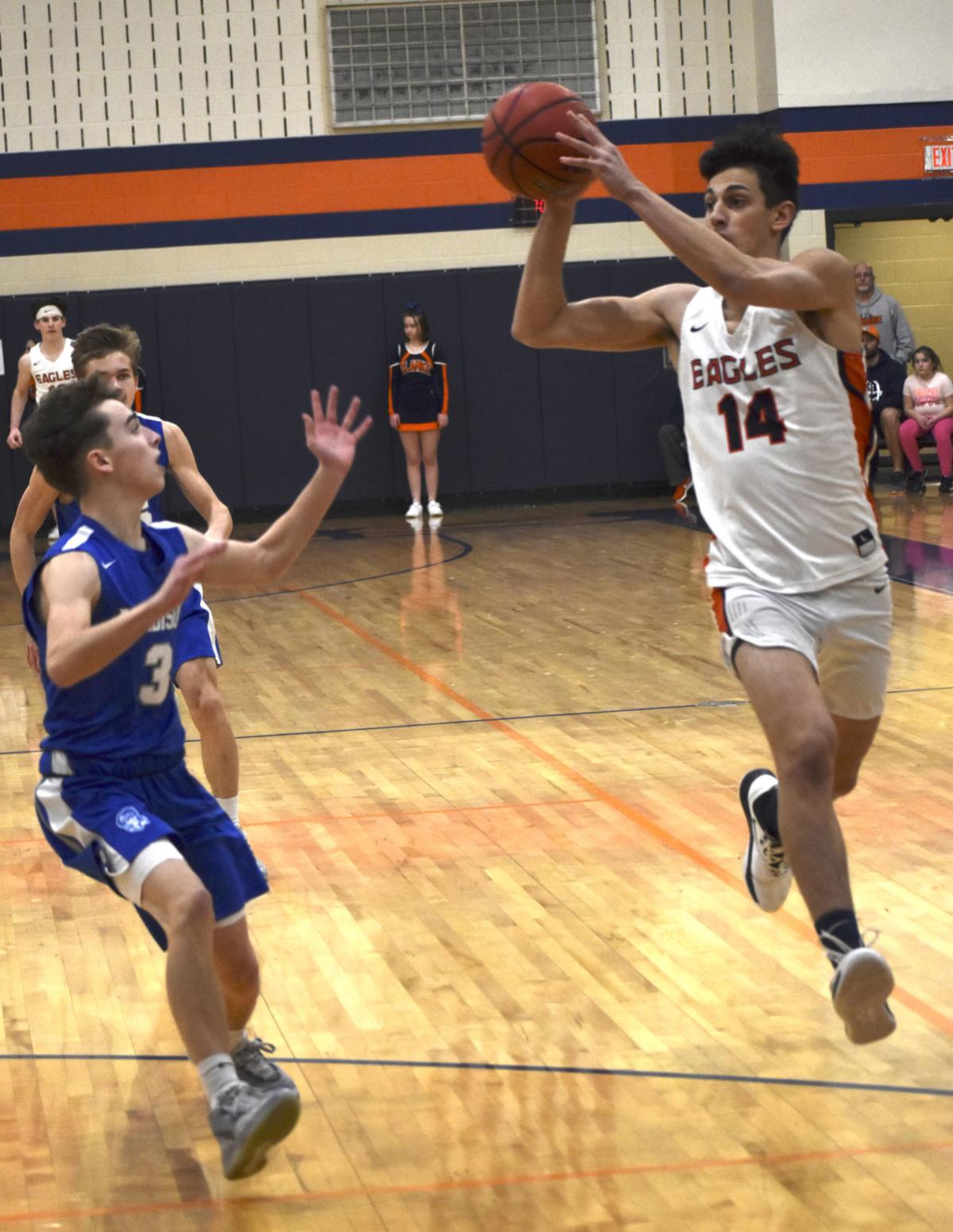 Ellis Nei starts his ascent on a 3-pointer from the right corner in the first quarter of Clarke County’s Bull Run District quarterfinal game against Madison County on Friday in Berryville. Nei scored three of his nine-first quarter points on this shot. Nei finished with 21 points in the Eagles’ 72-65 victory.

The Eagles already know they’re heading to the Region 2B playoffs as the No. 8 seed and that wouldn’t change if they lost or won the whole tournament.

Still, that didn’t mean Clarke County didn’t want to win the rubber match against Madison County after the two squads split during the regular season.

Ellis Nei and Volkan Ergen made sure the Eagles got the win. The twosome combined for 45 points as Clarke County advanced to the semifinals with a 72-65 victory.

The Eagles (10-13) will next face top-seeded East Rockingham on Tuesday, which will not be the only time those two teams see each other in the postseason. East Rockingham is locked into the No. 1 seed in the Region 2B quarterfinals and also will host Clarke County on Feb. 25.

“We told the kids we wanted to build our momentum heading into the postseason,” Eagles coach Brent Emmart said. “You try to build on one game at a time. … The kids played well tonight and it was good because at tournament time the effort gets amped up. The game is faster and the competition is a little bit more difficult. You need to have your ‘A’ game in the postseason no matter who you are playing.”

Clarke County entered the contest coming off a 64-58 triumph against second-place Page County in their regular-season finale in a contest in which Nei netted 23 points.

“The Page [gane] gave us a lot of confidence,” said Ergen, who led the Eagles with 24 points, eight rebounds and five blocks on Friday. “We really played with a lot of energy and we had a tough loss before that game. … Page really boosted our confidence a lot. We came out tonight and kept that energy going.”

“It was crucial for us tonight,” Nei said of playing a solid game. “Going into East Rock, that’s the team to beat. They are like the No. 1 team in the state right now. Page was a big win for us. Madison wasn’t as big a challenge, but that was crucial because we had to carry that momentum over. The energy was what brought it together.”

Nei helped the Eagles get off to a quick start Friday, scoring four points in a 6-0 run to start. He capped the quick run with a slam dunk off a fastbreak to the delight of the Clarke County faithful,

The slam was the junior’s first dunk in a varsity game.

“I’ve always been chasing it,” Nei said. “The first time I dunked was sophomore year on the first day of tryouts. This year I can get it so easy in practice and I’ve had so many chances, but I’ve always slipped or something has always happened. I think I’ve been overthinking it.

“I said it before the game that today is going to be the day. … I was just so relieved. Last home game of the season, that’s the way to do it.”

Though the Eagles blocked a half-dozen shots in the period, Madison County managed to hang around thanks to numerous second-chance opportunities. Dean Breeden’s buzzer beater trimmed the Eagles’ lead to 16-15 at the end of the first.

The Eagles defense came alive in the second quarter, holding Madison County (6-17) to one field goal. Nei had 13 points and Ergen had 10 as Clarke County led 29-21 at the break.

Ergen showed his range by drilling a pair of 3-pointers in the third quarter. Nei (18) and Ergen (16) had 34 points as the Eagles led 44-35 entering the final period.

“Early in the year those guys had a lot of success,” Emmart said. “We’ve had our ups and downs, but we kind of expected those two guys to be our 1-2 punch this year. They’re playing their best ball at the end of the season, so we’ve got to keep building on everything.”

The Mountaineers wouldn’t go away and led by Breeden sliced the Clarke lead to 46-41 with 6:40 left. The key sequence followed. Nei hit Luke Lyman for a layup inside and Lyman was fouled. Lyman missed the free throw, but the ball came back to Nei, who banked in a 3-pointer and the lead was suddenly back to 51-41.

From there, it was a parade to the foul line. The Eagles shot 21 free throws in the period, making 15. Deonte Trammel was 5 for 6 from the line and scored 9 of his 15 points in the period for Clarke County.Trammel had six assists and Nei added five.

Breeden had 16 of his 24 points in the final period for Madison County.

In the Bull Run District girls’ quarterfinals Friday night, No. 6 Clarke County lost to No. 3 Page County on the road 66-49. The Eagles (9-14) will now wait to see if they get a Region 2B tournament berth.