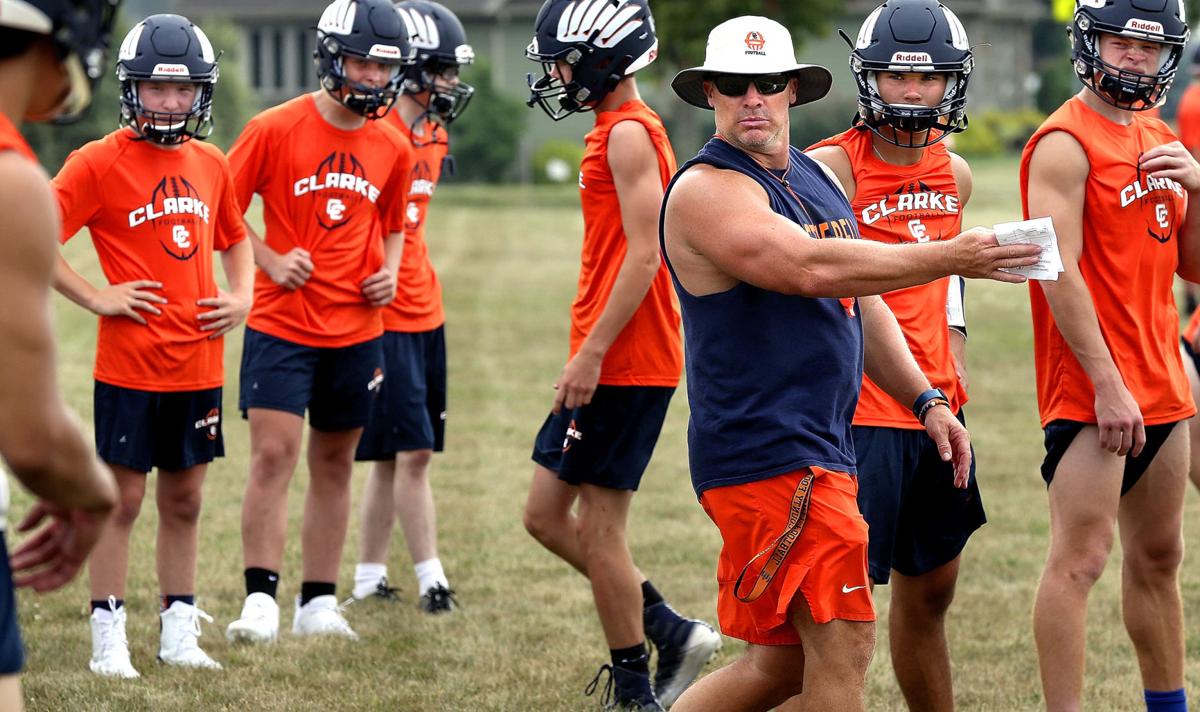 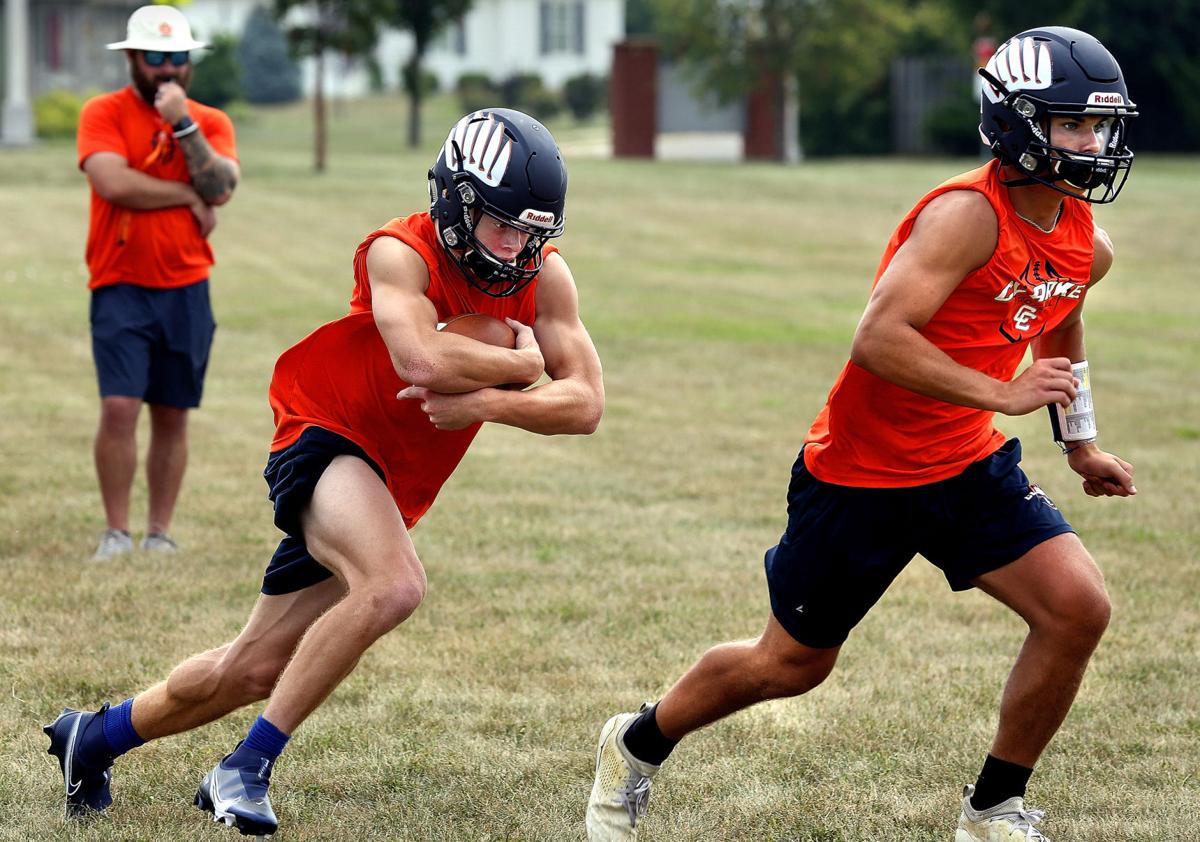 Clarke County running back Dain Booker runs behind the blocking of quarterback Matthew Sipe during the Eagles' first official practice of the season at the school Thursday.

Clarke County running back Dain Booker runs behind the blocking of quarterback Matthew Sipe during the Eagles' first official practice of the season at the school Thursday.

BERRYVILLE — It was an overcast day with temperatures in the mid-80’s outside of Clarke County High School on Thursday morning.

Everything felt quite normal for a summer day in late July.

After an abbreviated season that started in frigid February weather because of the COVID-19 pandemic and that was cut short by two games because of a quarantine at Clarke County, this warm day seemed like a blessing.

“It’s a great feeling being back to normal, kind of,” Clarke County lineman Roger Tapscott said following a string of gassers that concluded the Eagles’ first practice. “It was kind of a rough spring with not being normal, cold, shorter practices and all of the COVID stuff. It feels good to be back out here.”

Quarterback Matthew Sipe echoed the thoughts of his teammate. “It was weird last year and it’s great to be back and somewhat normal this year. If feels a lot better than it was last year.”

Eagles coach Casey Childs said his players couldn’t have been more excited than he was to get things rolling at normal pace. Childs led the Eagles to a 3-1 mark in the abbreviated season, his first since replacing Chris Parker at the helm of the Clarke County program.

“I didn’t sleep very much last night and it didn’t have to do with nerves,” Childs said. “I was excited and I know the kids are, too. It was great to get out here in this weather. And for the first time in a long, long time, it felt like a traditional and true football practice day. It was fun.”

Childs says he has approximately 62 players (varsity and JV) that have come out this season and knows a few more will be coming who are currently on vacation.

Both coaches and players feel a lot more ready than last season, where many of the team’s starters were finishing up participating in their winter sports seasons.

“I feel a lot more prepared than I was last year,” said Sipe, who also plays basketball and baseball for the Eagles. “Last year, I was coming into it like, ‘This is going to be a lot different than other years.’ This year I knew coming into it. We have circuits and a bunch of conditioning. I was ready for it.”

“I came off wrestling last year so I was missing a lot of the first practices for football,” Tapscott agreed. “I’m much more prepared this year for it.”

Childs says the difference is noticeable in on Day 1 of practice.

“It just felt like it wasn’t as rushed,” he said. “When you had those other guys playing other sports, you felt like you had to get so much stuff in during the day. Today, we took our time and tried to get a lot of reps in for a lot of kids. We’re not installing at the sheer pace that we were installing last year. You felt like you could coach more because you didn’t have to worry as much about getting your stuff in.”

Certainly, the Eagles are motivated to turn the preparation into success. Even though it went 3-1, Clarke County had its string of 13 consecutive playoff seasons snapped.

The Eagles did not play two key games during the quarantine and fell against Luray the week they returned to play. In their four games, they just could not amass enough points to make the Region 2B playoffs.

“The excitement level is very high,” Childs said. “We have great kids. We always do. We return a good portion of last year’s team, so we’re excited where we’re at.”

Childs is happy to see so many familiar faces on the practice field, especially at the skill positions in the Eagles’ single-wing attack.

Clarke County does have holes at both tight end spots, on the offensive line and at linebacker.

“We’ve got a couple of spots that are really, really up for grabs,” said Childs, whose program had an unbeaten freshman squad last season. “I’m interested to see if some of the young guys can jump up and take advantage of those opportunities. … They’re ready to put the shells on and hit a little bit.”

Childs said the Eagles can put shells on Monday and can go to full pads by Wednesday. He expects the pads to get a lot of use.

“We’re probably going to be more physical than we’ve been in the past couple of preseasons,” he said. “I think we need that. We’re going to do a little more of the physicality part of it. I think our kids will adjust to it and be good with it.”

Childs says that the Eagles have adjusted to similar COVID protocols that they had to have in the spring. Players must bring their own water bottles and practice social distancing when they are not lined up or in the huddle.

Clarke County has one scrimmage scheduled at Jefferson (W.Va,) on Aug. 13 before opening its regular season at Warren County on Aug. 27.

Day 1 of practice was good start.

“They did a good job, all of them did,” Childs said. “I know they’re going to be tired and sore, but we’re proud of them.”