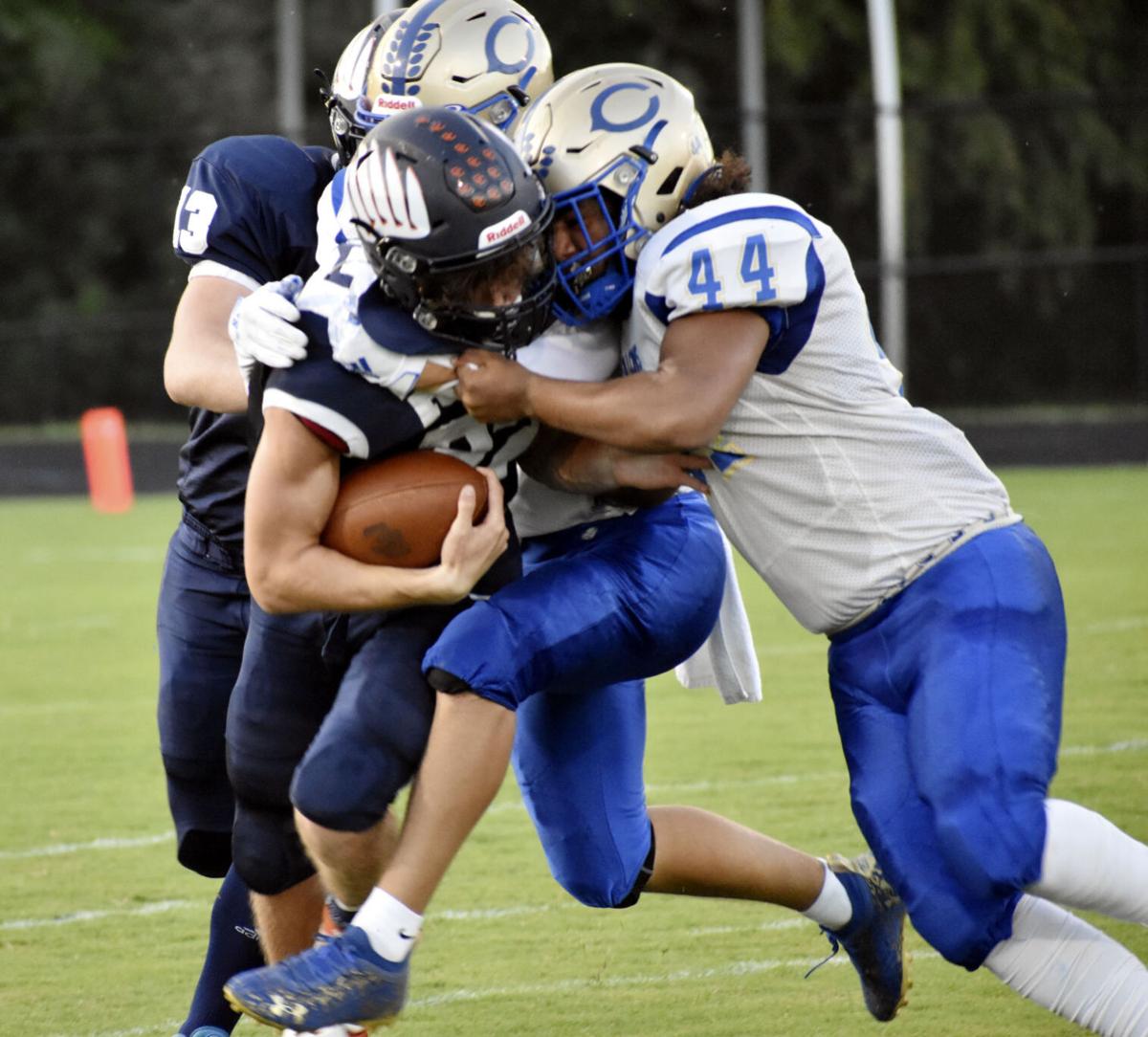 Clarke County running back Kyler Darlington carries Central’s Isaiah Dyer (44) and Luciano Retrosi for yardage in the first quarter on Friday. Darlington rushed for 180 yards and two touchdowns in the Eagles’ 13-7 victory. 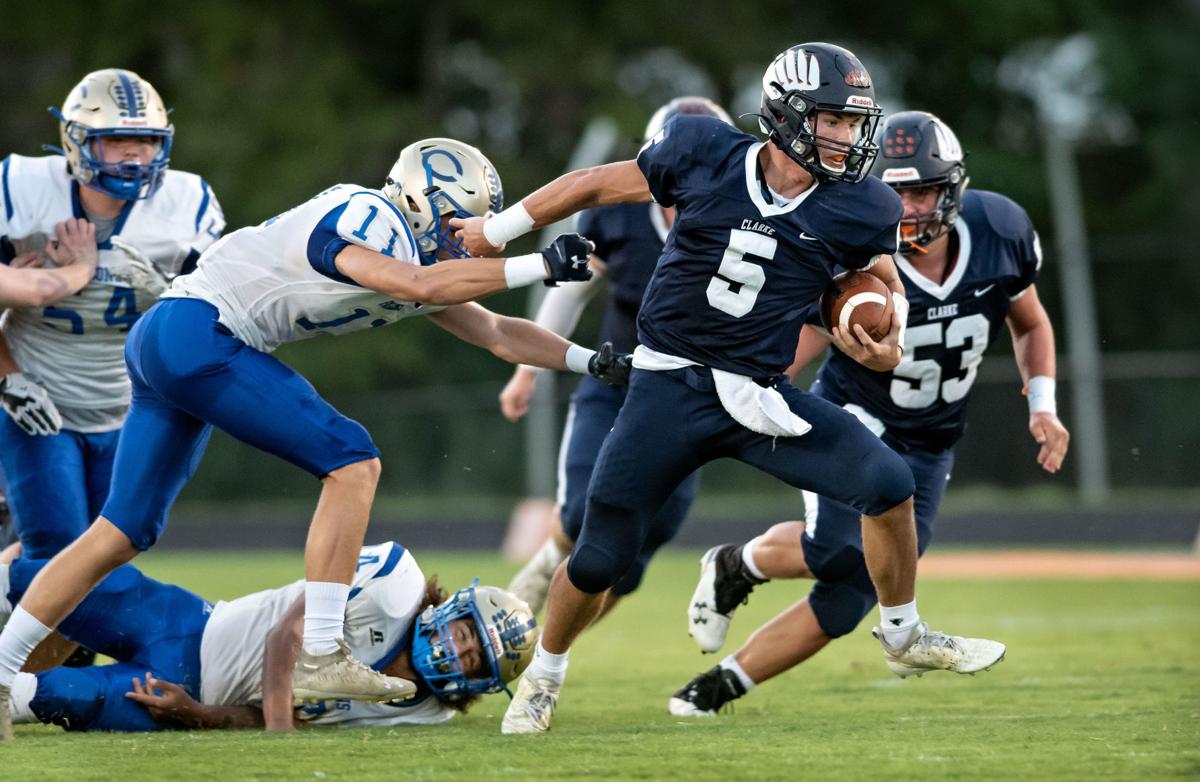 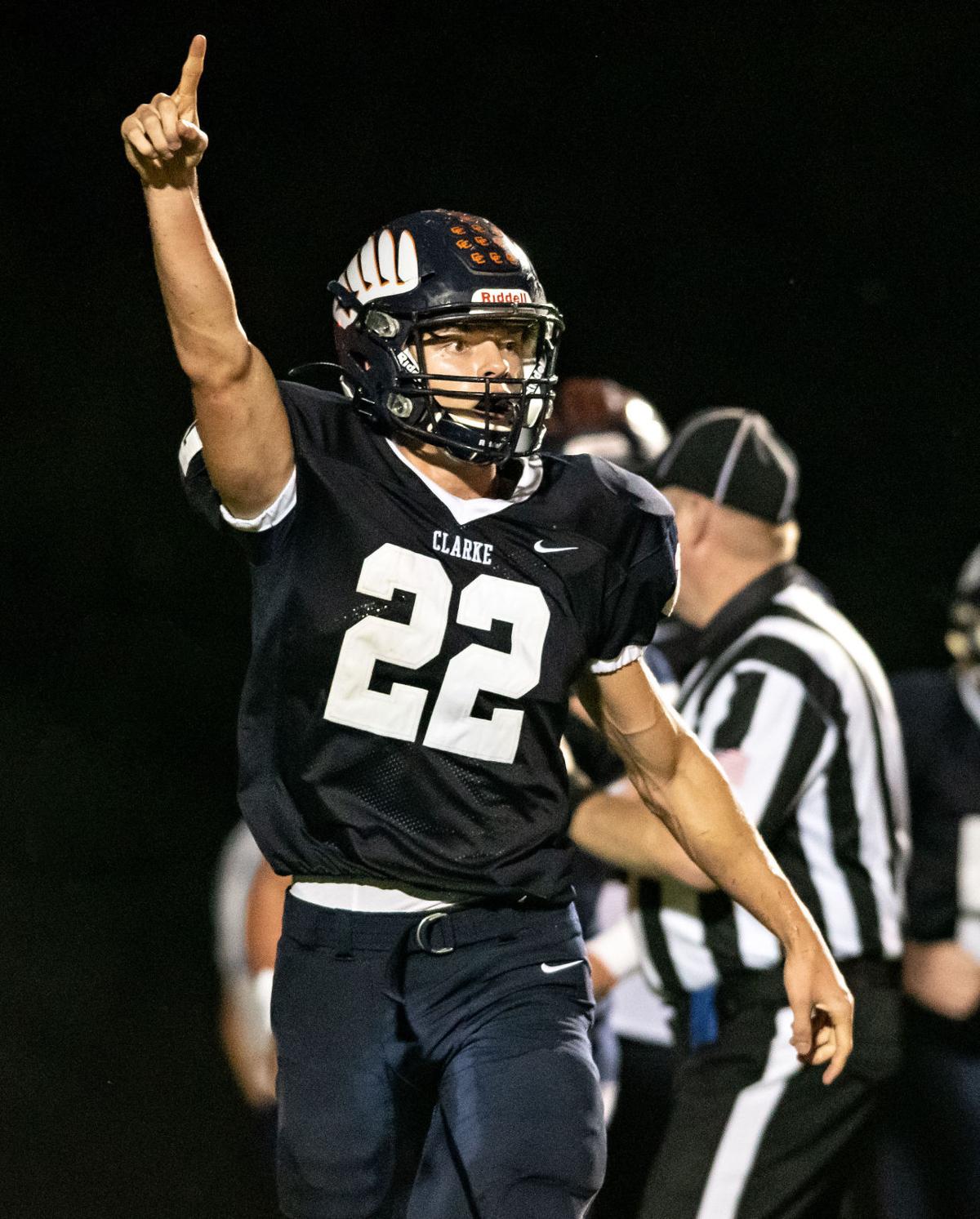 Clarke County’s Kyler Darlington celebrates after scoring a third quarter touchdown against Central on Friday. That score proved to be the game-winner in the Eagles' 13-7 triumph. 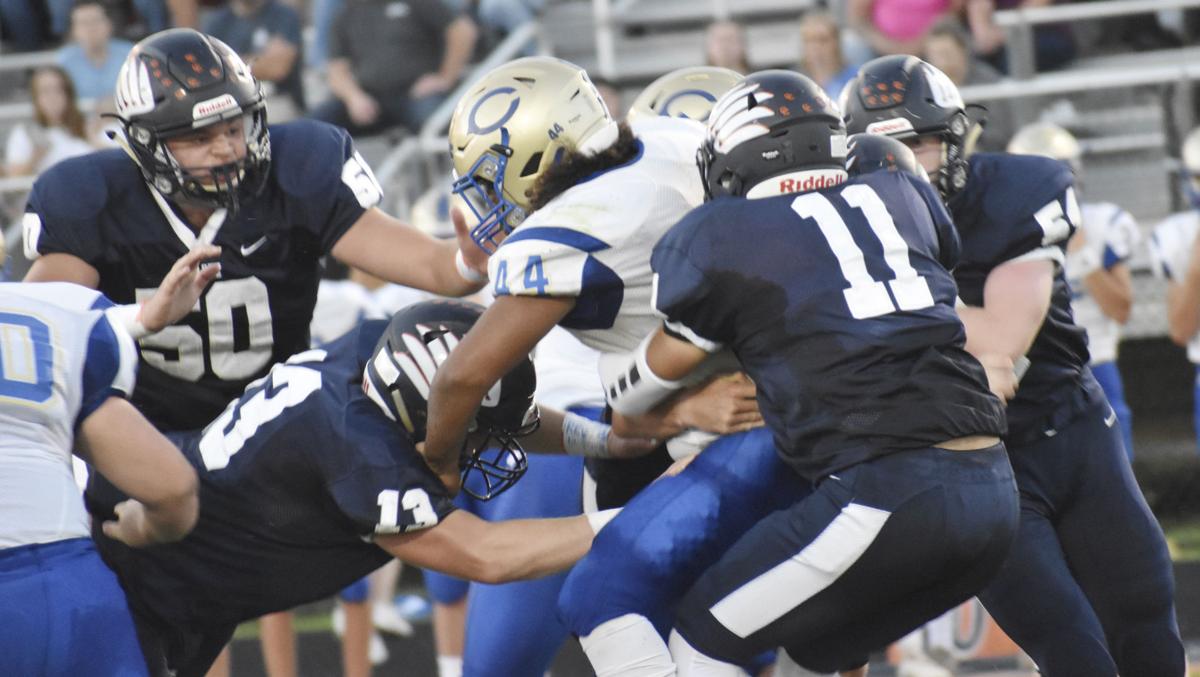 Clarke County's defense, led by Carson Chinn (11), Liam Whalen (13) and Roger Tapscott (50), wrap up Central running back Isaiah Dyer (44) for a short gain in the first half of the Eagles' 13-7 win last week. The Eagles travel to unbeaten Strasburg tonight.

Clarke County running back Kyler Darlington carries Central’s Isaiah Dyer (44) and Luciano Retrosi for yardage in the first quarter on Friday. Darlington rushed for 180 yards and two touchdowns in the Eagles’ 13-7 victory.

Clarke County’s Kyler Darlington celebrates after scoring a third quarter touchdown against Central on Friday. That score proved to be the game-winner in the Eagles' 13-7 triumph.

Clarke County's defense, led by Carson Chinn (11), Liam Whalen (13) and Roger Tapscott (50), wrap up Central running back Isaiah Dyer (44) for a short gain in the first half of the Eagles' 13-7 win last week. The Eagles travel to unbeaten Strasburg tonight.

BERRYVILLE — There’s something to be said about being in the right place at the right time and Titus Hensler was that guy for the Clarke County football team.

Hensler recovered a fumble to set up the go-ahead touchdown and fell on another with Central making a potential game-winning drive late in the fourth quarter as the Eagles knocked off previously unbeaten Central 13-7 in a Bull Run District slugfest at Wilbur M. Feltner Stadium on Friday.

Kyler Darlington rumbled for 180 yards on 28 carries and scored both touchdowns as Clarke County (3-0, 1-0 district) made two big special teams plays and rode a defense that limited the high-scoring Falcons (3-1, 3-1) to 207 yards and one score.

“I couldn’t be more proud of a coaching staff and a group of kids,” Clarke County coach Casey Childs said after his team ran out nearly five minutes of clock after Hensler’s fumble recovery. “Words can’t describe how happy I am, especially how we did that. … It was the way our kids fought their tails off. I thought defensively we played outstanding.”

While special teams played a big part of the Eagles’ win, it was looking like a missed extra point could have cost Clarke County the contest.

Like they did at the end of the first half, Central began a methodical march as it started from its own 11 after a Clarke County punt with 10:22 to go.

Eleven consecutive running plays, including a 26-yard run by quarterback Ashton Baker on 4th-and-4 from the Falcons’ 31, moved the ball to the Clarke County 12.

On second down, Central battering ram Isaiah Dyer found a crease up the middle, but fumbled forward as he was hit. The ball rolled to the 1 before Hensler slid on top of it.

No one seemed to know who exactly poked the ball loose.

“It was either Kyler Darlington or Will Booker who hit him from behind,” Hensler said. “I just covered it on the 1-yard line. … You can make a play on any given down.”

Childs said he’s not surprised that Hensler, who dedicated himself in the weight room in the offseason, was johnny-on-the-spot for the recovery. “He’s a smart kid, a great kid,” Childs said. “To see him make that play, you turn around and you see the whole field and sideline going nuts. That was special.”

But with 4:53 left on the clock, the contest wasn’t by any means finished and the Eagles were only three feet from their goal line.

They turned to Darlington, who had pounded the Falcons’ defense all night long, with many of his yards coming after contact.

On first down, Darlington followed quarterback Matthew Sipe’s block and broke off a 14-yard run to give the Eagles some breathing room.

“It was nerve-wracking,” Darlington said of the situation. “I was five yards (deep) into the end zone. We ran a play into the middle and I bounced out. That gave us some space and we ended up winning the game from that.”

Milking the clock for all it was worth, Clarke County continued to get first downs against the Falcons, who had just one timeout remaining. Darlington gained 16 yards, but lost a yard on the next play. Cordell Broy then swept left for 12 yards and a first down. After Darlington gained a yard, Central used its timeout with 1:48 left. On the next play, Darlington broke loose again for 13 yards and another first down. The Eagles went into victory formation and ran out the clock from there.

“Offensively, we ran our five-minute offense and we got three or four first downs,” Childs said. “Our line did a great job and Kyler, he just plowed. Cordell made a great run on the sweep to get a first down.”

Broy made a big play to get the Eagles on the scoreboard in the first quarter. After a fumble had halted their first drive, Clarke County forced a punt.

The kick was short, but instead of letting it drop Broy raced in and snagged it while running full speed. He bounced off a couple of tacklers and tip-toed down the right sideline until he was knocked out of bounds at the 18. Three plays later, Darlington scored from seven yards out to make it 7-0.

The lead held up until late in the half. Starting at its own 16, the Falcons’ marched 84 yards on 15 plays. A 25-yard screen pass to Dyer and a 19-yard run by Baker keyed the march, which was capped by Tyler Forbes’ six-yard TD run with 1:15 left in the half.

The Eagles were forced to punt on their first drive of the second half, but Christopher LeBlanc’s punt was muffed and Hensler scooped it up. He couldn’t advance the ball, so the Eagles took over at the Central 29.

They need just one play to score as Darlington barreled around the right side, broke three tackles and carried a defender across the goal line to make it 13-7.

“I had a great hole,” Darlington said of the TD run. “I think I made a few guys miss and I fell into the end zone. It was just a well-designed play by us.”

Childs said Darlington’s big night was a byproduct of the 6-foot, 190-pound junior’s work off the field. “Kyler has committed to the weight room,” Childs said. “If you look at him, he’s nothing but a muscle. He has come so far from last spring. It’s amazing.

“We’ve had a great run of tailbacks for a long time in the single wing,” Childs added. “He fits that mold. He’s just a really tough kid and he runs behind his pads. He’s sneaky athletically and he makes guys miss when he has to. Running after contact, he was all about that tonight.”

The Eagles’ defense made that score hold against a team that entered the contest averaging more than 44 points per game. Childs thought the defensive line and especially freshman linebacker Carson Chinn did an excellent job at slowing Dyer, who had 77 yards on 20 carries.

“We knew we had to get him at the line of scrimmage,” Child said of Dyer. “We couldn’t let him get four or five yards and get going because he’s gets that steamroller effect and gets going ahead. We were really good up front. We didn’t contain him a couple of times which upsets me, but we were really good inside the tackles. We took away the fullback dive which has been a big play for them.”

“That just proves how good we can be,” Darlington said of the defensive effort. “We did great up front.”

Central coach Mike Yew, whose team was playing its fourth consecutive road game, said it was a physical contest.

“I think the teams that left there tonight, both of them will be sore through the weekend,” Yew said. “I’m extremely proud of our kids. Yes, a couple miscues but that’s high school football. We’re not gonna hang our hat on the miscues. We’re gonna learn from them.”

The Eagles, who play at unbeaten Strasburg (3-0) next Friday, are hoping to build, too.

“Central was ranked pretty high and we showed out tonight,” Hensler said. “I think this should be good for us.”