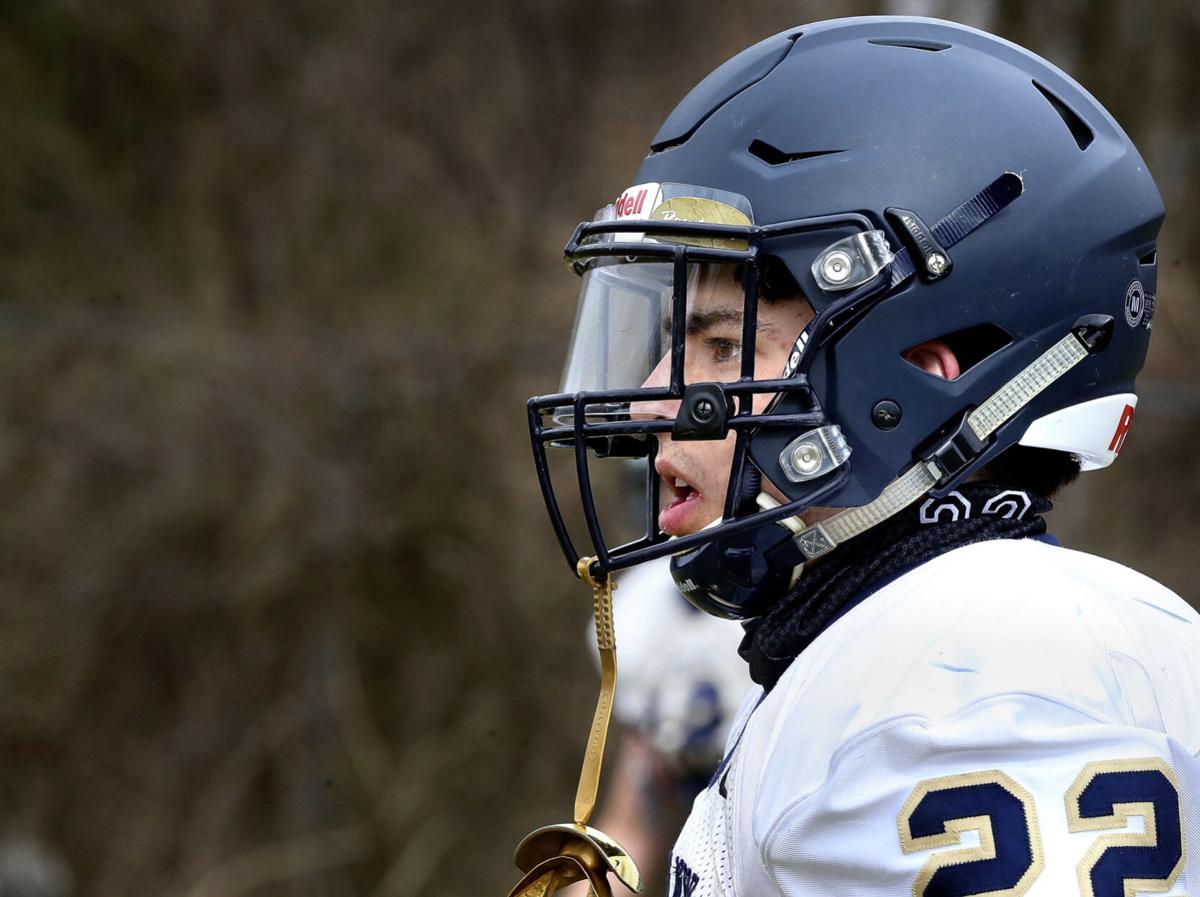 James Wood wide receiver/defensive back Jaden Ashby was a Winchester Star first team All-Area selection as a receiver and kick returner in 2019. 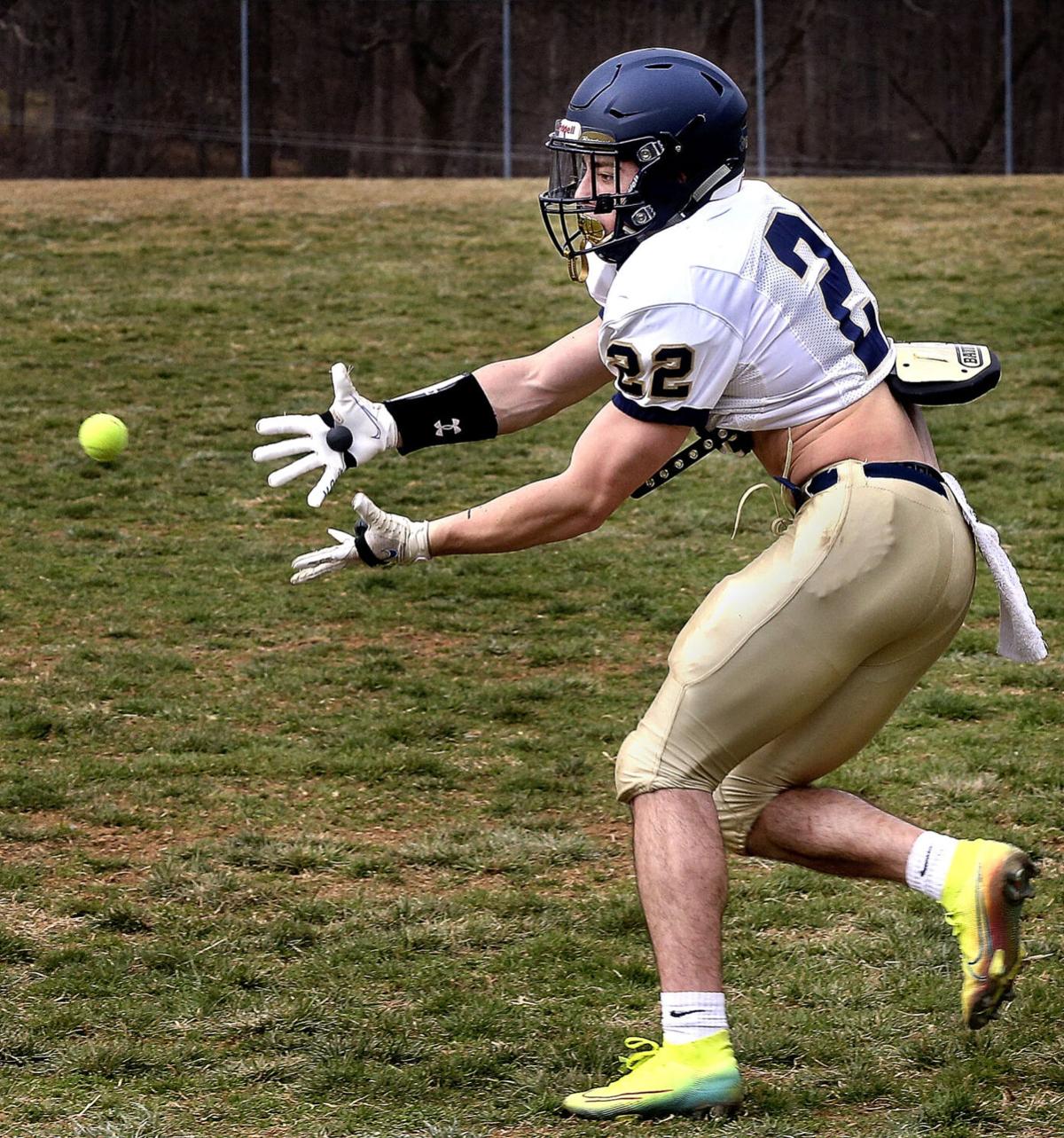 James Wood wide receiver/defensive back Jaden Ashby catches a tennis ball during hand/eye coordination drills Tuesday at the school. As a sophomore, Ashby broke school records with 48 catches for 777 yards and 10 touchdowns.

James Wood wide receiver/defensive back Jaden Ashby was a Winchester Star first team All-Area selection as a receiver and kick returner in 2019.

James Wood wide receiver/defensive back Jaden Ashby catches a tennis ball during hand/eye coordination drills Tuesday at the school. As a sophomore, Ashby broke school records with 48 catches for 777 yards and 10 touchdowns.

That’s because the junior is one of those rare three-sport athletes who plays football, basketball and baseball.

So when pretty much everything shut down last March, Ashby could have, too. But instead, he chose to make the best of a bad situation.

And as the Colonels prepare to open their season at Goochland on Friday, the difference in Ashby is striking. The junior wide receiver/defensive back has tacked on 35 pounds of muscle and now stands 6-foot and weighs in at 185 pounds.

“Over quarantine, I was in the gym all of the time,” Ashby said. “I was trying to get bigger, trying to get better, faster, stronger. I’ve been grinding. I was really dedicated.”

Ashby said he and teammate Andrew Waters spent much of the summer fishing and hitting the weights in the basement gym set up at his house. Those sessions would often last three or four hours.

“Every single day we would go to work,” Ashby said. “We made each other better.”

It was very apparent in the recently concluded basketball season that weightlifting had paid off for Ashby. The beef around his shoulders and in his legs certainly was a striking difference for a player who started off his sophomore football season weighing 150 pounds.

Ashby says he is currently benching 295 pounds, squatting 420 and deadlifting 465, numbers that many offensive linemen would be proud to have.

“He’s a lot stronger,” James Wood football coach Ryan Morgan said. “He spent a lot of time in the weight room since COVID hit last spring. He started working out on his own. Now he is one of the stronger kids on the team.”

As his work on his own suggests, he’s also one of the most motivated Colonels on every field of contest.

With the compressed sports seasons in Frederick County, Ashby often is practicing other sports, while competing in another.

“It’s definitely busy,” he said prior to the end of the basketball season on Monday. “It’s one right into the next. I’m practicing football and then there’s basketball practice right after. Then, it’s baseball practices in the cages the next day.”

But Ashby is determined to not only play the sports he loves, but to be an impact player. He was a starting guard on the basketball teams and was a baseball starter as a freshman.

Of the three, certainly one stands out, though.

“It’s definitely football,” he said. “Football is just different for me. When I’m on the field, it feels different. I love it.”

As a sophomore, he rewrote the record book for receivers at James Wood. His 48 catches for 777 yards ad 10 touchdowns were all school marks. He also set a record with four touchdown receptions against Warren County.

“He’s one of the better skills players we’ve had,” Morgan said. “As far as ball skills, he’s able to track the ball. He’s got really good hands. He’s got quick twitch ability and he’s got good speed. We don’t typically get athletes like him at James Wood. It’s kind of a breath of fresh air to work with him a little bit.”

As a freshman, Ashby spent most of his time on the JV squad, since the Colonels had some experienced skill players on offense. He scored 22 touchdowns for the JV team. He did come up and play some defensive back on the varsity at the tail end of the season.

“JV was kind of slower and not to be cocky I was better than that,” he said. “Being able to play with the older guys and learning new experiences and stuff like that got me a lot better.”

It certainly showed on the field. Paired with running back Sam Adkins, who rushed for 1,115 yards, and Will Crowder, one of the fastest players in the area, Ashby thrived. He breakaway ability was evident in both receiving, running and returning the ball. He was a Winchester Star first team All-Area selection as both a receiver and kick returner (averaging 22.4 yards on kickoffs and 18.1 on punts).

Ashby relished being a slot receiver in the Colonels’ spread offense.

“All throughout middle school I was a running back and just did sweeps and stuff like that,” he said. “Once they told me I would be in the slot, I put in the work and did more route running. I had never run routes and had been a receiver. I worked on that. It was a new spot for me and it was a good feeling.”

Morgan said Ashby has done some excellent work with receivers coach Jordan Hartman in both running routes and understanding the passing game.

He figures that precision will be important since opposing defenses have a good idea what to expect from Ashby. He said that the Colonels are going to have to be creative within the confines of the offense to get Ashby the ball in space, where he can do the most damage.

“Last season, Jaden was a little bit of an unknown,” Morgan said. “We figure teams are going to focus on him a little bit now that players like Sam Adkins and William Crowder have graduated. He becomes the focal point of some defenses probably. We have to find different ways to free him up and move him around without changing our offense altogether for him. We have some athletes who can take advantage if teams are paying too much attention to Jaden.

“You need to be able to threaten defenses in different ways,” Morgan added. “His ability to run, to get the ball in space and make people miss and to get downfield to take the top off of the defense are things that we don’t always have. It frees us up to throw the ball and run the ball, even if he is not the one who is always getting it.”

Even with a lack of camps this summer, college teams are paying attention to Ashby. He ran a 4.5 40-yard dash at one camp at Frostburg State and he says some programs have contacted him.

“It’s been my dream since I was little to go play college somewhere,” he said. “That’s all I want right now.”

He’s encouraged by seeing so many of the players he played with and against finding success at the collegiate level.

“There’s been some great guys from around here who went to some great schools,” he said. “I look up to them and I want to be where they are at today.”

He credits much of his success to his older brother Dylan, who ran college track at Wesley College. Dylan, who is 25 now, put his younger brother through the paces at an early age. Jaden said that speed is definitely why he is able to excel at three sports.

“[Dylan] would train me,” Jaden said. “That’s how I got fast. He would push me a lot. Honestly, I was like seven and we would go out for runs and push me to work harder. There would be drills. He made me a better athlete.”

Ashby says he’s toyed with the idea of running track in addition to playing baseball in the spring, but right now the focus is on football.

“I can’t wait,” Ashby said. “I’ve been waiting for this for over a year now. I’m itching to get on the field. It’s going to be so much fun.”

Morgan has no worries that the player who he calls “a quiet kid” will put in the time to excel. This time off during the pandemic showed that.

“He’s a hard worker and has goals he wants to achieve,” Morgan said. “We don’t have to get on his case to get in the weight room or work on his game or skills. That’s a focus for him and he works pretty hard at it.”

Ashby, who says it’s important to play these for games for the 10 seniors on the squad, made the offseason pay off.

“I hated that our season got put into this situation, but it helped me to get to where I want to be.”