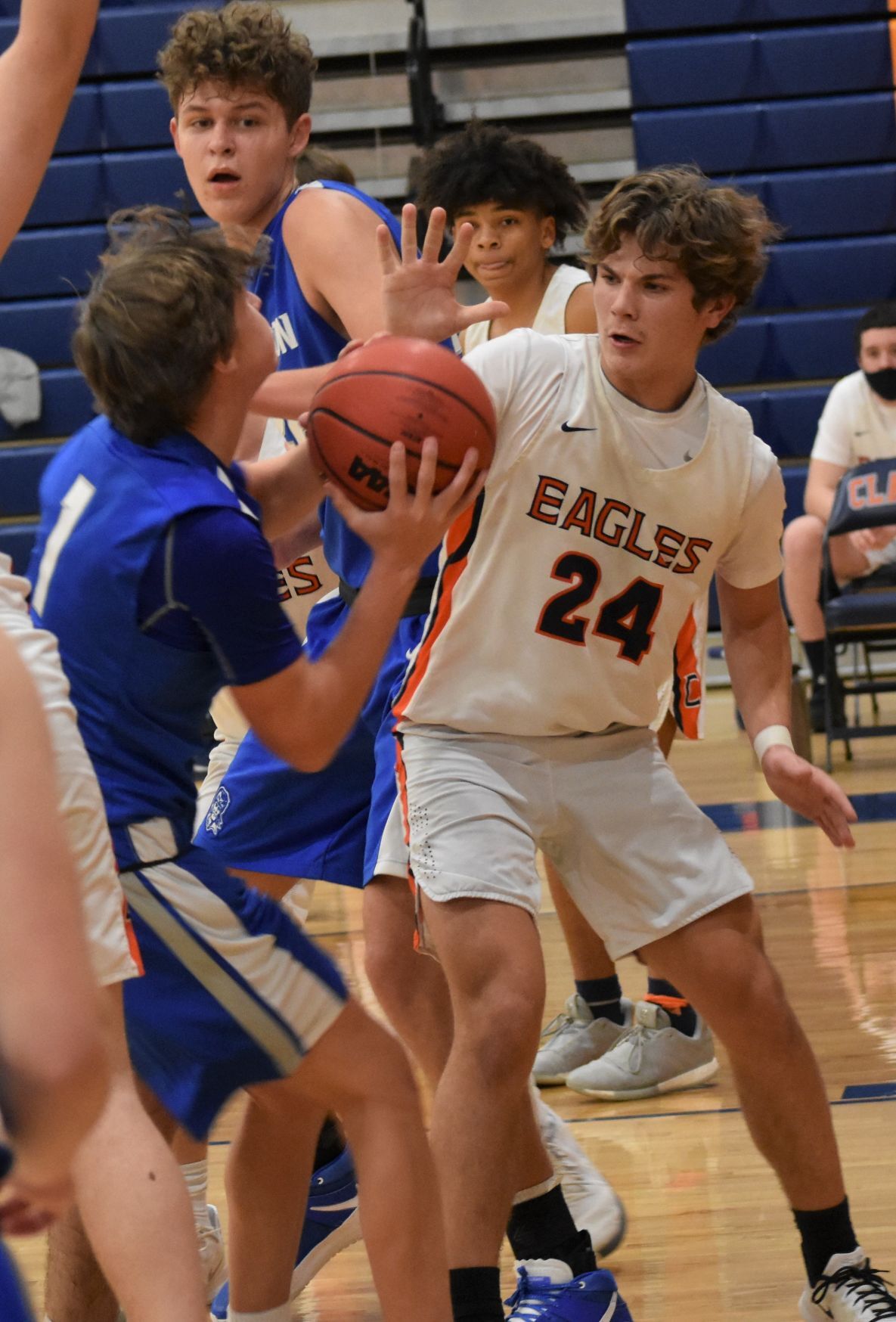 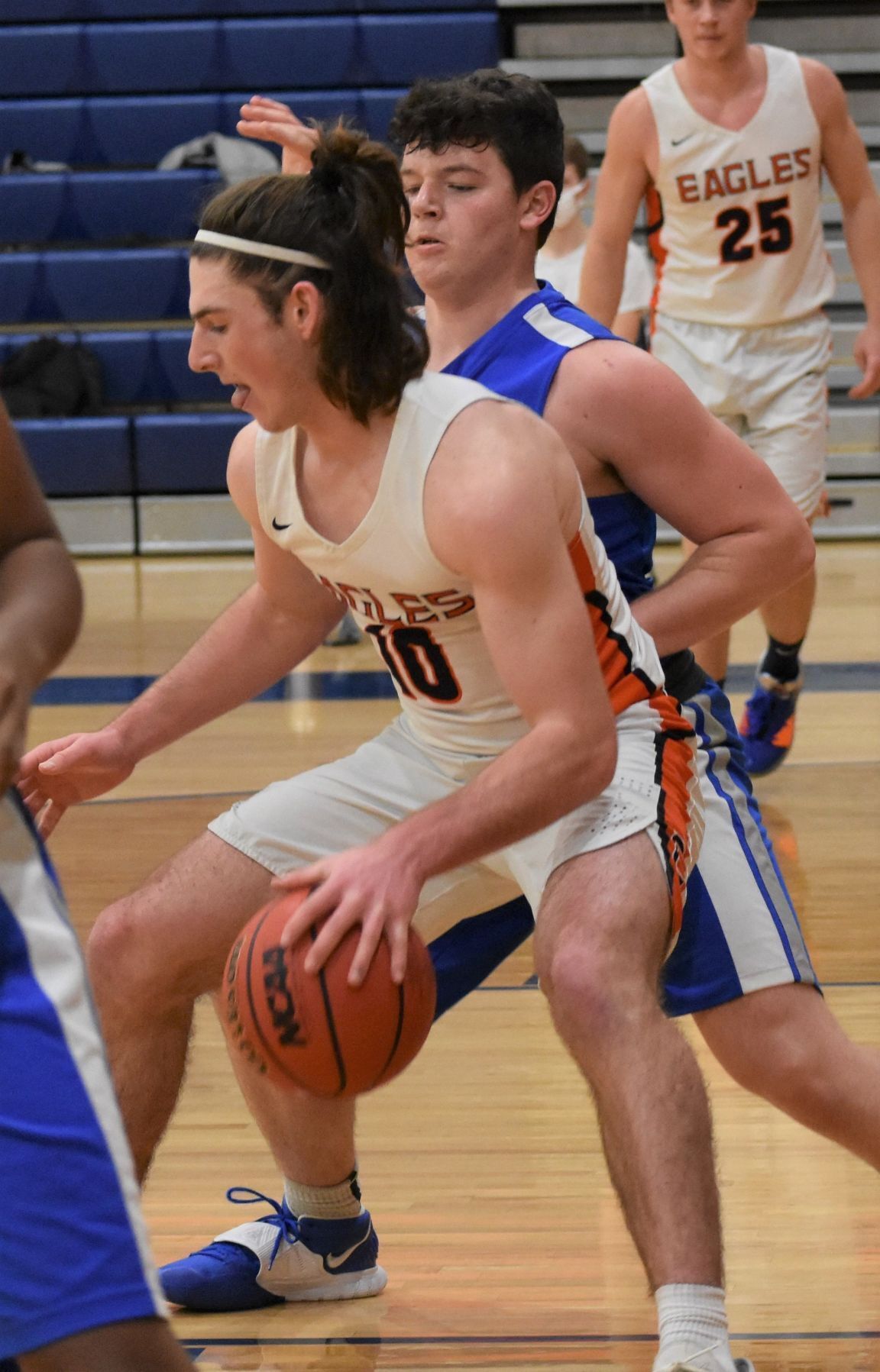 Clarke County's Luke Lyman makes a move on Madison County's Wade Fox during the second half of Tuesday's game. Lyman scored 17 points in the Eagles' 63-39 victory. 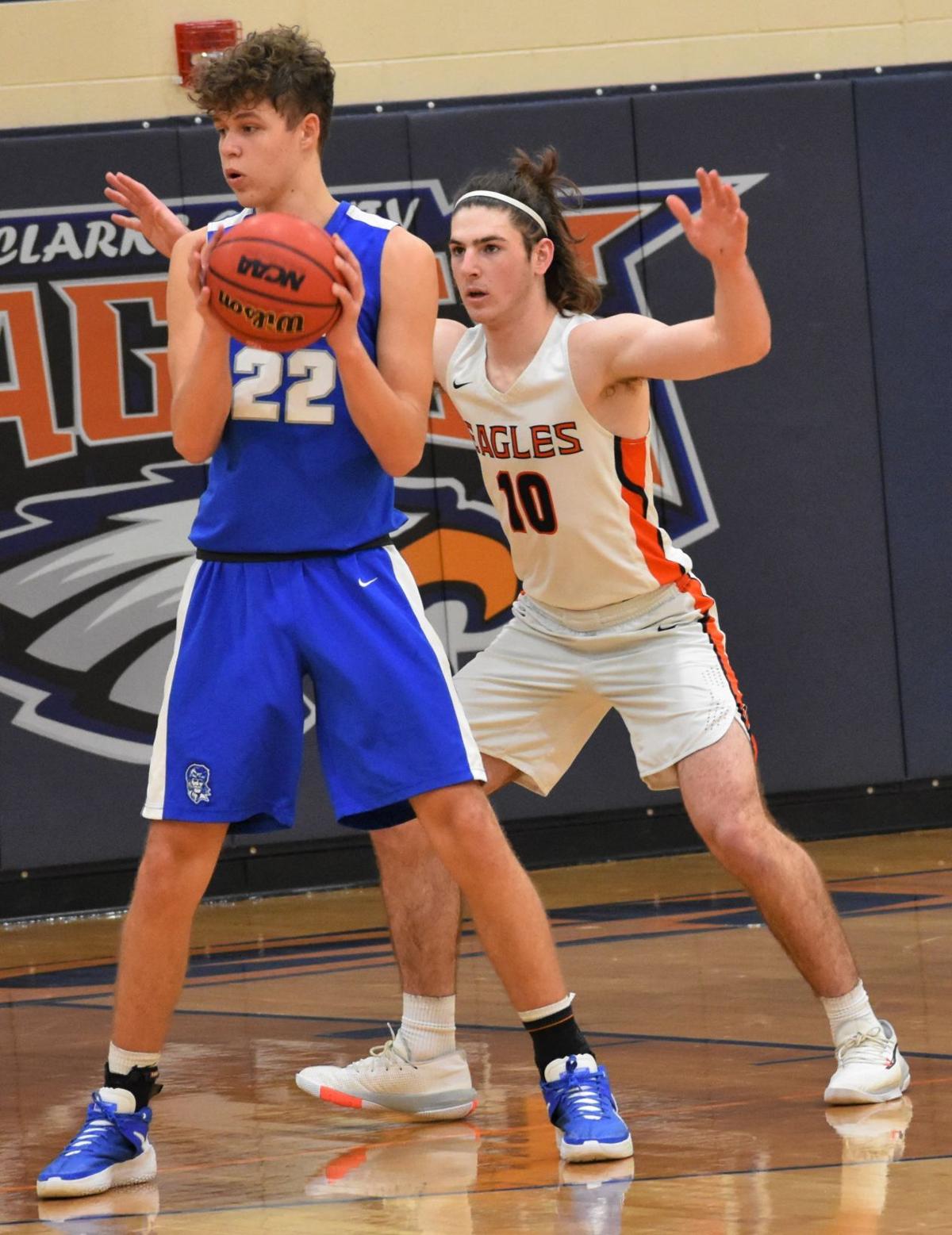 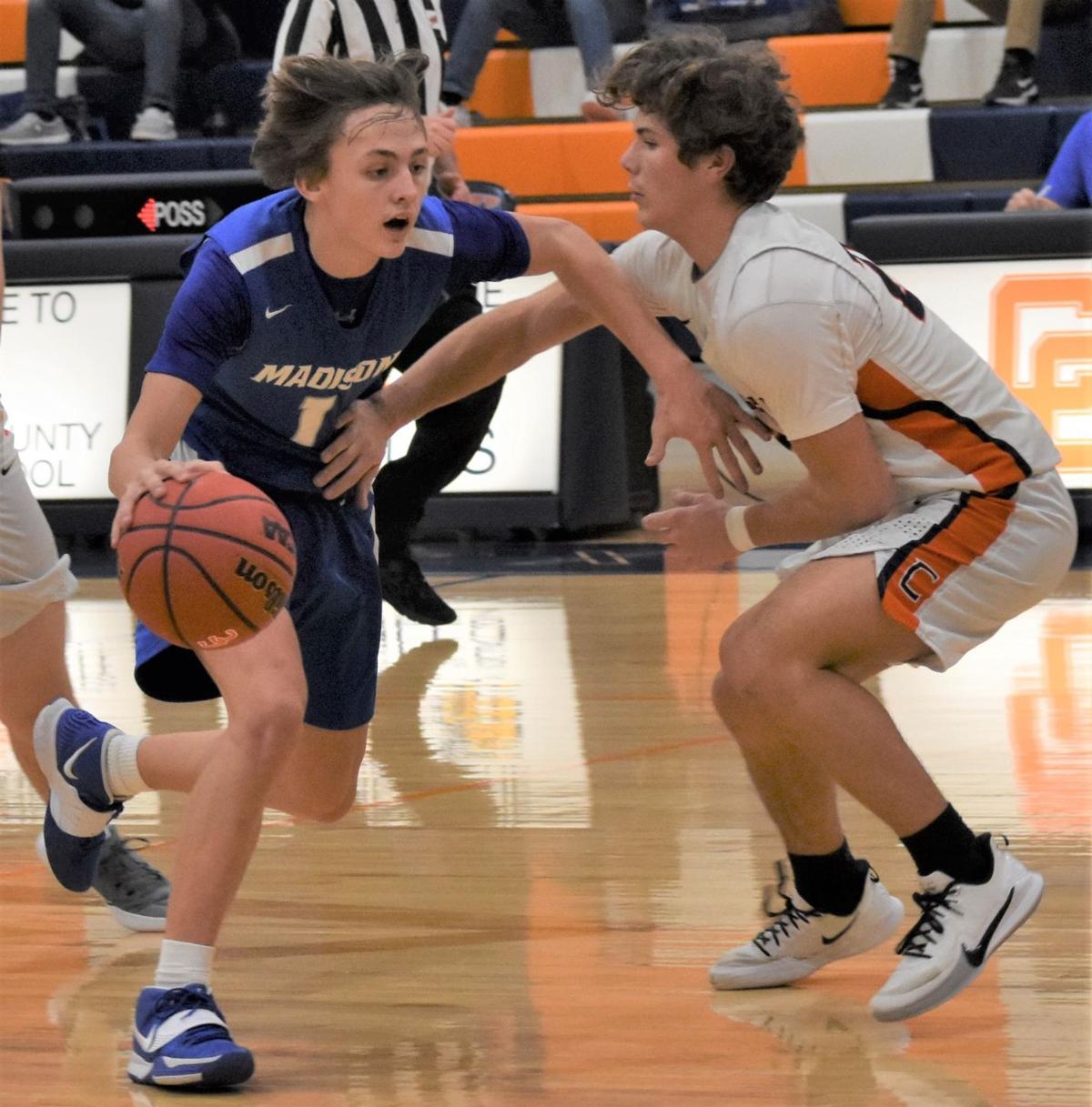 Clarke County's Luke Lyman makes a move on Madison County's Wade Fox during the second half of Tuesday's game. Lyman scored 17 points in the Eagles' 63-39 victory.

And with a little help from his teammates, he did just that and more.

Sipe held Taylor, who entered the contest with a 25.5 scoring average, to just 13 points while scoring 14 himself and Luke Lyman delivered six of his 17 points in a key stretch as the Eagles pulled away to a 63-39 romp in their home opener in Bull Run District boys’ basketball play.

Sipe, a sophomore guard, set the tone from the beginning against Taylor, who had scored 27 and 24 points in the Mountaineers’ two wins this season. Taylor was held scoreless in the first quarter and made just two baskets in the second half as the Eagles pulled away.

“I feel like I played great defense on him, the best I could have done,” Sipe said. “I probably could have done better [overall], but I did what I had to do for my team — play some defense.”

“He wants to play defense,” Eagles coach Brent Emmart said of Sipe. “He’s quick and athletic. He slides his feet. He just accepts the challenge of trying to ‘D’ people up.”

The Eagles led 9-7 after one quarter, but Taylor struck for five quick points to open the second period to give the Mountaineers a 12-11 lead.

Brandon Hindman’s 3-pointer then triggered a 12-0 run that gave the Eagles the lead for good. Sipe’s 3-point play pushed the margin as high as 28-14 and Clarke County led 28-16 at the half.

At the break Emmart was still concerned with defending Taylor, who would take a handoff and accelerate around the screen to the hoop. Often the play would force the Eagles to switch defenders.

“Coach told us about the flip play they’ve got, so I was just trying to keep him away from that because as soon as he would get it he would go straight downhill and straight to the basket,” Sipe said. “I think we did a decent job doing it and locked him up and got the win.”

The other thing that concerned Emmart at the break was starting the third quarter strong and that did not happen. The Mountaineers scored the first seven points to slice the margin to 28-23 with 5:36 left.

But following a timeout, Lyman took over in what became a 14-0 run. The junior worked a perfect pick-and-roll with point guard Deonte Trammel for a basket, converted an offensive rebound and made a layup for six quick points to push the lead back to 34-23.

“Once we had that, the momentum totally changed,” Lyman said. “After that, it was game [over].”

“Out of the timeout, we talked about just wanting to dump it in to him and to work from inside out,” Emmart said of Lyman. “He collapses the defense and opens stuff up for us on the perimeter. We were just trying to get high percentage shots when they made that run. The guys did a great job coming out of the timeout knowing exactly what we wanted. I’m happy we got those six straight points in the paint because those are high-percentage shots.”

Lyman has been a force for the Eagles thus far. He’s scored in double figures every game and has controlled the boards.

“I’ve definitely gotten a lot stronger,” said Lyman, a 6-foot-4 junior who is also a standout on the Eagles’ football and baseball teams. “I’ve worked on my post moves and to work the ball in the post and kick it out.”

While Lyman did not rack up huge numbers as a sophomore, Emmart said last season laid the groundwork.

“He’s just stronger and a year older,” Emmart said. “He understands the game and it’s slowed down a little for him compared to last year. Last year’s battles got him ready for this year. He’s just seasoned a little more.

“He’s a load down there,” Emmart added. “People don’t realize how strong he is. He’s got long arms. He’s hard to handle down there with his strength.”

After Lyman’s initial baskets, the outburst continued. Ellis Nei scored the final six points in the run, capping it by nailing a baseline jumper while being fouled for a 3-point play. Nei, a track standout, would score eight more points in the final quarter and finish with a team-high 18.

Led by Sipe’s play, the Eagles’ defense made life miserable for the Mountaineers, who trailed 42-29 entering the final quarter and never got closer.

“His energy on defense was contagious,” Emmart said. “We got some run outs. We got some steals.

“Our defense created a lot offense with run outs and fast breaks. We have a lot of team speed and we do a good job getting up and down the floor. Any time we can get some offense with our defense and transition, it makes everything so much easier.”

Sipe also went 8 for 9 from the foul line, while Nei was 6 for 7. Clarke County finished the game with a 31-3 edge in free throws attempted and a 20-0 edge in made foul shots. The Eagles attempted 13 of those foul shots in the final quarter as they held the ball.

Emmart was happy with the way his team (2-1) rebounded from a loss to Page County on Monday.

“The guys did a great job,” he said. “They brought a lot of energy after a rough outing last night. We were disappointed. We talked about learning from our loss last night which shouldn’t have happened to us. We made two steps in the right direction tonight.

“I’m extremely proud of the guys. It was fun to watch them play that hard. They were rewarded for that tonight.”

Taylor, who finished 5 for 19 from the floor, led Madison County with 13 points. Eight of the 10 Eagles who played scored at least two points. Emmart emptied the bench with just under two minutes remaining.

“When you have a close game, sometimes it’s hard to get everybody involved,” Emmart said. “It was just nice to get a great team win tonight. Everybody left out of here and they felt good about themselves — individually and as a team.”

His players certainly were enthused.

“This is a good win,” Sipe said. “We’ve only lost one. Hopefully we keep going and keep winning. We’re ready for whatever comes at us.”

“We have a great squad, actually,” Lyman added. “I think we could go deep this year.”

Notes: The Eagles honored Ian Clapp, Brendan Moyer, Trey Trenary (injured and cannot play this season) and Nei on Senior Night. … Clarke County’s home game Friday with Strasburg has been moved to 6 p.m. on Jan. 30 because of COVID-19 quarantine with the Rams. The JV teams for the two schools will play at 6 p.m. Friday. Clarke County’s games against Luray on Monday and Wednesday have been postponed as well. The makeup dates have not been announced. ... Clarke County’s next game is at 6 p.m. tonight at home against Stonewall Jackson.