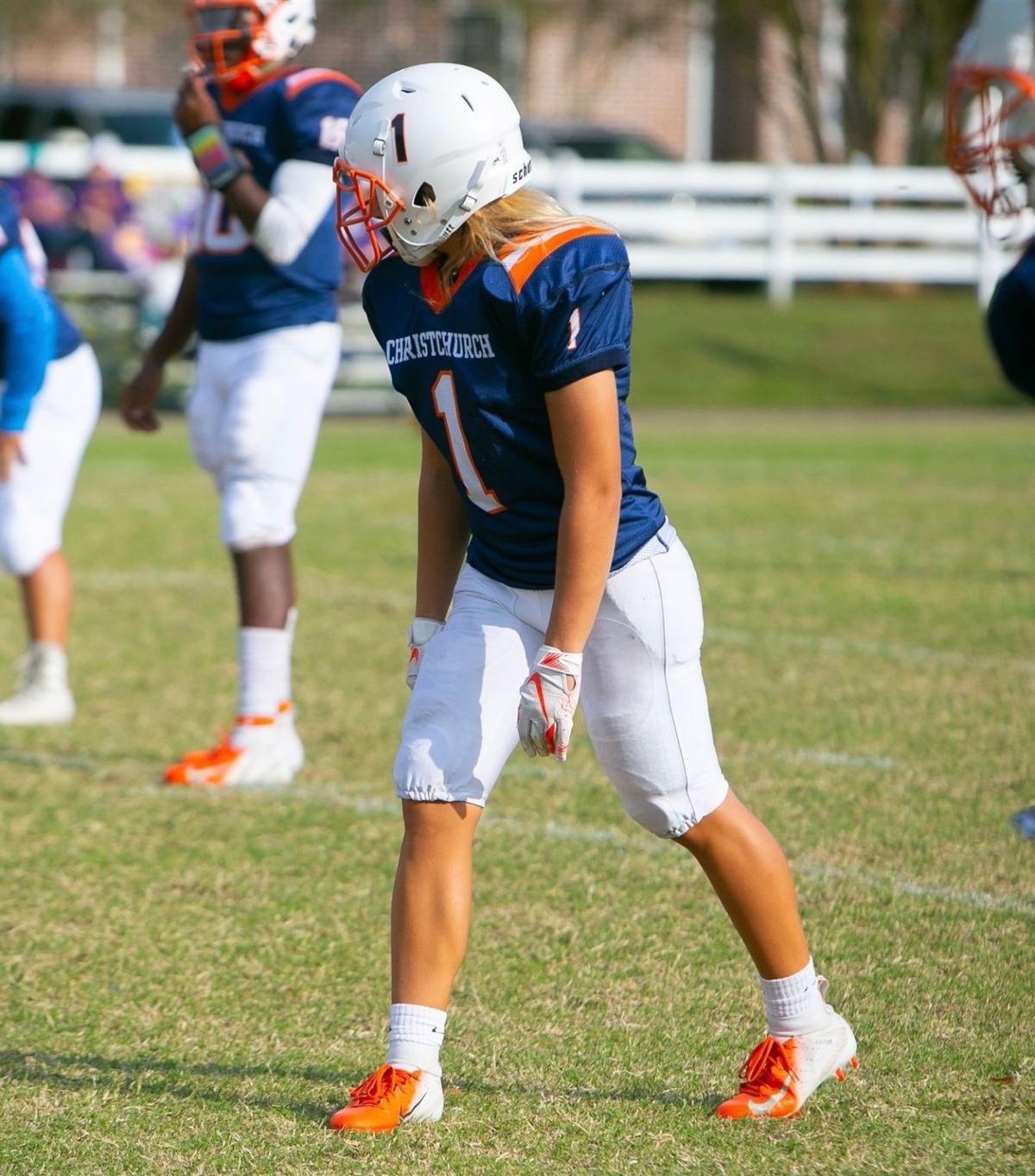 Fauquier County resident Haley Van Voorhis has committed to play football for Shenandoah University. A defensive back and wide receiver, she will be the first woman to play a position other than kicker or punter on an NCAA team.

An unprecedented achievement will take place when defensive back/wide receiver Haley Van Voorhis suits up for the Shenandoah University football team this summer and fall.

On Wednesday, Van Voorhis — a 17-year-old resident of The Plains in Fauquier County — announced she had committed to play for the Hornets’ NCAA Division III football team. She will be the first woman to play a position other than kicker or punter on an NCAA team.

In a phone interview on Wednesday night, the 5-foot-6, 150-pound Van Voorhis said she wasn’t thinking about breaking new ground when it came to playing football in college. She loves the game, and she just wanted to keep her career going and play at a higher level. But she does hope others will try to follow her path.

“It’s pretty big for me [to play in college],” said Van Voorhis, who was offered a spot on the team by SU on Dec. 11 and is an option at either defensive back or wide receiver for the Hornets. “I guess this is huge not just for me, but to sort of pave the way for other people.”

Van Voorhis has been playing tackle football since she was in sixth grade. She played in a Fauquier County boys’ league for three years, joined Kettle Run’s junior varsity team her freshman year in high school, then transferred to the Christchurch School, a boarding school located one hour east of Richmond.

Van Voorhis played for Christchurch as a sophomore and junior, but the school did not have a football season this year due to COVID-19. In a Washington Post story in February, 30-year head coach Edward Homer said Van Voorhis was set to be a team captain and would have been a starting slot receiver had there been a season.

“She’s a badass,” Homer told the Post of the athlete who has also played on the girls’ basketball and girls’ lacrosse teams at Christchurch. “She’s not afraid of anything.”

Her determination is one of the reasons why the Hornets want her to be part of their program.

After SU received game film of Van Voorhis from Homer, SU defensive backs coach Byron Mitchell watched her participate at a college scouting combine in Richmond in early December. Van Voorhis said within a couple of hours after the completion of the combine, Mitchell invited her to come to Winchester and tour SU’s campus on Dec. 11.

When she visited with her father, she was offered a spot on the team that same day.

“I knew no [female non-kicker or punter] for NCAA has been offered in general, so to be offered on the spot was kind of big for me,” said Van Voorhis. “[I thought], ‘They actually really want me.’”

SU ninth-year head coach Scott Yoder said Mitchell was impressed with Van Voorhis’ athleticism and skill when he saw her at the combine, and could tell she was serious about college football. Yoder was also impressed by her attitude when he met her.

“You spend five minutes with her, and you realize that she’s been working at this a while, she’s a hard worker, she understands the game, and she’s coachable,” Yoder said.

While he’s glad SU can given Van Voorhis an opportunity to compete, Yoder said the Hornets have a similar mentality to Van Voorhis in this situation. They’re not looking to break any barriers. They’re just trying to make their program better.

“I know why people are going to make a story out of this, and I get it,” said Yoder, whose teams went 23-17 over the previous four seasons before going 1-4 this spring. “But at the same time, she wants a collegiate football experience. We didn’t recruit her for the story.

“We recruited her because we think she can help our program, just like the 40 other people we’ve recruited. She’s earned a spot on the team. We evaluated her. We’ve been doing this for a long time. We’re excited to coach her up.”

Van Voorhis said she’s wanted to play college football throughout her high school career. She said Homer has always supported that dream while she’s been at Christchurch.

“He never said I couldn’t do it,” Van Voorhis said. “He was always pushing me to reach my goal of that.”

Van Voorhis was already being recruited by Fitchburg State University in Massachusetts before SU contacted her, though she said the recruiting process was never as involved as it was with SU. Ultimately, Van Voorhis wanted to take her time before deciding on her future school, and she feels she found a team and a school that she feels comfortable with in Shenandoah.

“I really like their culture just around sports in general there,” said Van Voorhis, who plans to study business. “I like the sense of community. They seem to have a strong football program, and they have an amazing field and facilities. That really stood out to me. And their academics are strong.”

Van Voorhis — who can squat 285 pounds — said she’s ready to help SU at either defensive back or wide receiver, because she feels she’s a good tackler and has good hands. And Homer says she’s more than willing to do what it takes to make herself better.

“She’s always early to practice and usually the last to leave,” he told The Washington Post. “And she’s working out all the time.”

Van Voorhis is continuing to stay in football shape this spring. In February, she began practicing with the D.C. Divas professional team in the Women’s Football Alliance. (Van Voorhis is not being paid or having her expenses paid for so she can retain her college eligibility.)

The Divas are one of nine teams in WFA Division I, and they will play four games this season beginning May 8. The most recent team roster in 2019 had 53 players on it. Van Voorhis said the team started practicing once a week beginning in early February, and at age 17, she’s the youngest on the team. Van Voorhis said there are players over 30 at the top of the age spectrum.

Yoder said the coaching staff hasn’t discussed the prospect of Van Voorhis joining the team with the players. He doesn’t think it should be a significant adjustment if she continues to keep the same attitude she’s already shown SU.

If she can make the team without special treatment, more power to her!

Good for her. Wonder how the locker room situation will be handled though.