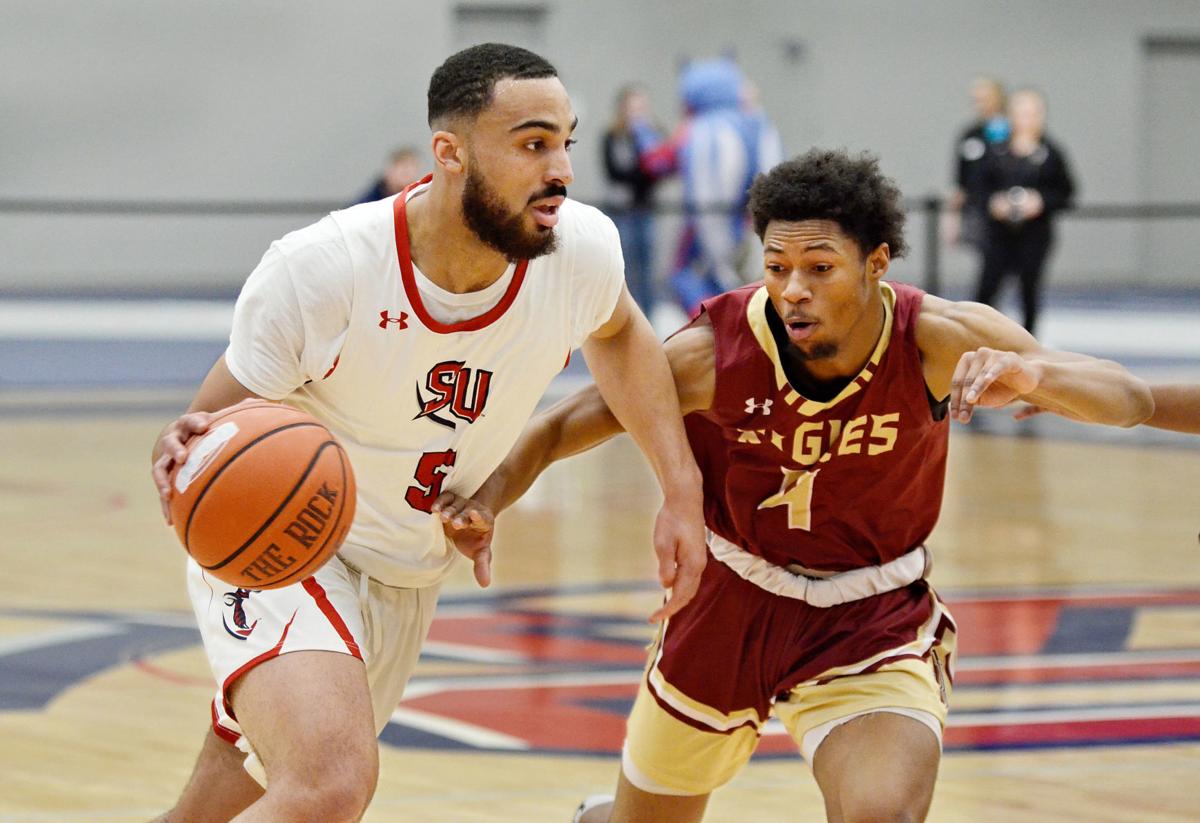 Shenandoah University guard Zach Garrett (5), a transfer from Division I George Mason University, has emerged as one of the Hornets' top offensive weapons this season after enduring a sluggish start.

WINCHESTER — Sometimes the fix is something as simple as seeing a shot go in.

That was the case for Shenandoah University sophomore guard Zach Garrett, whose debut for the Hornets’ men’s basketball program this season has been a lesson in patience and persistence.

Garrett, a transfer from Division I George Mason University, struggled initially to find his footing with his new team. Through his first nine games with the Hornets, the 6-foot-4 Leesburg native was averaging just three points per game, was shooting only 20.6 percent from the floor and lacked the confidence to keep putting up shots.

Garrett didn’t make his first field goal for SU until the Hornets’ third game of the season, and only once in that span of nine games did he score more than six points (a 12-point effort in a loss to Hampden-Sydney on Dec. 7).

But one day after mustering four points in a loss to Methodist on Dec. 27, Garrett made 2 of 5 field goals and went 11-for-12 from the foul line en route to 15 points in a win over Southern Virginia. It was the first of six straight games of netting at least 15 points for Garrett, who is averaging 18 points per contest in that span while shooting 46.2 percent from the floor.

“Just kind of seeing a few go in, just kind of finding my rhythm, finding my groove,” Garrett said last week of his sudden offensive surge. “Talking with (head coach Adam Walsh and assistant coach Austin Peters), just seeing that they do need me to step up and kind of taking that upon myself to say ‘OK, let me go ahead be the guy I need to be for these guys, to help us win some more games.’ Just trying to be everything that I can be and do what I can do to help us, put us in a better position to win games for the season going forward is what I want to try to do.”

Walsh, now in his third season, said Garrett is a player that SU’s men’s basketball program needs to build around in the coming years as it tries to turn itself into a winner, and Garrett has looked the part of program centerpiece since the light flipped on.

Garrett has been SU’s leading scorer in each of the last five games, a run that included a pair of 21-point performances, one in a loss to Roanoke (77-69) on Jan. 11 and the other in a win over Bridgewater (103-97) on Wednesday.

He’s been adept at shooting from beyond the 3-point arc during his recent hot streak and is shooting 45.2 percent (14-for-31) from deep in that span. That’s an area of Garrett’s game that Walsh said is “imperative” for an SU program that has been riddled with injuries to its guards and needs perimeter threats.

Walsh added that Garrett is more than a sharpshooter and is an all-around talented player who can have a “really good Division III career because of that.”

“He’s actually got a really, really good midrange game and we’ve thrown it to him for some isolation stuff where you can kind of go to the [Michael] Jordan, Kobe [Bryant] kind of set of moves that they do from 15 to 17 feet, kind of the shoulder fake, spin into a shot where you can kind of lean back,” Walsh said. “And he’s shooting it over guys. He has that set that from 15 feet we’re probably 70 percent if we give it to him there. ... He feeds off of making that out to the perimeter. His physical strength helps him, being able to finish by some guys, getting some rebounds. He can do all of it.”

As locked in as he is now, Garrett said that there indeed was an acclimation process upon his arrival, one that included getting familiar with new teammates and new coaches and playing meaningful college minutes for the first time.

After walking on at George Mason upon graduating from Heritage High School, Garrett saw action in just four games as a freshman with the Patriots. Though he said he appreciated his time there, Garrett decided he wanted to seek more playing time and sat out the 2018-19 season to keep a year of NCAA eligibility.

By the time Garrett landed at SU for the 2019-20 school year, he’d seen just five minutes of game action at the college level.

“I think sometimes for guys that transfer, the transition can be tough no matter what the level is,” Walsh said. “... It took a little bit for him to get the rust off and to kind of get game comfortable again. I think we’ve started to see it. He’s played really well for the last couple weeks. I think that’s more what we expect from his abilities. I feel good about where he is right now.”

For as little as he played at George Mason, Garrett probably arrived at SU under some high expectations.

Garrett denied that there was any added pressure being a transfer from a mid-major program at college basketball’s highest level and said he didn’t want to be “the guy to take over everything.” He opted instead to figure out where he fit in what he called an already established family.

“It is hard, especially transferring down. Everybody has expectations,” said Walsh, who added that the perception from teammates is that former Division I players are supposed to “ball out” at the Division III level.

“There can be some pressure there. I think Zach did a really good job. To his credit, he stayed in his lane, maybe more than I wanted him to. But I think he’s done a good job of trying to play that balance and find his spots.”

That speaks to what Walsh said is Garrett’s natural leadership qualities that make him an ideal locker room and energy guy for the Hornets.

That’s a role that likely comes easier when the shots are falling, but Garrett said he made sure to keep his energy level high even when he was enduring the frustrating start to his SU career.

“I’m never gonna let my poor performance bring everybody down with me,” said Garrett, who added that the allure of helping Shenandoah build a winning culture in its men’s basketball program was a big part of why he chose to transfer to SU.

“That was another big part of it,” he said, “being able to come to a place that hasn’t won a lot of games, being able to bring my experiences and my talents in here and be like OK, I was a part of something that shifted the culture here, I was part of a team that potentially made a run or could potentially make a run for an ODAC championship and get to the NCAA tournament.”

Walsh said the Hornets need Garrett to be a centerpiece moving forward.

“He’s here, he’s in the program, he needs to be a guy that we’re building around and with,” Walsh said. “... I mean you need eight or nine [players] that you know are gonna bring it every day and then you need guys to be able to build off of that. He needs to be one of our guys."