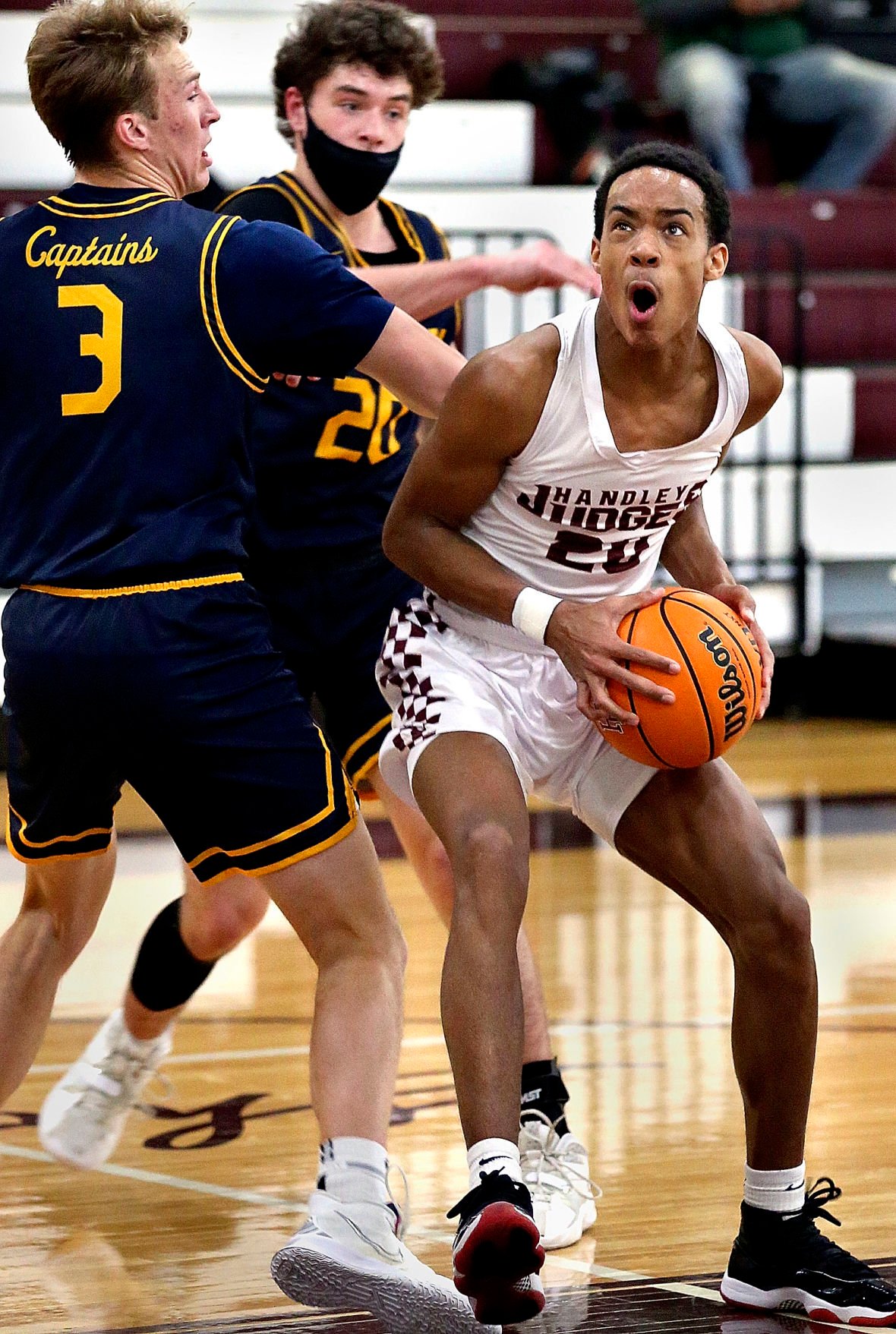 Handley’s Chaz Lattimore is averaging 14 points per game as he has helped the Judges advance to tonight’s Class 4 state semifinal contest at Halifax County. 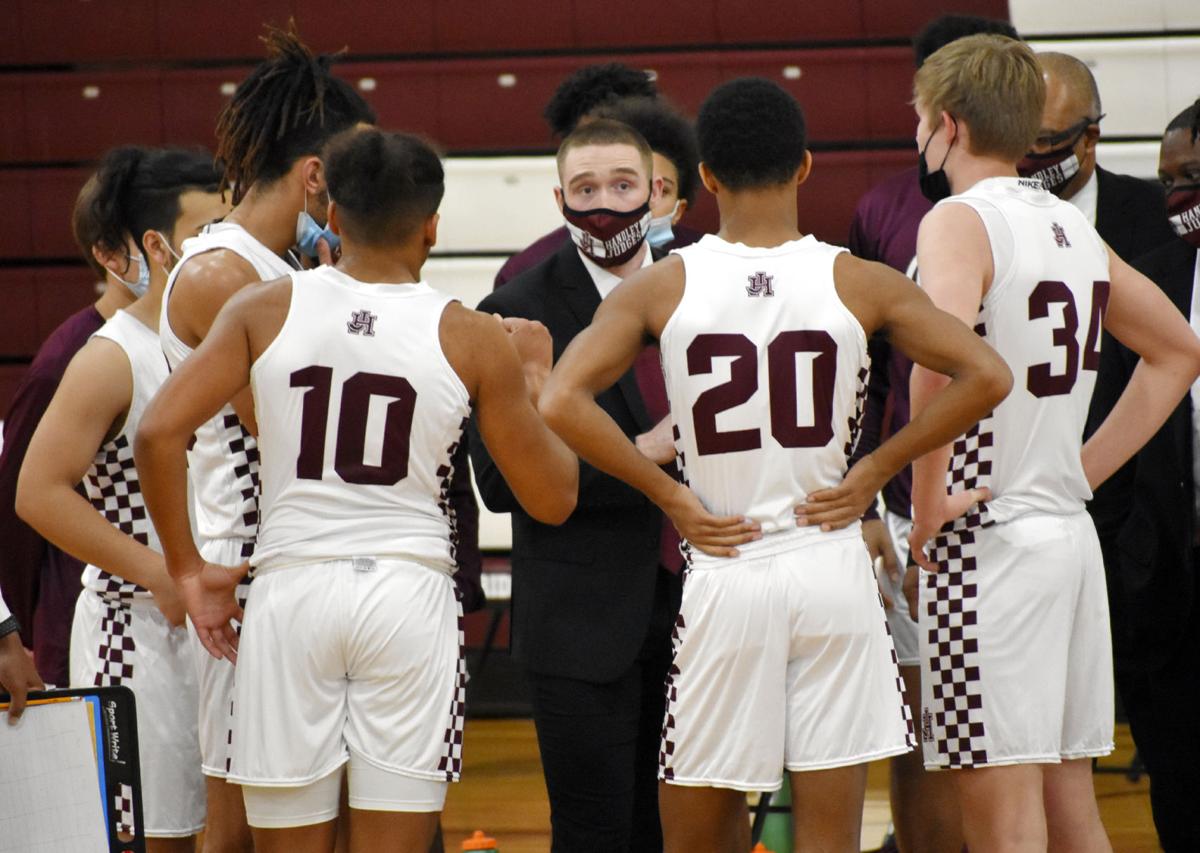 Handley’s Chaz Lattimore is averaging 14 points per game as he has helped the Judges advance to tonight’s Class 4 state semifinal contest at Halifax County.

The singer Meat Loaf had a big hit many years ago with the tune, “Two Out of Three Ain’t Bad.”

For the Handley boys’ basketball team, that sentiment hits a sour note. While the Judges (10-0) have reached the majority of their goals this season, they aren’t willing to settle for 67 percent, especially when the possibility of playing for a state title on their home floor exists.

While their record might not indicate it, the Comets (3-2) fully expected to be in this position, too, before COVID-19 derailed most of their season. Halifax did not open their season until this month and played just two regular-season games, losing both to George Washington-Danville.

Halifax avenged those losses in the quarterfinal round of the Region 4D tournament, beating George Washington 72-58. From there, the Comets won one of the longest postseason games in state history, outlasting Pulaski County 75-69 in five overtimes. In the final, Halifax and Blacksburg were tied 38-38 early in the fourth quarter before the Comets pulled away for a 54-48 win and their third consecutive region title.

“I think it’s easy to look and say they are a team that’s only 3-2, but they are a team where all three of their wins have come in the postseason,” Harrell said. “I think they have handled some of the zones and other things that teams have thrown their way. All of these games have been tight, so they’ve shown they are a team that has the ability to pull games out late.”

After playing on the road in all three of its postseason games, Halifax will host Handley, which must make a four-hour trip to South Boston.

Harrell, a former Millbrook star who played at Roanoke College, says he’s treating the trip like a college game. The Judges will have a shoot-around before leaving early and a walk-through before the game.

“It just reminds me a lot of college in a sense that you have an itinerary for the entire day, rather than just getting on the bus and going,” he said. “It’s going to be an absolute battle. This is a game where we’re going down there on the road. I think anytime you have an extended bus ride like that as soon as you take the floor you’ve got to find a way to be ready.”

Harrell said his squad must be ready for the Comets, who are totally different from the Loudoun County squad his team topped 55-53 in the Region 4C final. While the Captains were more of a halfcourt team, Halifax will run full throttle.

The Comets are very athletic and return several players from a squad that lost a 61-58 thriller against Millbrook in last season’s state quarterfinals.

Halifax is led by 6-foot-5 sophomore Kameron Roberts. In the five-overtime thriller against Pulaski, Roberts netted 37 points, including 10 of his team’s 12 in the final overtime.

“He is very tough,” Harrell said. “He has a very smooth game. He plays well off two feet. He has a very good mid-range jump shot.”

The Comets also are led by 6-foot-3 senior guard Kevon Ferrell, who can do damage outside and inside, especially on the offensive glass.

“Where they have really been getting teams is not necessarily the outside shot, but it’s when they miss and they have someone like Roberts or [Ferrell] to grab an offensive rebound and put it right back up and score,” Harrell said. “Ferrell and Roberts are two we’re going to have to take out of the game and find a way to be there on all of their catches and limit their touches. … Those are the two guys we’re going to have to know where they are at at all times.”

It was thought Halifax could have personnel issues tonight. The Gazette-Virginian reported Tuesday afternoon that Blacksburg officials notified Halifax that more than one Bruins player tested positive for COVID-19 after Sunday’s game.

Later Tuesday, it was determined that none of the Halifax players met the contact tracing requirements of 15 minutes of close contact because the infected Blacksburg players were reserves and did not play a large number of minutes in the game.

The Judges will be led by senior Demitri Gardner, who enters the contest averaging 25.3 points and 10.1 rebounds per game.

“There’s no doubt in my mind that he is one of the best players in the state,” Harrell said. “What has been so eye-opening about Demitri this year is his maturity and his trust in the coaching staff. It’s been so impressive just seeing the young man he’s transformed into. … He’s just matured so much. Knowing you have a kid like that in these types of games, it takes some [pressure] off you as a coach.”

Gardner has scored at least 20 points in each game this season and he’s shooting at a remarkable 59 percent from the floor with many of his attempts coming from outside the paint.

“He’s just really trusting the guys and trusting what we’re doing,” Harrell said. “He’s getting comfortable looks and as good of a player as he is he’s finishing them.”

Harrell believes Gardner will play well against the Comets.

“When you are playing a team like Halifax who is going to get up in you, try to pressure you and out-athlete you, Demitri is a kid who actually prefers that type of game,” Harrell said. “It definitely helps to know you have guys who are willing to go to battle in a game like that.”

It also helps to have a cast that includes Chaz Lattimore. The senior scored three consecutive hoops in the final period as the Judges held off Loudoun County.

Lattimore, who averaged 3.5 points as a junior, is netting 14.0 points per game, while shooting 53 percent from the floor.

Harrell says the difference in Lattimore this season is confidence. “It’s started to mold in him,” Harrell said. “He knows, ‘I can beat my man off the dribble. I can beat my man off this cut.’ I think it showed in the Loudoun County game where he scored seven straight points for us in the fourth quarter. That’s a kid that wasn’t going to do that last year and has found the confidence in himself to do it this year. He absolutely knows we believe in him as a staff.”

But as good as Gardner and Lattimore have been, Harrell says it’s going to take a lot more to knock off the Comets in their own gym.

“It’s going to take 32 complete minutes of basketball,” the first-year coach said. “We’ve talked about how a lot of these teams that we’ve played it is important getting up on them in the first quarter, so that they can’t slow the tempo on us. Halifax is going to bring it to you all game long. They are not going to slow anything down. They are going to be athletes and get up in you and try to trap you.

If the Judges can pull out a win, they would have the opportunity to host the winner between Region 4A champion Smithfield and Region 4B champion Eastern View on Saturday for the state title. Handley has lost a pair of close title games since 2014 and has never won the crown.

“To me, how symbolic would it be that after all of these years of trying to bring one home to be hosting a state title game at Handley,?” Harrell said. “It would just be an incredible experience and I think the guys know that in order to be [fortunate] enough to play in something like that, we would have to take care of business on Wednesday.

“I give them credit that they have found a good balance that they are focused on the task at hand because they know the task at hand gets them closer to their goal. You are not looking past somebody. You realize somebody is standing in your way of what you want to get to.”