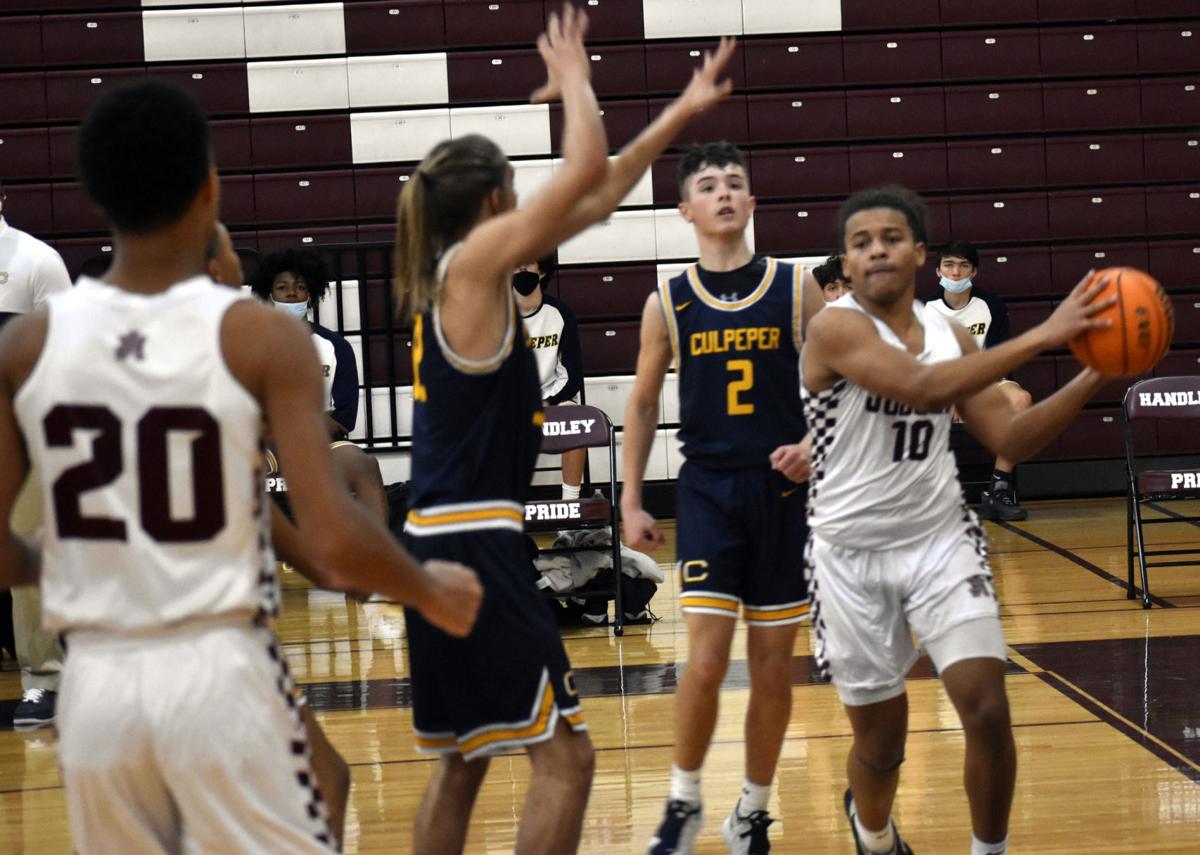 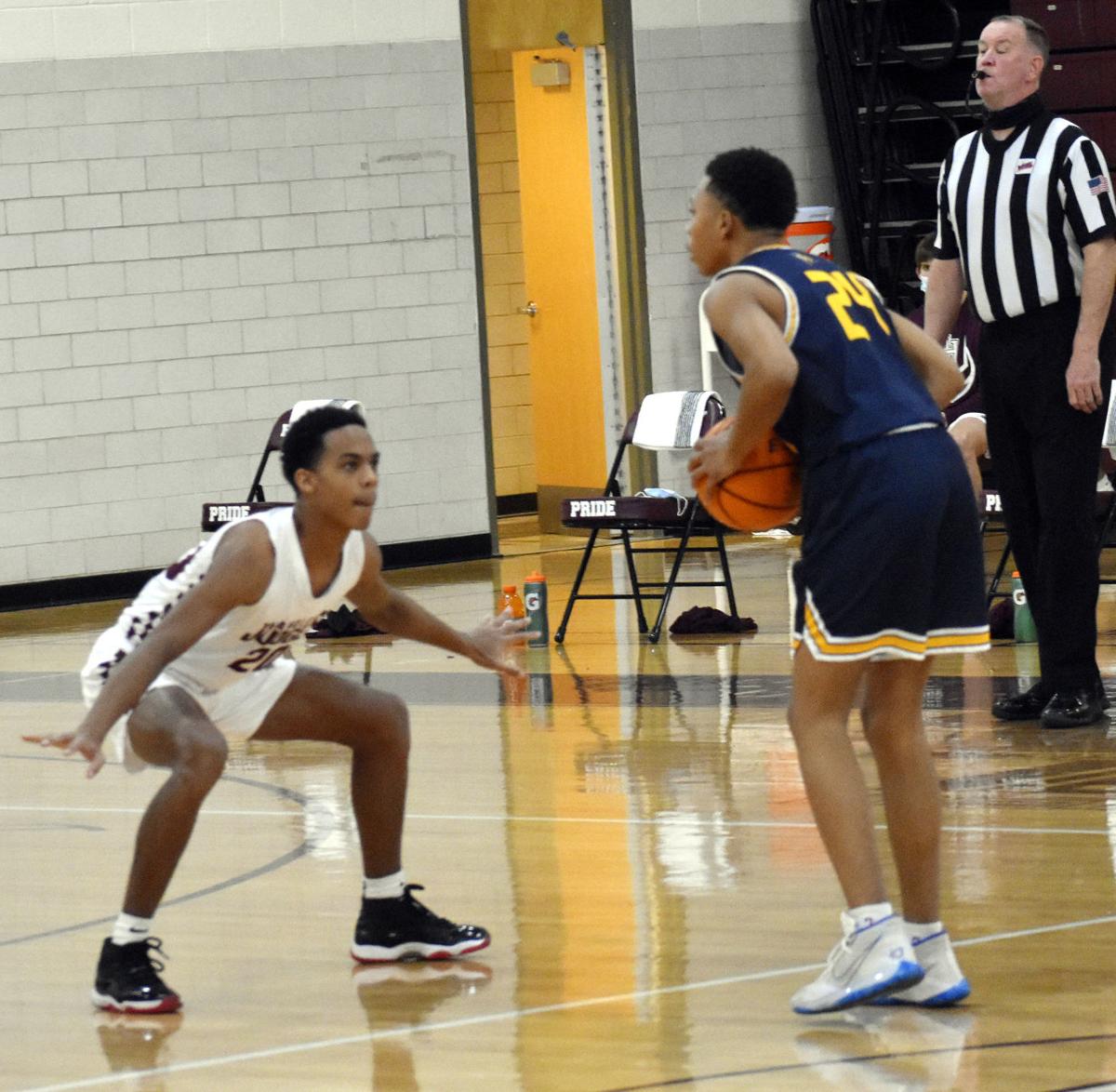 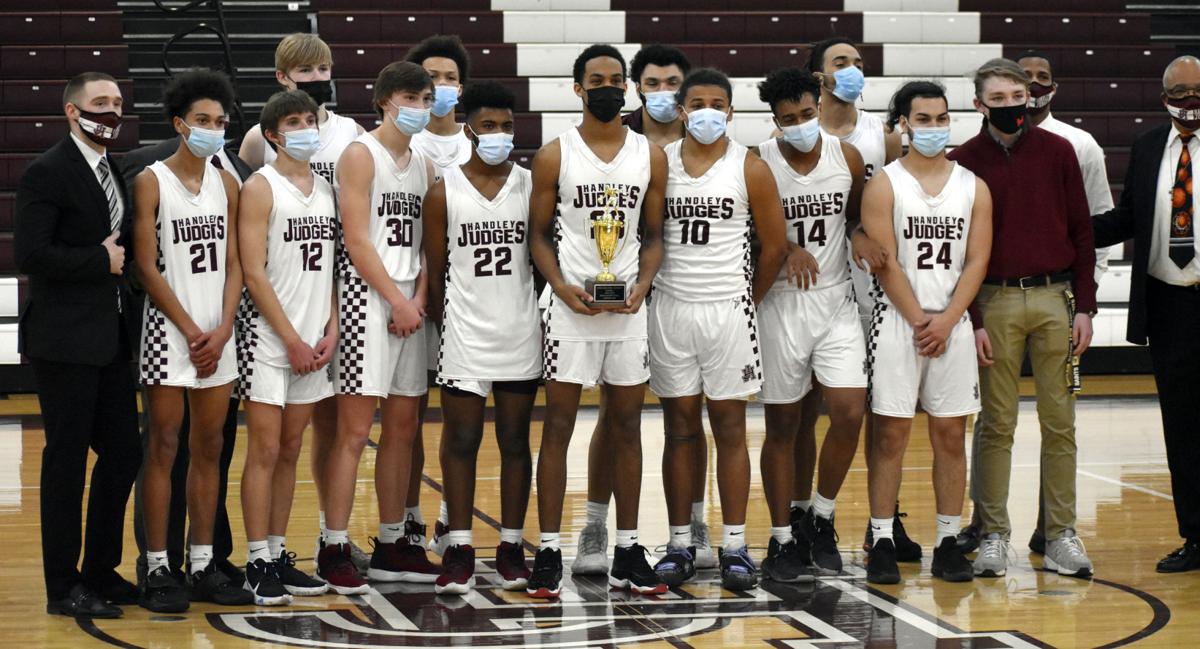 The Handley boys’ basketball team celebrates after winning the Class 4 Northwestern District championship with a 101-60 victory at Maddex-Omps Gymnasium.

The Handley boys’ basketball team celebrates after winning the Class 4 Northwestern District championship with a 101-60 victory at Maddex-Omps Gymnasium.

In Saturday’s Class 4 Northwestern District championship, the Judges started fast and kept on going. Handley raced to a 27-9 lead after one quarter and never let up in pounding second-seeded Culpeper County 101-60 at Maddex-Omps Gymnasium.

Aside from allowing the first basket, Handley never gave the Blue Devils a chance on Saturday. Fueled by two 3-pointers from Ke’Mani Curry, the Judges scored 12 of the next 14 points. And even when Culpeper was able to score, the Judges beat them down the floor for layups.

And when reserve Jacob Duffy nailed a 3-pointer before the buzzer, the Judges had a commanding 18-point lead after the first eight minutes.

Curry, who scored 11 points, said he had an inkling that Saturday’s start was going to be better than the Judges’ previous two games. “It felt really good,” he said about the blazing first quarter. “We’ve been up here since 9 this morning, so we knew that we were going to have a good game since we were all dialed in.”

“The defense is really where we get going,” said forward Ethan Schwantes, who had six of his 10 points in the period. “That helps us get in transition and getting the ball out quick. We just like to play fast.

“We focus in practice on playing fast, even in practice. We’ve been having a lot of good practices lately and we’ve been able to transform that into the game.”

And the Judges maintained that pace from start, which they did not do in recent wins over Liberty and Kettle Run.

“I think it’s something we’ve been really emphasizing all year,” coach Zach Harrell said of starting fast. “When you really look at it, we’ve still only played less than 10 games. I think those things are still kind of piecing themselves together. That is our philosophy. That is our mentality. Make, miss or turnover, get that ball and get it out and go. That’s what those guys did from the jump tonight.”

And maybe the most amazing thing for the Judges is they did it without a lot of points from leading scorer Demitri Gardner. The senior, who entered the contest averaging more than 25 points per game, had just one point in the period. Handley already had a 21-9 lead before Gardner made the second of two free throws.

“It just shows how versatile we can be,” said Schwantes, one of seven different players to score in the quarter. “We all are able to score. We have multiple options. If one or two guys are struggling, we all can come together and get going.”

Gardner got rolling as the Judges blew the game wide open to start the second quarter. Gardner had six points and Chaz Lattimore added five in a 13-0 run to start the period as the Handley lead ballooned to 40-9.

Handley led the Blue Devils 51-23 at the half and could have slowed things down over the final 16 minutes, but the Judges kept pushing.

Leading 59-33, the Judges went on a 19-4 run. The outburst was highlighted by three consecutive steals and subsequent dunks by Gardner (two) and Lattimore.

“We want everyone that comes here to play Handley basketball,” Harrell said. “I told them at halftime, that we’re not going to let this turn into [Culpeper’s] style of play.”

The Judges closed out the period in style as football standout Stephen Daley threw a perfect strike to Duffy, who made a layup at the buzzer and was fouled. Duffy’s 3-point play made the score 83-38 after three quarters.

Handley’s lead grew as high as 47 points (88-41) in the final quarter. Led by point guard Emerson Fusco, the Judges racked up 22 assists for the contest.

“Everybody has put in the work during practice and it showed on the court today,” said Lattimore, who netted 20 points.

Handley had 11 different players score in the contest, led by their four senior starters.

“Us four right here, all scored in double digits tonight,” said Gardner while pointing to Lattimore, Curry and Schwantes. “That’s how you win basketball games.”

Harrell said he especially was pleased to see Curry get off to a fast start and nail three of the Judges’ eight 3-pointers. Harrell said it was the kind of effort that former Handley coach Jason Toton had groomed from Curry for the past two seasons.

“It was symbolic for him tonight to knock them down because that’s what we always envisioned for him — being a leader and hitting open shots and to take the stress off getting the ball into the paint,” Harrell said.

“It’s really a key because it opens up Chaz and [Demitri’s] driving game,” Curry said of making his 3-point attempts. “If they start double-teaming them in the paint and crashing on them, it opens up the threes and when we start shooting threes it opens up the paint.”

Saturday’s win marked the second consecutive blowout of the Blue Devils. The Judges opened the season with a 90-49 victory against Culpeper, also scoring 51 points in the first half.

And like that first game, the big bright spot for the Blue Devils was Nathan Amos. The sophomore, who had 20 points in the first contest, scored a game-high 35 on Saturday.

The romp completed Handley’s dominating run through the district, which is without Frederick County teams Millbrook (a Class 4 semifinalist last season), James Wood and Sherando, who did not participate over COVID-19 concerns. The Judges beat every district foe by at least 14 points.

But they know that domination means nothing on Tuesday.

“This team has high goals,” Harrell said. “They understand those tasks ares still in front of them. With the way it is this year, it’s win or go home at this point. There’s no state quarterfinal. You just can’t make it to the region final and get a bid. They’re definitely still locked in and focused.”

“It’s going to be a heck-of-a game,” he said. “They’re well-coached, well-disciplined. They have a lot of seniors. The do a lot of things well so we have to be ready for them.”