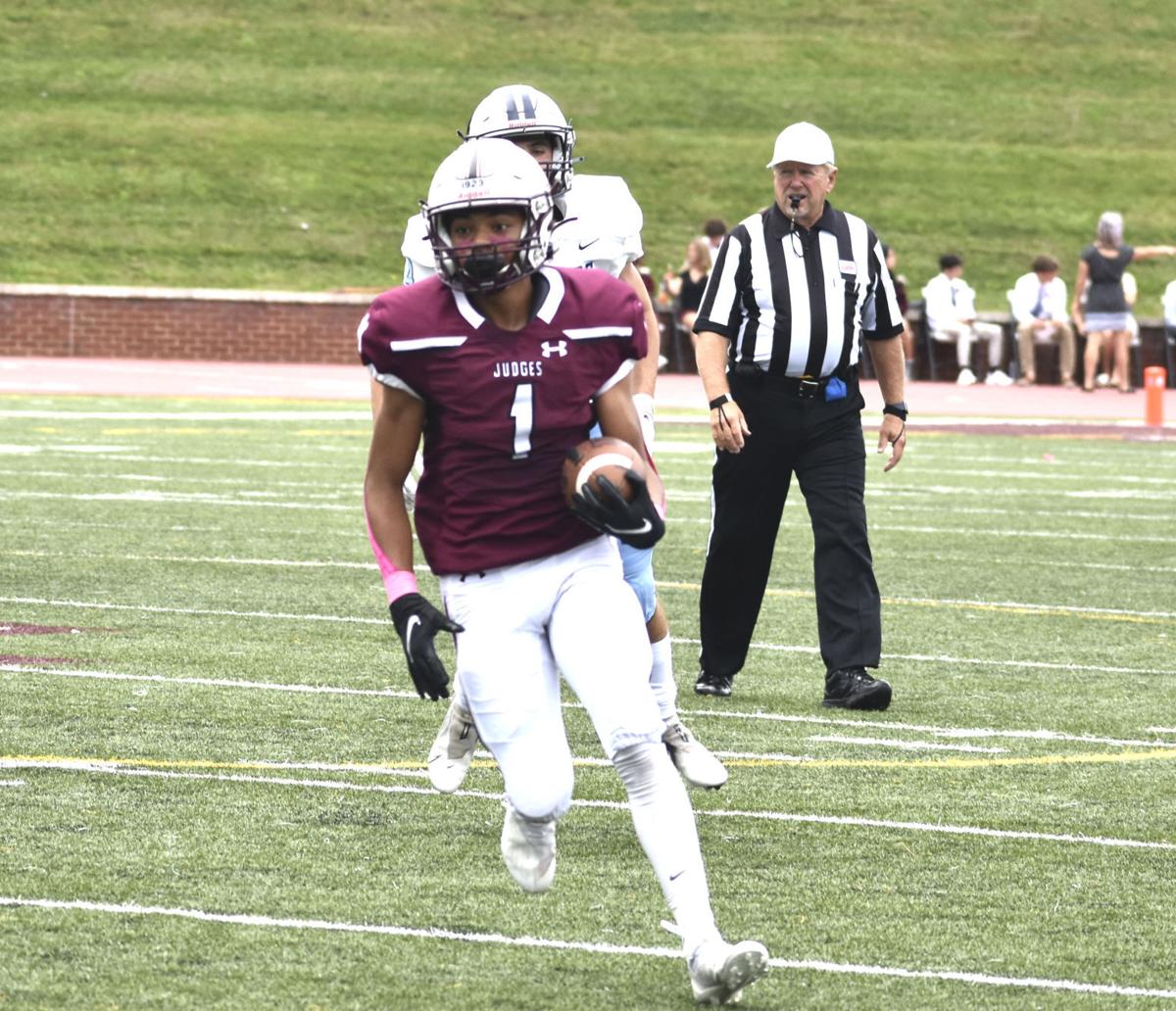 Running back and defensive back Deonte Trammel will look to help Handley get its first win over Sherando since 2010 as the Judges play host to the Warriors today. 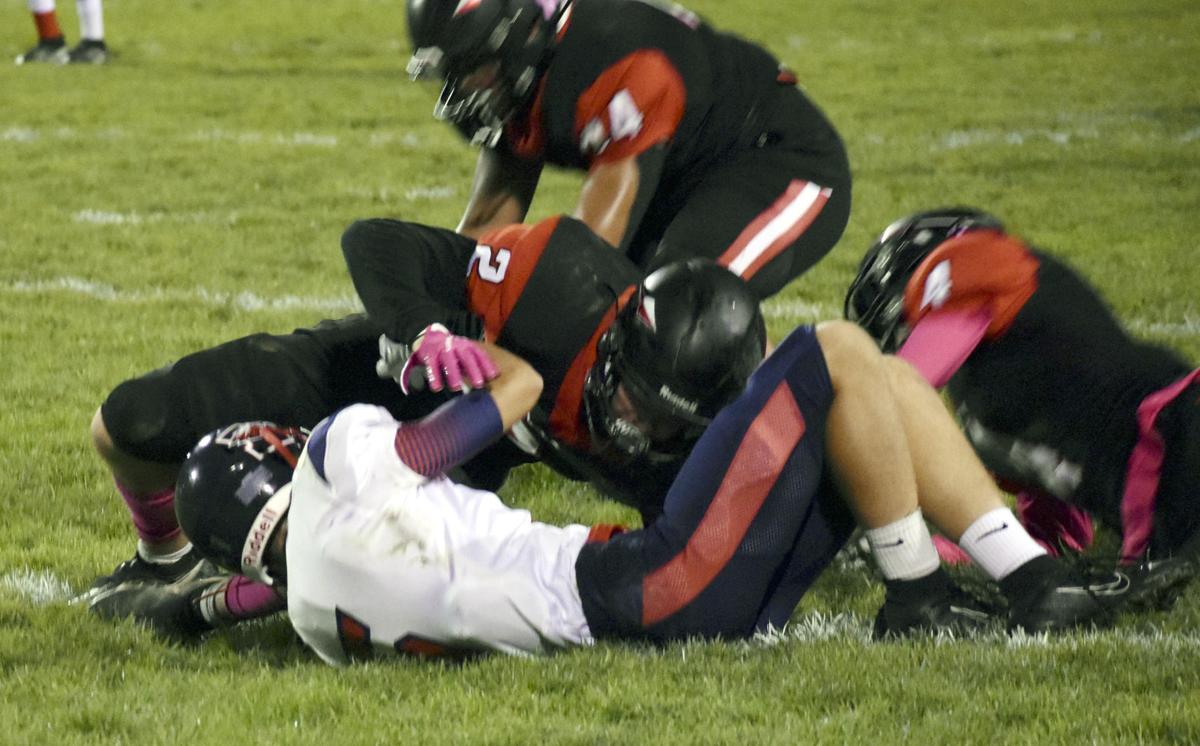 Gavyn Blye (2), Aydan Willis (44) and Nick Luttrell (4) lead a Sherando defense that has allowed just one touchdown in the past two games as the Warriors travel to Handley today.

Running back and defensive back Deonte Trammel will look to help Handley get its first win over Sherando since 2010 as the Judges play host to the Warriors today.

Gavyn Blye (2), Aydan Willis (44) and Nick Luttrell (4) lead a Sherando defense that has allowed just one touchdown in the past two games as the Warriors travel to Handley today.

The last time a Handley football team beat Sherando the current Judges were more concerned with learning how to add and subtract.

It’s been that long since Handley last won in 2010 and the Judges have suffered nine straight losses to the Warriors since.

The two programs will square off again today as Handley hosts Sherando at 1 p.m. at James R. Wilkins Jr., Stadium.

“It’s been awhile,” said Handley coach Dan Jones, an assistant when the Judges last won 24-21 in 2010. “It’s been too long. It’s a huge game for our seniors. They have not been able to beat them. … The fact that they’ve beaten us so many times prior, the past is the past. We have to focus on what we do well and hope to change the outcome.”

First-year Sherando coach Jake Smith has not been around for all of the current win streak, but has seen several Warriors wins as an assistant. He puts no stock in the past, when the present is so important.

“That stuff to me, I don’t really look into those things,” he said. “What we tell our guys and what we’ve always focused on here is one week at a time. Every week is an important week no matter who your opponent is. Whether that opponent is 10-0 or 0-10, it really doesn’t matter. You have to prepare that week like you do for anyone else. … As far as [nine straight] is concerned, I didn’t even know that.”

Both teams are riding winning streaks. Handley has not lost this season and enters the contest 6-0 (2-0 district) after last week’s 36-18 win over Millbrook. After starting 0-3 against some tough competition, Sherando (4-3, 2-1) has won four straight, including a 23-8 triumph against Liberty last week.

It’s a situation that looks eerily similar to the last time the two teams met in 2019 on a Saturday afternoon. The Judges entered 6-0 and an improving Sherando squad was 3-3. The Warriors pulled out that thriller 34-31 in overtime.

“There are some similarities between the two,” Smith said. “I’m excited to go out and compete on Saturday.”

Like that 2019 season, the Judges have a bit to prove today. Handley has rolled through its opponents, but those foes aren’t exactly tearing it up this season. Handley’s opponents were a combined 8-28 entering Friday night’s action.

“You have to prove yourself each week,” Jones said. “Like I said, the past is the past. You play who is on your schedule. All we’re worried about is Sherando. Millbrook was 0-5 last week, but they are a very good team. Sherando is on fire. They’ve won four straight. I don’t know that we have to prove it to ourselves. We have to play who is on our schedule and this week it’s Sherando.”

Sherando has been on a roll after a rough stretch to start against very good teams. The Warriors’ three losses have come against teams which are a combined 18-2.

“They’re getting to know [Smith’s] offense and they’re executing it well,” Jones said of the Warriors. “Their defense is sound. Their kids know how to win. They’re traditionally a winning program. They expect to win and that’s scary because half the battle is just the belief in your own abilities and they have that. They have that tradition.

“They’re a rival and they have our number right now. Until we can beat them and change that, right now I say they’re the favorite because of that. They’ve shown that they can beat us and we haven’t shown them that we can win that game, yet.”

Sherando has won its last two starts with freshman Micah Carlson at quarterback in place of senior Dylan Rodeffer, who was on the sidelines in street clothes for those contests. Carlson, a threat with his arm and legs, has strong talent with Cam Sullivan (686 yards, 6 TDs) in the backfield and AJ Santiago (28 catches, 6 TDs) and Gavyn Blye (16 catches, 2 TDs) as receiving targets.

“They have speed and they execute their offense well which is scary because they can take advantage of you,” Jones said. “It doesn’t matter how you line up, they seem to find the open receiver. They know where the want to go to right away. Both quarterbacks get the ball out of their hands quickly. They don’t get sacked very often. … Their athletes are scary when they get the ball in space. They can hurt you.”

Smith says his offense will face a challenge from a Handley defense, which is led by Stephen Daley, who has eight sacks and five forced fumbles. The Judges are allowing just 185.7 total yards per game.

“They’re aggressive on defense,” Smith said. “They have some good size on the defensive line and Daley is good off the edge. And, their DBs match up pretty well in coverage.”

On offense, the Judges are led by Daley, who has rushed for 927 yards and 15 touchdowns on just 66 carries. Emerson Fusco is dangerous as a runner and return man. Junior quarterback Davion Butler has yet to throw an interception and five of his seven TD passes have gone to Jacob Duffy.

“Obviously, Stephen Daley is somebody that you have to know where he is at all times,” Smith said. “He’s a physical runner. He’s a good athlete. He’s a track athlete which at his size makes him difficult to defend. Their quarterback does a good job as well and they have a couple of dangerous guys on the perimeter. No. 2 Emerson Fusco, he’s a pretty explosive player himself.

“They are big up front,” Smith added. “This is probably the biggest Handley front that I’ve seen since I’ve been in the area. They have a lot of good pieces over there on that side of the ball.”

Sherando will counter with a defense that has allowed just one touchdown over the past two games. Led by hard-hitting linebacker Aydan Willis (by far the area’s leading tackler with 93), the Warriors have stiffened after giving up 500 yards per game over the first four.

Jones has been impressed by the Warriors’ improving defensive line.

“The guys in front of [Willis] do such a great job to help him make the tackles,” Jones said. “They’re sound everywhere. There secondary covers well and does what they are supposed to which makes the quarterback hold the ball a little longer. Their front does a great job and allows the linebackers to make tackles and they don’t miss too many tackles. They’re a quality team.”

For Sherando to add to its winning streak against Handley, Smith says the Warriors have several things to check off.

“The key defensively is limited No. 6,” he said. “If we can limit Daley and keep him in check, that will be a huge key for us on that side of the football. Offensively, we have to avoid turnovers. Taking care of the football is a huge thing for us. And in the third phase of the game, we have to play really well on special teams. They have very good special teams units and their return units are very good, so we’ll have to play very well there, too.”

Jones said to end the skid the Judges must perform to their potential.

“We need to execute,” he said. “If we can execute offensively the way we have in the past and get a little bit better, I think we can take advantage of a couple of things. On defense, we have to play gap and execute our scheme as well as we can. As long as we do that, we have a chance.”