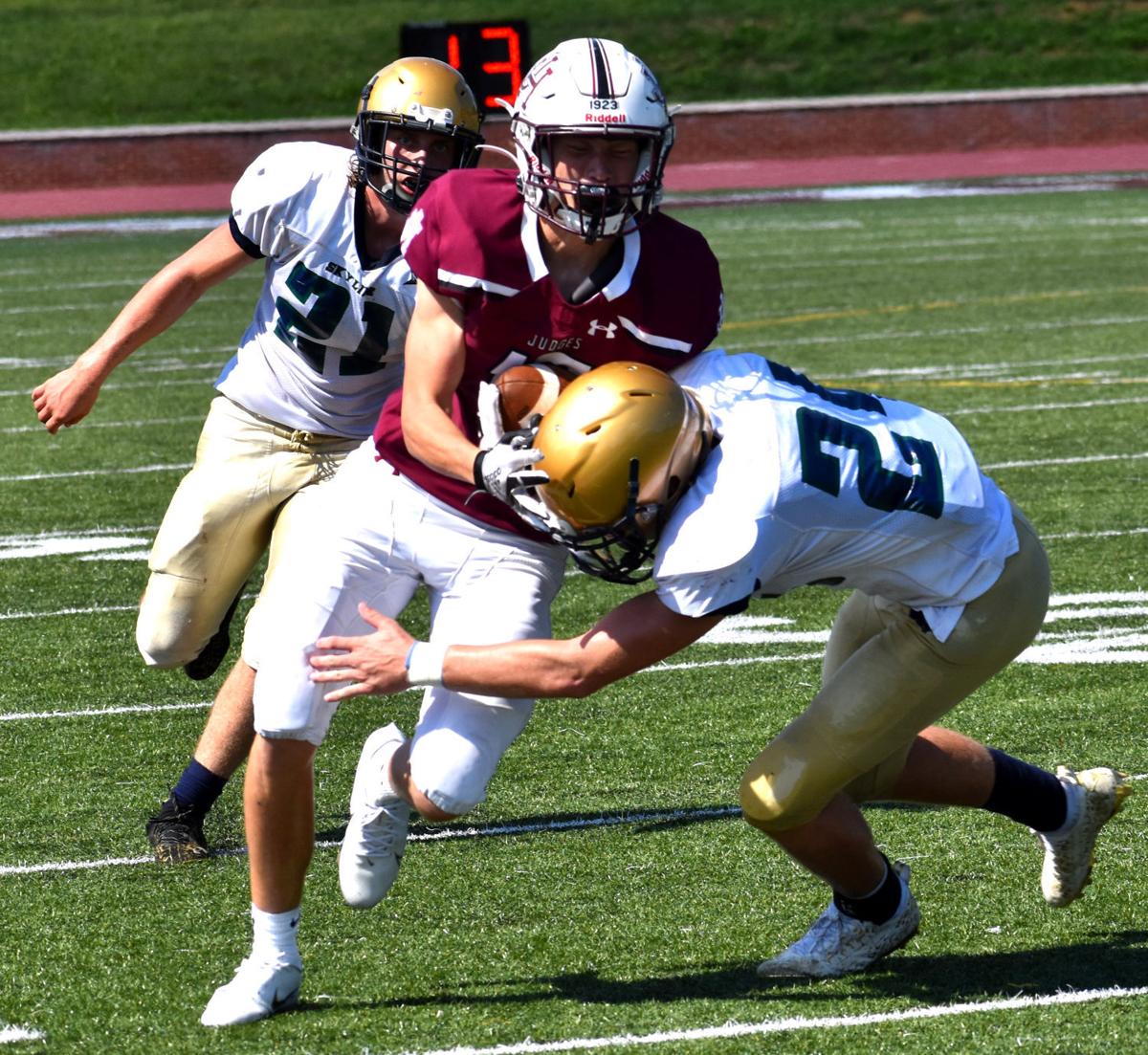 Handley's Jacob Duffy crashes into Skyline's Ethan Caperton after making a reception during Saturday's game. Duffy had six catches for 139 yards and a touchdown during the Judges' 56-13 win. 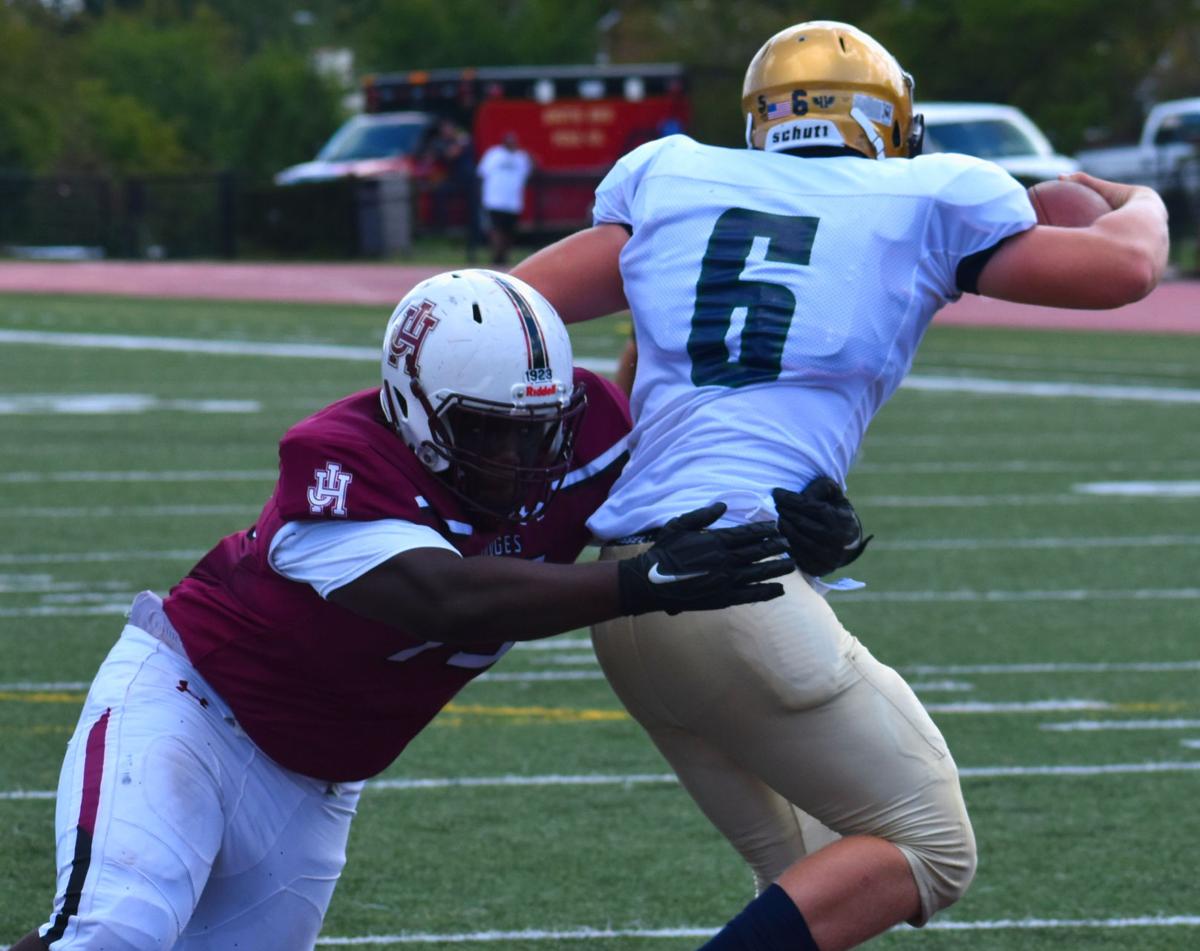 Handley’s Rodd’ney Davenport takes down Skyline’s Dustin Gue for a safety in the first quarter on Saturday. Davenport also forced a pair of fumbles during the Judges’ 56-13 victory. 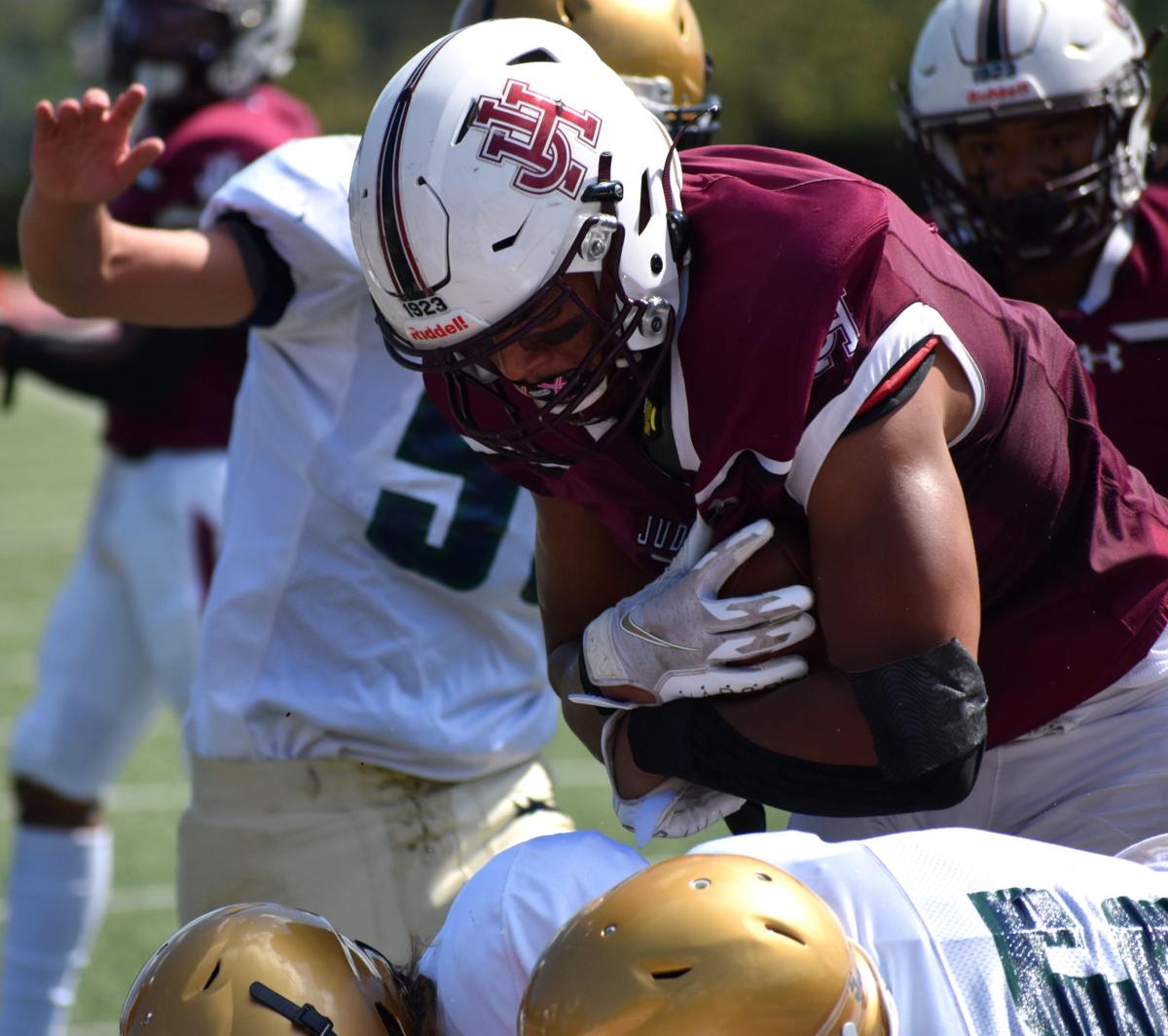 Stephen Daley runs over two Skyline players to score on a 3-yard run in the first quarter on Saturday. Daley scored four touchdowns' during the Judges' 56-13 win on Saturday.

Handley's Jacob Duffy crashes into Skyline's Ethan Caperton after making a reception during Saturday's game. Duffy had six catches for 139 yards and a touchdown during the Judges' 56-13 win.

Handley’s Rodd’ney Davenport takes down Skyline’s Dustin Gue for a safety in the first quarter on Saturday. Davenport also forced a pair of fumbles during the Judges’ 56-13 victory.

Stephen Daley runs over two Skyline players to score on a 3-yard run in the first quarter on Saturday. Daley scored four touchdowns' during the Judges' 56-13 win on Saturday.

On Saturday against Skyline, Rodd’ney Davenport and Nasir Nix proved that rushing the opposite direction isn’t a guarantee of success, either. Davenport forced two fumbles, one of which Daley returned for a score, had a safety and a sack as he and Nix fueled a 56-13 victory against the Hawks.

Daley rushed for three touchdowns, while Emerson Fusco had a 26-yard run and an 85-yard kickoff return for scores for the Judges (4-0). Quarterback Davion Butler threw for 195 yards, including a scoring strike to Jacob Duffy, on a steamy afternoon at James R. Wilkins Jr. Stadium.

After Daley forced two fumbles and had three sacks in the Judges’ first two games, the next two opponents (Spotswood and Skyline) decided to test the other Handley linemen.

“He’s a next-level guy,” Skyline coach Heath Gilbert said of Daley, who is headed to Kent State. “Running our head into a wall wasn’t part of our game plan. We wanted to try to move our offense away from him.”

Davenport said he and his teammates are taking that scenario as a challenge.

“If they run away from Stephen, they know he’s good,” the 6-foot, 285-pound junior said. “It’s an insult to us because you should be running away from all of us.”

“The other side of the defense has picked it up,” he said. “I think they’re realizing that a lot of these games that they are going to have to be the dudes on defense. Just like I would, I would run away from Stephen. I think they all stepped up and realized that it’s going to keep coming at them.”

Davenport set the stage early in the contest. The Judges fumbled from the Skyline 2 on their first possession and Judd Schuman recovered at the 4.

After one play lost two yards, Davenport shucked a block and grabbed Skyline’s Dustin Gue in the end zone for a safety.

Was Davenport thinking about getting the first safety of his Handley career?

The fumble for the Judges was the first of several miscues against the scrappy Hawks, who were playing their first game since Week 1 after having been quarantined for two weeks for COVID-19. Handley lost two fumbles, had a long TD run called back by a penalty and gave up a season-high 204 yards on the ground, including Aidan Vaught’s 77-yard TD run.

“… I think we may have too much confidence right now. I think we’re taking the right steps. We didn’t execute and do the fundamentals today.”

The Judges do have several playmakers on offense and used them. Daley’s 50-yard catch and run with a screen pass set up his own three-yard TD run to make it 9-0. After Nix dropped Gue for a one-yard loss on a fourth-and-1 from the Skyline 35, Daley scored on a 34-yard run out of the Wildcat to make it 15-0 with 2:36 left in the first quarter.

Skyline (0-2) didn’t fold, needing just two plays to bring the contest back to within a score. On second-and-7 from the Hawks’ 23, Vaught took a handoff on a counter play to the left, found a big hole and then zig-zagged right then left for a 77-yard score to make it 15-7.

It would stay that score for most of the second quarter, until a late surge by Handley. Taking over at the Skyline 33 after a punt, Butler lofted a jump ball to Duffy who wrestled it away from a defensive back at the 2. Izayah Arnoux scored from there to make it 22-7.

Taking over at the 26 after a good punt return from Fusco, Handley scored in three plays, the last another three-yard TD run by Daley to make it 29-7 at the half.

Skyline took the second half kickoff and drove 59 yards to the Judges’ 21 where Nix brought down quarterback Blake Appleton for a yard loss on fourth-and-4.

Handley then embarked on a long drive. On fourth-and-18 from the Hawks’ 29, Butler scrambled out of the pocket and found Duffy open in the end zone.

Butler finished the game 9 of 11, with Duffy having six catches for 139 yards.

“I feel like we’re definitely getting a lot better in the passing game,” Jones said. “Davion may have underthrown a ball or two, but I think his choices and who he threw it to were the correct decisions.”

Fusco scored from 26 yards out to start the fourth quarter and on Skyline’s next possession Davenport made his presence felt again. He forced a fumble that Daley scooped up at the Skyline 40 and raced down the sidelines for a touchdown that made it 50-7.

“The whole game they had never really ran to my side much,” Daley said. “There was one play where they we like, ‘Double Daley’ and I got like triple-teamed. With that kind of defense, it’s kind of hard for me to do anything. Then Rod caused the fumble and I got it.”

“I didn’t even know it was a fumble,” Davenport said. “I was at nose [tackle] and I beat my block and I did everything right. I hit him and I guess instinctively I chopped down and the ball must of come out. Stephen, who didn’t get to have a good game, knowing what he did that was cool. I got to provide for my teammate like he provides for us time-and-time again.”

That was it for the Handley starters on defense and Appleton took advantage by firing a 61-yard TD strike to Ethan Caperton.

On the ensuing kickoff, Fusco broke loose for 85 yards and the game’s final TD.

Fusco led the Judges with 83 yards on seven carries, while Daley added 64 on seven carries. Daley also completed a halfback pass to Duffy for 34 yards on the first play of the game. Arnoux also played well on defense, flashing up the middle on blitzes to nail a runner in the backfield.

Next up for the Judges is the Class 4 Northwestern District opener at Fauquier on Friday. Davenport says the Judges should be ready.

“We feel pretty prepared, but there’s still some things we need to work on,” he said. “The little things are crucial. If you don’t do the little things right, they are going to score off of that.”