You are the owner of this article.
Edit Article Add New Article
You have permission to edit this article.
Edit
Login
Home
News
Opinions
Sports
Obituaries
Life
Advertise With Us
Classifieds
Jobs
Events
Digital Replica
1 of 4 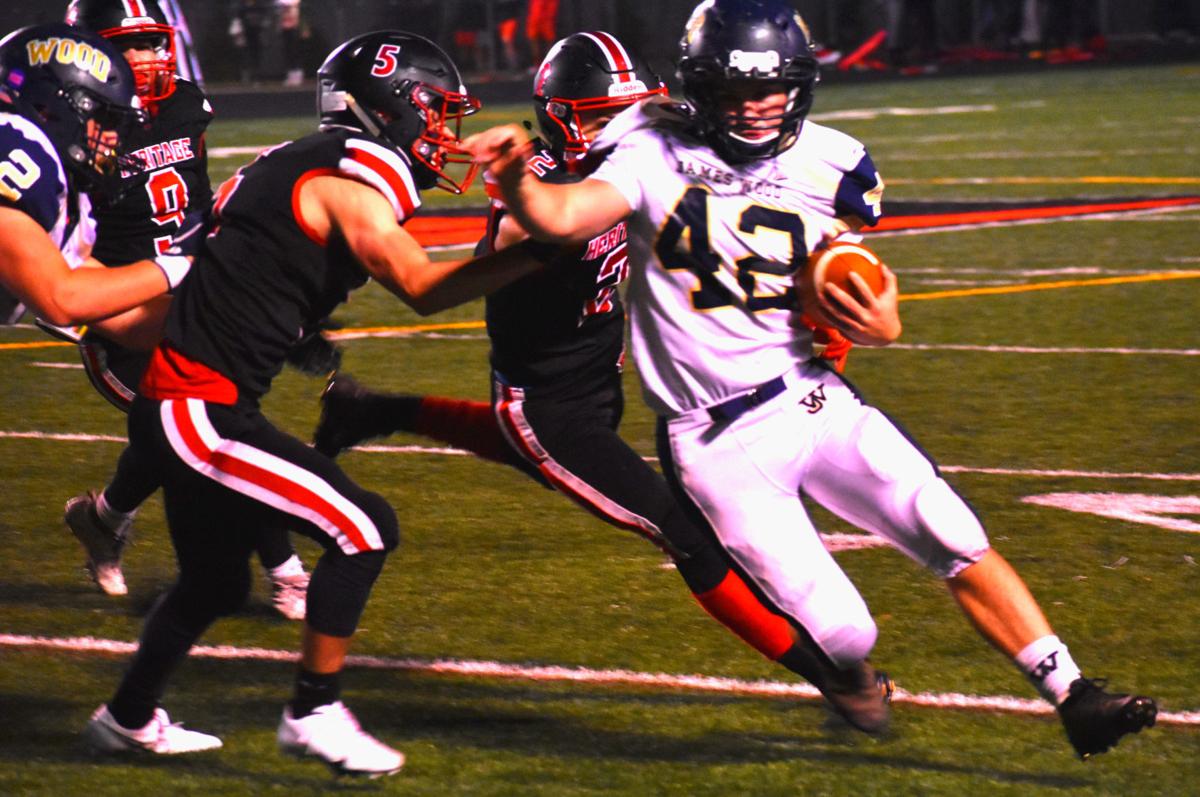 James Wood running back Wes Brondos pulls away from Heritage tacklers Jonathan Shea and Kyle Ault during the second quarter of Friday’s Region 4C quarterfinal playoff game. Brondos had a 69-yard touchdown reception for the Colonels’ lone score in a 32-6 loss to the Pride. 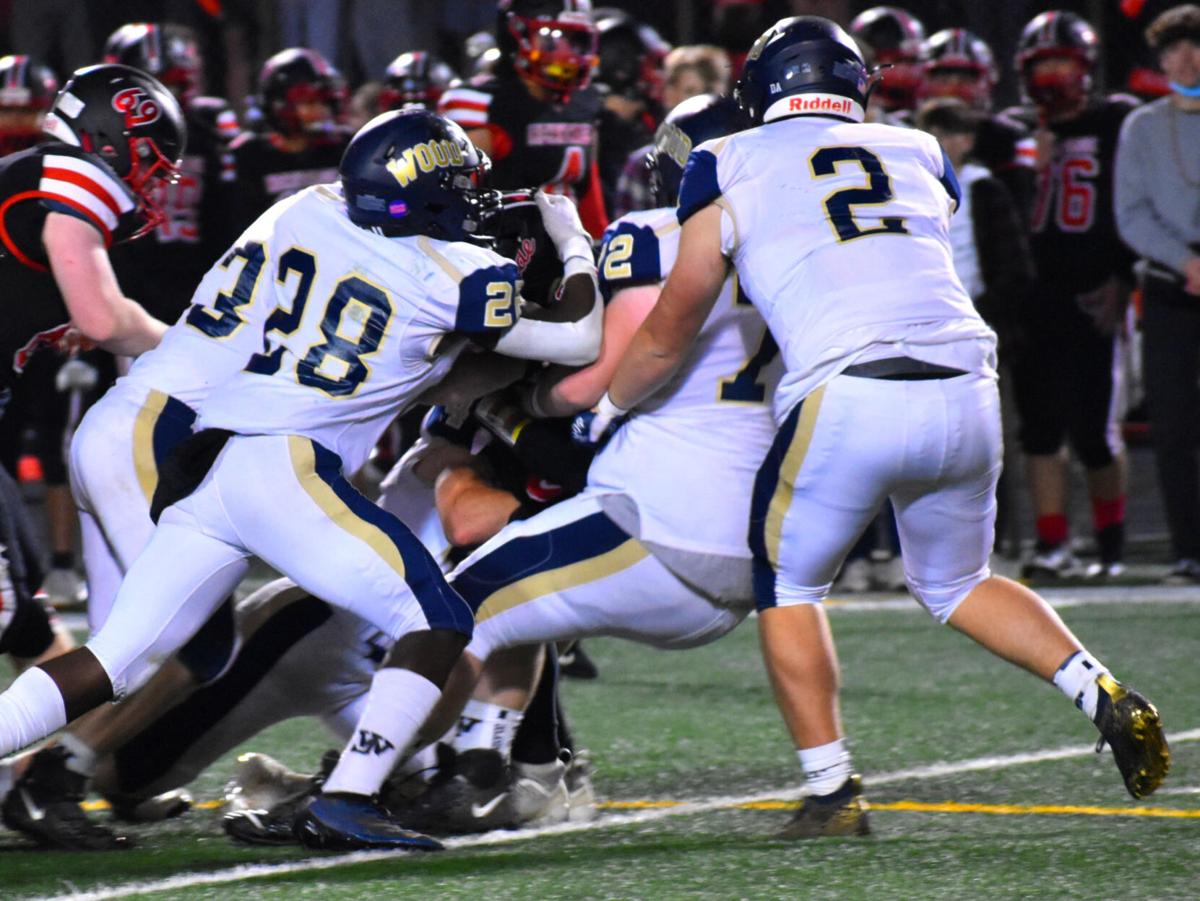 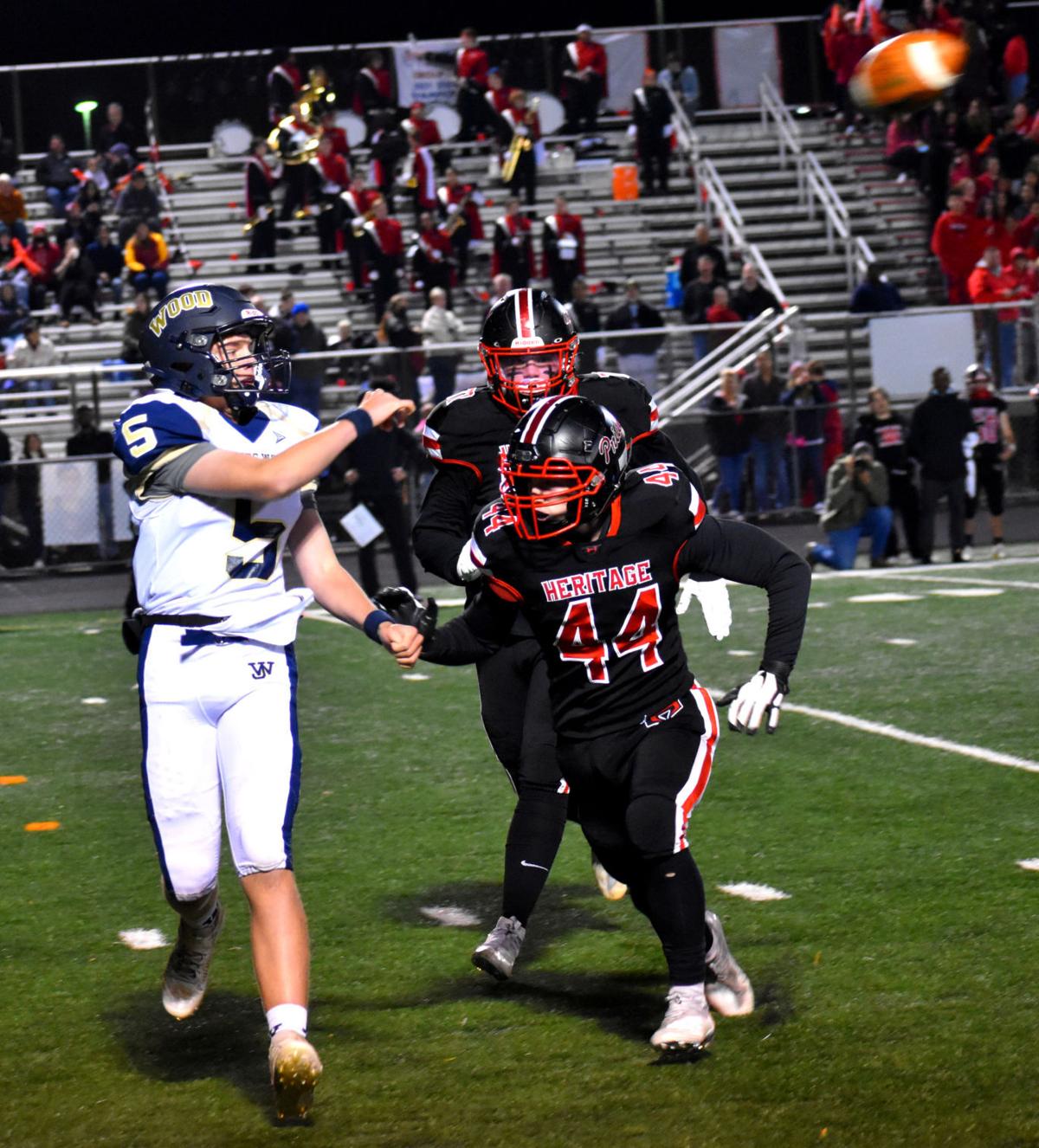 James Wood quarterback Jared Neal gets rid of the ball as he is pressured by Heritage's Jake Hughes (44) and Alec Grijalva in the first quarter. 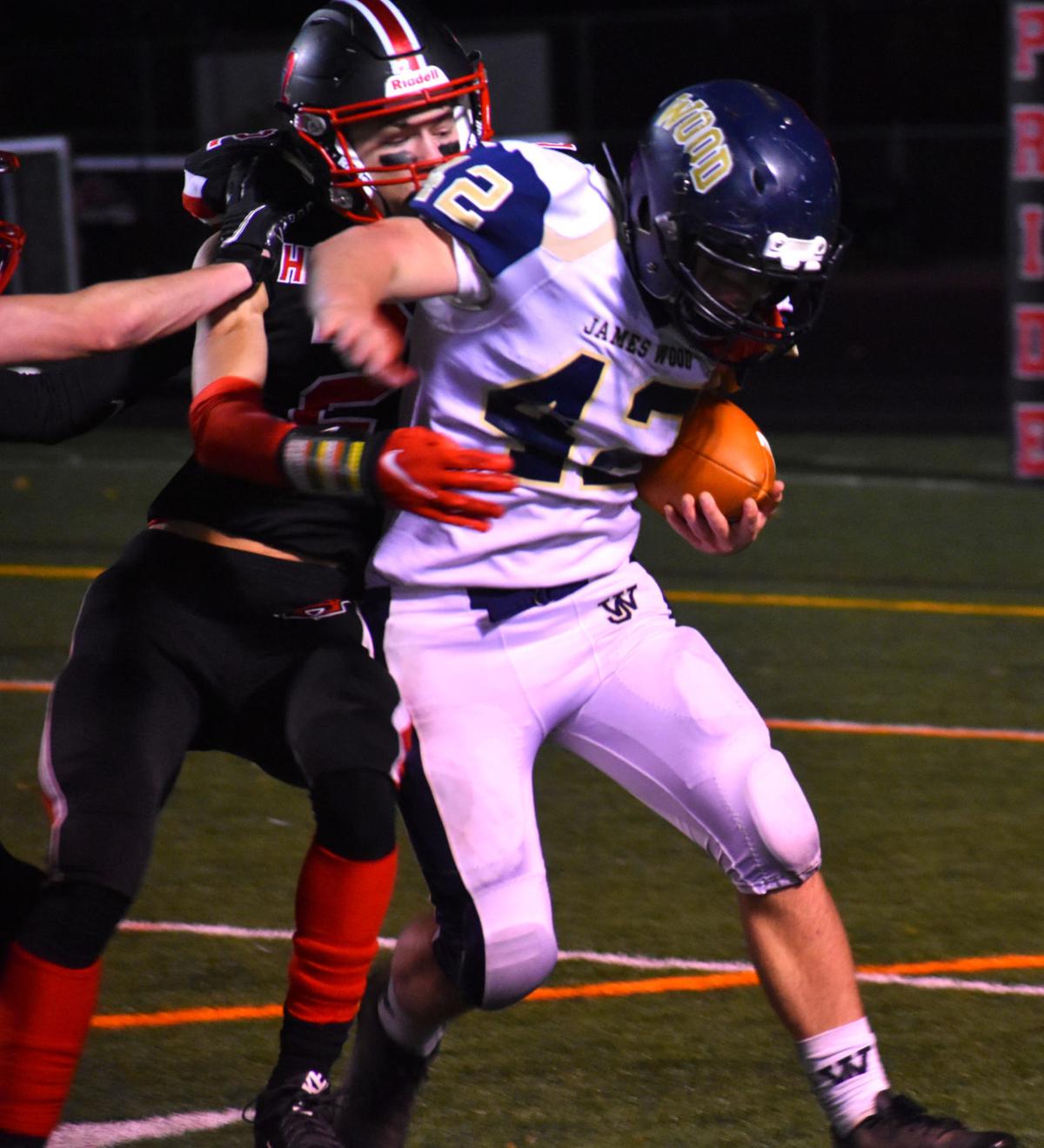 Heritage's Kyle Ault brings down James Wood running back Wes Brondos for a loss in the third quarter. Ault had three interceptions in the Pride's 32-6 win over the Colonels.

James Wood running back Wes Brondos pulls away from Heritage tacklers Jonathan Shea and Kyle Ault during the second quarter of Friday’s Region 4C quarterfinal playoff game. Brondos had a 69-yard touchdown reception for the Colonels’ lone score in a 32-6 loss to the Pride.

James Wood quarterback Jared Neal gets rid of the ball as he is pressured by Heritage's Jake Hughes (44) and Alec Grijalva in the first quarter.

Heritage's Kyle Ault brings down James Wood running back Wes Brondos for a loss in the third quarter. Ault had three interceptions in the Pride's 32-6 win over the Colonels.

It works that way for football coaches, too.

On Friday, James Wood coach Ryan Morgan watched as some of his biggest threats came off the battlefield and the result was a 32-6 loss in the Colonels’ most important game of the season.

Heritage quarterback Braden Smith threw four touchdown passes, three to Omari Cornwall, and Kyle Ault picked off three passes and caught a spectacular TD pass as the Pride pulled away from the Colonels in the Region 4C quarterfinals. Heritage (9-2) will host Tuscarora (9-2), a 48-12 winner over Kettle Run, in the semifinals, while James Wood finished its season 7-4.

Colonels fans, many in attendance on Friday, will wonder what might have been in the contest.

After Heritage had taken a 6-0 lead on a spectacular catch by Ault in the back left corner of the end zone, the Pride did something many teams haven’t done — kick the ball to James Wood’s Jaden Ashby.

The Pride had kicked away from Ashby, who has scored on two of his five kickoff returns this season, on the game’s opening kickoff, but they blasted it deep after the Colonels moved up.

Ashby retreated to catch the ball and returned it to the 33, but he did not get up after suffering an apparent right knee injury.

“We had big plans for him tonight,” Morgan said of Ashby, who had scored 25 touchdowns in the regular season. “We were planning to get him more touches tonight, but on his first touch he went down. It makes things tough when you game plan for your most explosive player the load bearer, but that happens to teams all of the time, so we need to be able to adjust.”

Ashby sat out the rest of the first half, but tried to play to open the second half. On the second play, the senior went down again after trying to make a tackle on defense.

“He wanted to go,” Morgan said. “When we were on the sideline at halftime, he said he wanted to go. We talked to the trainers and the doctor and they gave him the OK if he felt like he could make it. He got out there for a couple of plays on defense and he just couldn’t do it.”

Ault said he was disappointed not to get a chance to play against Ashby. “We prepped for him all week,” Ault said. “That was really unfortunate. I was excited to compete with him. That was a tough break for them.”

Ashby’s injury was the only one that hurt the Colonels. Center and defensive lineman Ronan Solosky went down in the first half and spent the second half wearing a sling. Several other Colonels were sidelined at times during the contest.

Still, the Colonels were hanging around. They trailed just 12-0 at the half. Smith found Cornwall down the seam for an 85-yard catch and run for the Pride’s second score, but Caleb Keefer’s sack helped halt a late first-half march by the Pride. A holding penalty cost the Colonels a 33-yard TD run by Wes Brondos in the second quarter.

The Pride came out of the locker room and went 80 yards in eight plays. Sean Robinson rushed five times for 33 yards and Smith was 3-for-3 with all the completions going to Cornwall, including a 35-yard TD down the seam to make it 19-0.

But the Colonels found some life in an unexpected fashion. After holding the Pride on fourth down at the James Wood 31, quarterback Jared Neal threw a short pas to Brondos, who had caught just one ball all season. Moving left after the catch, Brondos cut behind a nice block from Zach Rose and bolted down the left sidelines. He broke a couple of tackles as he neared the end zone to complete a scintillating 69-yard TD that made it 19-6.

“I’ve been known not to have the best hands,” an emotional Brondos said. “Some things played out in the wrong way, but also in the right way and I got put in. It was an amazing moment to finish my senior year with a play like that. It’s going to be something that I look back on and be so proud of.”

The Colonels had one possession with a chance to get closer, but went three-and-out. Taking over to start the fourth quarter, the Pride drove 62 yards in six plays to put the game away. Robinson pounded away for 22 yards on the first five plays and then Cornwall did the rest. On third-and-2, Cornwall took a short pass from Smith designed to get a first down, broke a tackle and outran the Colonels’ secondary down the left sideline for the score to make it 26-6 with 9:07 left.

“We were looking to pound them on the run and they didn’t have a lot of safeties so they were playing man [coverage] across the board,” Ault said. “I don’t think anyone in the county can man up with No. 1 (Cornwall). He had a day for himself.”

Robinson, who finished with 181 yards on 36 carries, would later cap the scoring with a one-yard run. That was set up by a 37-yard pass to Junior Darko from Smith, who finished 16 of 21 for 230 yards.

The Colonels, usually a strong rushing team, netted just 30 yards on the ground in 19 carries.

“Their defensive line is big and strong,” Morgan said of Heritage. “They have got a couple of 300-pounders in there and they are pretty aggressive. We liked their inside linebackers No. 9 (Ethan Bethke) and No. 10 (John Wingfield). We knew it was going to be tough sledding in there. We thought we might be able to get some things on the edges with Jaden, Ryan King and Wes, but obviously that didn’t work out the way we wanted it to.”

The Colonels lose 12 seniors from the squad which secured the program’s first regional playoff berth since 2014.

“We’re losing a ton of leadership,” Morgan said. “We have some young guys who are going to step up in the future, but it’s just a great group of guys who have built up this program. We had our most wins in like a dozen years. They have done an awesome job.”

Brondos, who was part of two successful JV teams before joining the varsity in the spring, says he is proud of his teammates and coaches.

“It hurts,” he said of Friday’s loss. “I really wanted to go far in the playoffs. Who doesn’t want to win states? It so amazing to have this year and make all of the friends I have. I hope I keep up with them the rest of my life. I love these guys.”