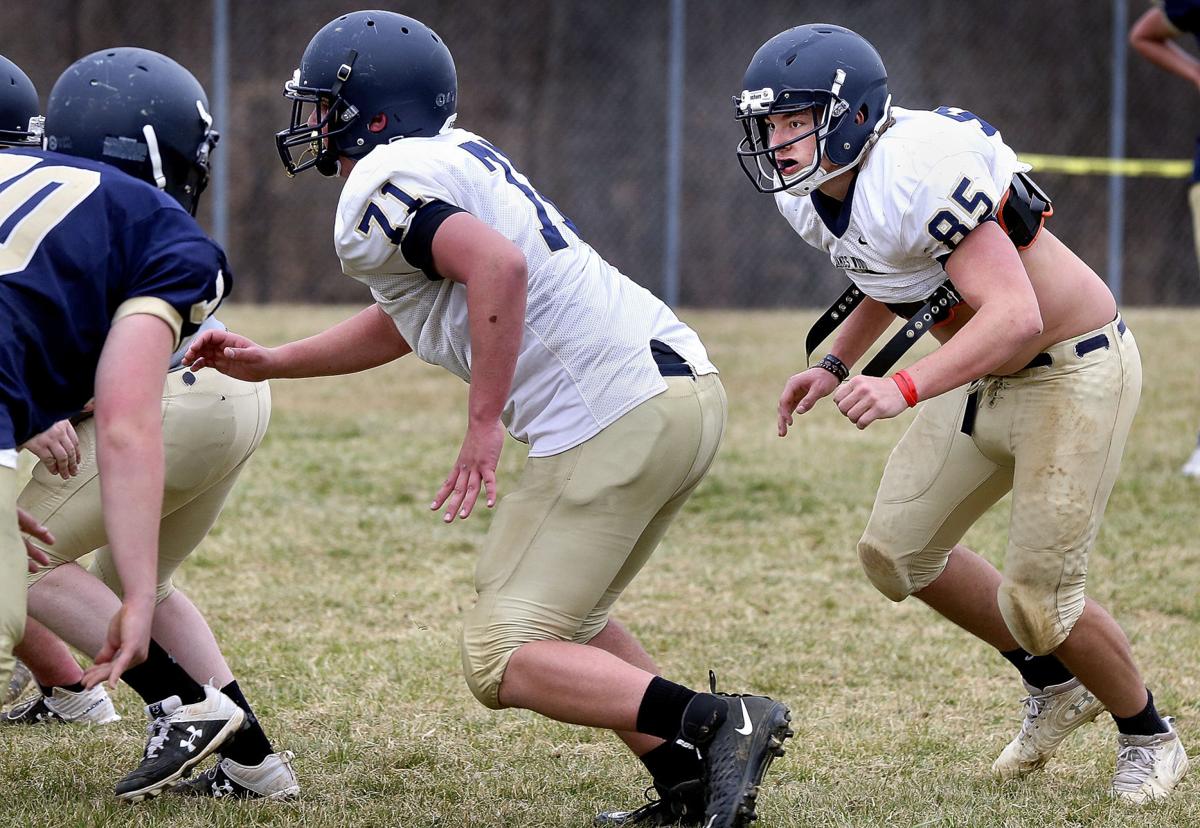 James Wood defensive end/tight end Clayton Jones (right) was third in the area with eight sacks last season, despite missing multiple games with an injury. The Colonels open their season on Friday at Goochland. 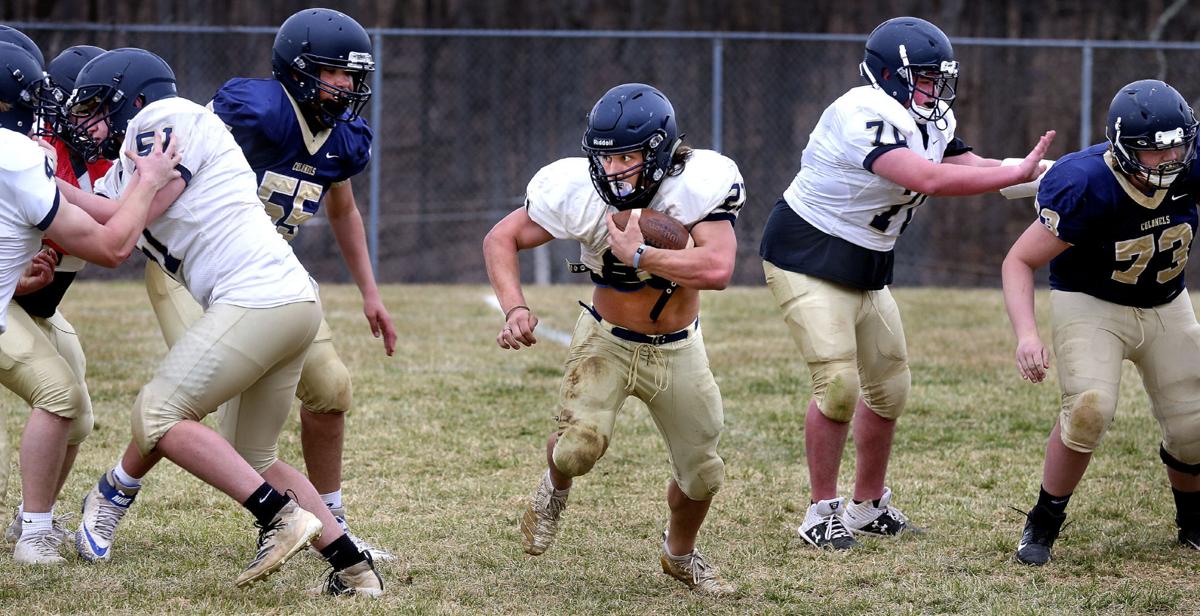 James Wood's Joey Vitola will start at running back this season and also will look to lead the Colonels from his outside linebacker spot on defense.

James Wood defensive end/tight end Clayton Jones (right) was third in the area with eight sacks last season, despite missing multiple games with an injury. The Colonels open their season on Friday at Goochland.

James Wood's Joey Vitola will start at running back this season and also will look to lead the Colonels from his outside linebacker spot on defense.

The Colonels will open their season on Friday at Goochland, which is 3-0 in playing a mixture of VHSL opponents.

“We’ve watched Goochland play three games now,” Morgan said. “I said to the other coaches, ‘I know more about Goochland than I know about James Wood because we haven’t had a fully padded practice yet.’”

Even without the COVID-19 delays to the Colonels’ four-game season, Morgan would be looking for some answers about how his squad would fare. The Colonels lost more than 20 seniors from a team that went 6-4 and just missed out on securing a regional playoff berth. The winning season was the school’s first since 2010.

Now with the delays in sports seasons in Frederick County, Morgan had to wait for several of his top athletes who were playing basketball and wrestling to report fully for practice. The Colonels’ basketball season finished Monday.

The Colonels will be putting on the fullcourt press to get ready for the opener because they have a roster that in no way approaches last season’s experience.

“It’s a little bit of a transition year,” Morgan admitted. “We lost more than 20 seniors and we only have about 10 seniors on the roster right now. We’re a pretty young team. I imagine a lot of teams are going to be pretty young. We’ve lost a few players since COVID hit. We’ve had a few players decide they are going to move on, get jobs and not play football this spring.”

The good news is that Morgan likes what he sees out on the practice field.

There are certainly some new names that will be in the mix at skill positions on offense because of the Colonels’ graduation losses. Sam Adkins rushed for 1,115 yards and 15 touchdowns, Carson Hoberg threw for 1,996 yards and 16 TDs and speedster William Crowder was a threat in the running and passing game.

James Wood does return receiver Jaden Ashby (Jr., 6-0, 185), who was third in the area last season with 48 catches for 777 yards and 10 scores. Ashby also was a threat in the return game and will return punts and kickoffs again.

Throwing the ball will be a newcomer. Jacob Manuel (So., 5-11, 165) led the JV squad last season and he comes from a football family with brothers Nick and Dylan having already gone through the program.

“He’s got a good mind,” Morgan said of Manuel. “He’s got some older brothers who have experience and he’s played with them and competed with them in the past.”

Opening up the holes for them will be mostly new faces.

Morgan is intrigued with what Hunter Franks (Jr., 6-4, 250) can do at tackle. Franks, who was injured playing basketball as a freshman, had not recovered fully by the fall of 2019.

“We’re looking forward to seeing what he can do,” Morgan said. “He’s a big boy.”

Jones and Vitola bring experience and production to the Colonels’ defense.

Jones, despite missing time with an injury, was third in the area with eight sacks last season and had 44 tackles from his defensive end spot.

“Clayton is long, lanky and athletic,” Morgan said. “He finds a way to make plays. He steps it up in games where he has that extra gear to get to the quarterback or chase down a running back from behind. With that size and his athleticism, he’s a tough matchup for a lot of people.”

Vitola, also a wrestling standout, is starting his third season as an outside linebacker. He is the team’s top returning tackler with 62.

“Joey really understands what we’re trying to do,” Morgan said. “Joey is also a wrestler. He does a good job out there taking out people’s legs and playing low with leverage. He helps the other kids kind of grow and learn. He’s doing a good job there. He’s a tough kid and he’s also one of our stronger kids. His thighs are like tree trunks.”

Joining Jones on the line will be Waters at the other end. Franks, McKee and Pingley will see time at the two tackle slots.

Cisse and Brondos are scrapping at the other outside linebacker position. Blake Hounsell (Jr., 5-11, 215) and Dueweke are looking to fill the void left by Jackson “Hammer” Turner, who led the Colonels last season with 99 tackles at inside linebacker.

It’s a team of new faces that Morgan genuinely is looking forward to seeing what it does on game night.

“… We’re kind of waiting to see who emerges. Normally, we have a scrimmage or two to figure that out. They’re going to be kind of thrown into the fire the first game against Goochland. We’ll kind of see who shows up.”

And while winning is important over this small sample, Morgan said it also is key to keep the big picture in mind.

“That’s the one big thing, when the kids are done this spring they are going to come back and play football in four more months,” he said. “You kind of want to strike a balance between doing all that you can to win the games, but also preparing your team for the fall. This is our normal spring practice time.

“Since we only have about 10 seniors, we have a lot of young guys competing for playing time who we expect back in the fall. Whatever experience they get this spring hopefully will carry over and hopefully we can take what we do this spring, take the film and use it over the summer as a teaching tool to get the kids ready for the fall.”