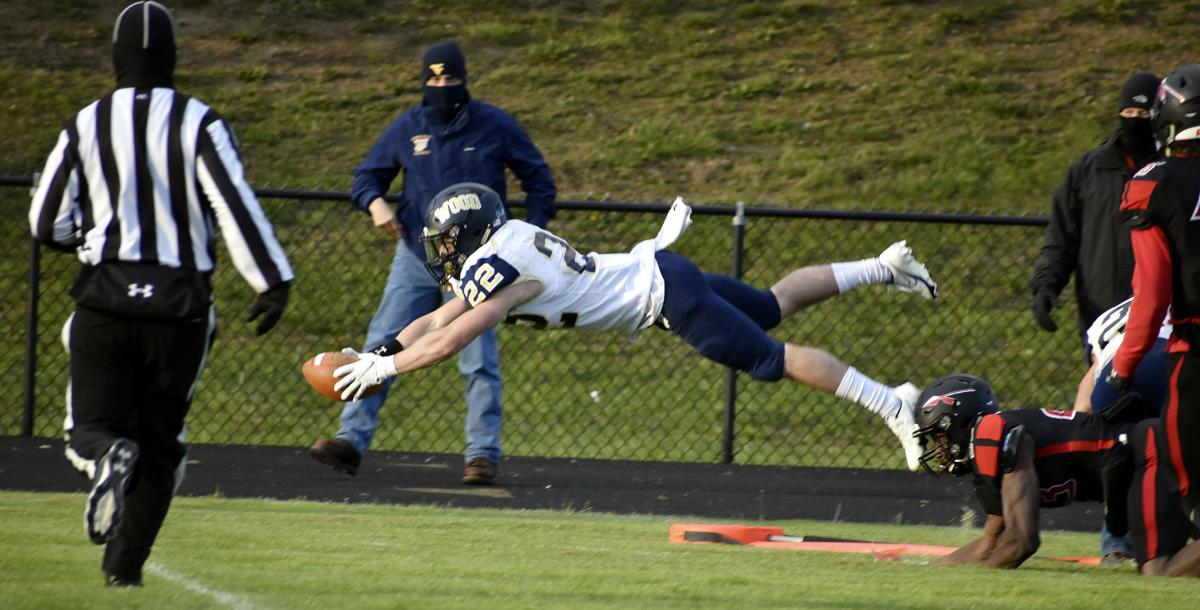 James Wood’s Jaden Ashby dives past Sherando’s Keli Lawson into the end zone to score on a 14-yard run late in the second quarter during Wednesday’s game. Ashby rushed for 174 yards and three touchdowns in the Colonels’ 36-20 victory. 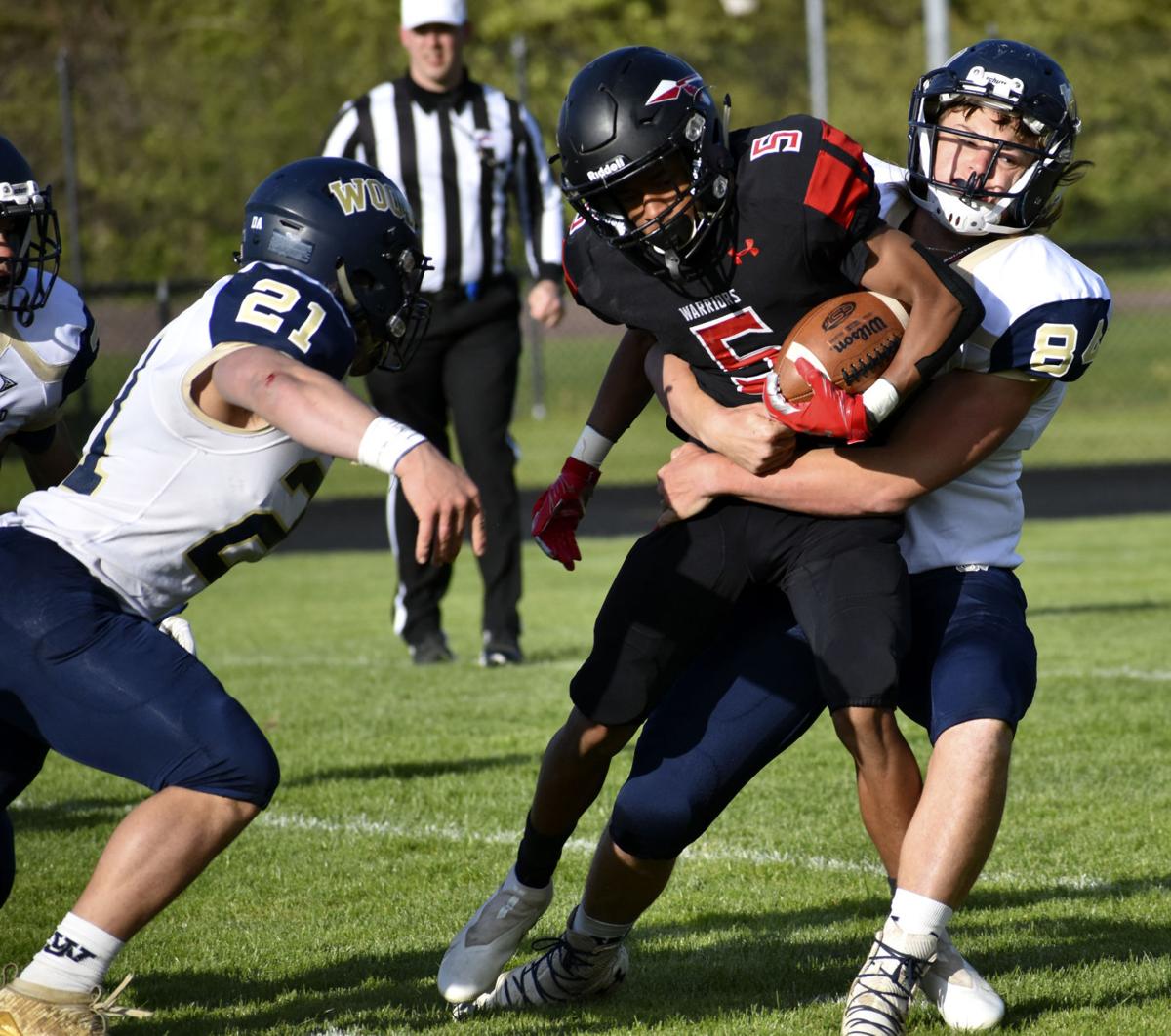 James Wood defensive lineman Clayton Jones wraps up Sherando’s A.J. Santiago as linebacker Joey Vitola (21) moves in to help during the first half of the Colonels’ 36-20 victory over the Warriors on Wednesday. 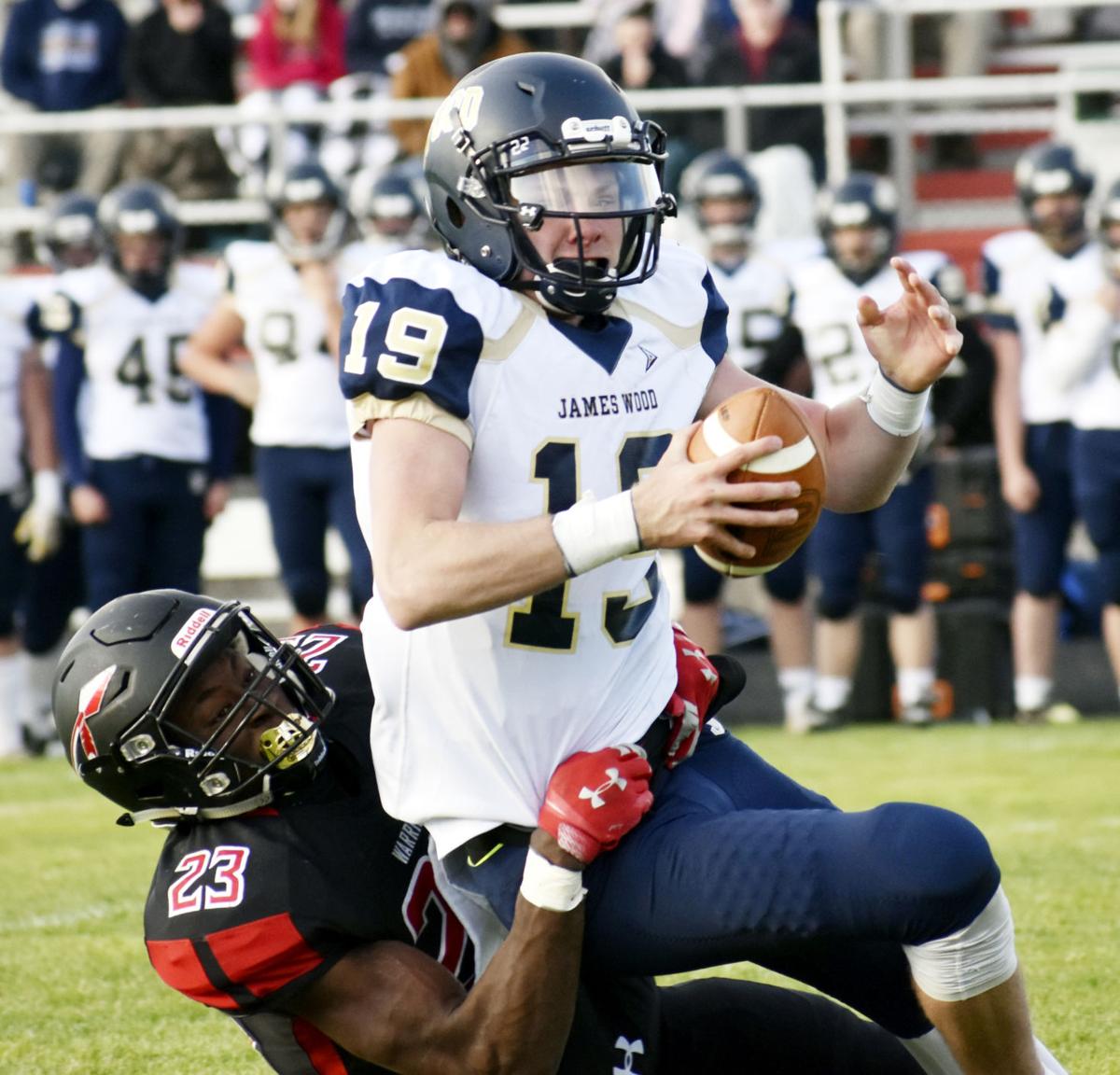 Sherando's Keli Lawson sacks James Wood quarterback Jayson Herndon during the first half of the Colonels' 36-20 victory over the Warriors at Arrowhead Stadium on Wednesday.

James Wood’s Jaden Ashby dives past Sherando’s Keli Lawson into the end zone to score on a 14-yard run late in the second quarter during Wednesday’s game. Ashby rushed for 174 yards and three touchdowns in the Colonels’ 36-20 victory.

James Wood defensive lineman Clayton Jones wraps up Sherando’s A.J. Santiago as linebacker Joey Vitola (21) moves in to help during the first half of the Colonels’ 36-20 victory over the Warriors on Wednesday.

Sherando's Keli Lawson sacks James Wood quarterback Jayson Herndon during the first half of the Colonels' 36-20 victory over the Warriors at Arrowhead Stadium on Wednesday.

STEPHENS CITY — James Wood had waited a long time to play a football game like Wednesday’s clash against Sherando at Arrowhead Stadium.

And for a couple of reasons, it was well worth the wait.

The Colonels, who had not played since Nov. 9, 2019, knocked off the Warriors for just the third time in school history, rallying for a 36-20 triumph.

James Wood had lost 13 straight since defeating Sherando in 2008 and had a 2-28 mark against the Warriors overall. Many of those losses have been lopsided, like last season’s 49-12 rout.

“This feels great,” said Colonels receiver/defensive back Jaden Ashby, who rushed for 174 yards and three touchdowns on just nine carries out of the Wildcat formation. “This is the best win I’ve ever had. For sure.”

“It feels amazing,” said lineman Clayton Jones, who anchored a defense that blanked Sherando in the second half. “Being a senior and smacking Sherando my last year before going, it’s probably the best feeling I’ve ever felt in my whole life.”

In addition to history, this game was a long-time coming in the COVID-19 pandemic. In a scheduled four-game season, James Wood had to cancel its first two games and was playing its season-opener, while Sherando was competing in its finale.

Yet, it was the Warriors who made the most big mistakes with five turnovers, compared to one for the Colonels.

“I wasn’t surprised that they played well because I’ve seen it in practice,” James Wood coach Ryan Morgan said. “But again when you haven’t beaten someone in 13 years, you’re wondering if your best can beat their guys.”

Certainly it appeared that Sherando (3-1) had the upper hand heading toward halftime. The Warriors had rallied from a 10-0 first-quarter deficit to take a 20-10 lead on three second-quarter TD passes from Dylan Rodeffer, the final one with 1:09 left in the half.

But there would be a crazy finish to that final minute. With Sherando using a pair of timeouts with the hope of getting the ball back to try to score again with a heavy following breeze, the Colonels got a break.

A pass interference call on third-and-14 prolonged the drive and Ashby took over from there. He took a direct snap and broke loose around the right side for a 55-yard gain to the Sherando 14. On the next play, he rolled right again and dove into the end zone with 19.9 seconds left on the clock. A conversion pass failed making the score 20-16.

But the scoring wasn’t finished.

On the kickoff into the wind, the ball fluttered and fell between Sherando’s front and back lines and the Colonels recovered at the Warriors’ 31 with 18.8 seconds left.

Quarterback Jayson Herndon next lofted a strike to Ashby, who outfought a defender to haul it in at the Sherando 6. After the Colonels’ final timeout, Herndon rolled left and took off after seeing no one open. He powered his 6-foot-5 frame into the end zone with 3.6 seconds left and Chris Garcia’s extra point gave James Wood a 23-20 lead at the half.

“We try to capitalize on opportunities and … we don’t want to waste downs,” Morgan said. “Right there at the end of the first half, we took advantage of a mistake and Jayson Herndon punched it into the end zone. He’s tough to bring down. … When he ran it in if he would have been tackled at the 1- or 2-yard line, then time runs out. He took that big 6-foot-5 body and punched it into the end zone. It was awesome.”

“That 40-second sequence was obviously a huge momentum thing,” Hall said. “I think that just carried over. Our guys, we started to press because we are down and nothing is happening. Guys are trying to make ‘the play’ instead of just playing football and being consistent.”

Herndon said he thought the difference came after the break.

“The big momentum-shifter was after halftime and us coming out with energy,” Herndon said. “We were up barely at halftime. If we would have come out with no energy, I don’t think we would have stuck in it.”

Starting off the third quarter with the ball and with the wind at their backs, the Warriors weren’t able to get anything going until late in the period.

With Sherando starting at the James Wood 43 after a punt, Cameron Sullivan rushed four times for 30 yards and caught a pass for nine to give the Warriors first-and-goal from the 4.

James Wood’s defense stiffened. Two Sullivan rushes lost a total of a yard and on third-and-5, Matthew Dueweke got a strip sack on Rodeffer and pounced on the loose football.

After another punt, the Warriors started at the Wood 34, but Jones sacked Rodeffer for a three-yard loss on the first play, the last of the quarter. On fourth-and-3 from the 27, running back Aydan Willis was stopped a yard short of the first down with 10:47 to go.

The Colonels took over and made a methodical 10-play march, keyed by a 37-yard pass from Herndon to Ryan King. On third-and-6 from the Sherando 7, Herndon broke two tackles on a run up the middle for a touchdown. After the PAT missed, the Colonels held a 29-20 lead with 6:15 left.

From there, the Colonels defense was stout. They initially forced a turnover on downs. On the Warriors’ next possession, linebacker Blake Hounshell picked off a pass.

Three plays later, Ashby put the exclamation point on the evening. Taking off right out of the Wildcat, he slice through a hole and blazed down the sidelines for a 54-yard TD run. Garcia, who made a 25-yard field goal to open the scoring in the first quarter, tacked on the extra point that made it 36-20 with 2:34 left.

“I love having the ball in my hands,” said Ashby, who ran for a 41-yard TD in the first quarter and had three receptions for 42 yards. “I’m a playmaker. Whenever my team is one and they can make a block for me, I’m going to make a play.”

Hall said the Warriors knew that Ashby was dangerous, but weren’t sure what Morgan had planned.

“He had [218] out of their 260 [total yards]. I think that’s a clear picture of how good he is,” Hall said of Ashby. “Obviously, we knew he was a good player. That wasn’t a shock to us. It was figuring out how they were going to get him the ball. They did a lot of jets last year.”

“He’s a playmaker, so we try to get the ball to him in some different ways,” Morgan explained. “Sherando has a really good defense and a really good program, so we try to let our best athletes do the best that they can. With that, it was kind of let him get the ball and run. He made some people miss and outran some people. I don’t think there are many people in the area who can catch him.”

The Colonels defense completed the second half shutout with Andrew Waters recovering a fumble with 20 seconds left.

James Wood’s defense, giving up a lot of size to Sherando’s offensive line, held the Warriors to 107 yards on the ground.

“It was hard work and dedication,” Jones explained of the Colonels’ success. “In practice, the most competition is on those offensive and defensive lines. If we don’t push ourselves, there’s no use coming out here. We push each other every single day to get better and better so when we come out here and play big teams like this we can come and smack the run game down.”

Morgan said speed and tenacity played a big part in the defensive success.

“Obviously, they have more size than us, but we have quick, aggressive guys,” he said. “They’ve been giving us some problems [on offense] in practice all spring. We kind of thought their speed, quickness, aggression and relentlessness might pay off in the end.”

Rodeffer finished 18 of 38 for 210 yards and two interceptions in the cold, windy conditions. He threw a pair of TD passes to A.J. Santiago (seven catches, 90 yards), an eight-yarder and a beautiful diving 31-yarder, for the Warriors’ first two scores. He also flipped a four-yard TD pass to Willis on fourth down.

Hall blamed himself for his team’s rough night.

“It’s my job to get these guys prepared to play so you’re just kind of questioning everything you did,” he said. “Obviously, it’s our fourth game in 21 days so you’re trying to figure out how to manage that properly. … I think we probably weren’t emotionally ready the way we needed to be to play. The last 40 seconds of the first half was obviously a huge determining factor. We’re up 20-10. We’re calling timeouts to get another score and they score twice in the last 40 seconds and that’s a huge momentum thing.

“… Any time you have a team and give them life, all of the sudden they believe. Nothing happens in the third quarter and they believe more. Our guys were pressing. I think we were trying to make too many plays as opposed to just playing football. I think it was a lot of things, but ultimately it is my job to get them ready to go.”

The Colonels are back in action on Tuesday as they host Millbrook (1-2). They certainly want to win that one, having lost five straight to the Pioneers, but having ended a bigger losing skid felt pretty good Wednesday.

“It’s a great win for the program and the kids,” Morgan said. “The kids have been waiting a long time for this. I’m just really proud of the guys who stuck through it because it’s been tough.”

“This means everything,” Ashby added after the Colonels’ loud postgame celebration. “We’ve been waiting. They’ve been beating us every year and to be able to come back and beat them like this, it feels real good.”

Wish we were allowed in to these games.

It was online, all FCPS athletics are live streamed online for this year.

Missed the online . . . where was it? I didn't think FCPS was streaming the outdoor games since a few spectators were allowed . . ..

If the game was online, it was not streamed by FCPS. FCPS only provided livestreaming for indoor events this year, and those are done. The FCPS plan does not include streaming outdoor events.