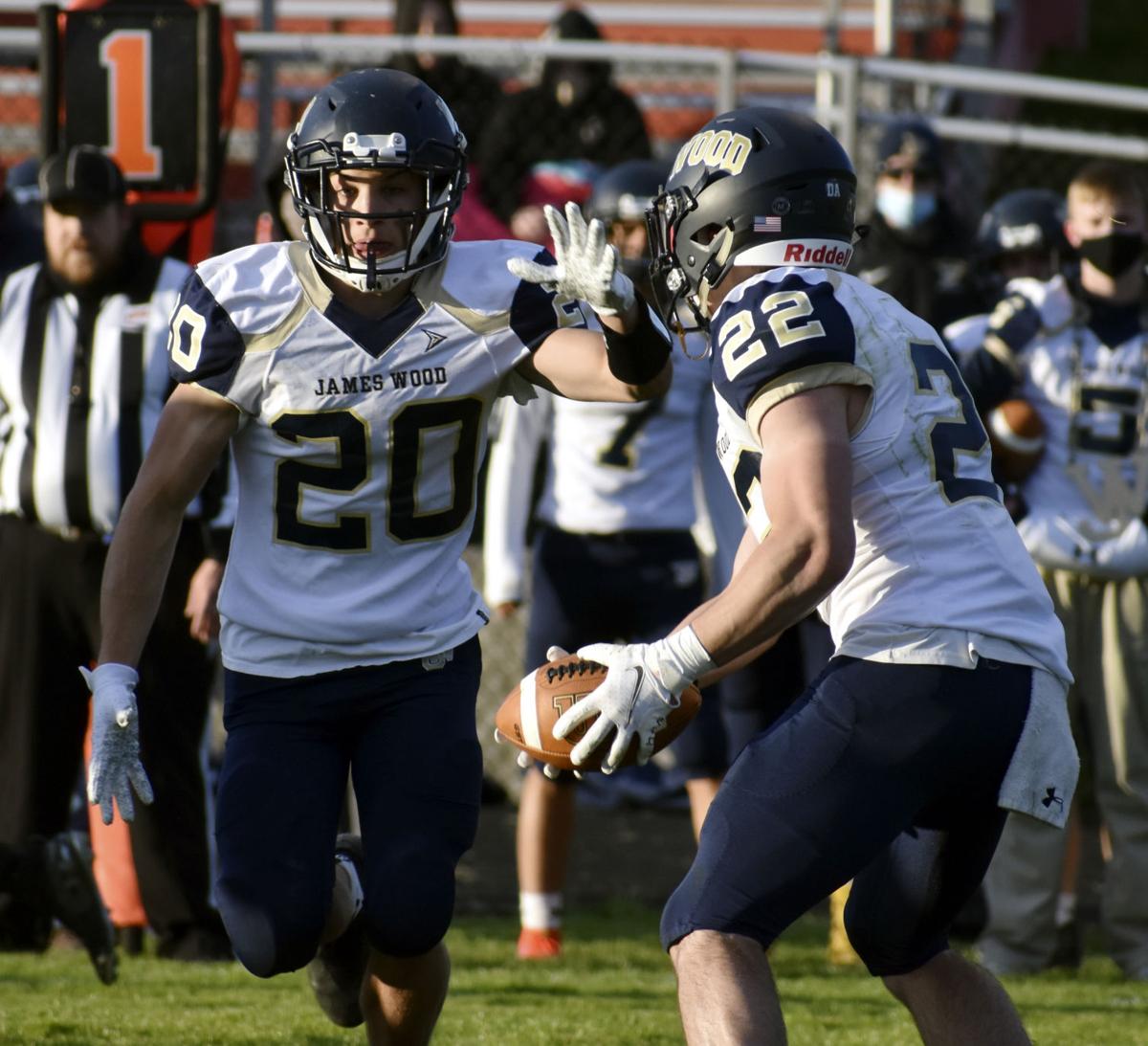 Jaden Ashby (22) fakes a handoff to Ryan King while running the Wildcat formation last week against Sherando. Ashby, who rushed for 182 yards and three touchdowns in a win over Sherando, will lead the Colonels against Millbrook tonight at Kelican Stadium. 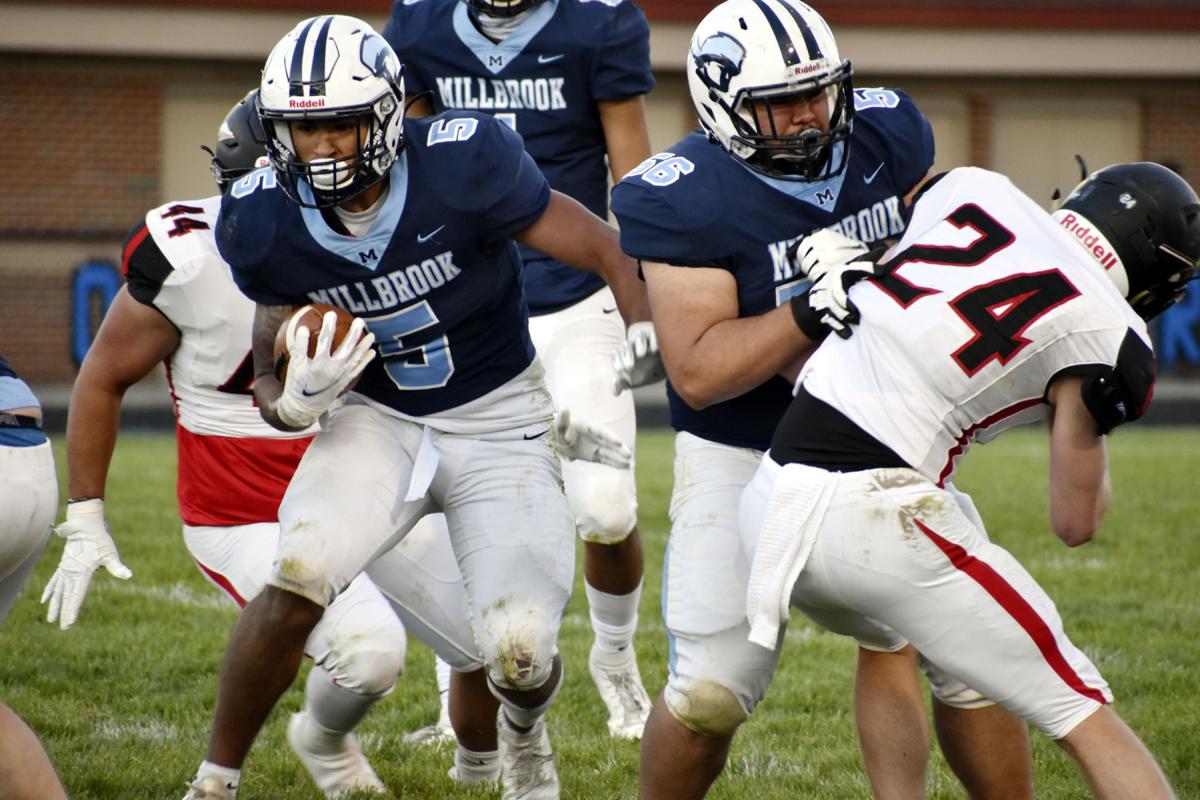 Diante Ball, who has rushed for 247 yards and five touchdowns, leads the Millbrook offense against James Wood tonight.

Jaden Ashby (22) fakes a handoff to Ryan King while running the Wildcat formation last week against Sherando. Ashby, who rushed for 182 yards and three touchdowns in a win over Sherando, will lead the Colonels against Millbrook tonight at Kelican Stadium.

Diante Ball, who has rushed for 247 yards and five touchdowns, leads the Millbrook offense against James Wood tonight.

Now in the finale of their two-game Frederick County season tonight, the question is whether the Colonels can halt another streak against a county rival.

Fresh off of its 36-20 victory that ended a 13-game losing skid against Sherando, James Wood will try to end Millbrook’s five-game dominance over the Colonels in a 6 p.m. matchup against the Pioneers at Kelican Stadium.

James Wood hasn’t topped Millbrook since a 21-20 decision in 2014. Last year’s 40-37 shootout loss was the closest the Colonels have come to beating Millbrook recently.

James Wood coach Ryan Morgan said he gave his players about 24 hours to enjoy the win over the Warriors, a contest where they rallied from a 20-10 deficit, before beginning to concentrate on Millbrook (1-2), which has lost twice (31-17 and 31-7) against Sherando this spring.

“Millbrook is tough,” Morgan said. “They’re a scrappy team. … One of the big things we talked about is the way they get to the ball on defense. They’re always coached well and they are aggressive. It seems like anytime somebody catches or runs the ball there’s a bunch of white helmets at the football in a hurry.

“On offense, they have some good athletes with [Diante Ball] in the backfield and Detric Brown at quarterback. They’re going to be tough in a few different ways.”

The Pioneers had a week off last week, but could do little to prepare for the Colonels since there was no scrimmage or game film prior to the Sherando game. Millbrook coach Josh Haymore said his team worked on fundamentals and special teams before getting game film after the Sherando clash.

Haymore said the film showed an opportunistic opponent, one that caused five turnovers from the Warriors.

Certainly wide receiver Jaden Ashby made the most of his chances when operating out of the Wildcat formation. Taking direct snaps, Ashby rushed for 182 yards on nine carries and had touchdown runs of 14, 41 and 54 yards. He also had two catches for 47 yards.

“I think if he’s on the field, he’s a threat,” said Haymore when asked how dangerous the speedy James Wood junior is. “When you’re the best player on the team, whether it’s this year, last year or next year, he’s a good football player and he will always be a threat.”

The Colonels’ defense, led by 14 tackles from Malachi Lane and 11 from Clayton Jones, blanked Sherando in the second half last week.

“It gave them a lot of confidence,” Morgan said. “They’ve been doing it well in practice against our offense, so I think they had some confidence coming in. To do it against a team that has a couple of Division I players and lots of good athletes, I think that gave them an extra boost of confidence.”

Millbrook will challenge that defense with Ball, who has rushed for 247 yards and five TDs, and Brown, a dual-threat quarterback who has thrown for 530 yards and two scores. Slot receiver Braden George (12 catches), Ball (11 catches) and speedy Jacob Ford (6 catches) have been Brown’s favorite targets.

To win tonight, both coaches are emphasizing the same thing — don’t lose the football.

“[We need to play] mistake-free football,” Haymore said. “The Fauquier game and the second Sherando game, we had some turnovers in there that we could have done without. Our kids played hard, but if we get rid of those turnovers it would have been a little bit different ballgame.

“When we’re on defense, they’re going to have two guys in the backfield who can run the ball real well. It’s tough enough when you have one guy back there who can run. With two of them, it’s really tough. And they have a couple of good receivers.”

The contest will be the one and only home game for the Colonels, who had to cancel their first two games.

“Hopefully it will be fun for the fans to get back out there,” Morgan said. “For the kids, they have really been wanting a Senior Night and playing in front of their home fans and in their home stadium one final time. … I felt bad for these kids for 16 or 17 months and hopefully have a good experience on Tuesday night and have a good Senior Night.”

Haymore said his players are looking forward to their final game of the season.

Morgan said a victory over the Pioneers would mean a lot, but the Colonels have four tough quarters looming before that can happen.

“James Wood for the past several years has been trying to kind of claw its way to the top,” Morgan said. “We’re still trying to climb the ladder. Millbrook and Sherando have special programs. They’re a great measuring stick for us. It would be great to get another victory. If we’re able to achieve that feat, maybe that’s something we can consider after the game and after the season, but right now we’re focused on beating Millbrook because they’ve got a good program.”