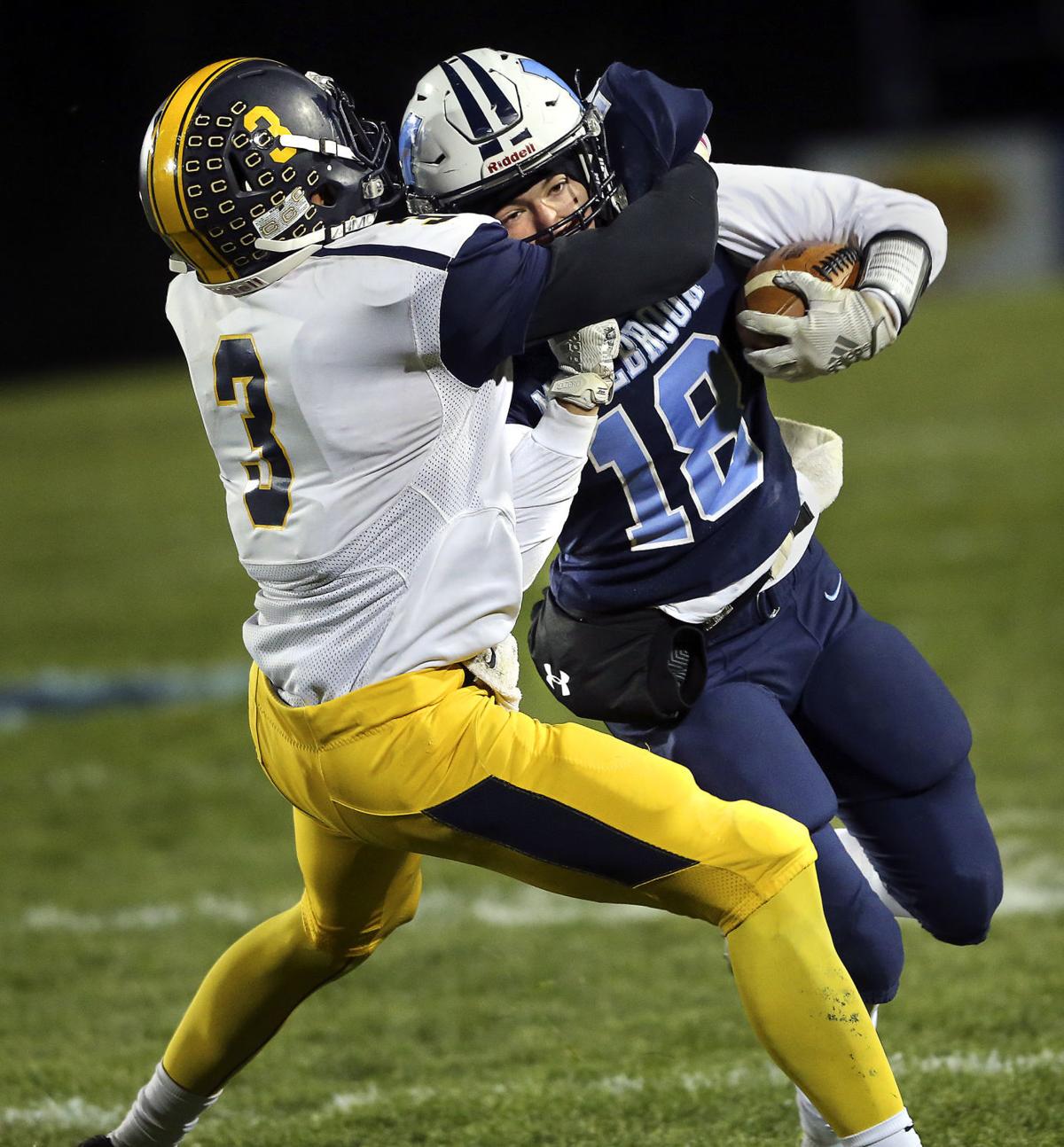 Millbrook running back Gavin Evosirch tries to break the tackle of Culpeper County’s Armani Hoffman in the first quarter Friday. Evosirch rushed for 141 yards to help the Pioneers clinch a Region 4C playoff berth with a 19-6 win. 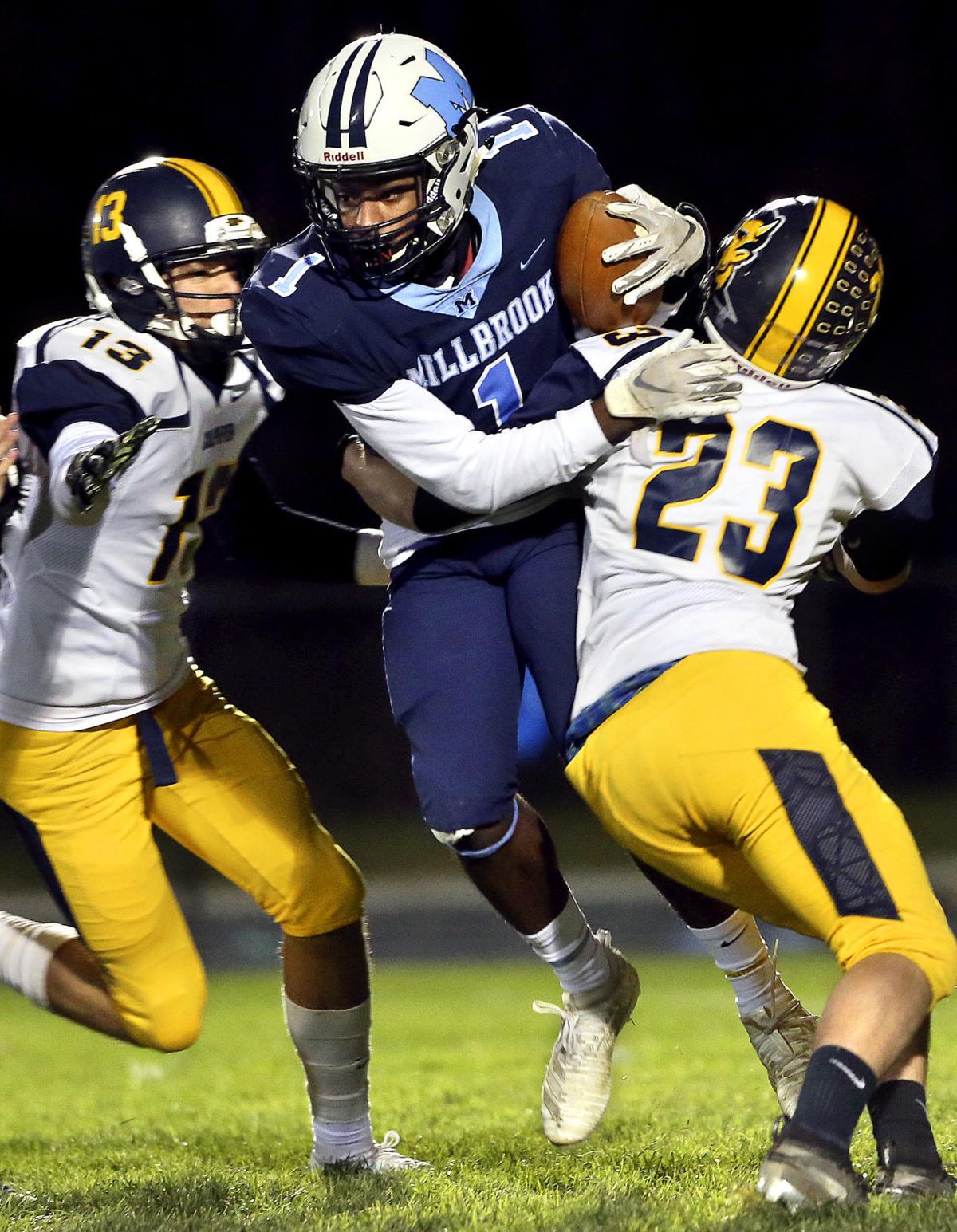 Millbrook's Jordan Jackson runs between Culpeper County defenders during a first-quarter punt return on Friday. Jackson scored a pair of rushing touchdowns in the Pioneers' 19-6 victory. 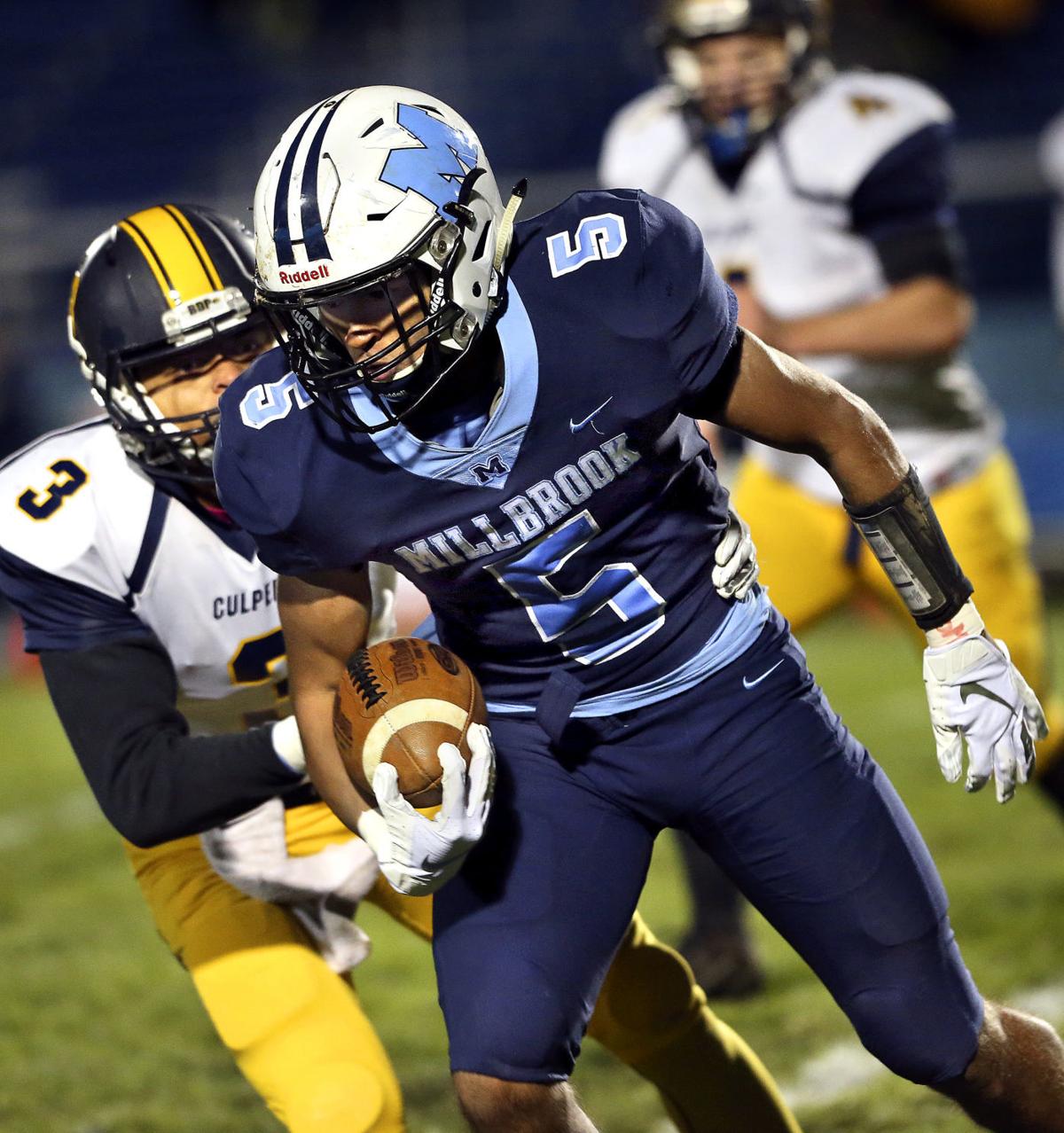 Millbrook running back Diante Ball runs after a reception in the first quarter as Culpeper County’s Armani Hoffman pursues on Friday. Ball had a rushing touchdown in the second half.

Millbrook running back Gavin Evosirch tries to break the tackle of Culpeper County’s Armani Hoffman in the first quarter Friday. Evosirch rushed for 141 yards to help the Pioneers clinch a Region 4C playoff berth with a 19-6 win.

Millbrook's Jordan Jackson runs between Culpeper County defenders during a first-quarter punt return on Friday. Jackson scored a pair of rushing touchdowns in the Pioneers' 19-6 victory.

Millbrook running back Diante Ball runs after a reception in the first quarter as Culpeper County’s Armani Hoffman pursues on Friday. Ball had a rushing touchdown in the second half.

WINCHESTER — The math for the Millbrook High School football team was simple, win and you’re in the Region 4C playoffs.

On Friday it wasn’t pretty and it certainly wasn’t easy, but the Pioneers made enough plays and rode a dominating performance by their defense to a 19-6 victory over Culpeper County.

Millbrook (7-3, 5-2) locks up its fifth straight playoff birth and now must travel to Dulles District champion Broad Run (10-0) at 7 p.m. on Friday. The Pioneers finished in a three-way tie for second place in the Class 4 Northwestern District, but were seeded fourth based on power rankings.

Culpeper County (1-9, 0-7) failed to win a league game in its first season in the Northwestern District.

Knowing they were playing to extend their season, the Pioneers struggled offensively in the first half committing three turnovers, one that led directly to Culpeper’s only score of the game.

But the Pioneers defense showed it had every intention of playing next week. Millbrook shut down an already struggling Culpeper offense that played without starting quarterback JoJo Crenshaw who was on the sideline dressed in street clothes with an apparent injury.

For the game Culpeper had 11 possessions — six ending with punts, three with interceptions and the other two the Blue Devils turned the ball over on downs.

Offensively, Jordan Jackson ran for two touchdowns and Gavin Evosirch, who had missed some time with an injury, rushed for 141 yards on 16 carries. Quarterback Kaden Buza completed 14 of his 17 pass attempts for 96 yards.

“This means we get one more week, that’s what matters as long as you get one more week,” Millbrook coach Josh Haymore said. “Execution, we didn’t execute and the kids know it. I thought our defense played well and our special teams were on it.

“In the second half we executed better, we changed some sets and that helped.”

With a little more than four minutes remaining in the first quarter, the Pioneers’ special teams set up the offense with great field position after partially blocking a punt which was downed at the Blue Devils’ 24.

Buza and the offense took seven plays to get on the board as Jackson took a reverse and went seven yards for the score.

Millbrook’s next three possessions were ones it would like to forget. The three drives totaled eight plays, with two turnovers and a punt.

The third drive got Culpeper on the board. The Pioneers picked up 17 yards on the first two plays, but on the next play Buza threw a short pass to the near side which was intercepted by Culpeper defensive lineman Bracken Hibbert.

Though Hibbert doesn’t get to carry the ball much he showed he knew what to do with it when he got it. He fought off a couple of would-be Pioneers tacklers and rumbled 30 yards for a touchdown. A bad snap on the extra point kept Culpeper for tying the game before the half.

if the Pioneers’ defense was good in the first half, it was amazing in the last two quarters. In five second-half possessions, Culpeper ran just 26 plays and picked up only two first downs.

Culpeper did get into Millbrook territory on its opening drive of the second half, but an interception and 45-yard return by T.J. Spain set up the Pioneers’ offense at the Blue Devils’ 29.

Four plays later, Jackson scored on the same end around play, getting into the end zone from eight yards out.

The Pioneers’ final scoring drive started early in the fourth quarter at their 43. It only took Millbrook four plays, but one of those was a 50-yard run by Evosirch setting first-and-goal at the 8. Diante Ball took over from there, carrying the last two plays and scoring from the 3 with 9:25 left. The conversion run failed but the lead was 19-6.

Haymore said the Pioneers have some things to work on heading into the Region 4C quarterfinals.

“Obviously we’re very happy to be there [in the playoffs], but I think it’s just a matter of ... we’ve got to correct what we’ve got,” Haymore said. “The execution errors, we’ve got to play a little bit better and execute on offense. I thought our defense played good, I mean we had some times when we didn’t tackle.”