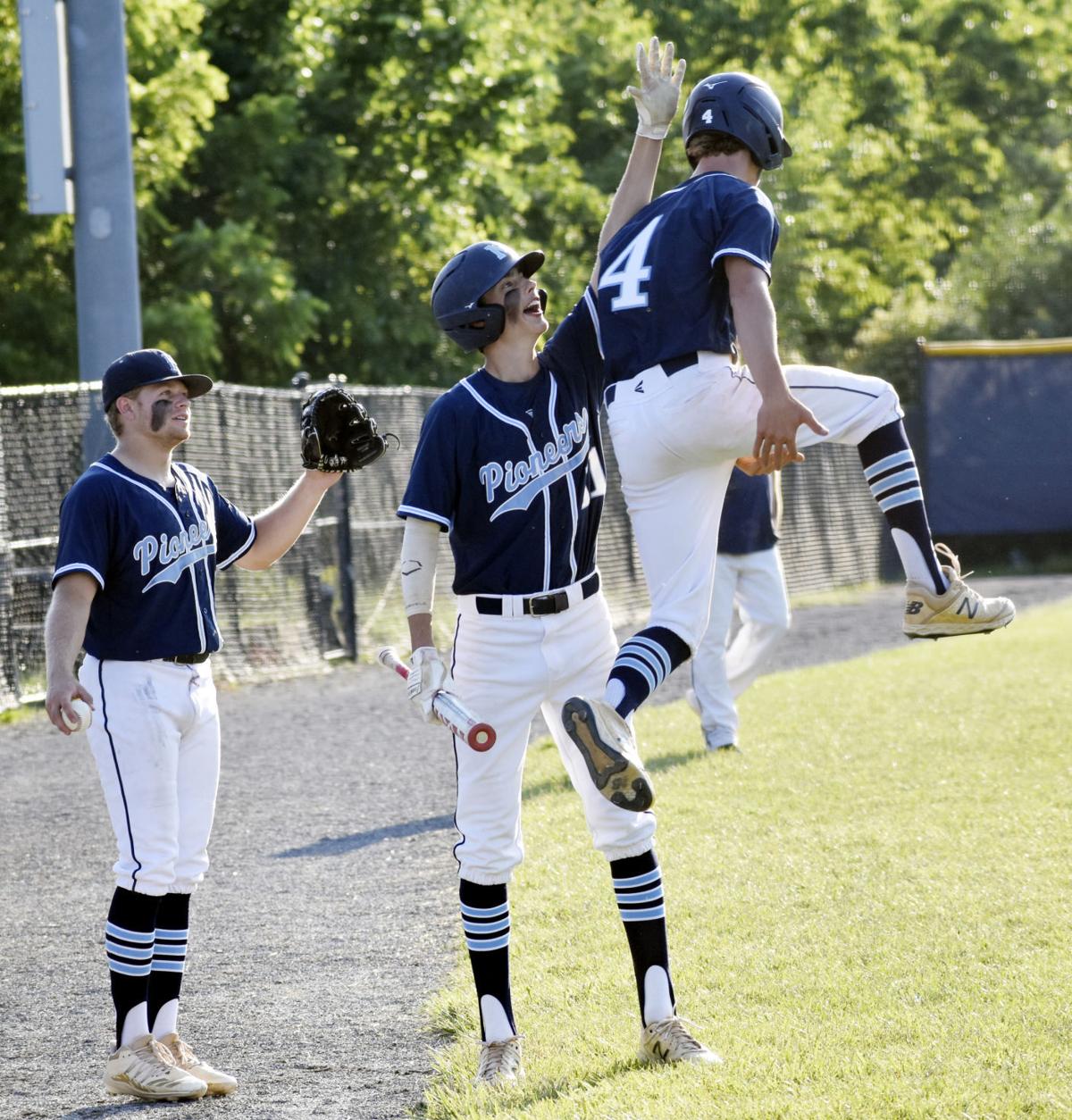 Millbrook’s Ethan Burgreen (4) celebrates with teammate William Croyle as Logan Hartigan looks on after Burgreen scored in the second inning of Friday’s Class 4 Northwestern District baseball semifinal against Fauquier. The Pioneers rolled to a 13-0 victory in five innings. 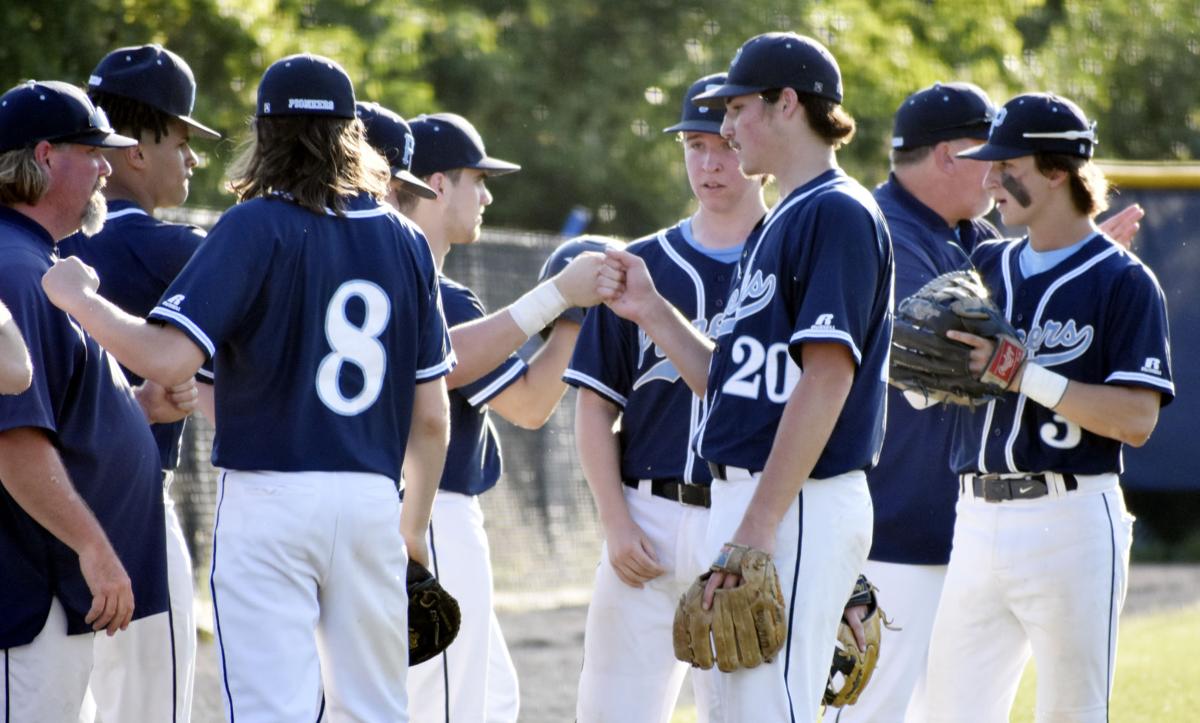 Millbrook's Jerrod Jenkins (20) is congratulated by his teammates after stranding two Fauquier baserunners in the second inning during Friday's Class 4 Northwestern District semifinal. Jenkins struck out 13 and tossed a two-hitter in the Pioneers' 13-0 victory in five innings. 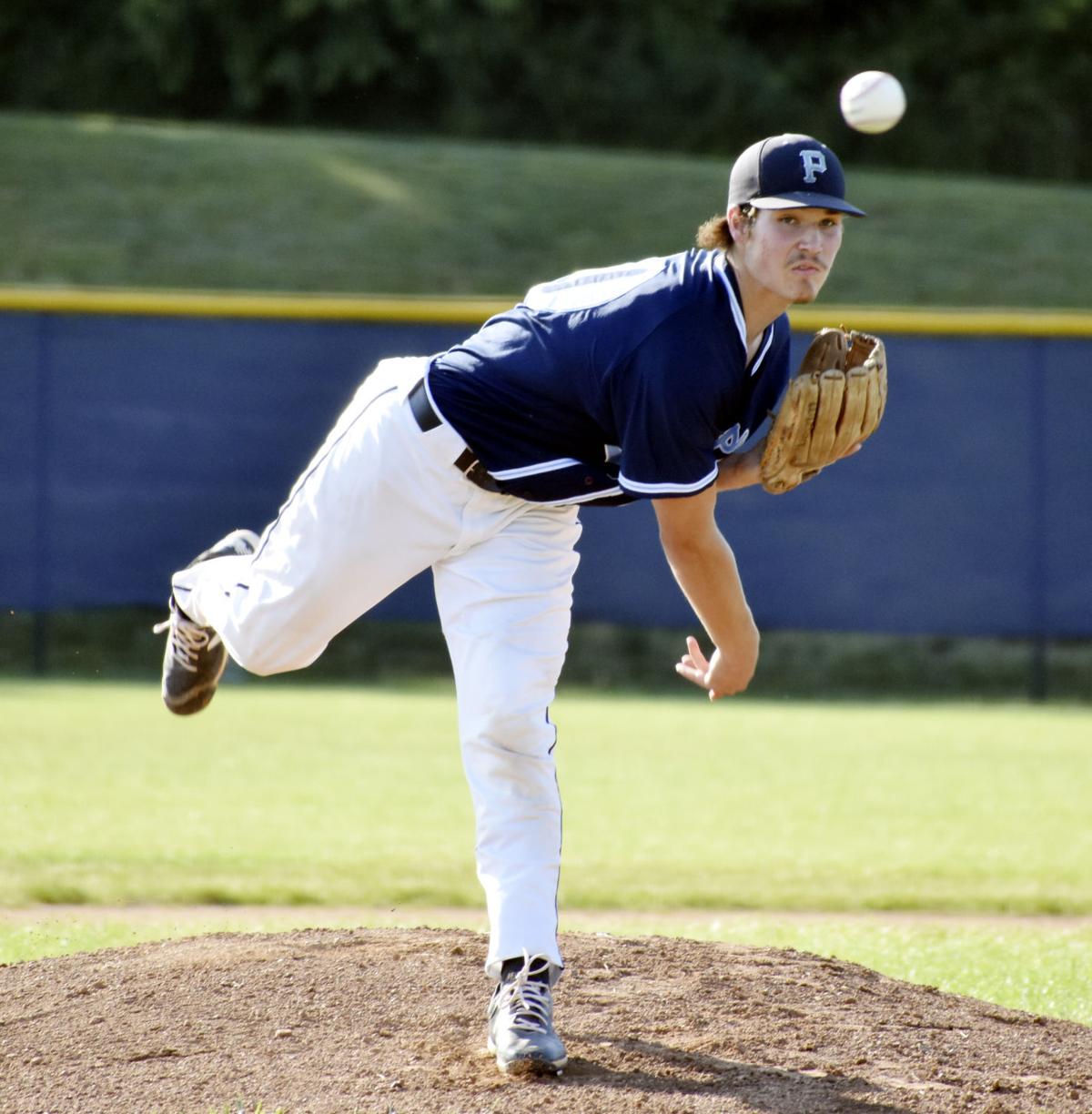 Millbrook’s Jerrod Jenkins (20) fires a pitch against Fauquier during Friday’s Class 4 Northwestern District semifinal. Jenkins struck out 13 and tossed a two-hitter in the Pioneers’ 13-0 victory in five innings. 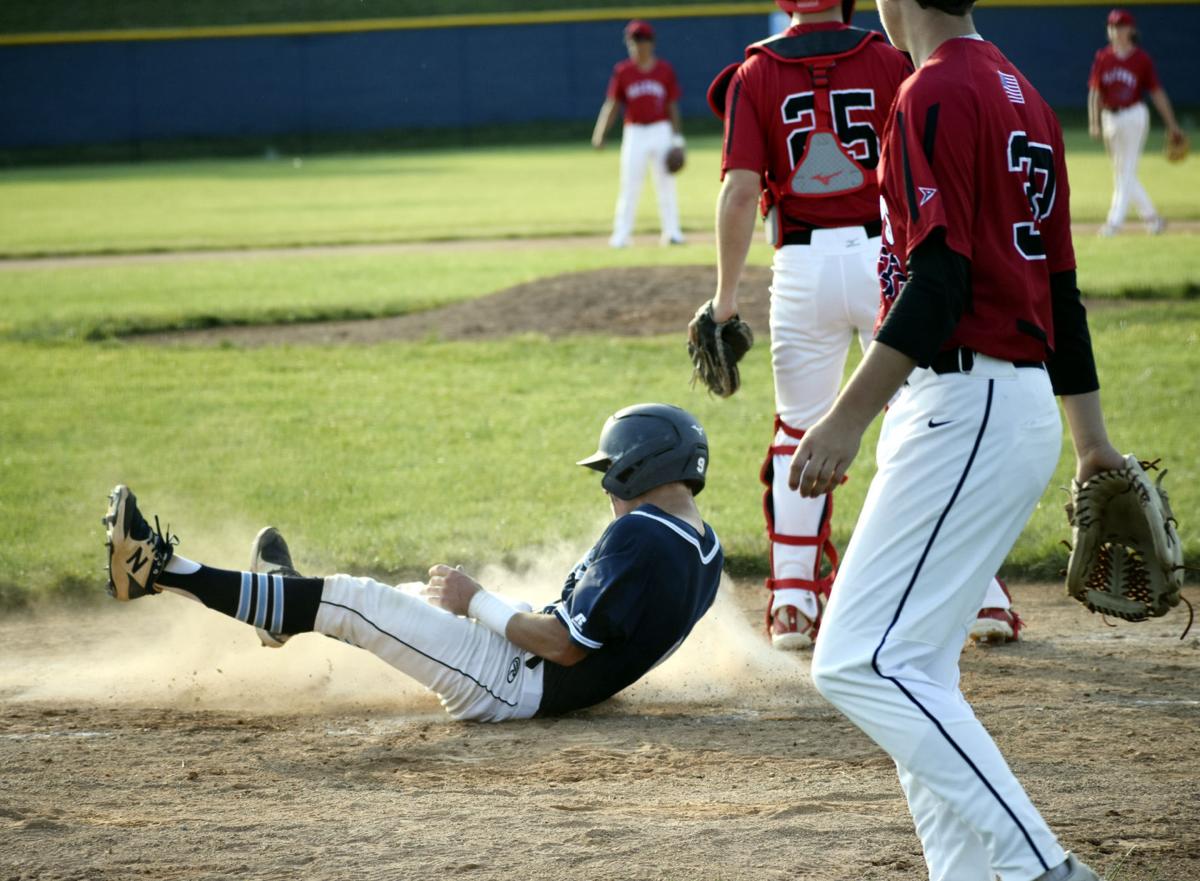 Millbrook's Carl Keenan tumbles across home plate to score in the second inning of the Pioneers' 13-0 district semifinal baseball win over Fauquier on Friday.

Millbrook’s Ethan Burgreen (4) celebrates with teammate William Croyle as Logan Hartigan looks on after Burgreen scored in the second inning of Friday’s Class 4 Northwestern District baseball semifinal against Fauquier. The Pioneers rolled to a 13-0 victory in five innings.

Millbrook's Jerrod Jenkins (20) is congratulated by his teammates after stranding two Fauquier baserunners in the second inning during Friday's Class 4 Northwestern District semifinal. Jenkins struck out 13 and tossed a two-hitter in the Pioneers' 13-0 victory in five innings.

Millbrook’s Jerrod Jenkins (20) fires a pitch against Fauquier during Friday’s Class 4 Northwestern District semifinal. Jenkins struck out 13 and tossed a two-hitter in the Pioneers’ 13-0 victory in five innings.

Millbrook's Carl Keenan tumbles across home plate to score in the second inning of the Pioneers' 13-0 district semifinal baseball win over Fauquier on Friday.

WINCHESTER — At Wednesday’s practice, the Millbrook High School baseball players got a chance to take a few cuts against former Pioneers standouts Anthony Simonelli and Trey Braithwaite, college stars who could have professional careers in their future.

While success was hard to find against those two, Millbrook hitters have been doing just fine so far in the Class 4 Northwestern District Tournament. On Friday, the Pioneers scored at least three runs in each of their four at-bats and rolled behind starter Jerrod Jenkins to a 13-0 rout of Fauquier in five innings.

Millbrook (13-1) will host James Wood (11-3) at 6 p.m. Tuesday in the district title game after both teams clinched Region 4C semifinal berths with triumphs on Friday. The Pioneers and Colonels split during the regular season.

Millbrook’s hitters have certainly flipped the switch in the postseason in wins over Handley (11-1 in five innings) and Fauquier. The Pioneers have scored in 8 of 9 at-bats and have tallied multiple runs in seven innings.

So what’s been different in the postseason?

“We’ve just been playing the way we’ve been playing,” said senior Logan Hartigan, who had two hits and drove in two against Fauquier. “Things are going our way finally. We’re hitting the ball and they’re starting to drop now. I think we are a great team and that’s the way it should be — hitting the ball, scoring runs and stringing hits together every inning.”

“We’re just putting balls in play and making them make a play,” said leadoff switch-hitter Carl Keenan, who had two hits, two walks, scored four times and drove in two. “Whenever we struggle, it’s because we’re not putting the ball in play.”

Certainly that was the case in the regular-season finale against James Wood when the Pioneers had some chances in a 3-2 loss, but had multiple strikeouts with runners in scoring position.

“This time last week, we were striking out in key situations,” Millbrook coach Brian Burke said. “We’ve just been stressing in our practices to find a way to put the ball in play and make the defense do something. Sooner or later, you’re going to get rewarded for doing so.”

Burke also said the top of the lineup is coming around. For a good part of the season, Hayden Burke, Nate Brookshire and William Croyle, the Nos. 6-8 hitters, were delivering in key spots.

On Friday, Keenan, Ethan Burgreen and Hartigan, the top three hitters in the order, were a combined 6-for-9 with seven runs scored and seven RBIs.

“I think after that loss to James Wood it brought out a new Millbrook and we just really want it,” Keenan said.

Hartigan said that discipline is the key. “I think for some of us the approach from the very beginning of the season has been a lot different from at the end,” the senior said. “We’re starting to take more pitches and just get the pitches we want.”

After Jenkins struck out the side in the top of the first, Millbrook put three quick runs on the board against a Fauquier team the Pioneers defeated 4-0 in the regular season.

Millbrook strung together four hits and a pair of walks. After the first run scored on a double-steal, Jenkins and Croyle had RBI singles.

The Pioneers tacked on three more in the second. Harrison Madagan plated one with a single and two more scored on an error.

Keenan had a two-run single and Burgreen added a sacrifice fly in a three-run third. After two runs scored on an error, Hartigan capped a four-run fourth with a two-run double, the Pioneers’ lone extra base hit in the contest.

Just one run would have been plenty for Jenkins. The junior right-hander took care of 13 of Fauquier’s 15 outs on strikeouts. He tossed a two-hitter and walked two, giving up just two singles up the middle to the Falcons (6-7).

“I think I was just keeping them off-balance,” Jenkins said. “I didn’t have the best command but I was in the zone enough to keep them off-balance to get the strikeouts and swings and misses.”

Brian Burke said that Jenkins bounced back nicely after a couple of games in which he pitched behind in the count too often.

“His last two outings he’s probably been more like a ‘B’ pitcher than an ‘A’ pitcher and he recognized that,” Burke said. “His focus tonight was to come out and work ahead in the count and what he did was absolutely amazing.”

What makes Jenkins, who has 65 strikeouts in 39 innings, so tough to hit?

“His velocity, he’s got a good arm,” said catcher Keenan. “He comes with a curveball that’s thrown pretty hard, too. He’s got a good changeup as well. They all come out of the same arm slot. It’s just hard for a hitter to see.”

While pleased to clinch a regional berth, the Pioneers were very businesslike following the contest. They are looking ahead to Tuesday and hoping to land a No. 1 seed in the regionals. They’ve had two tight games with James Wood, winning the first matchup 3-1.

“It’s great, but I guess we’re not done yet, though,” Hartigan said of earning the regional berth. “We just want to win the [district]. That’s the first thing and we’ll see what happens later.”

Burke says his team has been determined throughout the season.

“This has been a special group from the start,” Burke said. “The whole coaching staff has recognized it. We can’t put a finger on it. I don’t know if it was the season that was missed last year that’s brought them closer and a willingness to put others in front of themselves and not get caught up in a numbers game and how they’re doing personally.

“These kids are communicating in the dugout. They’re coming back talking about pitch-by-pitch and what they saw. They’re giving outstanding advice to the next hitter and down the line. We’ve probably had that before, but it’s been very noticeable this year. … They want to do something that no other team has done since 2014 and would love to have the opportunity to play in the state tournament.”