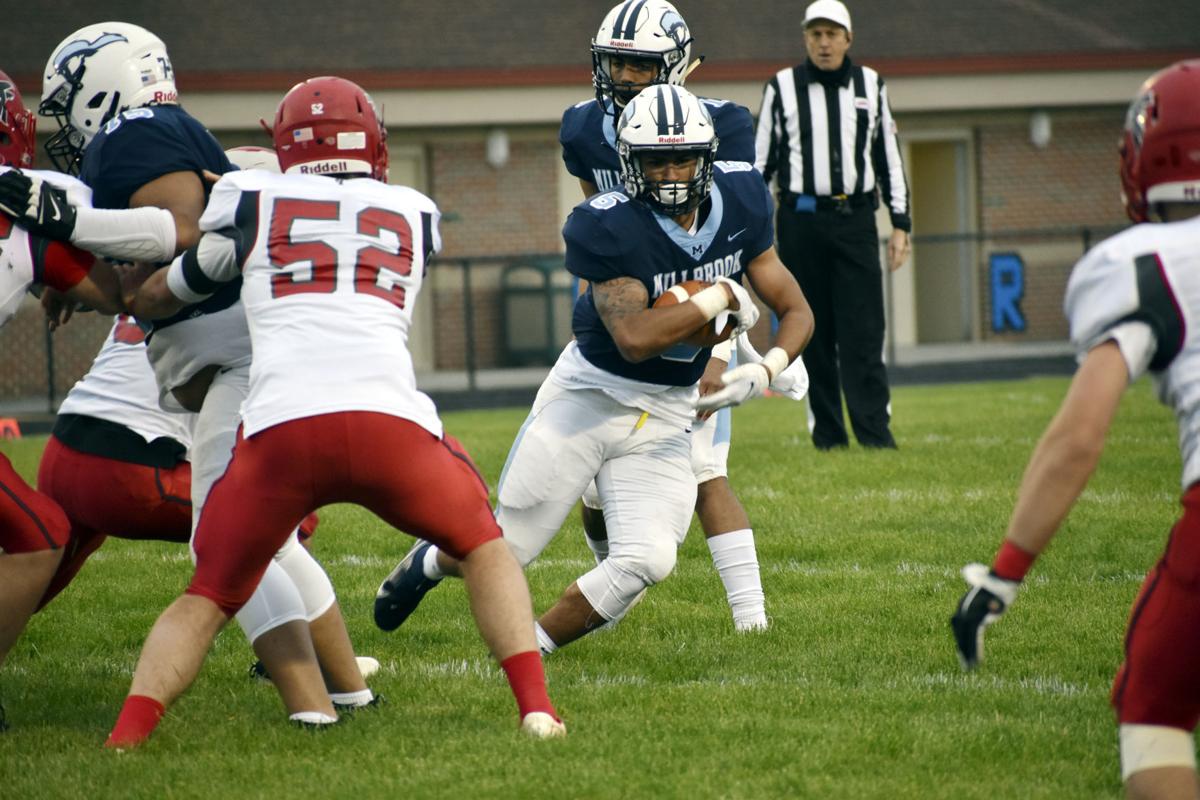 Millbrook running back Diante Ball cuts toward a hole as Fauquier’s John Carneckis (52) defends during Friday’s football game. Ball rushed for 86 yards and three touchdowns in the Pioneers’ 36-29 victory. 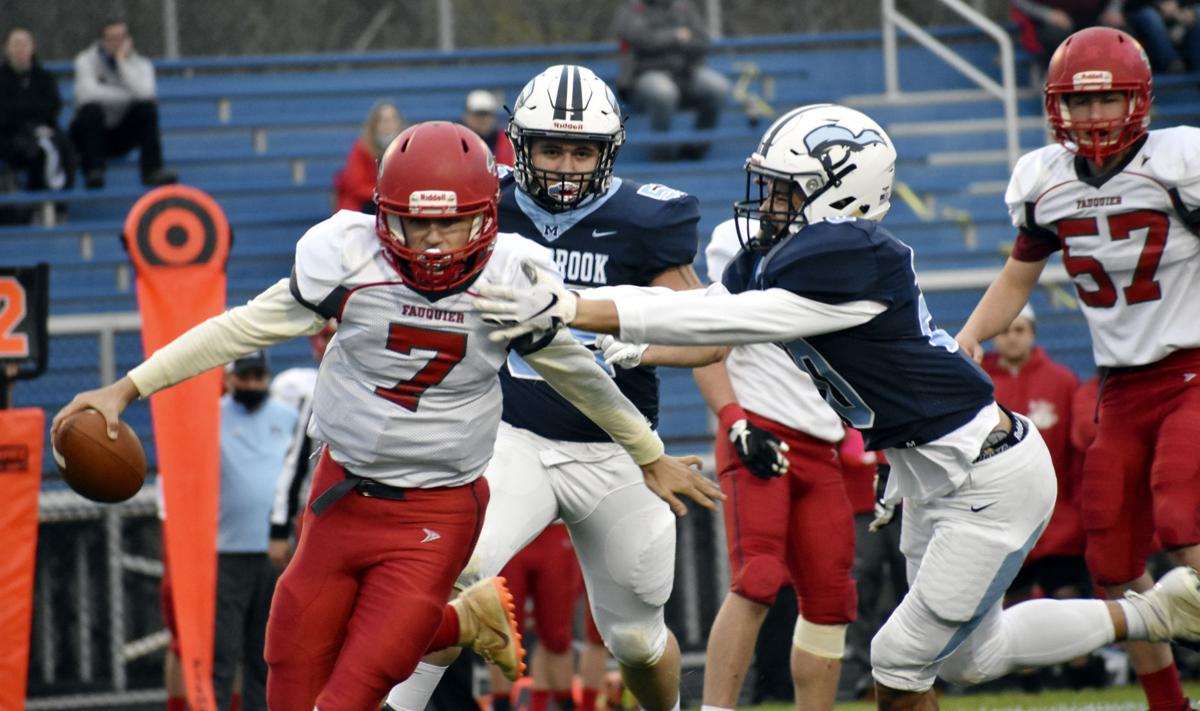 Millbrook’s Jayden Banks pressures Fauquier quarterback Shane Pifer (7) as teammate Christopher Leverich joins the chase in the the first quarter of the Pioneers’ 36-29 win over the Falcons on Friday. 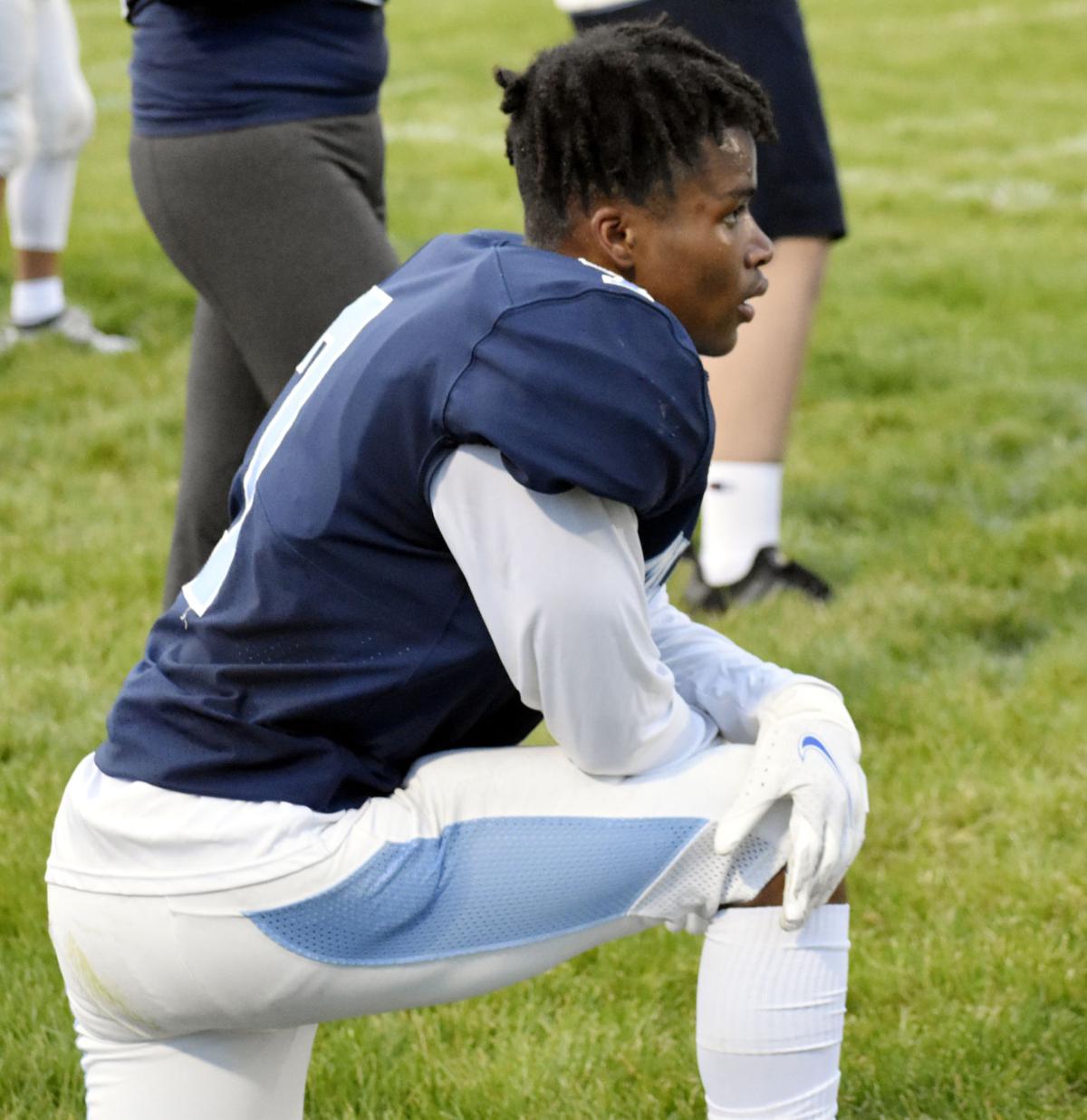 Millbrook's B.J. Canada catches his breath on the sidelines after returning an interception 103 yards for a score during the Pioneers' 36-29 win over Fauquier on Friday.

Millbrook running back Diante Ball cuts toward a hole as Fauquier’s John Carneckis (52) defends during Friday’s football game. Ball rushed for 86 yards and three touchdowns in the Pioneers’ 36-29 victory.

Millbrook’s Jayden Banks pressures Fauquier quarterback Shane Pifer (7) as teammate Christopher Leverich joins the chase in the the first quarter of the Pioneers’ 36-29 win over the Falcons on Friday.

Millbrook's B.J. Canada catches his breath on the sidelines after returning an interception 103 yards for a score during the Pioneers' 36-29 win over Fauquier on Friday.

WINCHESTER — When football teams hold up four fingers before the start of the fourth quarter, it signifies that the final period is where games are won.

Certainly, that was the case for Millbrook High School on Friday. Trailing Fauquier 22-21 early in the period, the Pioneers got some big stops on defense and two touchdown carries and a conversion run from Diante Ball to pull out a 36-29 triumph.

B.J. Canada returned an interception 103 yards for a score and Detric Brown threw a 60-yard TD strike to Jacob Ford on the Pioneers’ only offensive play of the second quarter as Millbrook (1-1) outlasted the Falcons (2-5) in a “Plus One” game.

“I thought the fourth quarter was the best quarter we played,” Millbrook coach Josh Haymore said. “We finished the game well. We started out slow in the first half. We put points on the board which was good. We still drove and moved the ball. … The way we played the fourth quarter really showed me what kind of team our team is. They showed a lot of heart.”

Two plays into the quarter, the Pioneers found themselves trailing 22-21 after Fauquier’s Grayson Kramer went nine yards for his second TD of the game.

But the Pioneers’ defense came up with three consecutive stops and the offense took advantage twice on short fields after the Falcons botched two special teams plays.

The first stop came after a Pioneers turnover as the defense surrendered just two yards on three plays. On the Falcons’ punt attempt, quarterback and punter Shane Pifer put his knee to the ground while fielding a low snap which marked him down at the Fauquier 45.

Following a 16-yard completion from Brown to Braden George, Ball took care of the rest of the drive. He took a pitch going left for 14 yards and took a pitch going right the final 15 yards, following fine downfield blocking. He bulled in on a two-point conversion to make it 29-22 with 8:13 left.

The Pioneers couldn’t convert on Joshua Lonas’ interception, but got the eventual winning score on another three-and-out and another low snap. Pifer had to fall on the wayward snap at the 20.

Ball, taking direct snaps in the shotgun, ran twice to the right gaining eight yards and then waltzed in from the 12. Patrick Sigler’s extra point made it 36-22 with 4:23 left.

“I just put trust in my team,” said Ball of his two scores in the period. “They blocked. I followed my team and we played as a family. When I get past the line, I have so many people blocking for me. I’m just thankful they block past the play and play with their hearts.”

Fauquier wouldn’t go away, as it marched 65 yards to cut the lead to one score. Usual starting quarterback J.T. Diehl, who played entirely at running back on offense Friday, scored his second TD of the game on a five-yard run to bring the Falcons to within 36-29 with 2:06 left.

Millbrook’s Aidan Long recovered the ensuing onside kick. With Fauquier having used all of its timeouts, the Pioneers were able to run out the clock for their first win since Nov. 8 of 2019.

“It’s crazy,” said Ball of the triumph. “It’s been a very long time [since we won]. It’s our first home game and to catch a win feels good.”

“It definitely means a lot,” Canada added. “A lot of us haven’t played in like forever. Coming out here for our first home game in front of 500 people, it means a lot.”

After a scoreless first quarter, the Pioneers ran just one play in the second quarter but led 14-7 at the half.

Fauquier ate up most of the period with a pair of drives, but the Pioneers turned one of those into points. On first-and-goal from the 10, Pifer fired a pass into the right side of the end zone and found Canada instead. The junior caught the ball about three yards deep in the end zone and came rushing out with a head of steam. No one could catch him as he followed his teammates down the sidelines.

“There’s not much to say,” said Canada of the big play. “I caught the ball. My teammates blocked in front of me. I trusted them, followed them and took it all of the way.”

Canada admitted he was a little tired after the 100-yard sprint, but was he was glad to make a big play. “Going to the sideline I was about to throw up,” he said with a chuckle. “It definitely means a lot to hype up the team and get some momentum. On my part I feel good that I was able to help out the team.”

Thanks primarily to the running of Diehl, who gained 160 yards on 25 carries on the evening, the Falcons marched 84 yards and erased more than eight minutes off the clock. Kramer capped the drive with a 15-yard run and Diehl’s extra point tied the score at 7-7 with 1:09 left.

Taking over at their 40 with 1:07 to go in the half, the Pioneers needed just one play and 10 seconds to get the lead back.

Brown lofted a pass to Ford down the left sideline and the senior shucked a tackler to get into the end zone. The strike made it 14-7 at the half.

A bizarre sequence in the third quarter helped Fauquier get its first lead. Millbrook had first-and-10 at the 50, but a series of penalties and losses moved the ball all the way back to the 9 and a fumbled punt snap led to a safety. After the free kick, the Falcons went 40 yards with Diehl bulling over from the 4 to make it 16-14.

Millbrook got the lead back after Brown’s 45-yard scramble set up Ball’s 7-yard TD.

George also had an interception as the Pioneers picked off Pifer, listed on the Falcons’ JV roster, three times. Christopher Leverich and Markell Harrison led the defensive line.

The Pioneers now get a second chance at Sherando (2-0), which defeated them 31-17 in their season opener. Millbrook hosts Thursday’s clash at 6 p.m.