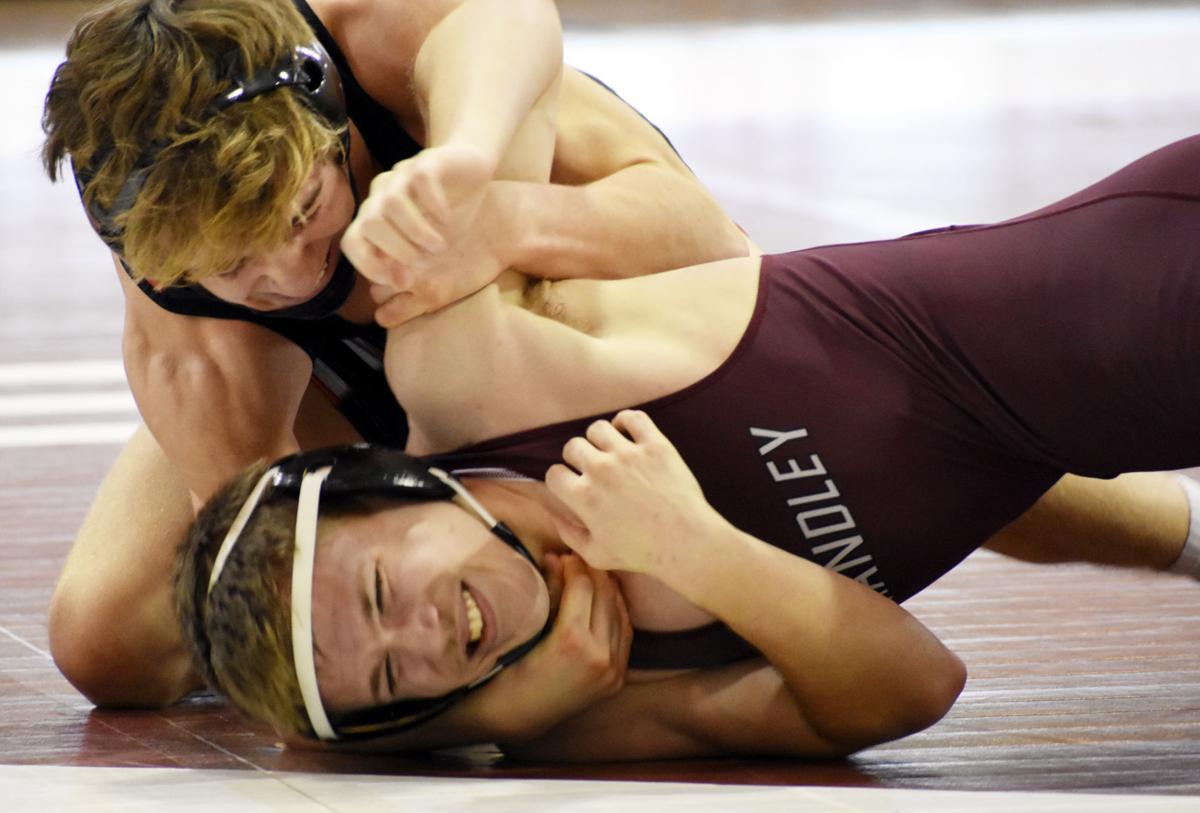 Sherando’s Heath Rudolph turns Handley’s Grayson Haines during a recent 145-pound match. The Sherando junior is 20-3 so far this season. 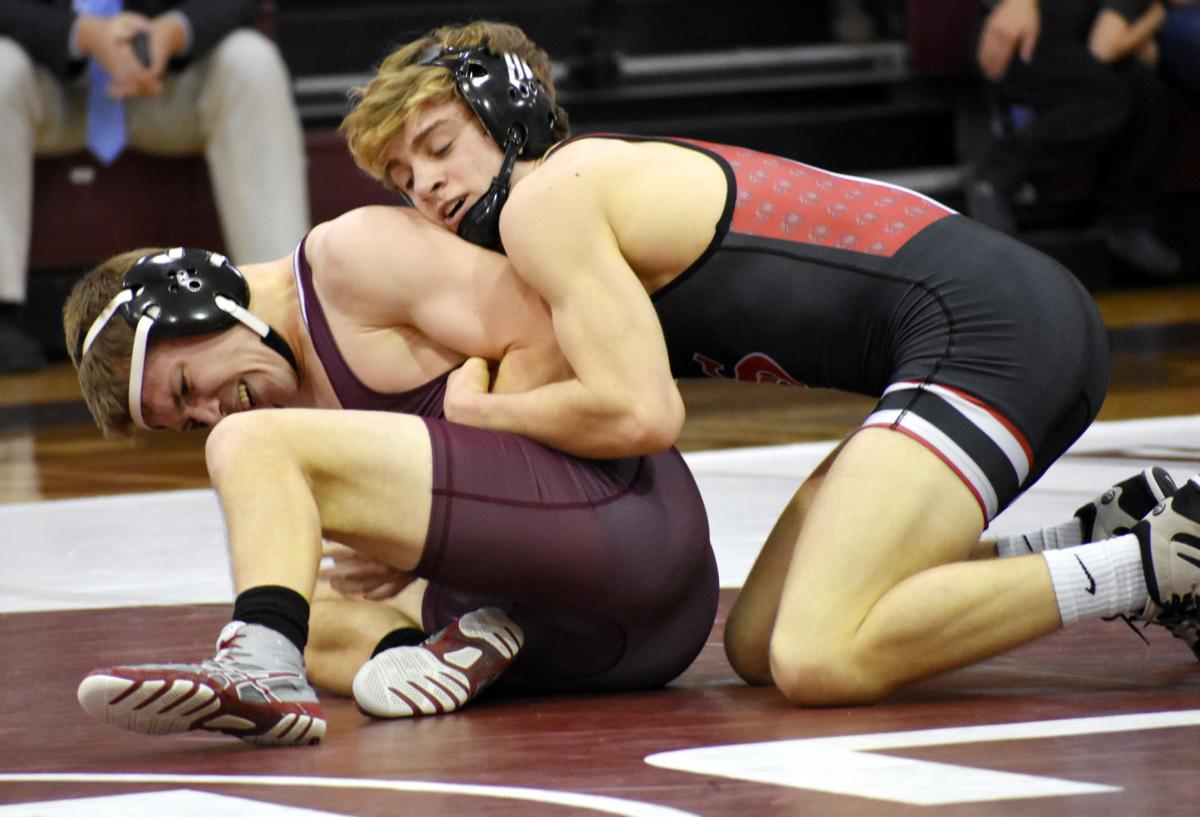 Sherando’s Heath Rudolph (right), who placed fifth at 145 pounds at last year’s Class 4 tournament, is off to a 20-3 start with 10 pins this season.

Sherando’s Heath Rudolph turns Handley’s Grayson Haines during a recent 145-pound match. The Sherando junior is 20-3 so far this season.

Sherando’s Heath Rudolph (right), who placed fifth at 145 pounds at last year’s Class 4 tournament, is off to a 20-3 start with 10 pins this season.

STEPHENS CITY — For Sherando’s Heath Rudolph, his high school wrestling career has always been about progress.

It was a theme that popped up several times as Rudolph discussed his two-plus seasons with the Warriors last week, how the junior is always looking to make that upward movement, whether it be during each individual season or from one year to the next.

Tangible proof of progress in a sport like wrestling can sometimes be difficult to grasp. In the rarest of cases do high school wrestlers, whose bodies are still maturing, stick to one weight class for the entirety of their four-year careers. Outgrowing one weight class might mean a new set of challenges at another, and the success a wrestler garnered at one weight one year might not translate to the next, even if that wrestler feels he’s developed into a better grappler.

That’s why Rudolph’s success as a sophomore during the 2018-19 season was so important.

Rudolph knew the work he’d put in after his freshman season, knew he was a better wrestler than the one who placed third in the Class 4 Northwestern District and Region 4C tournaments at 126 pounds and qualified for the Class 4 state tournament — but did not place — in his high school wrestling debut in 2017-18.

But it’s one thing to know you’re a better wrestler, and another to earn the hardware that validates it. Rudolph got that proof last season when he jumped up three weight classes to 145 and won district and regional titles and earned a medal with his fifth-place finish at the state tournament.

“It’s vital,” Rudolph said of last season’s progress. “I train all offseason, so I’m always training, and the worst feeling is to train all the time, know you’re training your hardest and then come up short and maybe not improve, not see improvement like that.

He followed that by going 45-11 with 20 pins at 145 last winter, sparked midseason by what head coach Brian Kibler called a career “turning point” in a dual with Millbrook last January. Rudolph edged fellow 2018 state qualifier Lukas Guerrero for a 4-3 victory in which he scored three points in the final 38 seconds of the bout, including the winning takedown with three seconds left.

“I think maybe that was the first time where two guys maybe were even and he beat that guy,” Kibler said. “... Once he did that, he wanted to do it again and again and again, and obviously that’s carried over this year where he wants to beat the better kids. And he knows he’s gonna have to beat those better kids to get to that next level.”

Rudolph has gotten to the point where his success is feeding on itself, and he prepared for his junior season by thinking back to the jump he made from his freshman and sophomore seasons, fueling himself with the urge to match — or exceed — that level of improvement this winter.

“I saw what I was doing was helping, so I’m wrestling all offseason, I’m going to camps, I’m seeing different coaches, getting different eyes to look at what I’m doing and maybe they can show me different things and change up my game,” said Rudolph, who spent the previous two seasons serving as the drill partner for Timmy Dieter, who won a state title for the Warriors last season.

“And I’m just constantly working all offseason, strength training as well and then trying to stay in shape and trying to keep a clean diet all year round. It all goes into that improvement that I see in-season. It’s hard in wrestling to get better but you just have to believe in what you do and you have to do it all the time. You can’t really slack.”

This season, Rudolph, who again is wrestling at 145 pounds, is 20-3 with 10 pins heading into today’s district tri-match at Kettle Run that also includes Fauquier. He recently joined the 100-win club with his pin in a dual with Millbrook on Jan. 2.

Staying true to the mindset that’s marked his career, Rudolph said he’s “nowhere near satisfied” with his junior season, which has included a loss to Brentsville’s Collin Brady — a three-time Class 3 state qualifier — in the Northwestern District Duals on Dec. 14 and two losses at the massive 49-team Trojan Wars tournament in Chambersburg, Pa. at the end of December.

Rudolph’s wins this winter have included a 7-2 decision over Warren County’s Dylan Becker — a three-time Class 3 state medalist — at the Northwestern District Duals and a 10-8 win over a Frankfort’s Noah Kiszka — a West Virginia state placewinner at 152 pounds last season — at the Hedgesville (W.Va.) Duals on Dec. 6.

“I’ve had some nice wins here and there,” Rudolph said. “I’ve won what I’m expected to and I’ve had some nice wins where they might have been toss-ups, but I want to obviously win all those matches that are toss-ups. I’m alright with my season so far. I’m definitely not satisfied and I hope to progress as the season goes on.”

When Rudolph is on top of his game and winning matches, he’s initiating the action and putting aside any doubts about whether or not he should be taking his shots at his opponent, he said.

“He’s aggressive, he’s firing off shots and he’s got a good open attack, a lot of good fakes and he’s popping off shots. That’s ultimately his thing,” Kibler said of what makes Rudolph click. “If he’s aggressive with the other kid and he’s on the offensive, that’s usually what you look for with him. He found that stride late, like in the postseason last year, and it carried him a long way.”

Kibler added that Rudolph is not a finished product, a sentiment that Rudolph certainly would agree with considering his constant quest to improve. Among the biggest areas Kibler and Sherando’s coaches want address with Rudolph is his defense, he said, and some situational things involving late-match scenarios.

“He keeps going through it with an open mind,” Kibler said. “Obviously that’s gonna be key, and the reason he does go through it with an open mind is because we still know he’s not there yet but I think he also knows he’s not there yet and he wants to be there. That’s something that I’ve said for a long time, we’ve got the pieces of the puzzle around here, laying around here if you’re willing to put them together, and he’s a sponge and willing to put in the work.”

If Rudolph has his way, all of that work heading into the season and done throughout the winter will culminate in his first state title in February. But the Class 4 state tournament is still a month away and Rudolph has other obstacles to tackle first. To prepare for a postseason run, he said, he’ll continue to drill hard in practice to ensure he’s got the endurance to pair with his technique.

“Obviously, I want to get better and better as we head toward states,” Rudolph said. “A pin’s a bonus if you can get it, but points, points, points, that’s kind of the mentality that I’m at right now.”

As far as the top competition Rudolph will face on the way to challenging for a state title, he and Kibler both mentioned Liberty senior Bryan Contreras, a three-time state qualifier who placed fourth at 132 pounds last season. Kibler added that 145-pounders from typical Class 4 powers like Great Bridge and Eastern View, who finished first and second at last year’s state tournament, likely could stand in Rudolph’s way, as well.

“I think we’re in the ballpark in that regard. It’s definitely something, if his goal’s set on it, then I wouldn’t think it’s impossible by any stretch of the imagination. We’re in the ballpark there. It’s just gonna be a lot of tight matches, maybe, along the way and finding a way to win those.”