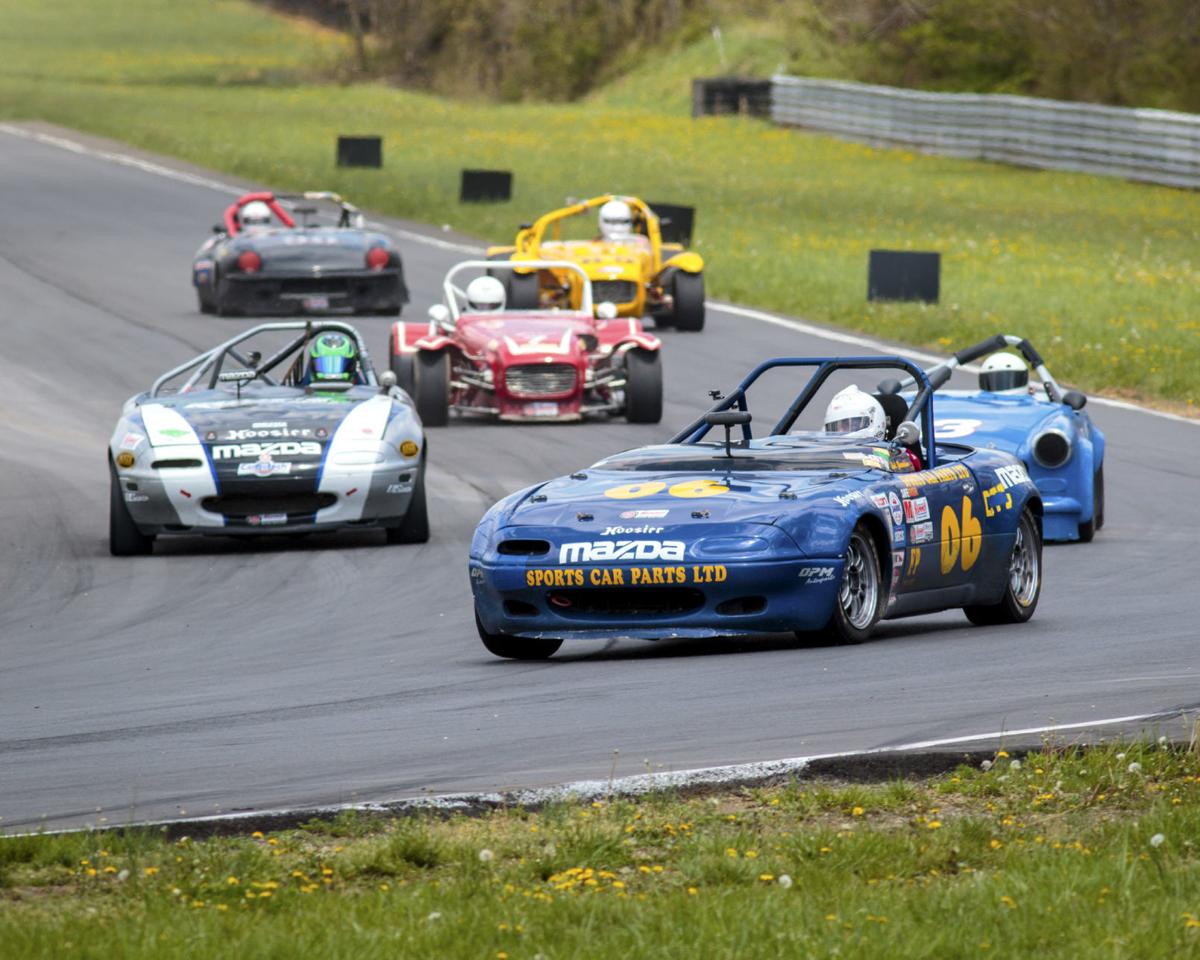 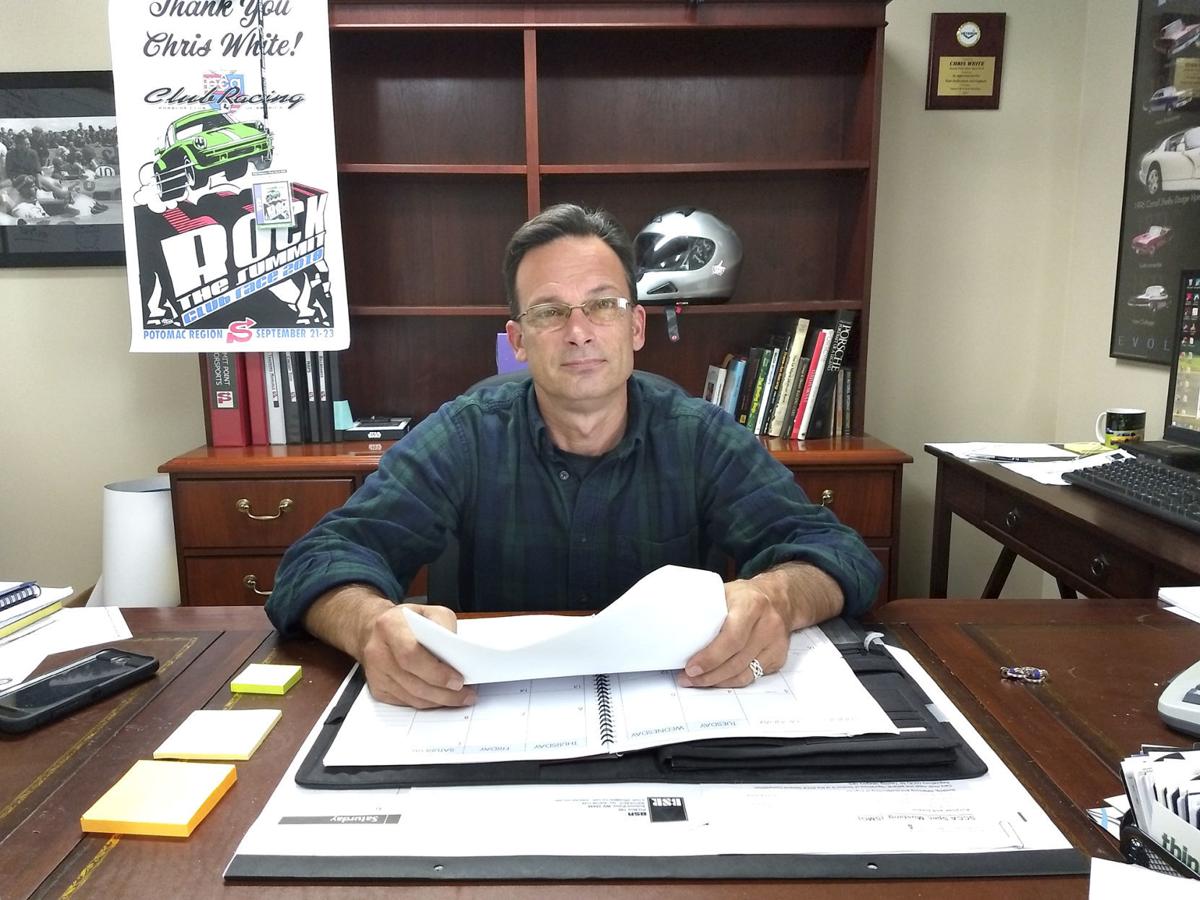 Chris White is the operations manager at Summit Point Motorsports Park. “I love it here,” said White. “It’s unique. It has a 50-year history. There is no other track like it in the Mid-Atlantic area.”

Chris White is the operations manager at Summit Point Motorsports Park. “I love it here,” said White. “It’s unique. It has a 50-year history. There is no other track like it in the Mid-Atlantic area.”

SUMMIT POINT, W.Va. — While living in Fairfax, Chris White stumbled upon Summit Point Motorsports Park on the internet and immediately enrolled in an introductory course for high-performance driving.

It was May 1998, and he was hooked. After taking several more courses, he became a volunteer high-performance instructor at the complex in 2005.

He is now motorsports director for the 800-acre facility in Summit Point, W.Va., which was sold three months ago to Xator Corporation, a Reston-based security solutions company.

“I was in the construction industry when [that industry] fell apart in 2009, but high-performance training was beginning to bloom,” said White, who became a full-time employee at the park that year and motorsports director in 2013.

“I love it here,” said White. “It’s unique. It has a 50-year history. There is no other track like it in the Mid-Atlantic area. It has a family-oriented feel, not corporate. Many of our employees have been here for decades.”

When Xator finalized the park’s purchase on July 31, “There were worries about motorsport events continuing,” White said. “They have shown a great interest in motorsports and have allowed me to expand our team.”

There are currently 100 full-time and 100 part-time employees at the facility, which was established in 1970, plus volunteers for certain events.

“There is a three-year plan to improve amenities like what you would expect at a race track but remembering what makes Summit Point unique from other race venues,” said White.

“Under Mrs. Scott, we saw a lot of improvements,” said White. “She strived to improve and bring in more clients. Since I have been here, we have tried to improve the safety of the facility.”

Those improvements were ongoing prior to a 2014 accident that killed an instructor who was a passenger when the amateur driver lost control around a curve and slammed into two nearby trees.

A major part of the improvement plan is looking at areas where people crash and providing more room so they can recover, said White.

“And in other areas we want to improve the barriers to protect the drivers,” he added.

“If you are into road racing and like an old-style track, there will never be another track like this one built today,” said Bill Stoler, 56, of Greencastle, Pa.

Stoler has been a mainstay at the track since 1998, taking photographs and occasionally writing stories about events.

“Fans can get up close (to the track) and can see and hear the cars,” said Stoler, who describes himself as the park’s unofficial official photographer. “I really love the place and want to see it survive.”

Hundreds of thousands of drivers have had behind-the-wheel adventures and/or training on one of the park’s three road-racing circuits used for amateur automobile, kart, motorcycle racing and high-performance driver education.

There are also four shooting ranges, a bomb range and a rally area.

Summit Point Circuit is the most popular track, booking 87 events this year, including every weekend during race season, followed by the Shenandoah Circuit (probably the most challenging, White said) with 25 events scheduled and the Jefferson Circuit with 17 events planned.

An exclusive training area on 400 acres in the park is leased by the U.S. Department of State and used for emergency training for federal and law enforcement and Foreign Service officers. But the State Department’s lease concludes at the end of 2019, after which it will relocate to a new facility it’s building.

The Frederick County Sheriff’s Office and Winchester Police Department have trained on the course.

“We have always enjoyed going over there,” said Sheriff Lenny Millholland. “It is a top-quality place for training, and they are nice people to deal with. I am hoping we will be able to continue going there.”

“We are actually seeking other agencies to fill the void when (the State Department) leaves,” said White, adding, “Any government alphabet agency you can think of has been here at some point or another.”

“We love Summit Point,” said Michael Kaunitz, 54, who lives nearby and is a driver and club instructor with the Porsche Club of America.

“I have driven thousands of laps there over the past five years,” said Kaunitz, who owns a 1999 Porsche Carrera and works in sales for an internet company.

“It’s a regional track where they are making advancements and have begun thinking of racing as an industry there. The experience improves every year,” he said.

Bill Scott was a proponent of club-level events for the car owner who doesn’t have deep pockets, White said.

That philosophy continues at Summit Point.

Wayne Armbrust, SCCA region executive for the Washington, D.C.-area, heads a club of 500 members that typically holds 10 events a year at the park.

“It is truly a phenomenal circuit to run cars with different activities,” said Armbrust, 69, a retired electrical engineer from Bowie, MD., who has driven his Mazda, Mustang, Porsche and Jeep on the facility’s tracks.

“We use all three tracks for different types of racing, a buffet of events,” Armburst said, with as many as 200 cars at times.

“It is our home track,” he said. “It feels like more like a partnership relationship (with the park) than a customer relationship.”

He noted there are charity events with an entry fee of $20, track experiences for $120 with an instructor riding with the driver for a weekend, and races with entry fees that can range from $300 to $400.

The challenge and adrenaline of racing can be addictive, even for those who run the park.

“I have been passionate about motorsports all my life,” White said. “My mother said the first word I said was ‘car.’”

White’s passion reached a new pinnacle earlier this year when he won first place in two races, one with his Spec Racer Ford (SRF3) in October and in September with his street level 1994 Miata.

“The only races I have won are here at Summit Point,” White said with a laugh. “It may be why it is my favorite track.”

As a neighbor of the Summit Point Raceway we are so happy to see the State Department leave. The track has explosions and machine guns all day! Very loud and shakes our house. They also have a "Ram Site" where they crash cars less than 400 feet from the back of our property. Not only that they come behind my house less than 50 feet away from the back of my house dressed in mask carrying machine guns. Our grand kids now wont come over now due to this. Here we live in the USA but it seems like we live outside of Iraq. Before long you won't be able to live in Summit Point, WV.!