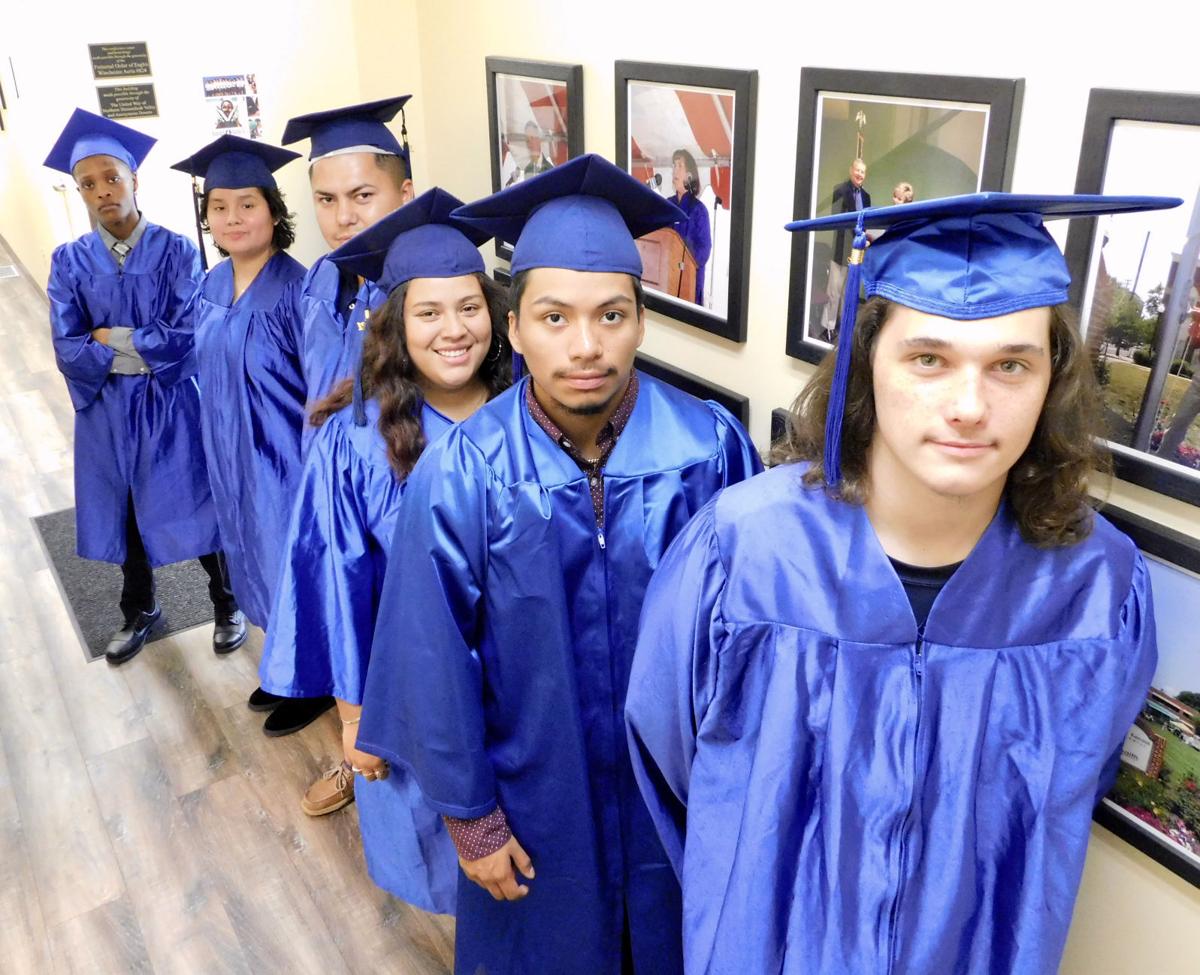 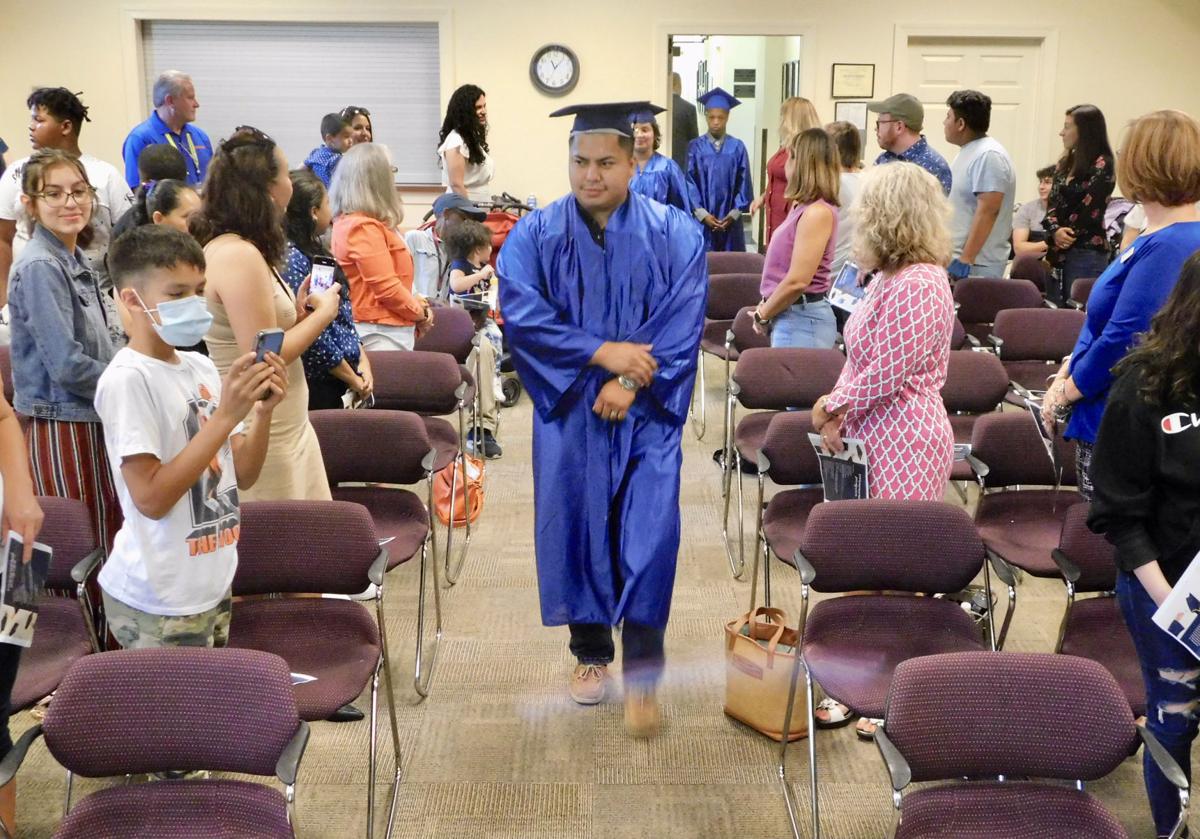 Raul Jimenez (center) files past family, friends and supporters as he walks to the front of the Eagles Boardroom in the Our Health complex at the start of Friday morning’s commencement ceremony for the first Building Maintenance Technician Program offered by Virginia Career Works in partnership with Lord Fairfax Community College’s Workforce Solutions. 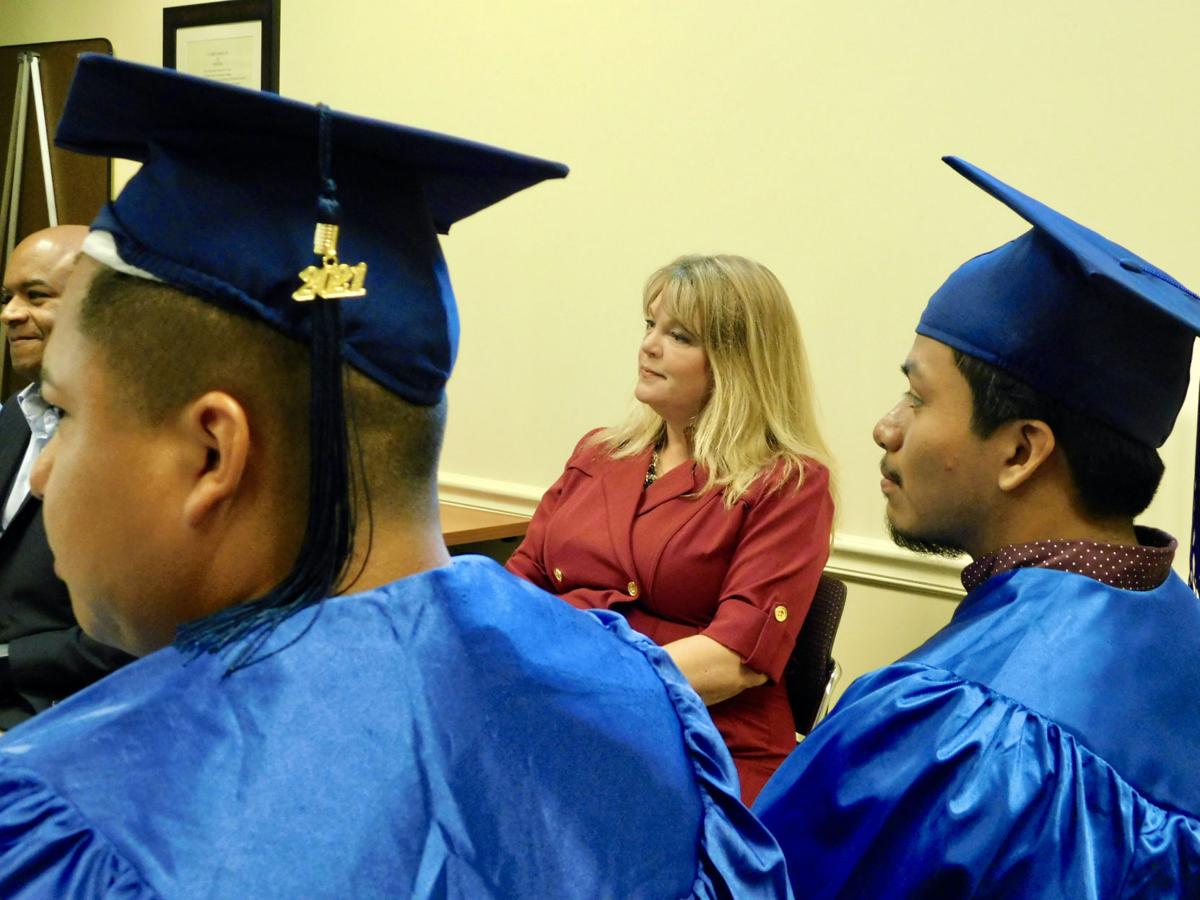 Raul Jimenez (center) files past family, friends and supporters as he walks to the front of the Eagles Boardroom in the Our Health complex at the start of Friday morning’s commencement ceremony for the first Building Maintenance Technician Program offered by Virginia Career Works in partnership with Lord Fairfax Community College’s Workforce Solutions.

WINCHESTER — Kenia Guevara was 2 years old when her family emigrated to the United States from El Salvador. Growing up in Frederick County, she was subjected to racial slurs, told she would never amount to anything and told to go back to her native country.

But the 2020 Millbrook High School graduate wasn’t deterred by the haters. She used their negativity to fuel her dream of someday starting her own business and building a home.

“It made me work harder to become what I am now,” Guevara said.

On Friday morning, the 20-year-old took the first step toward turning her dream into reality by being one of six graduates from Virginia Career Works‘ first Building Maintenance Technician Program. Even before she stepped to the front of the Eagles Boardroom in the Our Health complex to accept her commencement certificate, Guevara, just like her five classmates, had already been offered a good-paying job utilizing the skills she learned from the six-week course.

Virginia Career Works is a Richmond-based employment-assistance agency with a Winchester office located at 419 N. Cameron St., on the Our Health campus.

The program got rolling after the owner of two major apartment complexes in the Winchester area spent 18 months looking to hire someone to do building maintenance at his properties but couldn’t find a qualified employee. He eventually shared his plight with Zampino’s office.

“I said, ‘I think we can do something,’” Zampino said on Friday.

In cooperation with Workforce Solutions at Lord Fairfax Community College (LFCC) in Middletown, Faithworks Inc. in Winchester and Outlier Realty Capital in Bethesda, Maryland, Virginia Career Works tapped into federal funding to develop a hybrid training program where local students who faced financial or cultural roadblocks learned in a classroom two days a week and trained in the field for the other three. The students were paid by Virginia Career Works while working at Pine Plaza, Winchester House and on the Our Health Campus, and Virginia Career Works made sure to locate the classroom next to a WinTran bus stop in Winchester in order to accommodate any of the trainees who did not have their own transportation.

“It’s hard to make your way to LFCC if you don’t drive,” Zampino said.

The six-week course didn’t earn them industry certifications for skills such as carpentry and plumbing, but it taught them more than enough to become highly qualified candidates for jobs like maintenance supervisor at an apartment complex. Zampino said there aren’t many people with that skill set in Winchester, which was evidenced by the fact that all six graduates had already been offered jobs by local employers prior to Friday morning’s graduation ceremony.

“One is starting work on Monday,” Zampino said.

“You are the poster children of what resiliency is all about,” Smith told the six graduates, who were wearing caps and gowns provided by LFCC. “You need mentorship? Call me, email me. Don’t ever, ever, ever, ever walk away.”

Congratulations to the graduates, their families, and their teachers!!