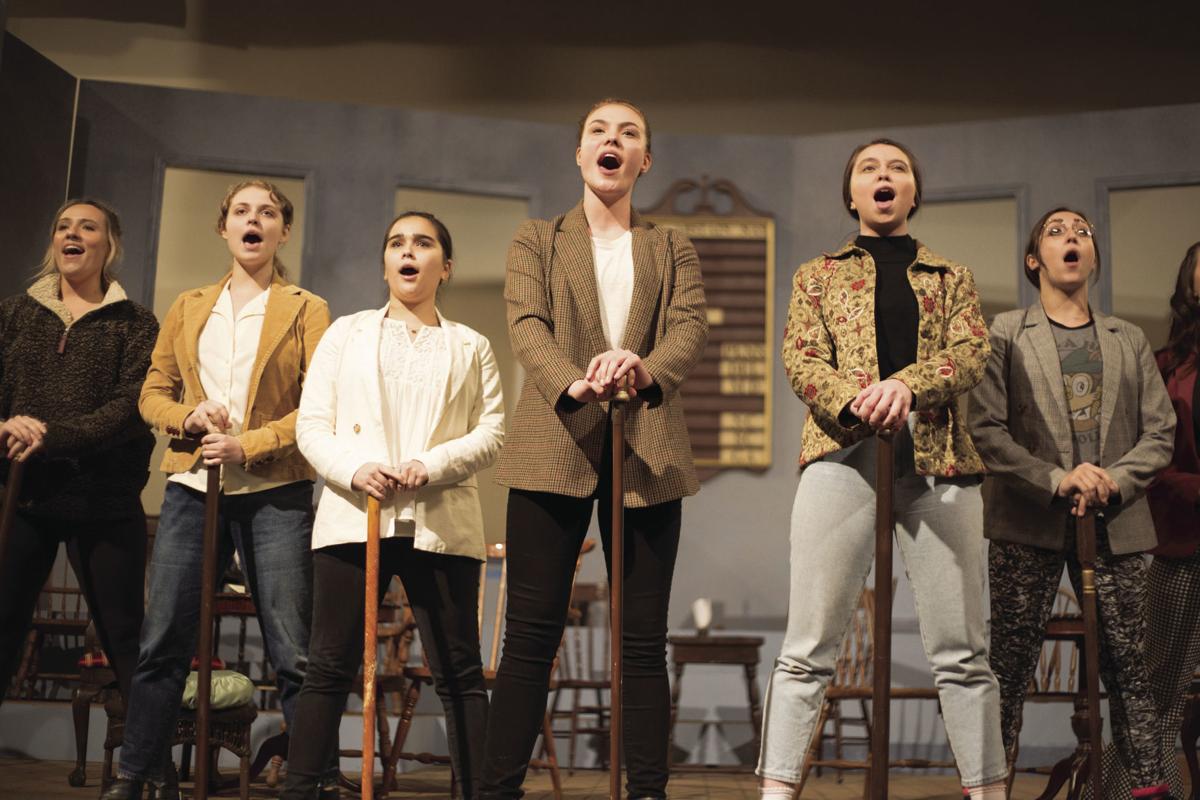 Shenandoah Conservatory students rehearse for the all-female version of “1776,” which opens at Ohrstrom-Bryant Theatre on Thursday. 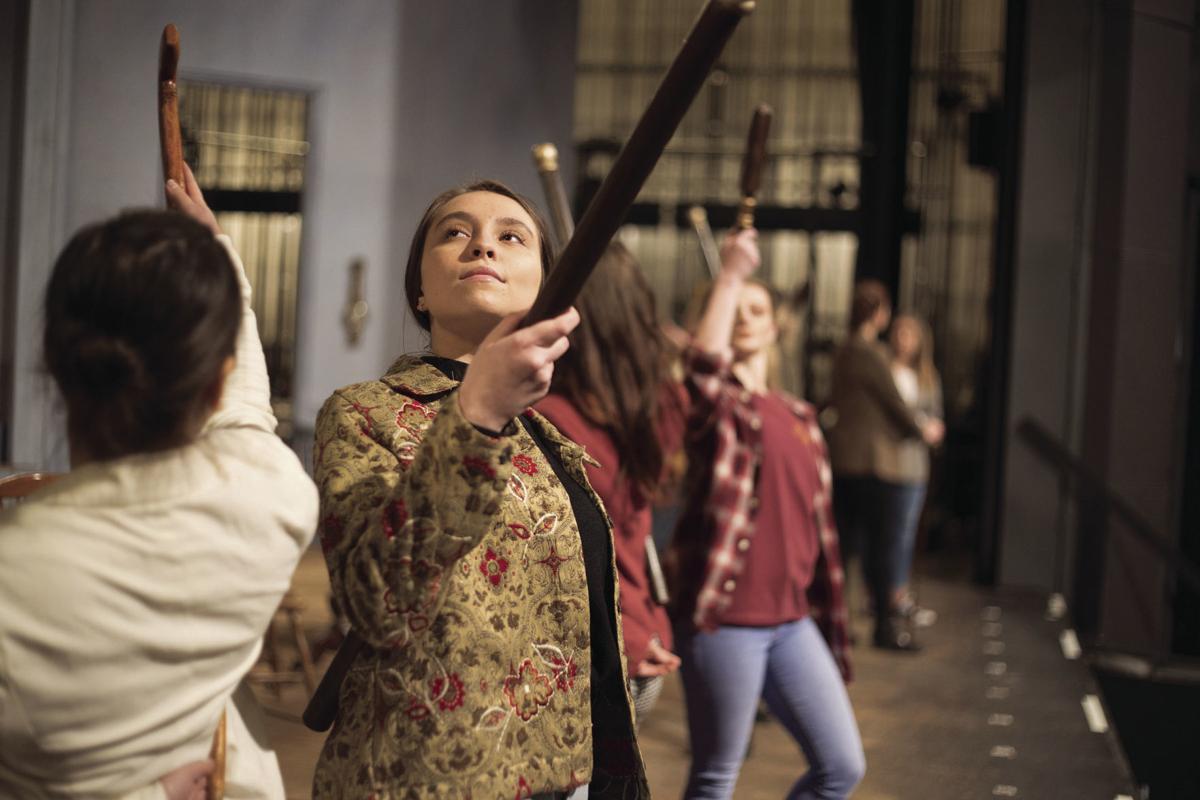 Conservatory students rehearse for "1776," which runs Feb. 20 - 23 at Ohrstrom-Bryant Theatre. 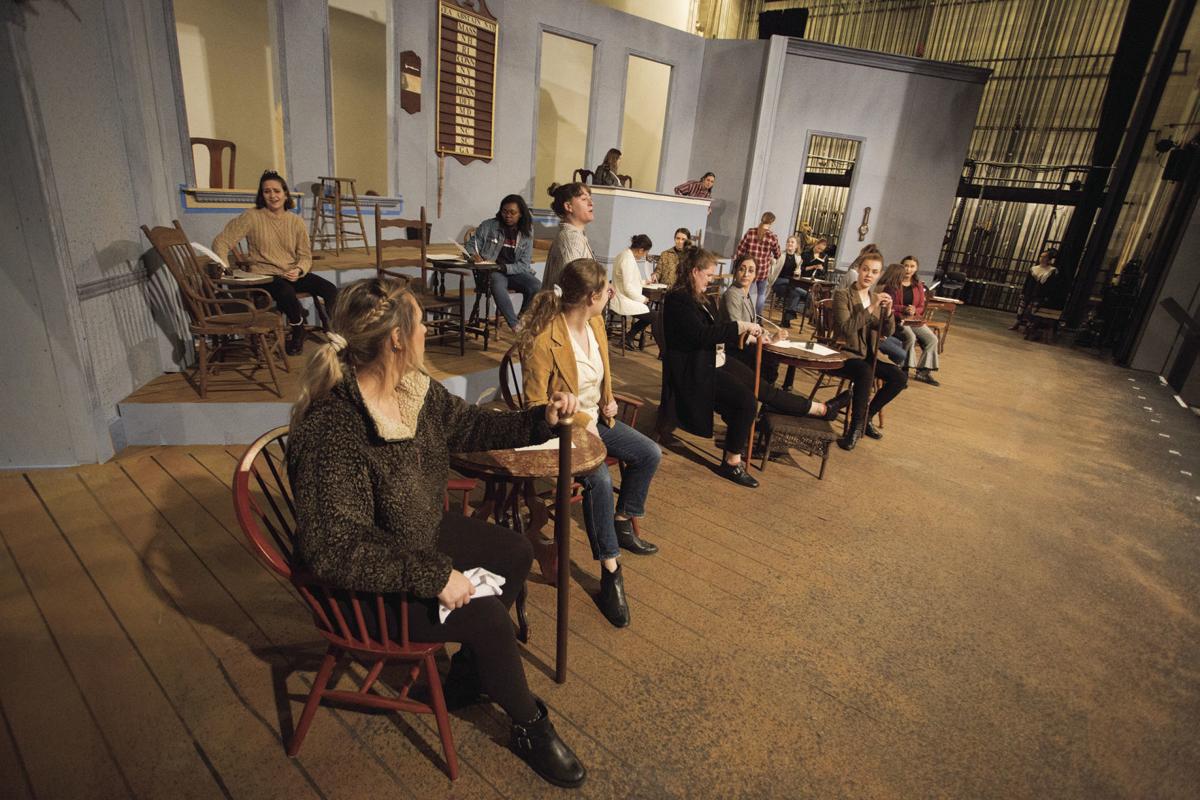 Shenandoah Conservatory students rehearse for the all-female version of “1776,” which opens at Ohrstrom-Bryant Theatre on Thursday.

Conservatory students rehearse for "1776," which runs Feb. 20 - 23 at Ohrstrom-Bryant Theatre.

WINCHESTER — What would a Continental Congress of 2020 look like?

That was a question Kevin Covert, Shenandoah Conservatory’s director of musical theatre, pondered last fall as he considered how to cast the conservatory’s production of “1776,” which opens Thursday.

“When we were casting for our fall shows, which were ‘Something Rotten,’ ‘Macbeth,’ and ‘Parade,’ we noticed we had very male-heavy shows. I said what about the idea of doing it with all women? And it sort of took hold,” Covert said.

“It’s interesting because we did our first run-through last Friday, and two or three minutes in, I completely forgot — it was just actors playing roles. It’s interesting to see their take on it, how they are approaching it.”

The musical, with music and lyrics by Sherman Edwards and book by Peter Stone, is based on the events leading up to the signing of the Declaration of Independence. The story focuses on John Adams’ efforts to persuade his colleagues to vote for American independence by signing the document. It opened on Broadway in 1969, and won three Tony Awards, including Best Musical. It was revived on Broadway in 1997, and is set for a 2021 revival — also featuring a cast of all women, which was announced only weeks after Covert and his team made the decision on an all-female cast.

While the casting may be untraditional, Covert said the musical remains traditional to how it was written. Music Director Patrick Brady said the only other change was the orchestration, which was adapted to fit the female performers’ vocal ranges.

One challenge was to teach modern-day students the formality of posture and carriage that people of that period possessed.

“Men would sit on the end of their chair, and would not cross their legs in certain ways. They (students) pulled themselves up, they’re wearing coats, they stand a little taller, gives them a little more formality which was appropriate to the period,” said Brady.

“In 2020, we stand and sit very differently than people did back then. So getting them to get that in their bodies, to live in that world. They really are rising to the occasion beautifully,” he said.

While the production may lack the big flashy dance numbers common of other musicals, it instead relies on clever staging and catchy music.

“It’s insanely tuneful. You can hear the melodies and hum them immediately. The songs are funny, they’re witty, they’re a true extension of the book. They flow naturally, some of them are almost talk-singing songs. But then there are near opera-ish proportions with Abigail Adams, there’s a beautiful waltz. It runs the gamut, but it is classical, it’s a classical orchestra,” Brady said.

The musical takes place in mostly one location, Independence Hall in Philadelphia, with some scenes on the street outside.

“The designer looked at old photos of Independence Hall, and we tried to be true to the feeling of what that would be. It’s hot, it’s tight, it’s crowded,” said Covert.

Brady explained that even though it was the middle of summer, members of the Continental Congress could not open the windows due to security concerns.

“It’s an oven in there for these people, the windows are kept closed for flies, but even more importantly there were British spies, and because the Congress was right on the street level, people could have just passed by and hear what was going on,” he said.

With today’s political discord, “1776” is a patriotic reminder that our nation was built on the art of compromise and working together for a common goal.

“In this play, you really see Congress talking to each other and debating and compromising, and there’s a major compromise in the second act — but it’s so much different than today’s Congress which doesn’t listen to each other. I find it very inspiring that John Adams with his words, and Benjamin Franklin and Thomas Jefferson, that words can change people’s minds,” said Brady.

“Some things are just timeless. Issues of people’s rights, slavery is a big thing that comes up in Act II, things we are still talking about today, oppression... It’s about going across the aisle to get what you need, which you don’t see happen much anymore,” said Covert.

“When we get to the end of the show — spoiler alert, they end up signing the Declaration — there are moments when I sit in the audience and I am just like, oh my, this could have been so different. Our country could have been so different. I look at the things that are happening now, and the things these men were fighting for, and wonder what they would think nowadays. It’s a nice reminder of the principles our country was founded on.”

Tickets for “1776” have been moving fast — Feb. 23’s performance is already sold out, and Feb. 22’s is nearly sold out – but tickets remain for Thursday and Friday’s performances. You can purchase tickets online at www.conservatoryperforms.org or call the Box Office at 540-665-4569.

So shocking that Euro american men frustrates liberals that they have to fantasise anything but. Laughably there would be no modern 1776. Look at the democrat party today. Too many diverging interests. Euro Americans should be proud that the greatest constitution ever came from them. For if the constitution in and of itself is why our nation is great why doesnt the world adopt it and become great? Or its the people that animated it. CHeers