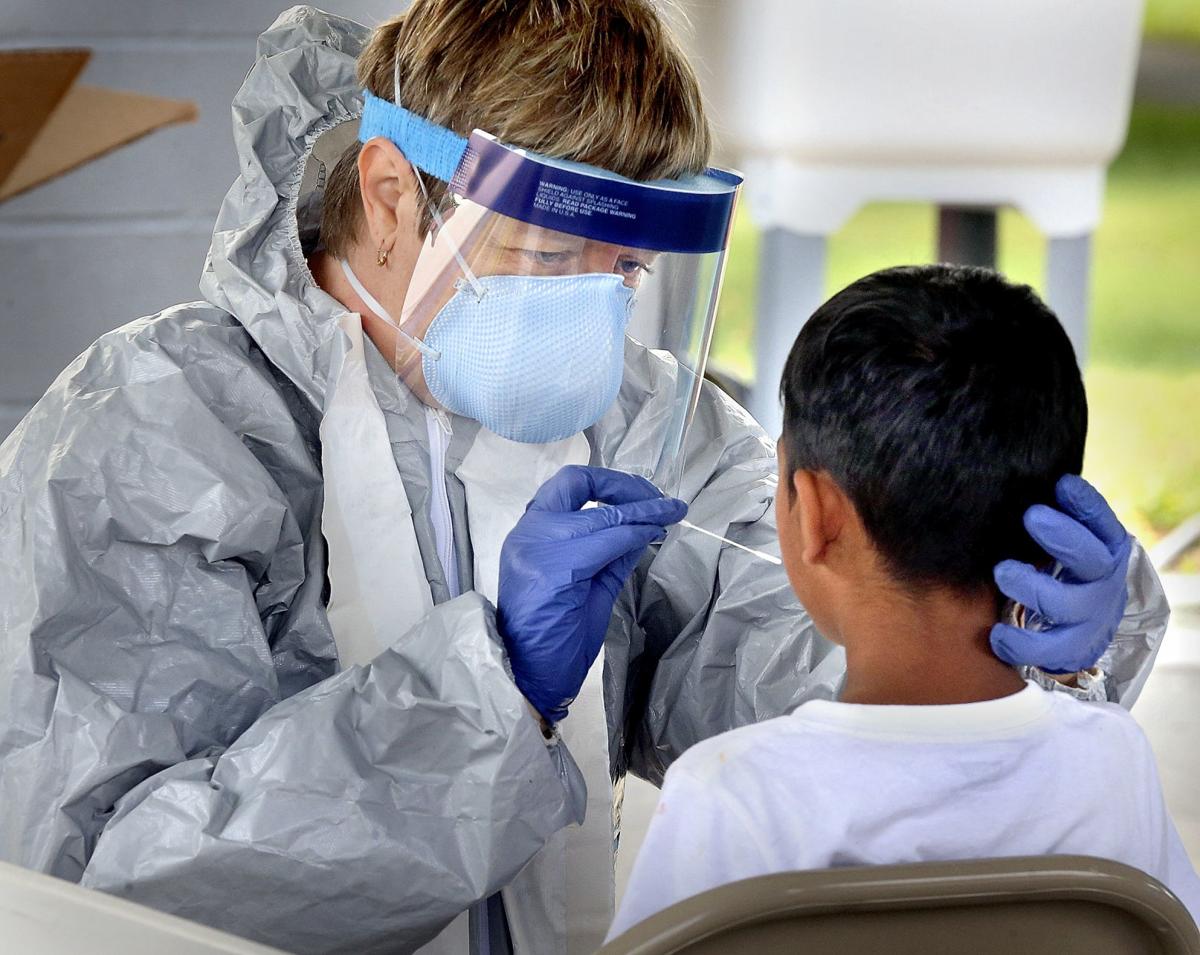 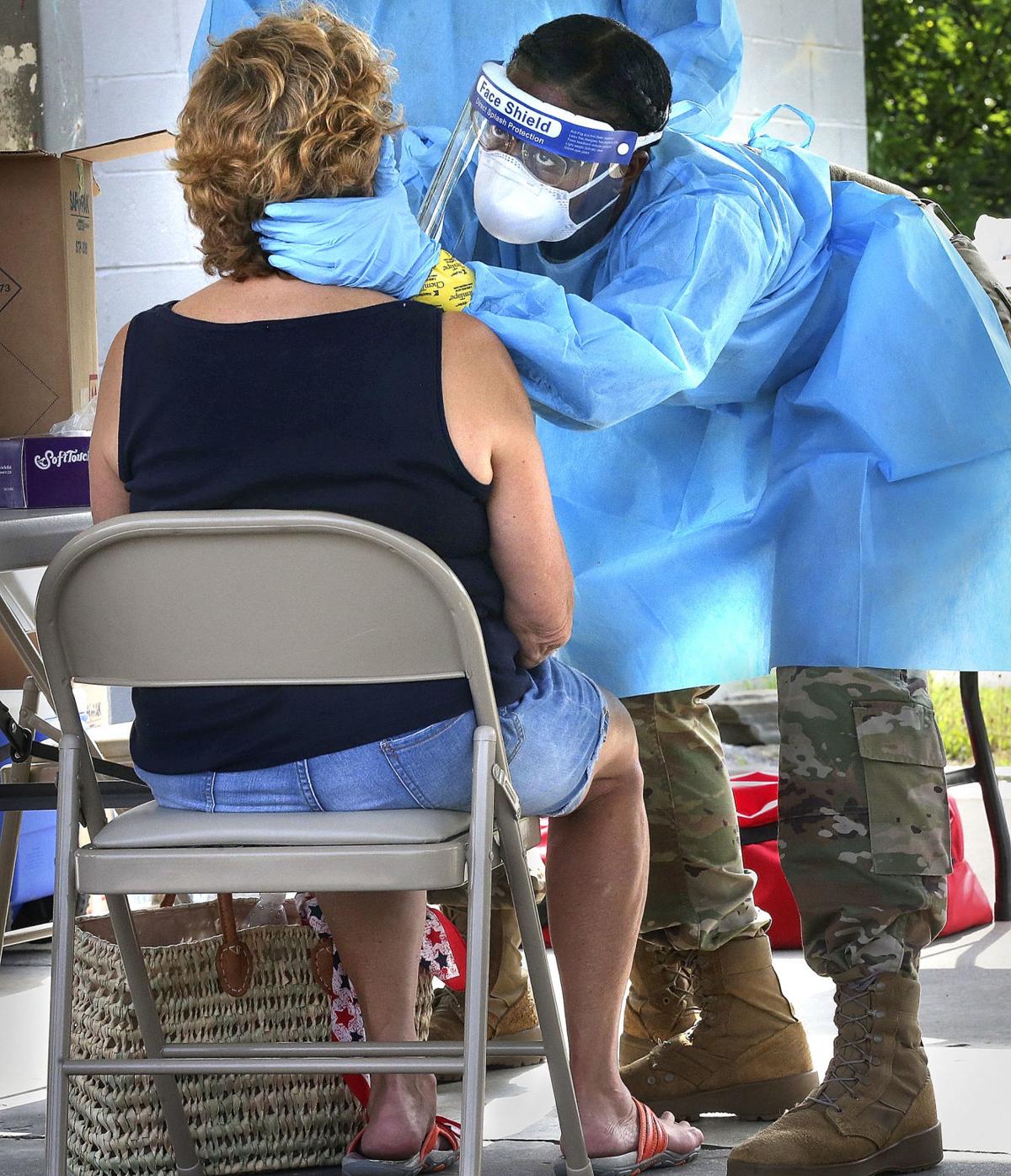 WINCHESTER — For people who took advantage of free, walk-up coronavirus testing on Tuesday at Frederick Douglass Park, it was a chance for peace of mind during a pandemic that has killed more than 130,000 Americans in just over four months.

Among those tested was a 37-year-old woman who said she has been quarantining with her 70-year-old mother, who tested positive for the virus about three weeks ago. The woman, who The Winchester Star isn’t identifying to protect her medical privacy, said she appreciated testing being offered at the park, which isn’t far from her home.

Registration and testing took about 10 minutes. On hand to help administer tests were about a dozen members of the Virginia Army National Guard 34th Civil Support Team, whose members wore masks, smocks and face shields. The team previously did testing in Buena Vista and Verona, according to 1st Sgt. Jeff Brown.

Dr. Colin M. Greene, director of the Lord Fairfax Health District, which oversaw the testing, said people who test positive for COVID-19 will be notified first, and they should receive notification within 48 hours of the tests being given.

Experts say testing is key to containing the virus. In some COVID-19 hotspots, lines for testing have been long.

But turnout was relatively light at the park on Tuesday. While up to 150 people could’ve been tested, just 97 showed up.

Those tested included an older couple who returned July 1 from visiting their daughter in Myrtle Beach, South Carolina, a COVID-19 hotspot. Many people who have visited the popular tourist destination have returned home infected, including at least 100 Loudoun County teenagers, according to the New York Times.

The virus had killed 1,881 Virginians through Monday, including 74 in the Lord Fairfax Health District, which encompasses Winchester and Clarke, Frederick, Page, Shenandoah and Warren counties. Yet many local people aren’t wearing masks in public or socially distancing, said the 76-year-old woman who came to be tested with her 82-year-old husband. “They’re just prolonging us getting back to normal,” she said.

A couple in their 70s also came to get tested.

“When these opportunities [for testing] come around, you should take advantage of them,” said the wife, 72. “It’s nothing to play with. It’s serious business.”

Older people, minorities and people with pre-existing medical conditions have been especially hit hard by the virus.

Free testing for up to 150 people will continue today from 9 a.m. to noon at Quarles Elementary School at 1310 S. Loudoun St. Testing is on a first-come, first-served basis. People who come to be tested are asked to wear masks.

Obviously the less people infected the better and the longer it is until people get Covid allows more time for a vaccine. Keep wearing your masks! Social distance!

Testing and contact tracing DOES work and is not some mythical silver bullet. However, it doesn't do a whole lot of good if everyone ignores health guidelines that minimize the spread. There is a reason why states that closed down late and opened early (Opposing this administration's own rather flacid guidelines even) are the ones that are facing the brunt of the pandemic at this time.

"Delay the inevitable"? Did it occur to you that "Delay" and buying time is EXACTLY what we need in order to bridge the gap between now and a time where effective treatments and a potential vaccine can be developed? A shutdown is obviously not meant as a permanent solution, but it was ineffective in the United States because it was partial at best and our entitled citizenry determined they were done before guidelines were met.

Testing has been made into some kind of silver bullet. It's not and accomplishes very little. The best thing all of us can do is live normally and allow herd immunity to take care of the virus. It should be clear by now that all the shutdown did was delay the inevitable. In fact, the ONLY reason stated for it was to "flatten the curve", i.e., to spread it out. Somehow, people got the false idea from the media that the shutdown was going to stop the virus. False. The Swedish model is what we should have followed instead of the Chinese model.

Well the Swedish Model is apparently being followed in Arizona, Texas, and Florida; I am sure you know that the curve is not only not flattened in Arizona, the hospitals are beyond capacity and there's no room for everyone needing care. Good job! Masks, tests, and isolation of infections....that would have been swell, don't you agree "Dr" Scott.? No, I didn't think so.