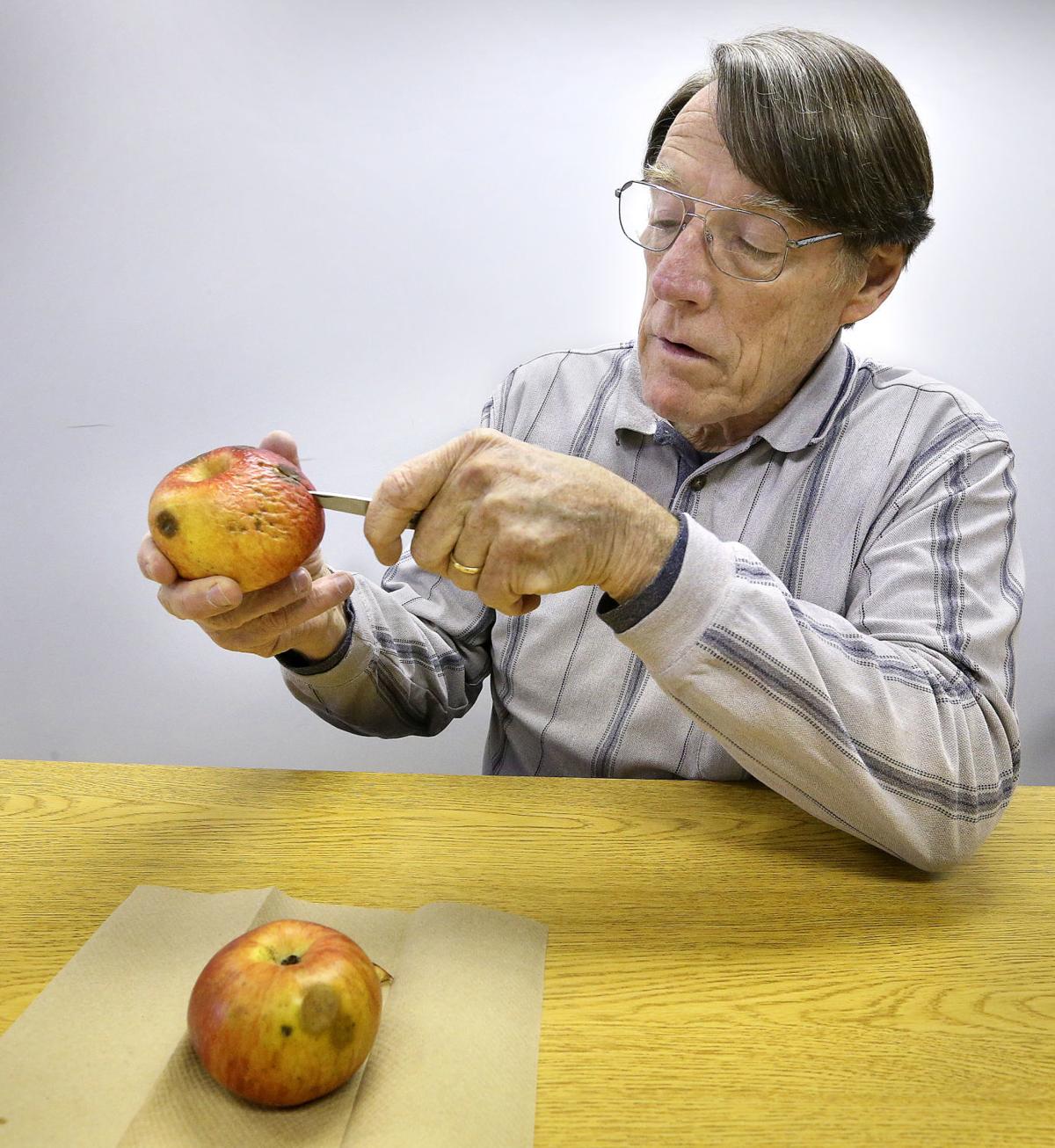 Keith Yoder is shown with apples that have bitter rot — a fungal infection. 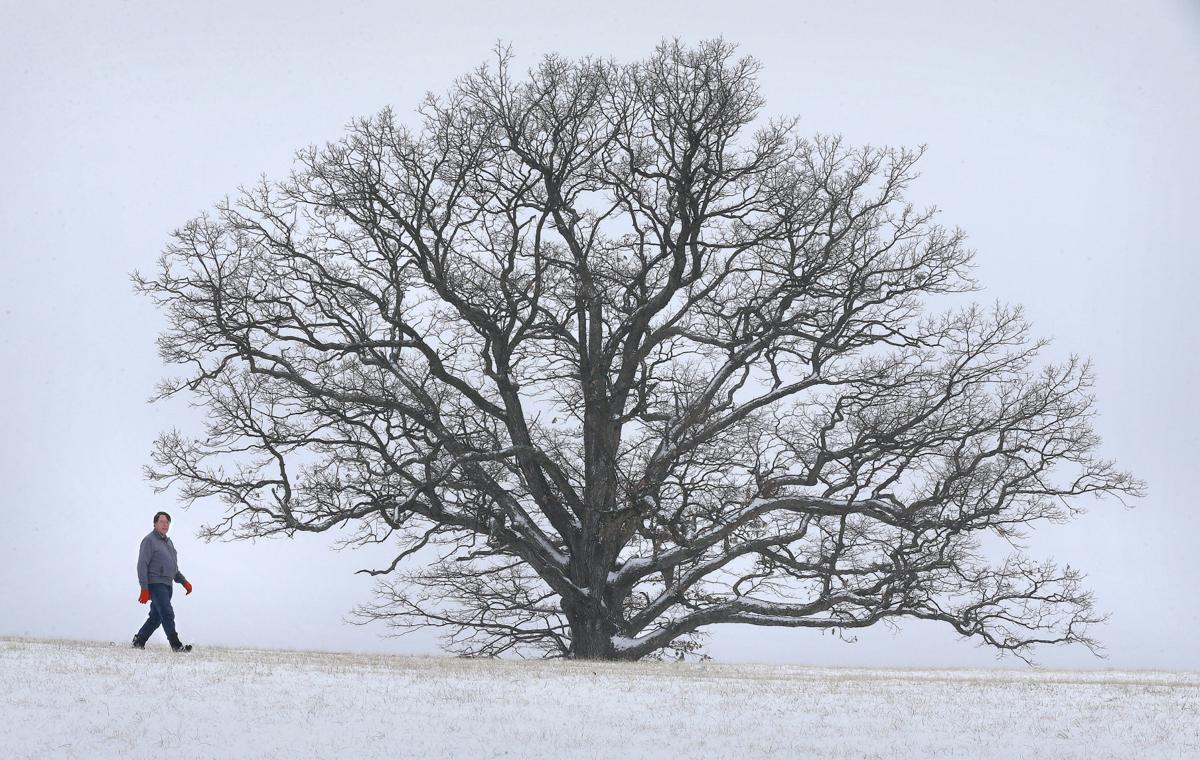 Keith Yoder walks beneath a white oak tree that is more than 100 years-old at the Alson H. Smith Agricultural Research and Extension Center in Frederick County on Friday. Yoder retired Jan. 1 after 42 years at the research center. 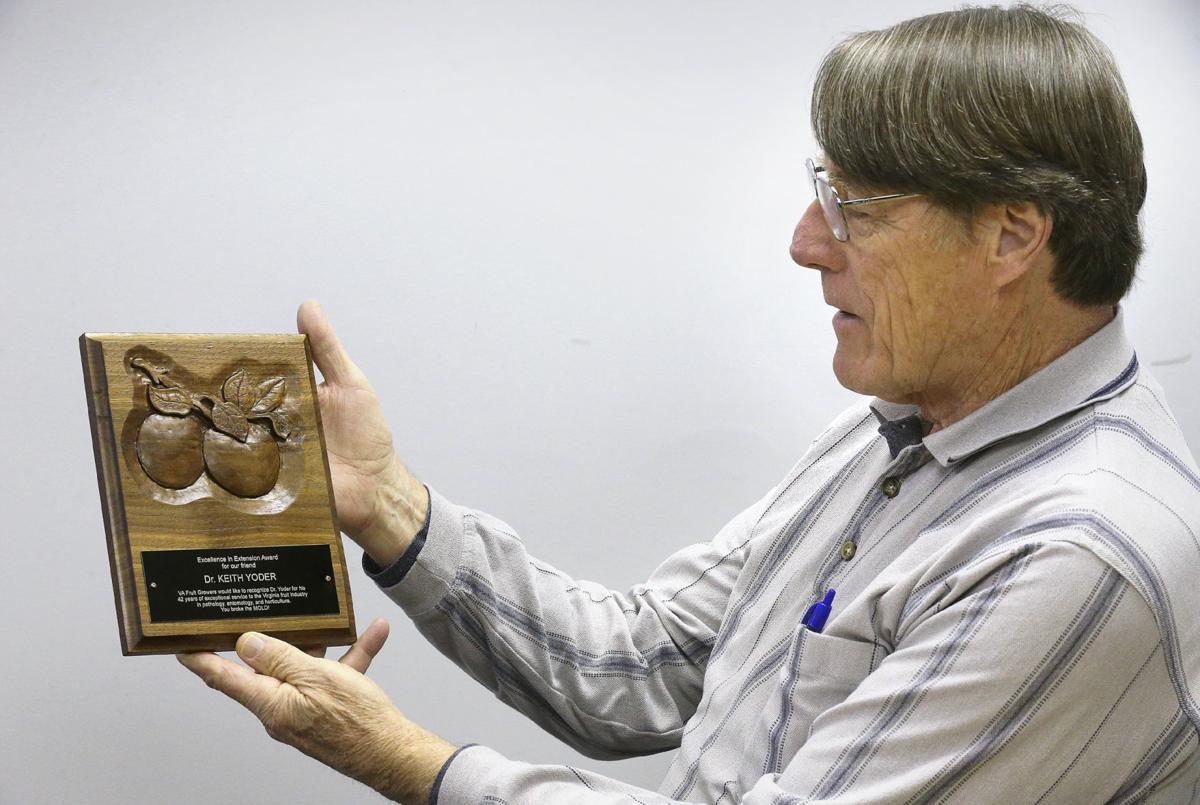 Keith Yoder holds the Excellence in Extension Award presented to him by the Virginia Fruit Growers. 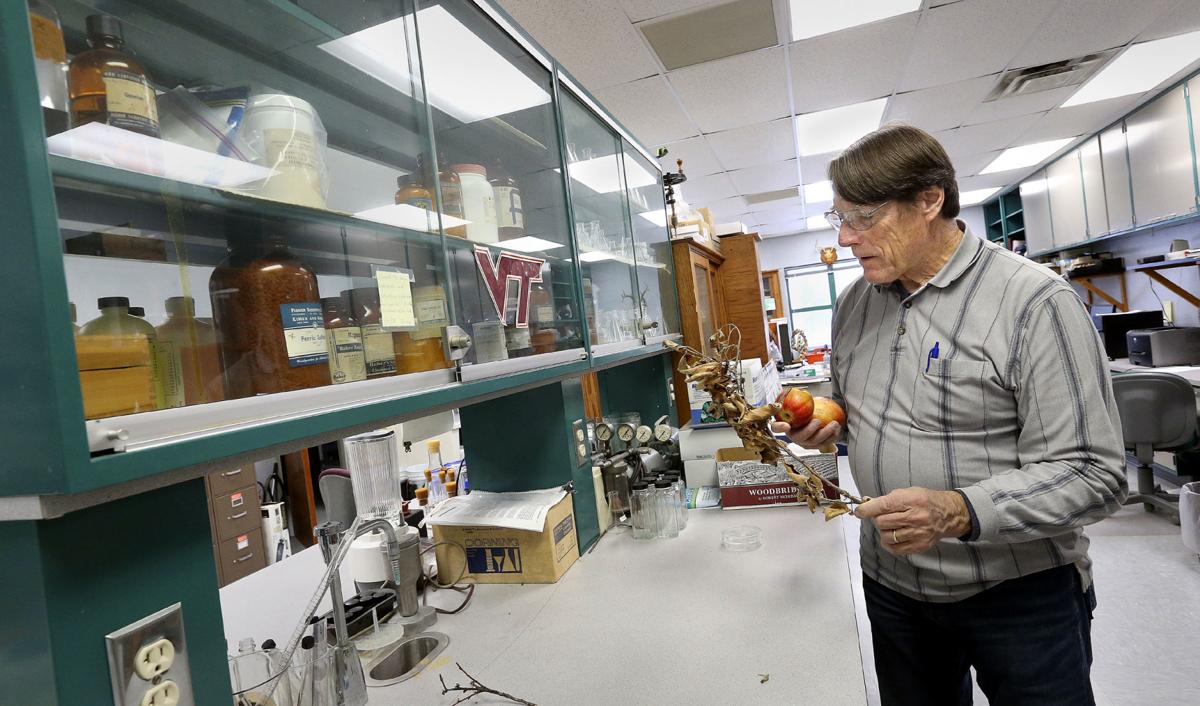 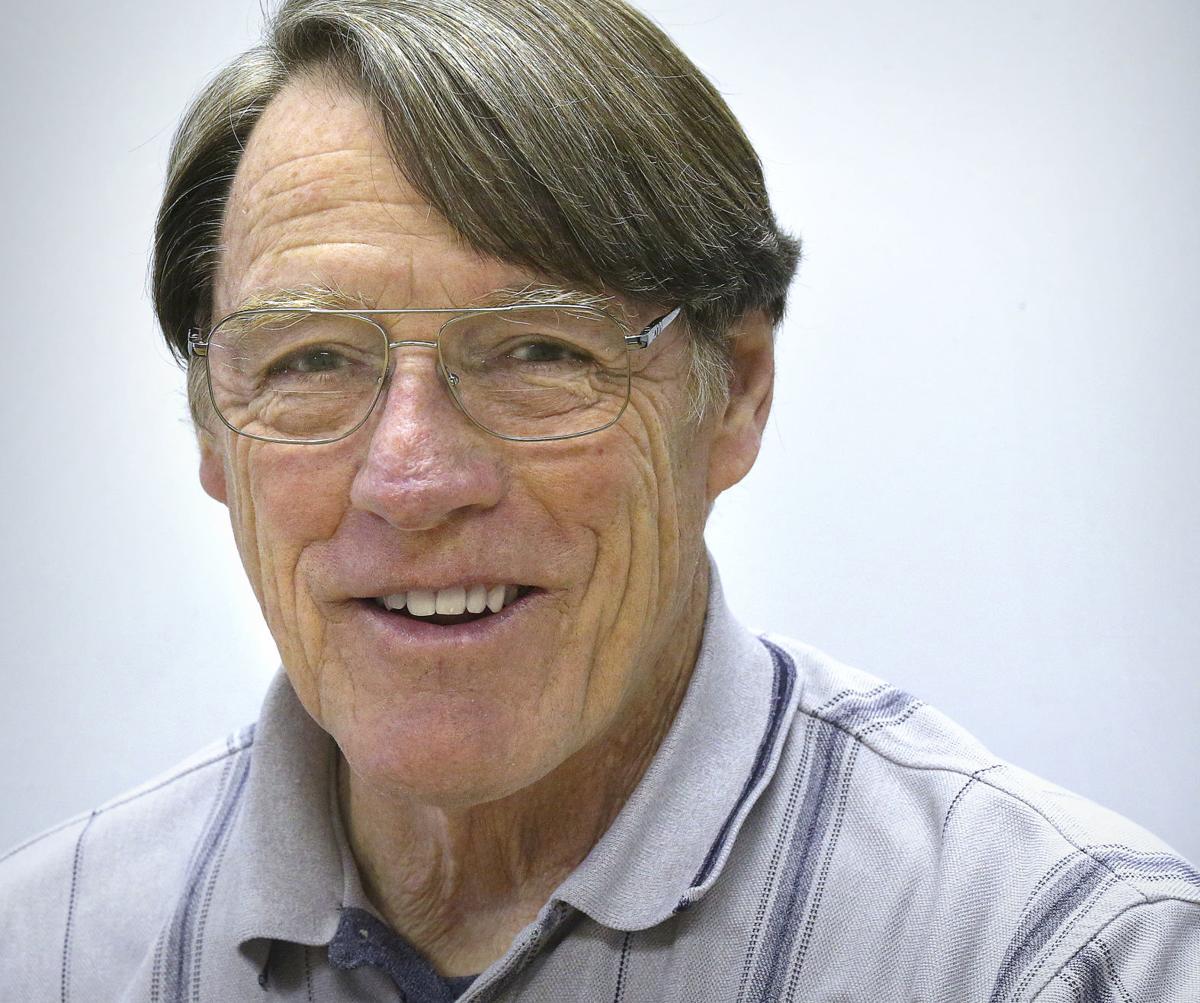 Keith Yoder is shown with apples that have bitter rot — a fungal infection.

Keith Yoder walks beneath a white oak tree that is more than 100 years-old at the Alson H. Smith Agricultural Research and Extension Center in Frederick County on Friday. Yoder retired Jan. 1 after 42 years at the research center.

Keith Yoder holds the Excellence in Extension Award presented to him by the Virginia Fruit Growers.

Yoder, 72, retired Jan. 1 after 42 years. He began his career on Nov. 15, 1976, at the Winchester Fruit Laboratory on Valley Avenue, which relocated in 1994 to Laurel Grove Road and was renamed the Alson H. Smith Jr. Agricultural Research and Extension Center.

Throughout his career, Yoder specialized in tree fruit disease management, with most of his efforts directed toward apples.

Virginia is currently the nation’s sixth largest producer of apples, and the Frederick County area is the largest apple-producing region in the state.

Fifteen or more diseases in Virginia can reduce an apple tree’s yield, the quality of apples the tree produces and how long the tree lives. Most of the Mid-Atlantic is challenged by these diseases, Yoder said, including apple scab, fruit rots, sooty blotch and fly speck, powdery mildew, fire blight and moldy core. The diseases can be bacterial, fungal or viral.

For decades, Yoder researched and sought ways to control these diseases, often testing various methods on apple trees and other plants at the research center in Frederick County.

Tony Wolf, a Virginia Tech professor of viticulture and director of the Virginia Tech-run research center, said Yoder was an early mentor to him.

“As a pathologist, I really looked up to him for some of the pathology work I got into with vineyards,” said Wolf, who started working at the Winchester Fruit Laboratory in 1986.

Much of Yoder’s research focused on combating fire blight, a contagious and destructive bacterial disease that attacks apples, pears and several species within the Rosaceae plant family.

The disease causes plant tissues to shrivel and turn black. Wolf said Yoder’s research discovered how plant growth regulators could be used to slow down the growth of fire blight.

Yoder also researched various strains of fungal pathogens to determine which ones had developed a resistance to fungicides.

His research allowed him to determine what kinds of fungicides are effective in combating fungal diseases and communicate that information to fruit growers.

“Because as you can imagine, if the growers are going to be spending a lot of money on fungicide, they want to have something that works,” Wolf said.

He added that Yoder played a large role in educating local apple growers on how much fungicide to spray and what brands to select.

“We are going to miss that expertise,” Marker said. “He has done a tremendous job. He was very dedicated to the job, and he’s going to be very hard to replace.”

Yoder’s passion for horticulture began when he was a child growing up in western Maryland. He received his doctorate and master’s of science in plant pathology from Michigan State University. He earned his bachelor’s degree in biology from Goshen College in 1968.

He became interested in plant pathology after hearing about the devastation caused by chestnut blight disease, which in the early 1900s caused a rapid die-off of chestnut trees. In college, he became intrigued by the disease cycle of cedar-apple rust, which requires both the apple tree and the eastern red cedar to complete its life cycle. This, along with an interest in crop production, pushed him in the direction of becoming a tree pathologist.

Over the course of his career, Yoder said he enjoyed that there were always new things to learn. He also liked traveling across the state and to other areas of the country to see how fruit production is handled.

One of his most significant accomplishments was guiding a research project that developed the Virginia Tech Pollen Tube Growth Model for apple blossom thinning, a process in which blossoms are removed. Many apple trees, left on their own, will bloom and bear apples in alternate years. By thinning the bloom, the alternate-year cycle is interrupted and more room is made for apples to grow. In apple production, blossom thinning during bloom produces the largest fruit and increases the chance of having an annual crop.

“The problem is apple trees in a typical blooming year may have from 10 to 100 times the amount of blossoms they really should have to support a nice crop,” Yoder said. “If too many of the blossoms set, the fruit will be small and the load will be heavy and maybe break branches.”

Blooms are thinned by a spray of lime sulfur. Previously, the timing for when to apply the spray had been subjective. Yoder’s Pollen Tube Growth Model fine-tuned the procedure so that apple growers could more precisely thin their blossoms and more accurately predict when the flowers will be fertilized.

The process starts when the last flower that a grower needs to achieve the desired crop has been pollinated. The first thinning spray is applied after the flower has been fertilized.

The model determines when thinning sprays need to be applied based on how long it takes the pollen tube to grow between pollination and fertilization.

It took nearly 15 years for the research team at Virginia Tech to develop the Pollen Tube Growth Model. The project started in 2003, under the leadership of horticulturalist Ross Byers. Yoder started working on the project in 2005, and the model was developed in 2018.

“Keith has been a huge benefit to the apple industry,” Glaize said. “Not only in Frederick County, but the entire Mid-Atlantic. His research on the fire blight virus and rots and fungi that we fight are instrumental in enabling us to grow apples in high quality around here.”

According to Glaize, Yoder always made himself available to help out whenever there was a problem with an orchard.

“If we find something in the orchard and we don’t what it is, if I ask, Keith will be out there in a few hours to help us,” Glaize said.

Yoder, who lives in Winchester with his wife Esta, said he always enjoyed interacting with growers and that he will try to keep in touch with them and the staff at the research center. He said his decision to retire was simply because “it’s just time.”

"We are going to miss that expertise. He has done a tremendous job. He was very dedicated to the job, and he's going to be very hard to replace."