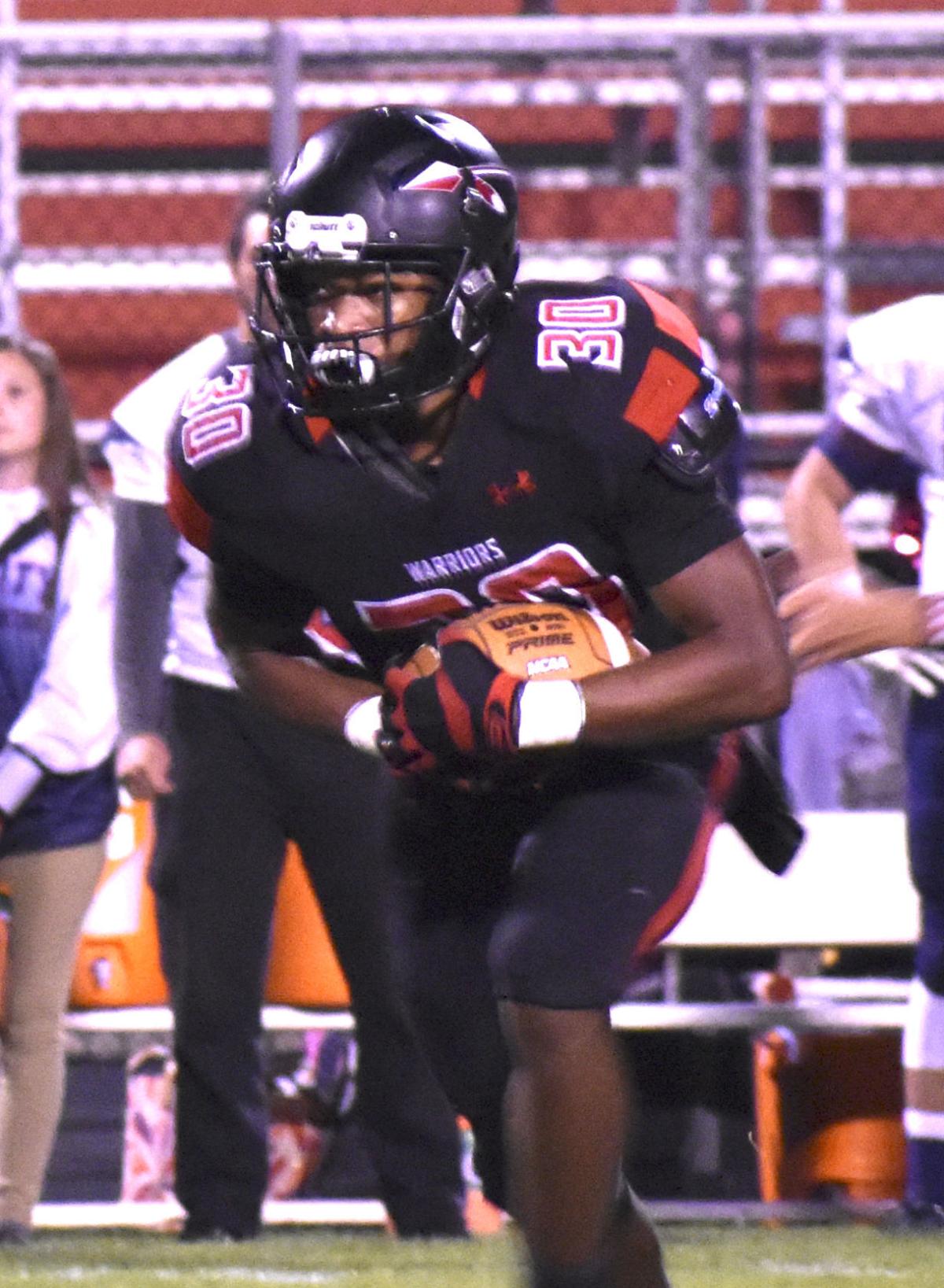 Sherando’s Darius Lane will report to NCAA Division I Valparaiso University in Indiana this summer. Players like Lane will be reporting later than expected because of COVID-19, but their coaches have been actively preparing them for football and also making sure they’re doing well from a health and emotional standpoint. 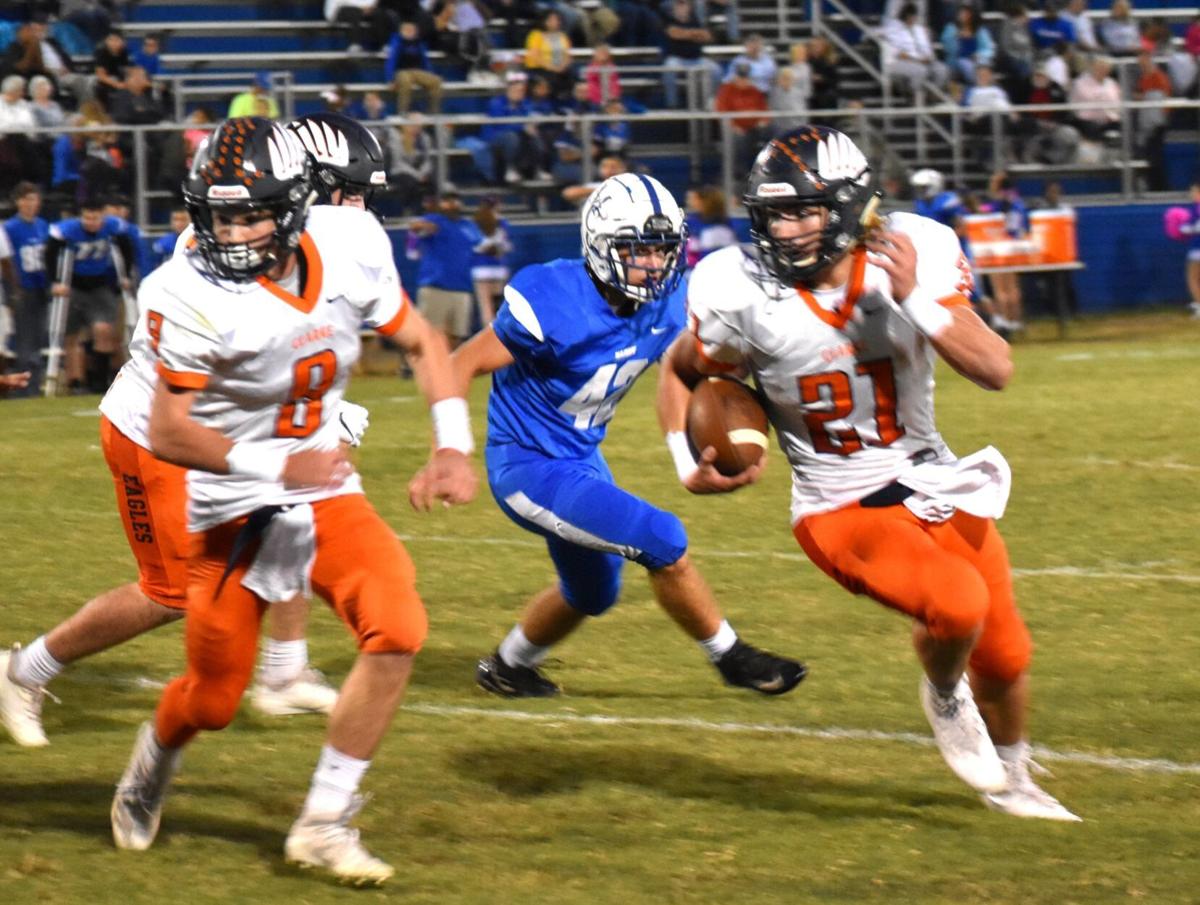 Clarke County graduate Peyton Rutherford (21) and Sherando graduate Payne Bauer will look to report to James Madison University in July. Prior to the COVID-19 pandemic, they were initially asked to go to Harrisonburg on June 14. 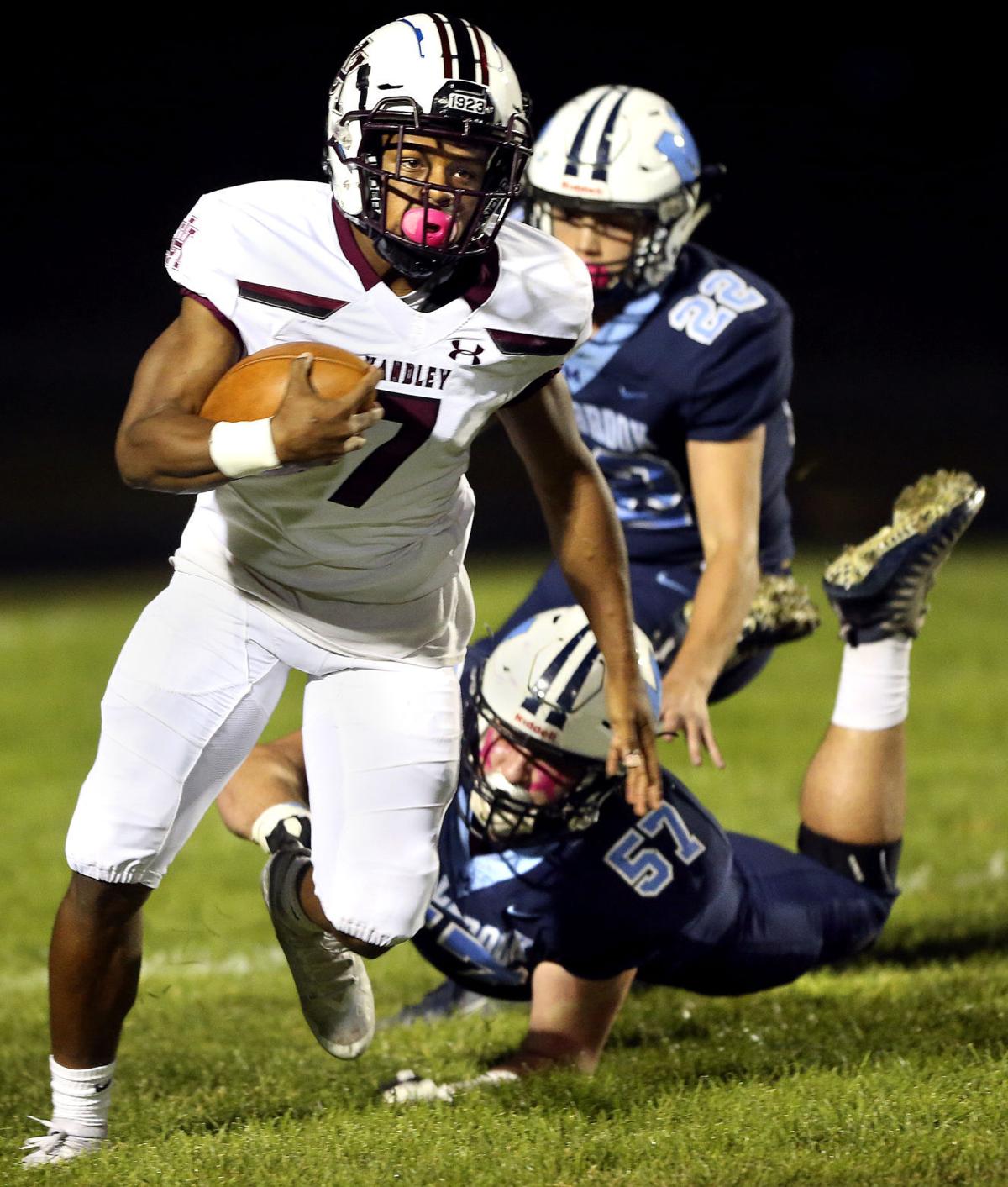 Like his fellow rising freshman, Handley's Malachi Imoh appreciates the attention he's received from his future college coaches during the COVID-19 pandemic.

Sherando’s Darius Lane will report to NCAA Division I Valparaiso University in Indiana this summer. Players like Lane will be reporting later than expected because of COVID-19, but their coaches have been actively preparing them for football and also making sure they’re doing well from a health and emotional standpoint.

Clarke County graduate Peyton Rutherford (21) and Sherando graduate Payne Bauer will look to report to James Madison University in July. Prior to the COVID-19 pandemic, they were initially asked to go to Harrisonburg on June 14.

Like his fellow rising freshman, Handley's Malachi Imoh appreciates the attention he's received from his future college coaches during the COVID-19 pandemic.

Several local NCAA Division I rising freshman football players are going to be reporting to campus later than expected this summer because of COVID-19.

Thanks to their future coaches, they’re going to be prepared to take on just about anything that’s in store for them when they do arrive.

But area athletes also like that their coaches are frequently checking in to see how they’re doing as people.

For nearly three months they’ve lived in a state of uncertainty because of COVID-19 and kept away from their friends, teachers and athletic facilities they used to enjoy every day at school. And coaches are not only asking about mental and physical health, but also talking about social issues. The death of George Floyd has sparked discussions about racism and protests around the world, and Lane — who is black — appreciated that Valparaiso chose to talk about race during a team Zoom session on Monday.

Moments like that are probably why none of the six athletes interviewed have any major concerns about reporting to campus and being in close contact with other athletes for the first time in months. They trust that the institutions they’re going to will take the necessary precautions to deal with COVID-19. The reopening of college campuses has already seen numerous football players test positive for COVID-19, including multiple people at Alabama, Oklahoma State and Marshall.

“I’m just excited to be around the guys for the first time and get to know everyone,” Bauer said. “If we have to wear a mask or whatever type of measures they want to take, I’m just going to be excited to be there.”

Prior to the pandemic shutting down schools, the linebacker Bauer (6-foot-2, 235 pounds last fall) and the running back Rutherford (6-0, 210) were each supposed to report to Harrisonburg on June 14. Bauer said it will likely be after July 4.

Without a weight room to access (he recently started accessing a neighbor’s weight set), Bauer said he’s been going heavy on sit-ups, push-ups and pull-ups, and running as much as he can. JMU recently provided a new conditioning workout that Bauer is enthused about.

Without access to weights during the first couple of months of the stay-at-home order, Rutherford said he also focused on push-ups and sit-ups.

Recently, Rutherford has been able to lift at the house of another future college player in James Wood rising freshman Jackson Turner, who will play for NCAA Division III Endicott College in Beverly, Mass.

“He checks in to see how I’m doing, see how my family’s doing,” Bauer said. “It’s a pretty good deal.”

When Bauer does report to campus, he should have no problem unwinding after a grueling practice. He said he talks to his roommate, defensive lineman and Patriot graduate Tyler Negron, “pretty much every day.” That relationship is part of a larger community.

“In the meetings, they made it pretty clear it’s family first,” Bauer said. “With all the stuff going on in the world right now, they want just us to know there are things that are bigger than football right now. They made that really clear, which is great.”

Rutherford said he likes that the coaching staff has been telling the players that preparations are being made for COVID-19.

“They’ve said they’ll have a whole procedure for what we’re going to do when we get back,” Rutherford said. “So I’m not crazy nervous about it.”

The defensive back Hayes (5-11, 160) was supposed to report to Richmond June 21, but that has been pushed back to an indefinite date.

Hayes said Richmond has been holding position meetings every week and with the entire team every two weeks, and the players are in contact with the coaches just about every day in some form.

“They’re really supportive of us,” Hayes said. “It’s been a struggle for guys to able to do what they need to do [to stay in shape]. But we push through the adversity of it.

“[In meetings], we talk about goals we have for the season and talk about things like coverages. The coaches have really helped us.”

Hayes said he’s been using relatives and teammates to keep in shape. For two weeks he went to live with his cousins in Louisa County — his cousin Robert Morgan is a star running back for the Lions — so he can lift weights at their house. He’s been frequently working out with his close friend, fellow Sherando graduate and Richmond defensive back Aaron Banks, a redshirt sophomore.

“We push each other to be the best that we can be every day when I’m working out with him,” said Hayes of Banks.

Hayes said he’s willing to take whatever precautions he needs to make with COVID-19, because he’s eager to get out on the field and prove himself.

“I’ll be the little fish in the big pond again,” Hayes said. “There’s no doubt I can go up there and compete to the best of my abilities.”

The 5-foot-7, 170-pound Imoh — who rushed for more than 2,000 yards as a quarterback last fall — said he’ll likely be arriving in Williamsburg in late July or early August.

Imoh said incoming freshmen were just added this week to the Tribe’s Zoom meetings, but he’s been in frequent contact with running backs coach Christian Taylor via text.

“It’s been nice having him keep in touch, asking how we’re feeling,” Imoh said.

Imoh said he’s been following William & Mary’s workout regimen for a couple of months. Recently, he’s been able to get some in-person training assistance for strength and speed from the staff at FASST in Winchester.

The long snapper McKnight (5-11, 200) said Morehead State in Kentucky is optimistic the team can get going with workouts after July 4, but things can change.

McKnight said the coaches have been checking up on players over Zoom, with the first of three team sessions taking place in April.

Another thing that helps the personal relationship is the team’s big brother program, which pairs freshmen up with sophomores. Each duo is in phone contact every week.

“It gets you to know somebody on the team, and that’s going pretty well,” said McKnight, who speaks with kicker Connor Ott. “It’s definitely nice to have communication with someone on the team besides the coaches.”

Since a lot of players don’t have free weights, McKnight said the body weight workouts Morehead State has given them have been helpful.

“It’s taken the focus away from strength and more into conditioning, because without a weight room it’s hard to build genuine muscle strength,” McKnight said. “But the opportunity to get more conditioned and prepare for the season is still there.

“It’s awesome they’re making things work for us. The strength coach there [Matt Rhodes], he seems to really be involved in the players’ lives and knows how to connect with the players on a physical level.”

The running back Lane (5-10, 185) was initially supposed to report to Valparaiso in Indiana on June 18. Lane said Valparaiso also has a big brother program, and those are the people they would have lived with during training camp. Lane said the Crusaders have rescheduled orientation for July 10, but the coaches don’t know how workouts will go from there.

As far as working out at home, Lane said he’s benefited from having barbells and other weights to help with the regimen provided by the Crusaders.

Lane said Valparaiso has had Zoom meetings throughout the pandemic that have kept the players up to speed, usually twice a week. The first part of the Zoom session is the informational portion for the whole team, then they break off into offense and defense, then position groups.

The Zoom meetings aren’t just about football. Lane said Crusaders football Landon Fox brought the team together on Monday to talk about the racial issues the country is dealing with.

“We got a chance to speak about how we feel about it, and that helped educate some of the white players or people who just don’t understand why we feel the way we feel,” Lane said. “That seals the deal for how great of a person and how much Coach Fox cares for his team.

“[Monday] night kind of reminded me how good of a choice I made, picking the college that I’m going to, because not many coaches will take time out of their lives or their football schedule to talk about social issues. That meeting was not only just for [the players], but it was for him alone to get educated. That’s something that he mentioned often. He doesn’t understand [what his black players] are going through, even though he would like to, just because he knows how much it hurts black people. It’s really reassuring as a player and as a black person to have someone give you an opportunity to educate them and give them your feedback on what’s it like for us in society.”