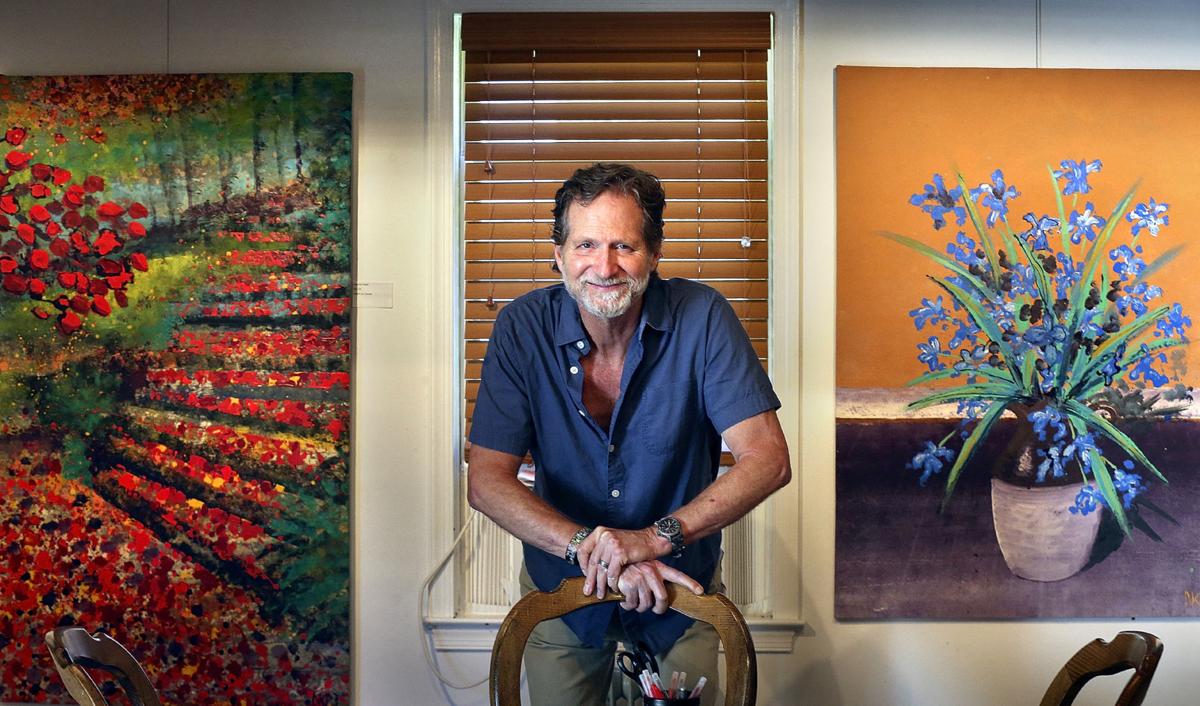 Keith Patterson poses with his work at his home on Lewisville Road in Clarke County. 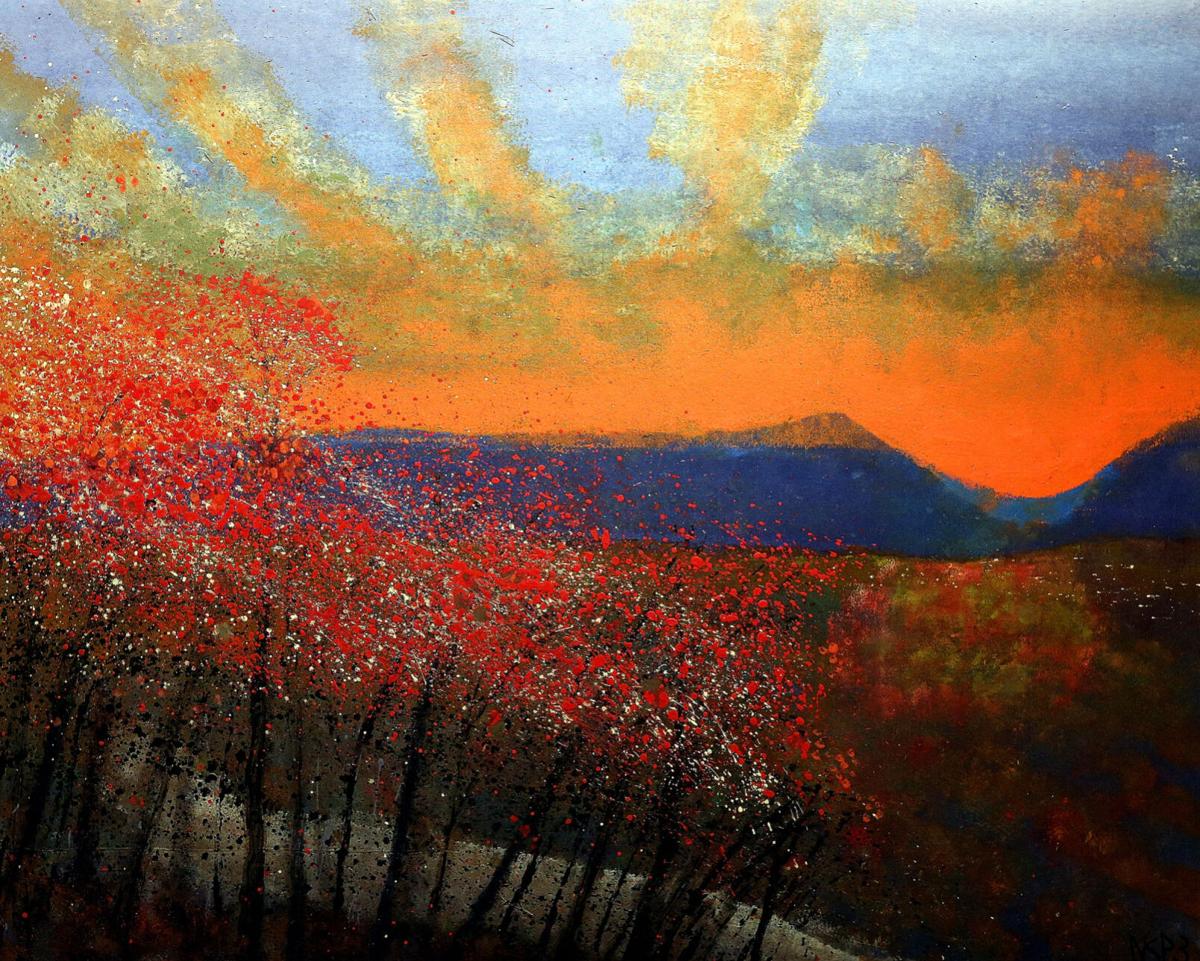 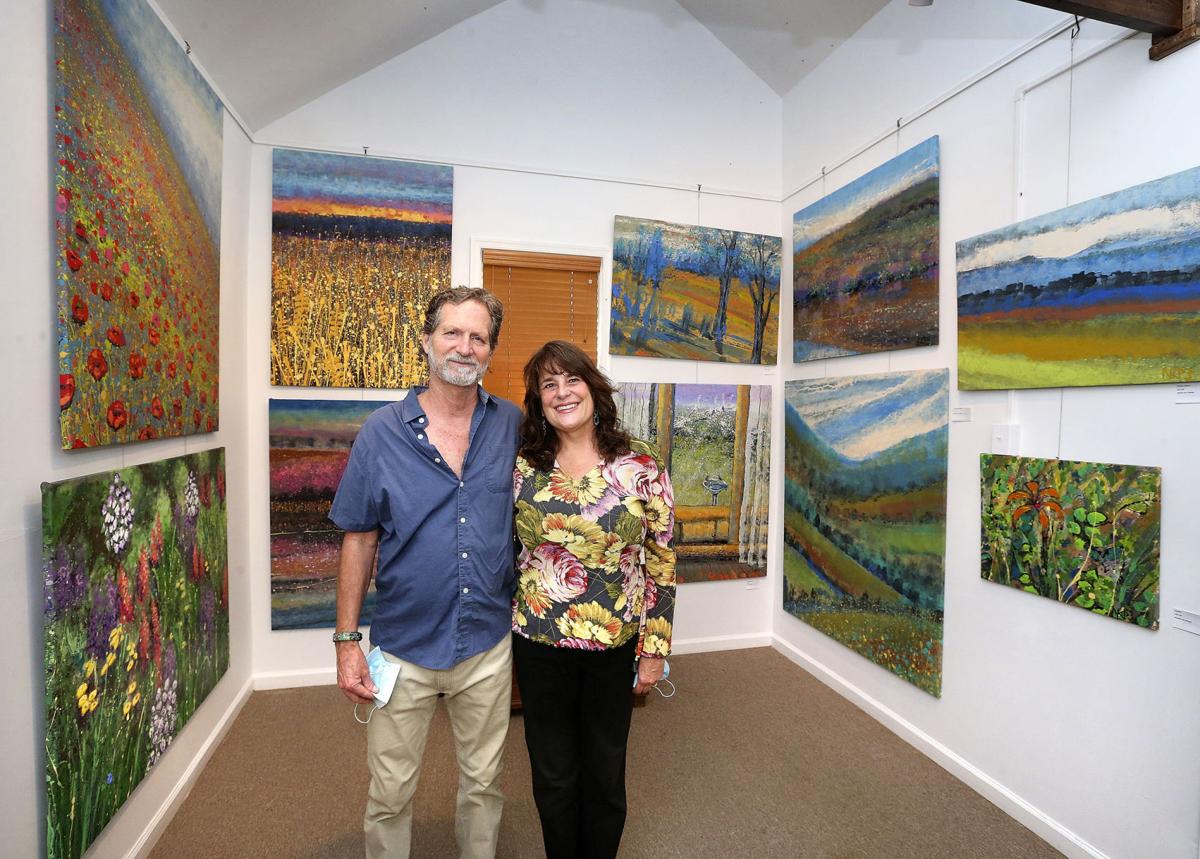 Clarke County artist Keith Patterson and wife Kelli pose with his work at their home on Lewisville Road in what once was a tack and harness room for horses that they converted in to the Cosmic Harvest Gallery.

Keith Patterson poses with his work at his home on Lewisville Road in Clarke County.

Clarke County artist Keith Patterson and wife Kelli pose with his work at their home on Lewisville Road in what once was a tack and harness room for horses that they converted in to the Cosmic Harvest Gallery.

BERRYVILLE — Keith and Kelli Patterson have turned a guest house at their five-acre homestead on Lewisville Road into a showcase for his decorative paintings. With the COVID-19 pandemic, “it’s been harder for artists to find venues” to display their works, said Kelli Patterson. So they decided to create one of their own inside the structure, which is nearly a century old and first was used as a tack and harness room for horses. The property originally was part of Charles Preston Carroll’s land holdings. Carroll sold the property to his sister, Olivia Carroll, and her husband, Hugh Nelson Ritter, in 1924. The home and carriage house were built a year later. “We did a little bit of a makeover” on the carriage house — which later became the guest house — to make it suitable for a gallery, said Kelli, who recently retired as executive director of the Long Branch Historic House and Farm near Millwood. For instance, they installed overhead beams on which lights were placed and trim moulding on which hooks were installed for paintings to hang on. Most of Keith Patterson’s works currently on display in the recently-opened Cosmic Harvest Gallery are nature depictions, including mountain scenes and flowers and trees in fields. There is one of birds sitting on the edge of a birdbath in a yard, as viewed through a window. A couple of paintings feature flowers in vases on tables. “We’re trying to concentrate on bringing a little beauty into the world,” Keith said, “to counteract negativity” stemming from the pandemic and antagonistic political campaigns. While he has enjoyed painting for most of his life, Keith has been doing it professionally for only about nine years. Previously a home improvement specialist, he also has written short stories and songs and was a member of a band called Primal Virtue. Natural settings across the Shenandoah Valley inspire his artistry. They’re some of the most beautiful he has seen, and they’re constantly changing as the life cycles of flowers, trees and plants evolve, he reasons. “Everyone wants a painting of the Blue Ridge Mountains in the fall” depicting the different, vibrant leaf colors, said Keith, who has sold about 400 of his paintings. More and more, Keith is using acrylic house paints in his works instead of traditional paints developed for artists. “I can dribble it, splatter it, mix it with water and make it do different things,” he said. Sometimes when the paint absorbs into wet canvases, the back sides look more visually appealing than the front sides, he mentioned. Keith uses brushes to create special effects, such as by splattering paint, but he doesn’t use traditional brush strokes in his paintings. Rather, he relies on techniques such as dipping a twig into paint and then dragging it across the canvas, as well as using parts of a four-inch-long household paint roller to apply colors. “Dripping and splattering are more like what nature does,” he said. “Nature doesn’t go in straight lines.” Keith describes his artistry as “trying to use abstract techniques to pull off impressionist paintings.” He paints daily, both for enjoyment and to keep up with demand for his works, some of which are commissioned. “I’ll get in a little bit of a trance” occasionally, he said, and paint for up to 16 hours, or until Kelli tells him it’s time to stop for the day or directs his attention elsewhere. Having become friends while attending George Mason University, Keith and Kelli became a couple about a decade ago after she provided him space on the homestead to use as an art studio. They married in 2015. “Kelli keeps me alive in so many ways,” Keith said, holding her hand during an interview. If it wasn’t for her, he said, “I’d lose myself” in painting. Nathan Keith Patterson III, who signs his works as NKP3, surmises that he enjoys painting because he gets inspirations that grab hold of his emotions and won’t let go until he portrays them visually to share with other people. He admires many other artists, ones who lived in the past and ones alive today, both professional and amateur. Perhaps he underestimates his own talents. “Sometimes I see other people’s art and it crushes my spirit,” Keith said. “I see how middling my talent is,” to his perception. When that happens, “I have to ramp up my spirit,” he said. For an artist to embrace his or her inspirations, “you have to have some belief (in yourself) that borders on conceit.” “I sort of careen between having an incredible sense of self-worth and wondering what I’m doing” by attempting to earn a living as an artist, he admitted, gently beating on his chest in frustration. “But I couldn’t be more content in life,” Keith said, doing what he enjoys and spending time with a partner he adores. “I’ll be painting on my final day on this earth,” he assumes. “I’m expecting that,” Kelli chimes in, smiling. “We look forward to the post-COVID world where we don’t have to do appointments only” and can open the gallery full time, and perhaps hold parties and community events there, Kelli said. For an appointment to visit Cosmic Harvest Gallery, call Keith at 571-235-5786 or Kelli at 540-431-8320. They also can be emailed at nkp3art@yahoo.com and cosmicharvestllc@yahoo.com.