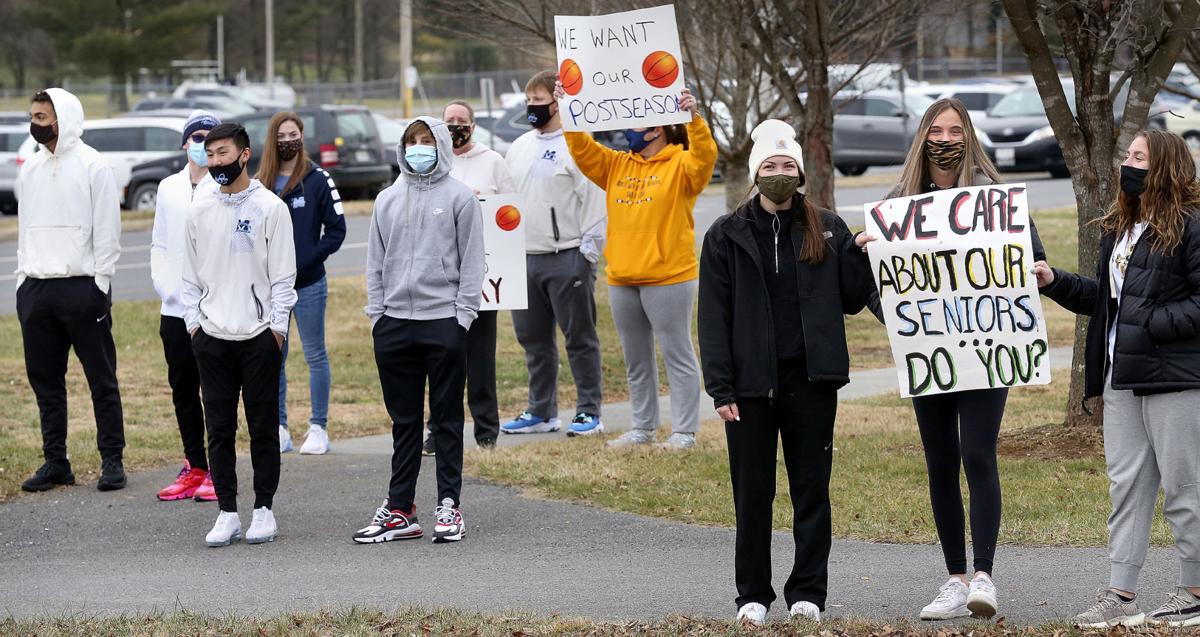 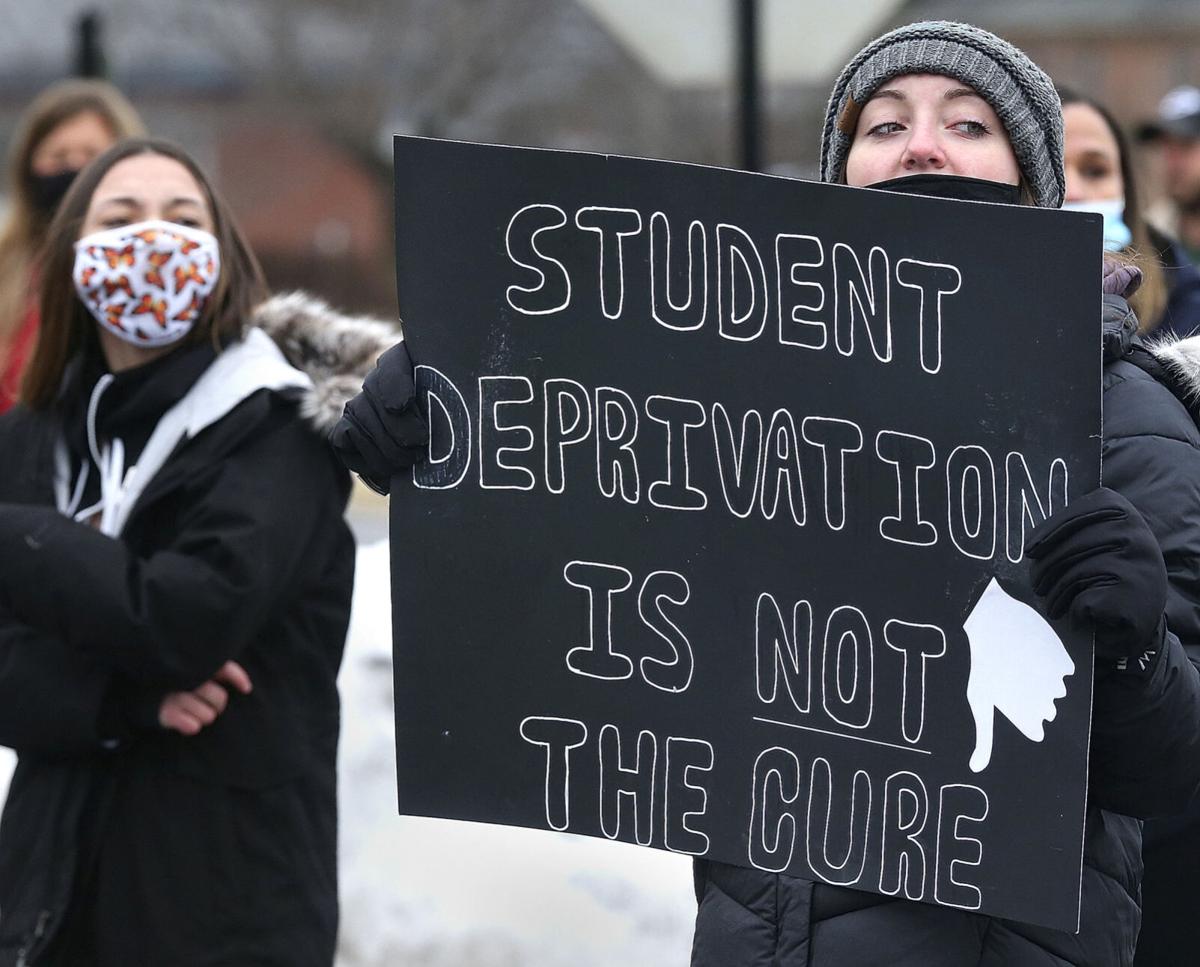 James Wood High School senior Kayleigh Fridley carries a sign as she protests with other student-athletes outside the FCPS Administrative Building on Amherst Street in Winchester on Friday afternoon.

James Wood High School athletes Jaden Ashby (right) a junior, and Andrew Waters, a senior, carry a large banner outside the Frederick County School Board Headquarters on Amherst Street in Winchester Friday during a demonstration by students and parents against the decision by the board to not allow high school sports to resume until March 1. Andrew plays football and baseball at James Wood and Jaden plays football, basketball and baseball.

James Wood High School senior Kayleigh Fridley carries a sign as she protests with other student-athletes outside the FCPS Administrative Building on Amherst Street in Winchester on Friday afternoon.

James Wood High School athletes Jaden Ashby (right) a junior, and Andrew Waters, a senior, carry a large banner outside the Frederick County School Board Headquarters on Amherst Street in Winchester Friday during a demonstration by students and parents against the decision by the board to not allow high school sports to resume until March 1. Andrew plays football and baseball at James Wood and Jaden plays football, basketball and baseball.

A week ago, James Wood wrestling coach Cory Crenshaw said he was hoping to see senior Joey Vitola finish his career strong after last year's agonizing region tournament, when he was one win away from qualifying for states but suffered two close losses in his final two matches of the region tournament.

Because of what happened at Tuesday's Frederick County School Board meeting, the 2019 All-State wrestler isn't going to get many chances to display his ability at all this year. And the Virginia High School League state tournament is scheduled to be done with by the time his wrestling season even begins.

Vitola was one of more than 60 athletes and parents who showed up to protest outside the FCPS Administrative Building on Friday afternoon. The two-hour protest started at 3 p.m.

It was the second time this week athletes have come together to voice their displeasure over the FCPS decision to delay winter and fall sports. The decision limits each of their seasons to four weeks (March 1-27 for winter, March 29 to April 24 for fall). Those season dates make it impossible for athletes in either season to compete in the postseason.

"Since freshman year, I've been working as hard as I can," said Vitola, who was making move from 152 to 170 pounds this year. "Now it's my year to show what I've really been trying for. It's just being taken away from me and it sucks. A lot."

Vitola was there on Friday to join in the choruses of "Let us play!", 'Hear our voice! We have a choice!" and "We Won't Stop!"

Students lined the sidewalk leading to the parking lot and also spent some time on the grass at the front of the property near Amherst Street to draw attention for the cause, holding a large "Let us play" banner and signs that said things like "Post-Season 4 All."

Wednesday's rally featured mostly James Wood students, with only about 15 people showing up due to the quick turnaround from Tuesday's meeting. But athletes from Millbrook, Sherando and even Handley came out to protest on Friday. Handley got clearance to participate in winter sports immediately on Thursday as a result of a Winchester School Board vote.

"[What happened with Handley] makes us a bit more hopeful, but it's also frustrating," said James Wood senior cheerleader Kayleigh Fridley, one of the main organizers of the protests. "Handley found a way to accommodate their students, and Frederick County can't do the same thing."

Though there are at least eight programs in the Northwestern District and Lord Fairfax Health District that have recently had to quarantine, out of the 15 schools in Region 4C, only the three Frederick County schools are not participating. Each of the eight Bull Run District teams are also attempting a winter sports season.

"I think it's really unfair that all of the other districts get a season and a postseason, and we only get eight games," said O'Roke, citing the number of games she's been told that Millbrook will play in its basketball season. "I don't think that's right at all.

"Our team doesn't have any seniors. But for seniors on other teams in our county, it's probably really difficult for them not having a season."

Kelly Warnagiris's daugher Kimberly, a two-time Winchester Star Girls' Swimmer of the Year, is one of those seniors. Kelly Warnagiris is also the team administrator for Winchester Swim Team, which has more than 100 members. She said they have not any COVID-19 cases while competing in practices and meets throughout Virginia since August.

"It's just not fair to the swimmers, to all the athletes in the area," Kelly Warnagiris said. "It just takes a little extra work [to do COVID-19 mitigation] from the people that are involved. Most people that are involved with sports, coaches, parents, they're willing to put that extra effort in to keep [athletes safe]. It can be done. To say we're not willing to put in that extra effort is a disservice to all athletes."

Fridley was encouraged to see people inside the FCPS building routinely peaking through their windows at them. The protesters were hoping that FCPS Superintendent David Sovine would come out and address them, and they waited until 5 p.m. for him before leaving.

The protesters weren't sure if Sovine was even in the building on Friday, but they plan on taking more action in hopes of having a chance to use their voices for reason, and not just loud chants.

"We're not going to stop until they listen," Fridley said.

"Maybe none of this will make a difference," said Angello Markello, whose daughter Khyla Mason cheers for James Wood. "But at least they know that these kids are here, and they're upset about [sports], and they made a wrong choice to take sports away from them."