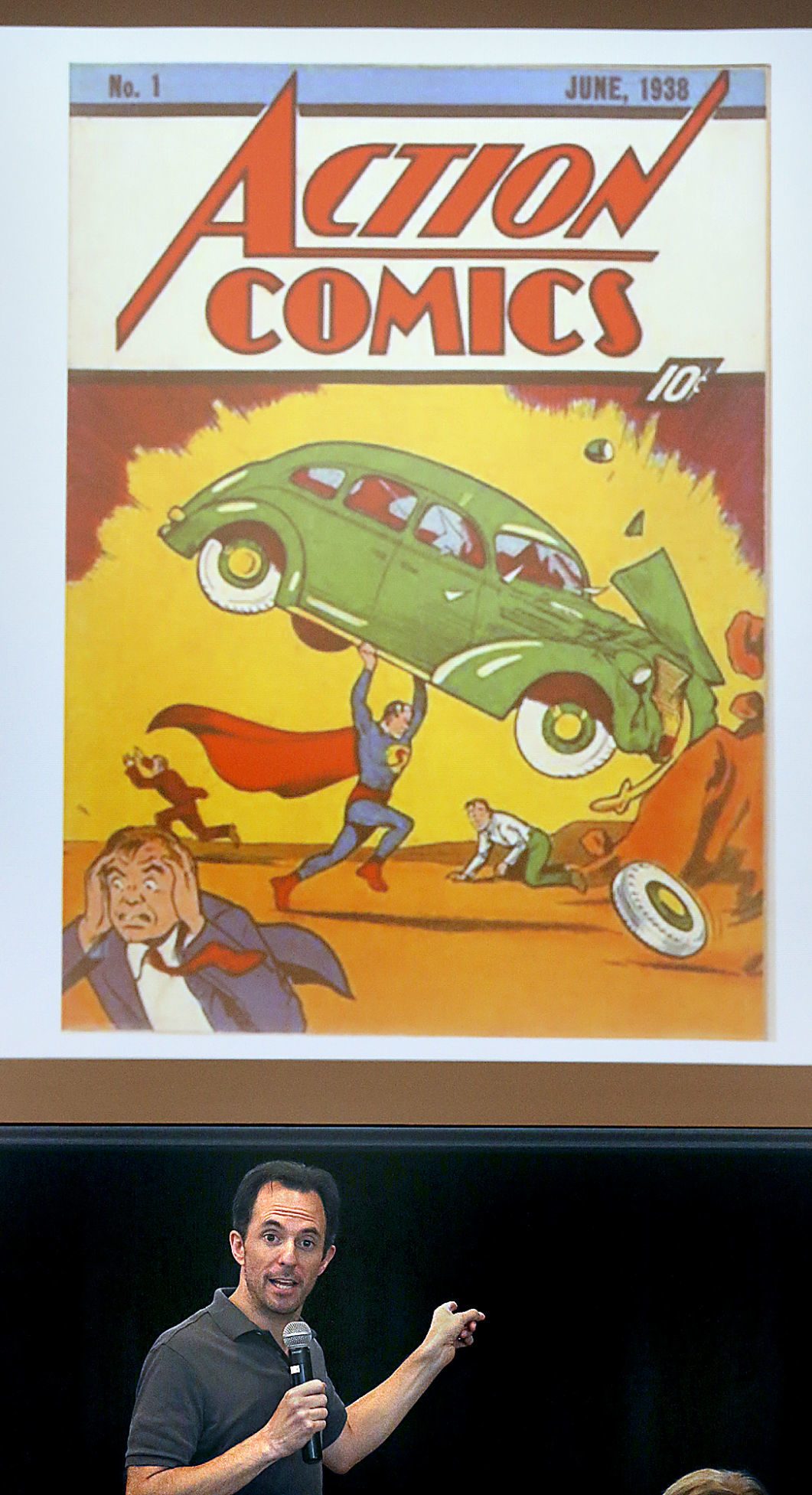 Mark Tyler Nobleman, author of "Boys of Steel: The Creators of Superman" points to the cover of the first Superman comic during his presentation at Frederick County Middle School on Thursday. 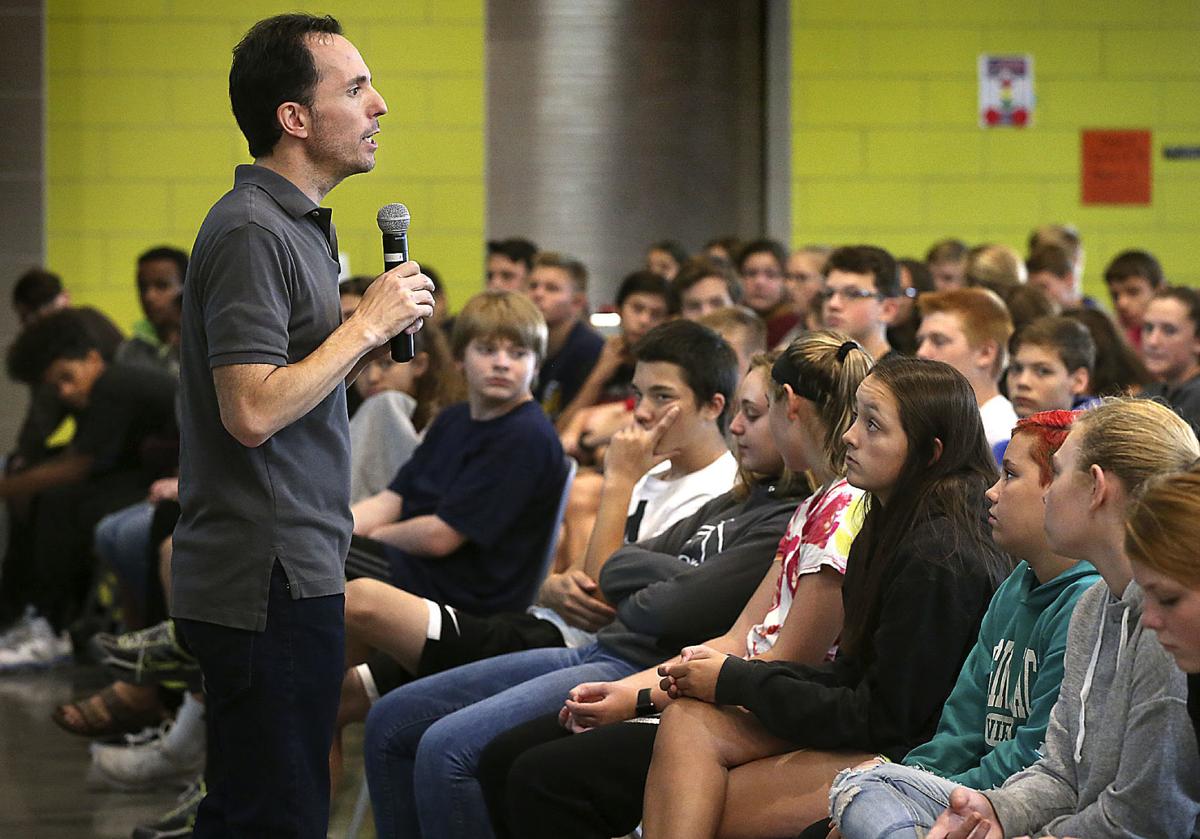 Mark Tyler Nobleman, author of "Boys of Steel: The Creators of Superman," speaks during his presentation at Frederick County Middle School on Thursday. 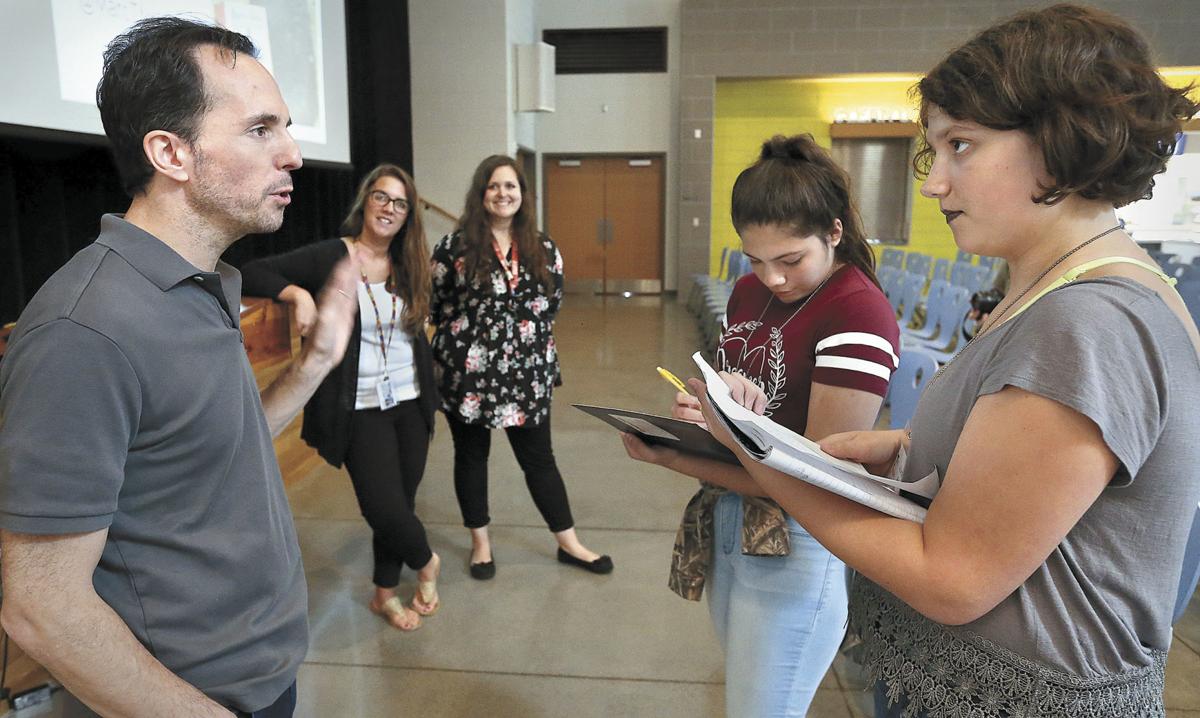 Mark Tyler Nobleman, author of "Boys of Steel: The Creators of Superman" points to the cover of the first Superman comic during his presentation at Frederick County Middle School on Thursday.

Mark Tyler Nobleman, author of "Boys of Steel: The Creators of Superman," speaks during his presentation at Frederick County Middle School on Thursday.

GAINESBORO — Author Marc Tyler Nobleman loved to read about superheroes when he was a kid.

“I embraced superheroes and that kind of storytelling, and I never outgrew it,” said Nobleman Thursday at Frederick County Middle School.

After he grew up and became a writer Nobleman was surprised to find that no one had written a biography about the creators of Superman and Batman. He then wrote two narrative nonfiction picture books called “Bill the Boy Wonder: The Secret Co-Creator of Batman” in 2012 and “Boys of Steel: The Creators of Superman” in 2013.

The author chatted with FCMS students about his findings from the two books. Nobleman has toured schools since 2001 and has traveled the world, speaking in such countries as Chile, Hong Kong and Peru.

“Superman is world famous, which makes it strange that most people know nothing about his history in the real world — who created him, where, why and how,” Nobleman said.

Nobleman said he approaches every book as a detective, not a writer. Researching and writing is like a game of hide-and-seek to him.

“Not everything is online. Not even close,” Nobleman said. “We need more detectives, and you’ve all played hide-and-seek, which means you’re ready to go.”

When Nobleman wanted to dig deeper into the stories of the creators of Superman — Jerry Siegel and Joe Shuster — he visited Siegel’s former home and found the room and the window he sat beside to work on Superman.

Siegel and Shuster were in high school in the 1930s when they first came up with the idea for the superhero. After 31/2 years of rejections, they finally found a publisher and, as Nobleman said, changed the world.

Then came Bill Finger, the secret co-creator of Batman. For decades, Bob Kane was the only one who was credited with creating the superhero.

Only two photos of Finger were known, but after going through seven sources and researching for nine months, Nobleman found 11 more photos and met his second wife, whom no one had known existed.

He was later surprised to discover that Bill wasn’t even his real name. It was Milton.

Finger died at the age of 59 from a heart condition, and did not have an obituary, funeral or gravesite. But through anecdotal research, Nobleman learned that Finger’s son, Fred, laid his ashes in the shape of a bat in Oregon.

And from there, Nobleman learned that Finger had one grandchild. He convinced the grandchild to talk to DC Comics into adding Finger’s name to the Batman comics. Never before had DC changed a comic byline. Now a documentary of Finger’s story streams on Hulu under the title “Batman & Bill.”

Nobleman said he visits schools to talk about his books partially because he hopes to instill a love of reading in kids who may have lost interest.

“My goal is to try to have them fall back in love with the idea of it and reconnect them to reading, and sometimes a personal connection can do that whereas just handing someone a book might not do that,” Nobleman said.

But for Natasha Van Meter, a FCMS eighth-grader, Nobleman might have re-inspired her to continue writing.

“I’m always losing track, and wondering should I give up,” Van Meter said on her writing process.

Van Meter is writing a science fiction and fantasy book about a group of teens that learn they can use magic but also discover they live in a dystopia, not a utopia.

“He was inspiring, because he was saying you have to take different loopholes,” Van Meter said.