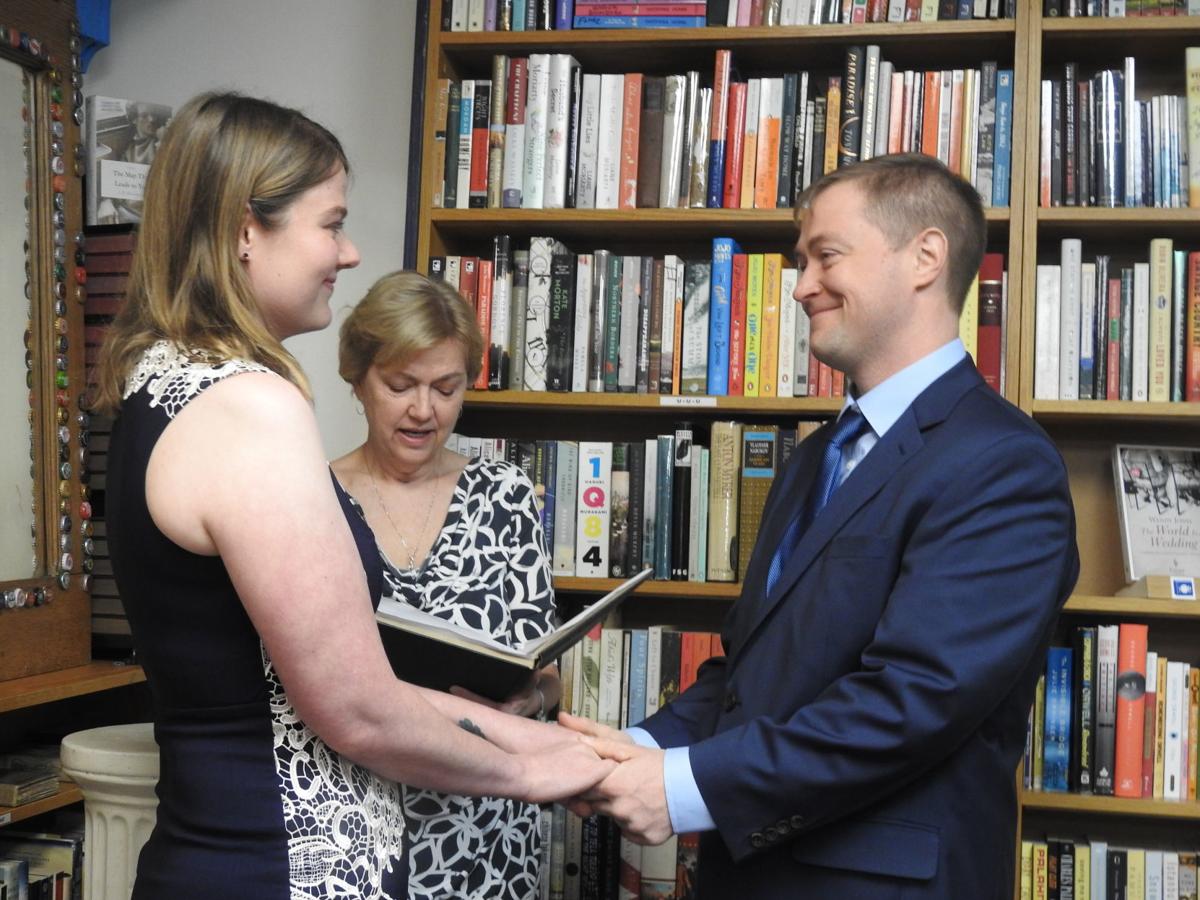 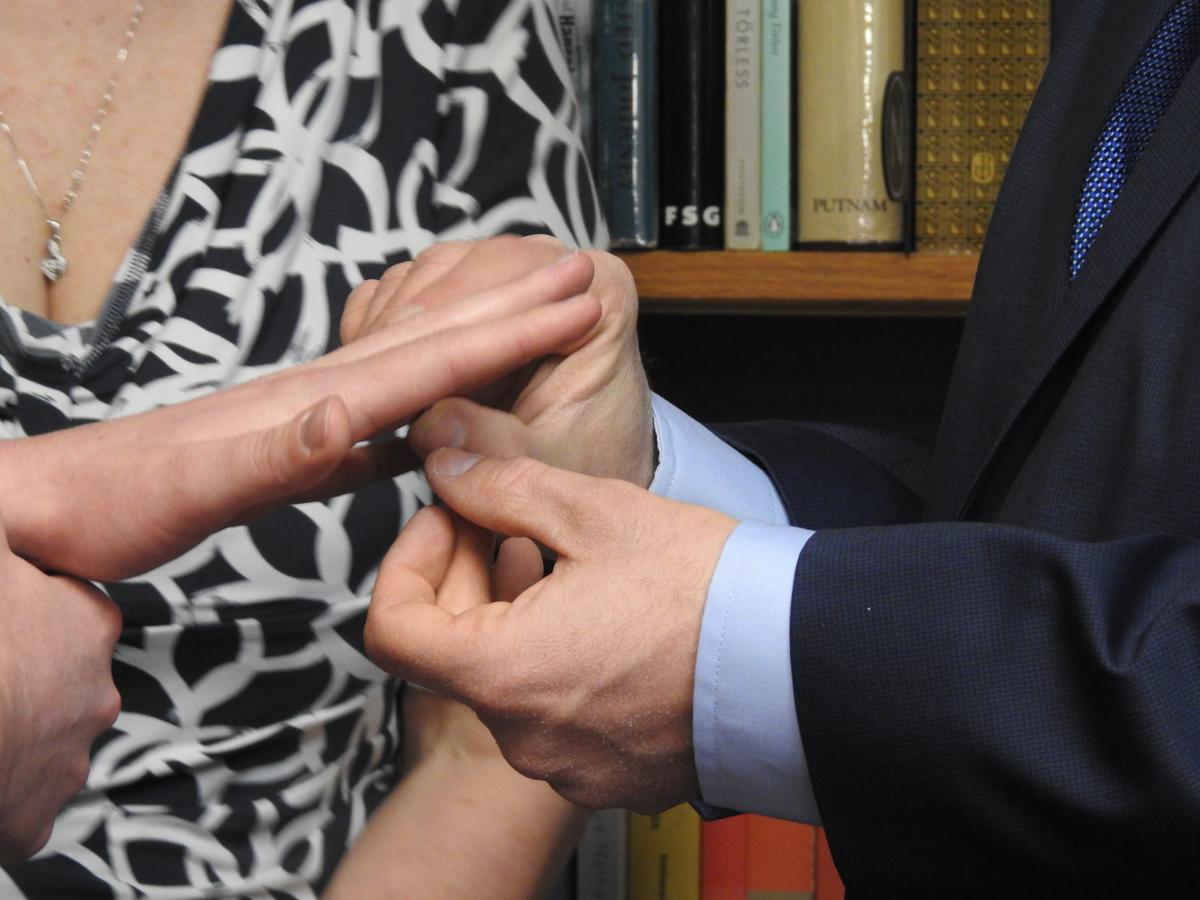 Alice Morgan and Kevin Brockett exchange rings during their wedding ceremony on Sunday at Blue Plate Books in Winchester.

Alice Morgan and Kevin Brockett exchange rings during their wedding ceremony on Sunday at Blue Plate Books in Winchester.

WINCHESTER — Alice Morgan and Kevin Brockett share a passion for reading. When they first started dating, they often found themselves hanging out at Blue Plate Books in Winchester.

Because the bookstore is a special place for them, they decided it was the perfect location for their wedding. So the two exchanged vows there on Sunday morning before a small group of family and friends. Morgan’s mother Carol Smith, a Methodist minister, officiated.

“I think we can all be in agreement that we can’t think of a better place for you guys to get married,” Smith said to Brockett during the ceremony. “I’ve heard stories of your book buying in your early days and I can attest that the only thing Alice ever wanted when she was growing up was a stack of books. I only had to limit her on how many she could get. So a perfect place for you guys. And a place that’s a part of you getting to know each other.”

Morgan and Brockett met in the fall of 2015 through the dating website OkCupid. Morgan was working at Shenandoah University as a recreation coordinator, and Brockett was living about an hour away in Mineral County, West Virginia.

“Having met online, we joked that neither of us was the kind of person that would do online dating,” Morgan said with a laugh. “There have been radio commercials that have come on for online dating and we almost started to make fun of them and then we’d be like, ‘Wait, no, we did that.’”

The two had their first date at El Centro Mexican restaurant on the Loudoun Street Mall in Winchester. They were instantly drawn to each other.

“She’s just really kind and beautiful,” Brockett said. “She has a very sweet personality. She’s very intelligent and interesting and fun to talk to. For our first date we had a lot to chat about. We have a lot of overlapping interests”

Morgan said she felt pretty much the same way.

“I remember meeting him and being like I’m not entirely sure this is a real person because we have so many things we like, so many things in common,” Morgan said. “Best person ever.”

The two discovered they are both avid readers and spent much of their time browsing through bookstores. The store they visited the most was Blue Plate Books, a locally owned and operated business at 2257 Valley Ave. that has over 50,000 used books.

“I think we both really appreciate the used bookstore aspect of it,” Morgan said. “You kind of walk into a used bookstore and you don’t know what you are going to get. All of the books there have a bit of a history. For me, they are a little more personal than a regular bookstore.”

Though the couple now lives in Morgantown, West Virginia, Brockett said they always make a special effort to stop by Blue Plate Books when they are in Winchester.

“It’s really just a very nice atmosphere,” Brockett said. “It has a great ambiance. We’ve gone there many, many times and we always leave with more books than we can read.”

Morgan said the two got engaged on Nov. 13, on the fourth anniversary of their first date.

“We’d talked about getting married in the future, but I had no idea he had anything in mind,” she said. “So it was a very good surprise for me. We were sitting on the couch after dinner, having a silly, fake argument about what to eat for dessert to celebrate, and he said, ‘or you could marry me,’ and pulled out the ring. Obviously, I said yes. He’s very wonderful. You could probably tell that we’re a pretty low-key couple, so I thought the proposal was perfect for us.”

Brockett said when they decided to get married they started thinking about wedding venues and reached out to Blue Plate Books owner Pat Saine.

“We knew we didn’t want to do the traditional thing that most people are into,” Brockett said. “That just wasn’t for us. So we started discussing things that might be fun and would fit our personalities and realized that Blue Plate would be nice.”

After the wedding, the newlyweds and their families went to Bonnie Blue Southern Market & Bakery for brunch, which is where the couple had their second date.

Smith said it has been wonderful watching her daughter and Brockett grow closer together, saying they “found the perfect person for each other.”

What a great story. They should open up their own book store.