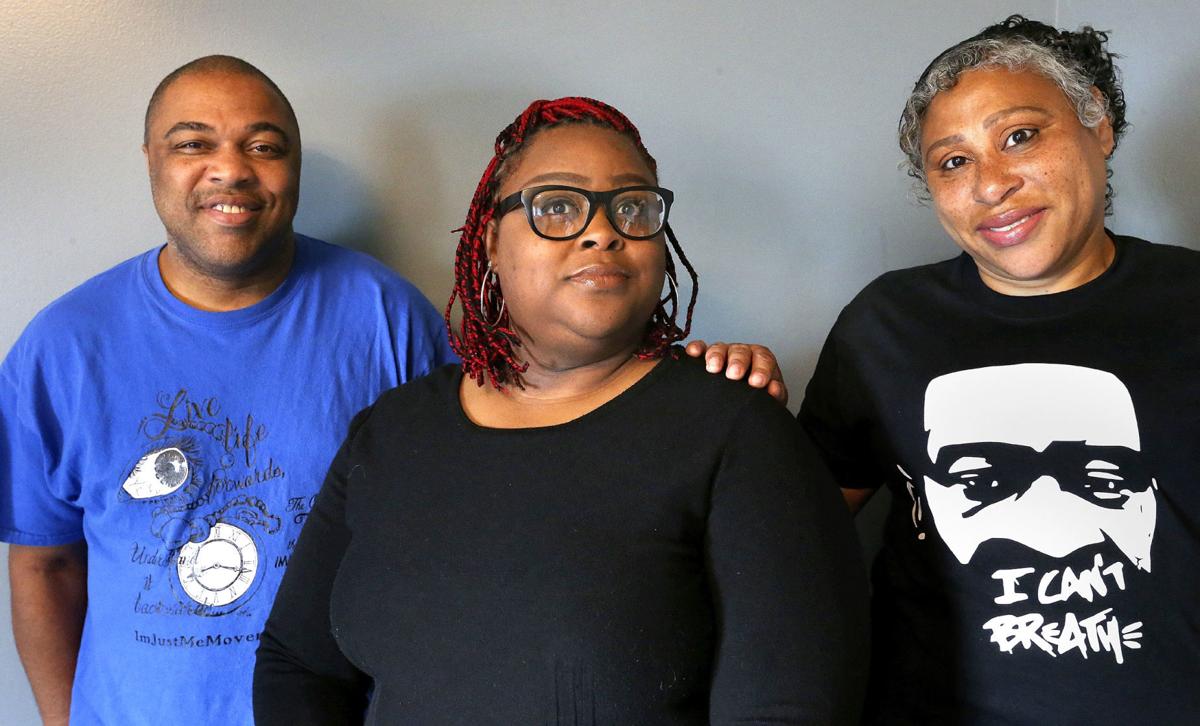 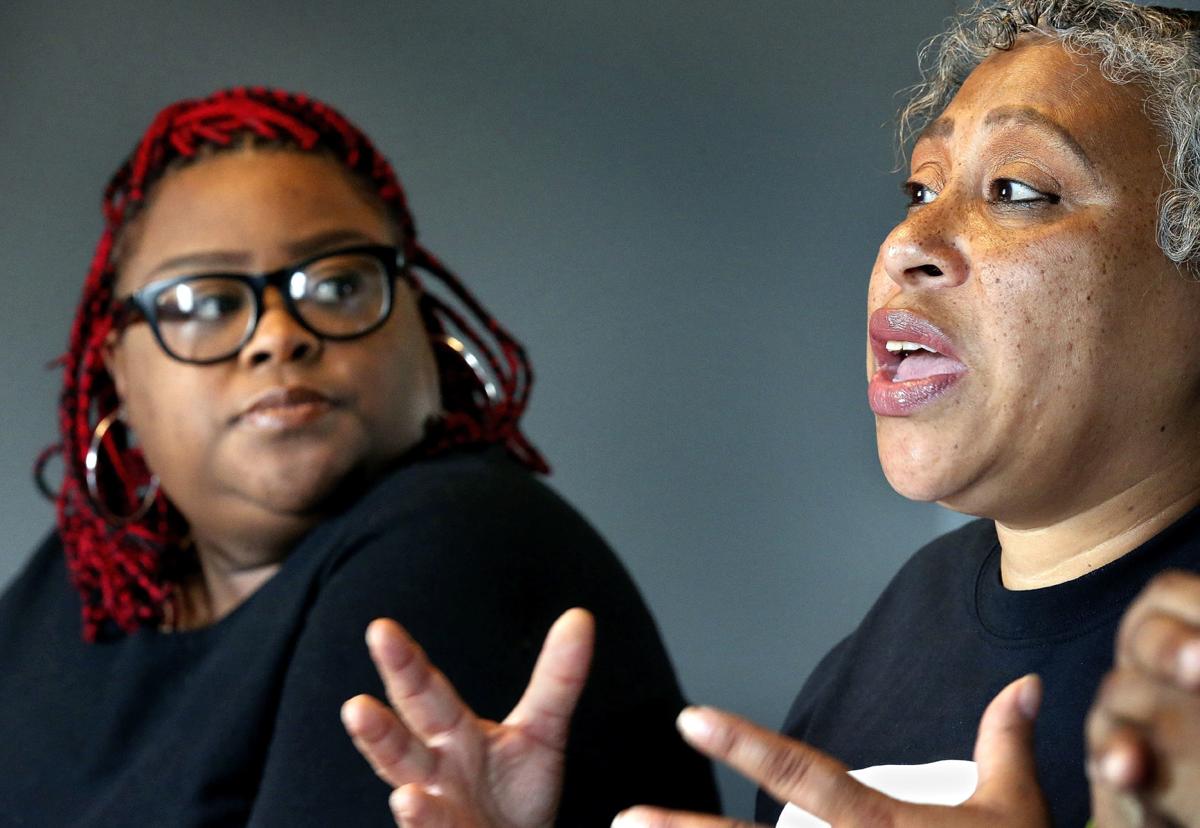 La Tasha Do’zia (left) and Tina Stevens-Culbreath discuss the challenges they face being blacks who run nonprofits in a predominantly white community.

La Tasha Do’zia (left) and Tina Stevens-Culbreath discuss the challenges they face being blacks who run nonprofits in a predominantly white community.

WINCHESTER — Recent protests over racial intolerance and inequality have led many Americans to question whether society will ever be equitable to all races.

On Thursday, The Winchester Star sat down with three African American community leaders to hear their perspectives.

Tina Stevens-Culbreath and her husband, Rodney Culbreath, founded the nonprofit I’m Just Me Movement in 2013 to put troubled children on a path toward success. While their message has been well received, the Culbreaths said their Winchester-based organization has had to fight harder for funding because grants and partnerships that could further their cause are usually awarded to white-led nonprofits.

LaTasha Do’zia created the nonprofit Selah Theatre Project in 2012 to encourage young people in the Northern Shenandoah Valley to express themselves artistically. In 2018, she also became executive director of the Youth Development Center in Kernstown, but she resigned that position last month because she felt she was being held to a higher standard than her white predecessor.

Some people would argue the difficulties faced by Do’zia and the Culbreaths are no different than those of white nonprofit leaders, but their collective experiences could point to subtle, systemic racism, the three nonprofit leaders said.

Do’zia, who said she has experienced little overt racism in her life, has noticed how some white people seem surprised that she is black when they meet her in person.

“I’ve been told how articulate I am, and I just wasn’t what people expected when I walked into a room,” Do’zia said.

“That’s what I get, too,” said Stevens-Culbreath, who also serves on Stephens City’s Town Council.

I’m Just Me Movement, Selah Theatre Project and the Youth Development Center serve people of all ethnicities. Do’zia and the Culbreaths said that actually puts their groups at a disadvantage because a common misconception is that nonprofits run by African Americans only cater to African Americans.

“If you’re [an African American] working with a nonprofit that is not specifically for black or brown children, it’s a lot harder,” Do’zia said. “People say, ‘We have this white counterpart to what you’re doing, so we don’t need to invest in you.’”

“Anything that’s minority-led — whether it’s women, black people — you have to go undefeated,” Rodney Culbreath said. “Any mistake could bring you down.”

Do’zia said she has been asked to serve on the boards of numerous nonprofits and organizations, but she suspects that some of those offers were extended simply because she’s “the one black lady we know who’s articulate.”

“If they don’t know how to engage people of color, women of color, children of color, then I get called,” Do’zia said.

Also, she said, there is often only one chair for an African American at an organization’s board table.

“If there’s one chair, either we fight for that chair or we give up because we don’t see ourselves in that chair,” Do’zia said.

Even when a black person gets a seat at the table, he or she frequently feels like they are being held back or taken less seriously than their white counterparts. Do’zia and the Culbreaths said they have all submitted ideas that were rejected by organizations, only to see those same ideas accepted when presented by a white person.

“People steal your ideas,” Rodney Culbreath said bluntly. “The more they take from you, the more you look like you’re not capable of doing your job. Then you’re on the outside looking in, wondering, ‘Are they going to throw me a bone?’”

“It’s not a level playing field,” Stevens-Culbreath said. “We have to bang on doors loudly, and still we’re not heard.”

Do’zia and the Culbreaths said it has taken a very long time, but thanks to the recent protests and marches across the country, many Americans are finally recognizing the disparities experienced by black people.

“The marches have changed the playing field,” Rodney Culbreath said. “We need to build a better America that we all can be proud to live in, where there are opportunities for everybody.”

“It is time for us to build our chairs and bring them to the table,” Do’zia said. “We’ve been quiet and we’ve been still, but we’re waking up.”

Essentially liberals can be prejudice all they want. BLM.. the klan with a tan.

"..their Winchester-based organization has had to fight harder for funding because grants and partnerships that could further their cause are usually awarded to white-led nonprofits."

This is a very strong, racially-charged accusation. Rather than use emotion to try and push a narrative, could we please have factual evidence to substantiate this accusation? (1) What statistical numbers are used to make this claim? (2) What grants (and how many) were applied for to make this claim? (3) What other groups/organizations would not (or did not) seek partnerships? (4) What comparative analysis was used to determine the grant applicants' qualifications? (5) What reasons were provided to determine the non-interest, or implied racist behaviors?

In the new Liberal States of America, no evidence is required when the accusation is made by a minority. Now, take a knee and apologize for your privilege.

I bet you have *never* benefited from your white privilege, huh?

No, I have not. I have presented my White Man Club card at various bars, restaurants and stores but I have never received a discount or upgrade. I am beginning to think the privilege does not exist. But, I will keep trying.

@Bernie Mac, that was pretty myopic and facile. When was the last time you thought an interaction with the police could end your life? Probably never.

Stop trying so hard to deny that white privilege exists despite having so little to show for it.

Bernie, from reading this article, the readers are left without much to go on. I don't believe the article/authordid this non-profit group's any favors.

I have examined the group's website, and hope you do! It's very well done, well organized, and shows honest 'outreach' to our community. The website's presence is very bright and energetic, which is a 'message' in and of itself.

I would like to learn more about this group, and perhaps the article's author can follow up. Our community's kids could use any extra support, peers, and help that we can muster. The group's mission and activities are easily identifiable, so perhaps this group has not received enough public attention. (Public Service Announcements and some park activities might be of benefit to the group.)

What I was unable to determine was whether or not this non-profit had a Board, or if there were individuals associated with this group who had professional and educational backgrounds. Grant-writing may be an area that this group needs outside help with. Maybe more visibility is needed, and perhaps more volunteers.

I truly hope this group succeeds, despite feeling discouraged. Perhaps asking for assistance or some expertise in areas where the group may not have much experience in could help them.

@ShawFamily - Truly enjoying your responses/replies! Thanks for contributing to the substance of the issues!

Excellent questions based on factual data rather than "feelz". Nothing worse than people claiming prejudice or racism just because of something ephemeral or non-tangible because it then lessens real claims. Not saying that is the case here, but...

It is interesting that you require everyone to come up with facts and statistics (which, even if they did the legwork for you and did it, you wouldn't agree with no matter where it came from) when you don't require same from those with your own viewpoint.

L.O.L. Are you insane? That is, literally, what I (and all the other conservative or libertarian minded) have been told EVERY SINGLE TIME I (they) produce "evidence" to back up my (their) statements. Well, that or "No Response" because you (they, he, she, whatever) isn't able to prove me wrong. Sorry if I don't fall for cherry picking or manipulated data, sorry I don't bow to the Leftist group-think, sorry that I've "been there, done that" with the Leftist agenda. I know exactly what you all are trying to do because I was in, maybe not at the ground level, but pretty darn close. Now, please, continue to NOT show any facts or stats that aren't just a bunch of propaganda and move along to your next outrage topic...

You talk a lot.

Keep talking about it and it will never go away. Sharpton is proud of you.

And what are you doing?

What 'they' are doing is being dismissive and disrespectful of these black folks who are 'trying' to build a better community. God forbid these black residents share their 'feelings'. The fact that this rather milk-toast article drew such a venomous response from these commentators speaks volumes.