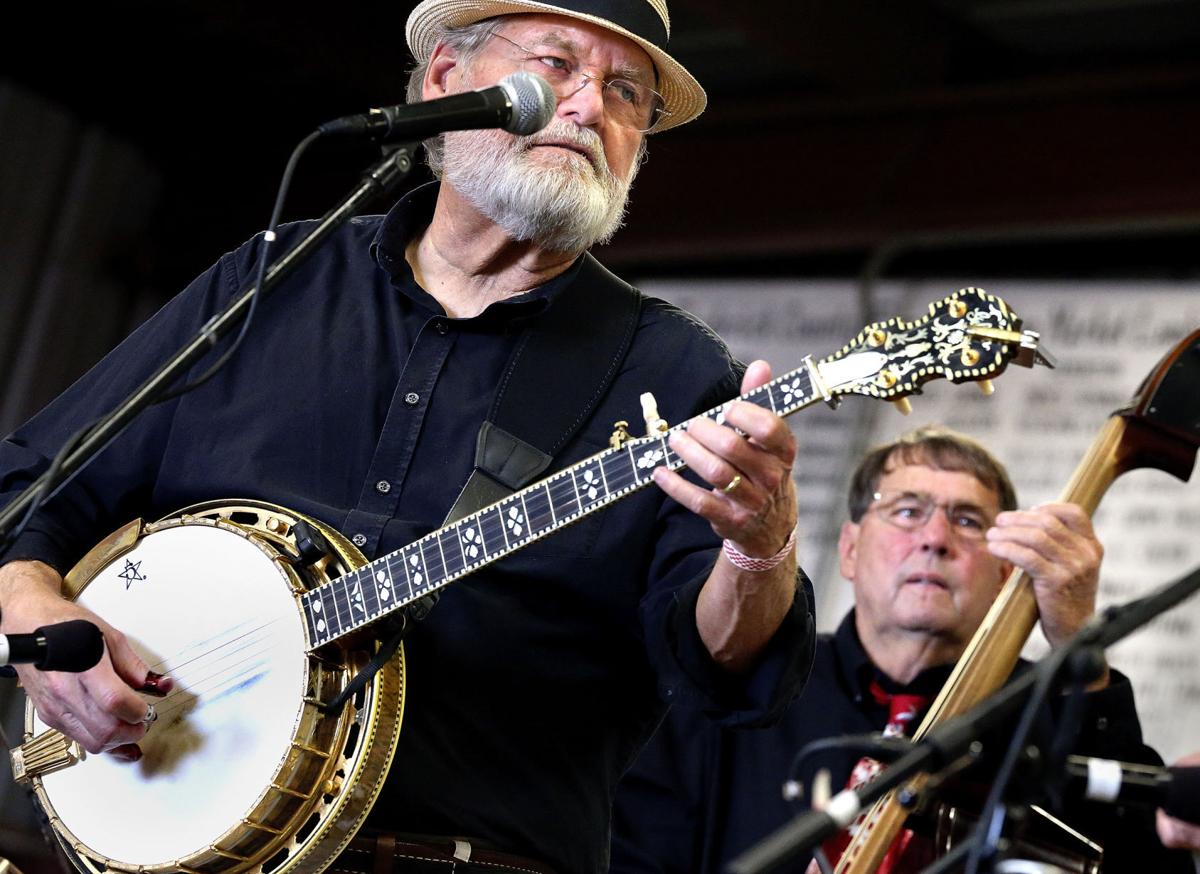 Judge Parker of Ashland (left) and Robert Kidd of Mechanicsville perform with other members of The New River Railroad during the Bluegrass Show at the Shenandoah Apple Blossom Festival’s Bloomin’ Sunday at the Frederick County Fairgrounds. 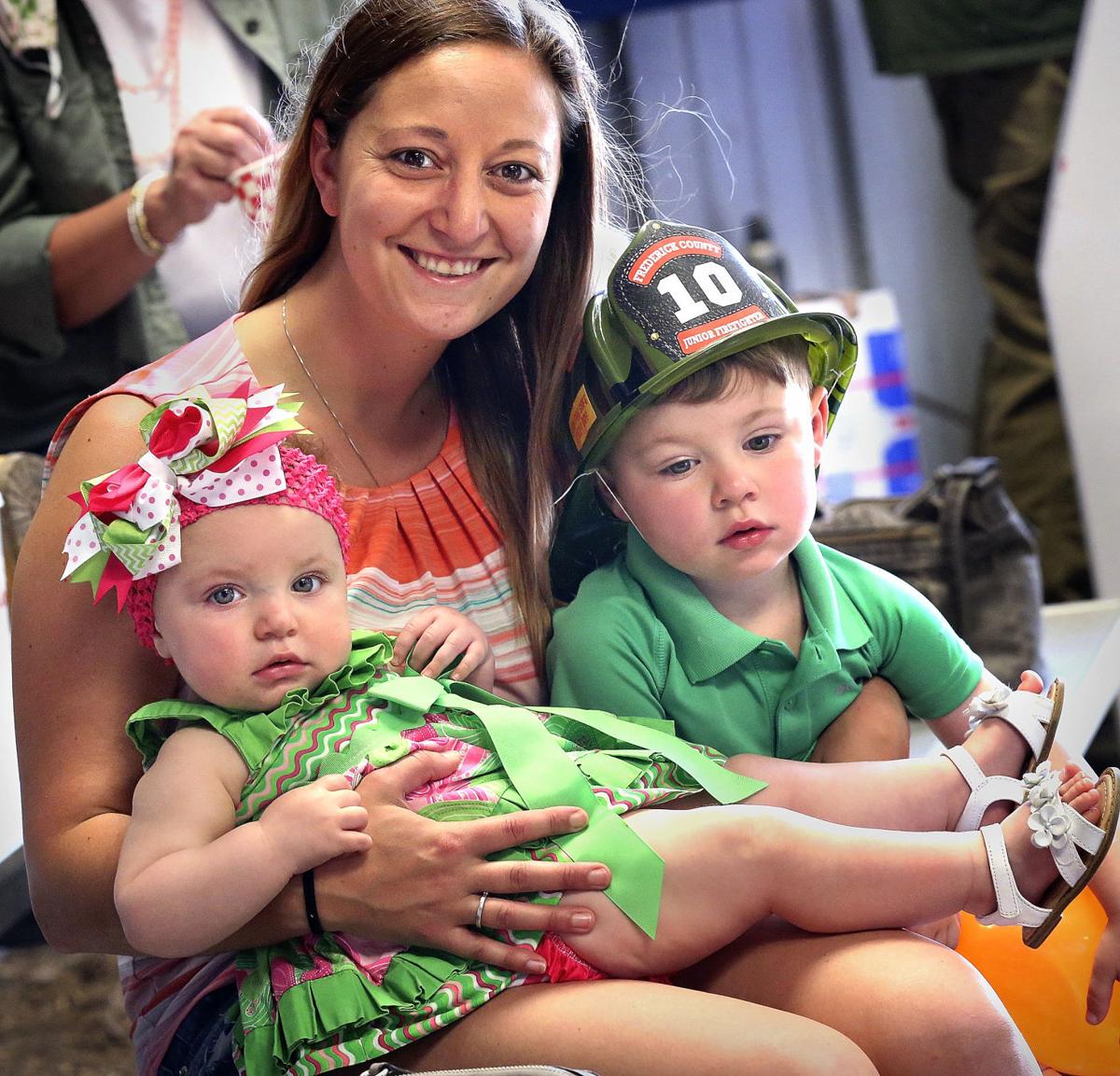 Ashley Dick of Clear Brook and her children, Camden, 10 months, and Easton, 2, are dressed in Apple Blossom’s pink and green as they listen to bluegrass music by The New River Railroad during the Shenandoah Apple Blossom Festival’s Bloomin’ Sunday at the Frederick County Fairgrounds. 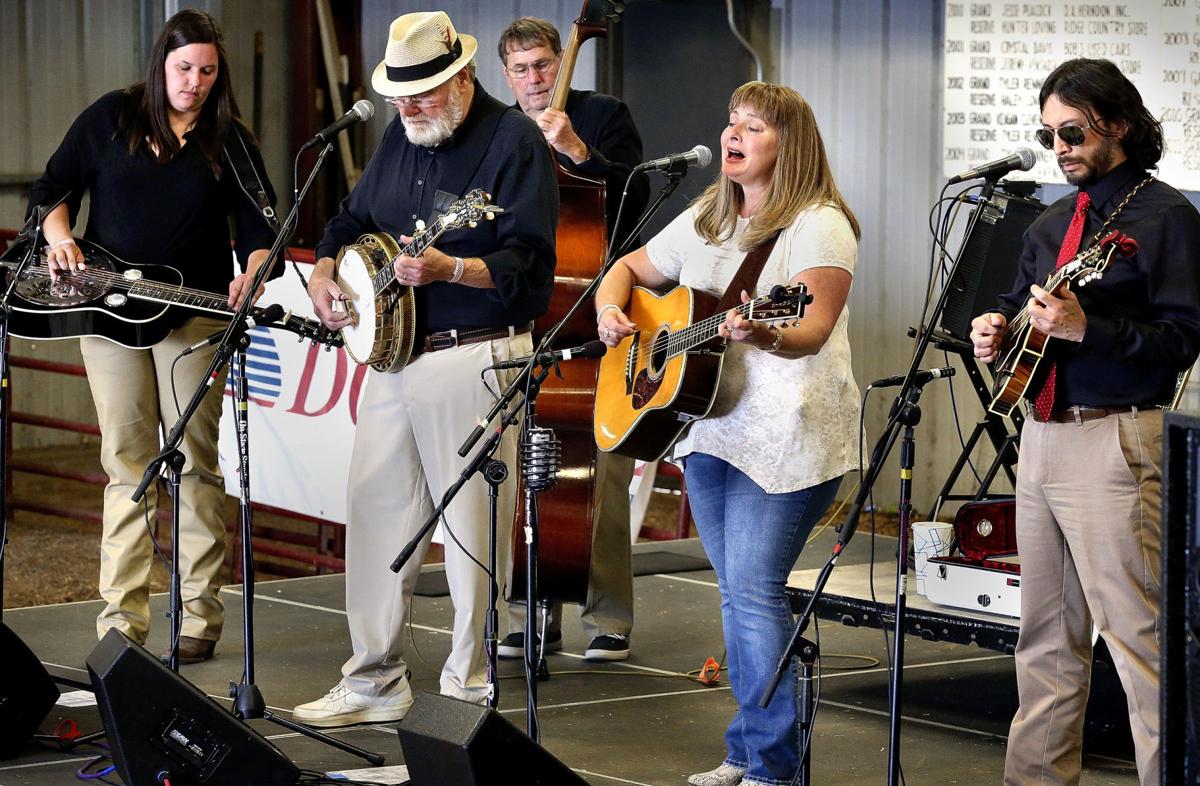 Judge Parker of Ashland (left) and Robert Kidd of Mechanicsville perform with other members of The New River Railroad during the Bluegrass Show at the Shenandoah Apple Blossom Festival’s Bloomin’ Sunday at the Frederick County Fairgrounds.

Ashley Dick of Clear Brook and her children, Camden, 10 months, and Easton, 2, are dressed in Apple Blossom’s pink and green as they listen to bluegrass music by The New River Railroad during the Shenandoah Apple Blossom Festival’s Bloomin’ Sunday at the Frederick County Fairgrounds.

CLEAR BROOK — Of the many activities that took place at the Frederick County Fairgrounds on Sunday during the final day of the 94th Shenandoah Valley Apple Blossom Festival, the seven-hour Bluegrass Festival was probably the most relaxing.

This year’s Bluegrass Festival took place in the show barn, where guests could sit on bleachers and listen to various bluegrass bands perform.

“It is wonderful,” said event chair Tim Price. “It is so nice to be able to have a safe, socially distant crowd. It’s really nice to be able to get back in the swing of things. [Bluegrass] is just an old-time type of country music and it’s a music genre that people really enjoy. One of the reasons we chose this venue as far as the show barn is it kind of gives it that old, barn dance-type feeling. Sawdust on the floor and acoustic guitars. There’s nothing better.”

The last time the Bluegrass Festival was held in 2019, it was in Shenandoah University’s Wilkins Center. While Price said that’s a “great facility,” the show barn has a more intimate, rustic feel.

Venice, Florida, resident Charles Adams said his family attended the show because they wanted to find a shady place, which the show barn offered, and they love bluegrass. Maryland resident Debbie Walker, who came to the fairgrounds with her siblings, also visited the show barn to get out of the sun. She said she enjoyed the performances and hanging out with her sister, who she hadn’t seen in a year due to the COVID-19 pandemic.

“I love all sorts of music, including bluegrass,” Walker said.

The bands that performed were New River Railroad, Shannon Bielski and Moonlight Drive, Jack Dunlap Band and the Gina Furtado Project. Price said all four bands “were excited and chomping at the bit” to play.

Stephens City resident Will Lawrence and his family watched New River Roadroad perform. He described the performance as “comforting.” Like many who attended the show, he said he appreciated hearing live music — something that has been in short supply during the pandemic.

“People have been really forward to something like this,” Lawrence said. “I’m a music fan in general, but they are fantastic.”

Clear Brook Resident Carol Hopkins and Berryville resident Howard White, both bluegrass enthusiasts, sat in folded chairs in the middle of the show barn, giving them a perfect view of the bands. Both appreciated being able to get out of the house. Hopkins said bluegrass performances haven’t been as frequent in Winchester since local bluegrass musician Dalton Brill died in 2008. She said she enjoys any chance she can get to listen to bluegrass.

“Any bluegrass is wonderful to me,” Hopkins said. “I like it because my daddy used to have a mandolin. He really couldn’t play it that well, but when he played it we thought it was wonderful and we would get up and dance around and turn around. We just thought it was fabulous.”

“I’m a musician, so I know all about music being canceled with COVID,” Sileo said. “I’ve had one actual indoor performance in a church with like a 25-person crowd, but I’m used to playing with large concert halls. So just hearing live music makes it feel like things are starting to get back to normal.”

The New River Railroad band was great, but the venue....not so much. Bleachers are harder for older citizens to access and chairs would have been a much better choice.