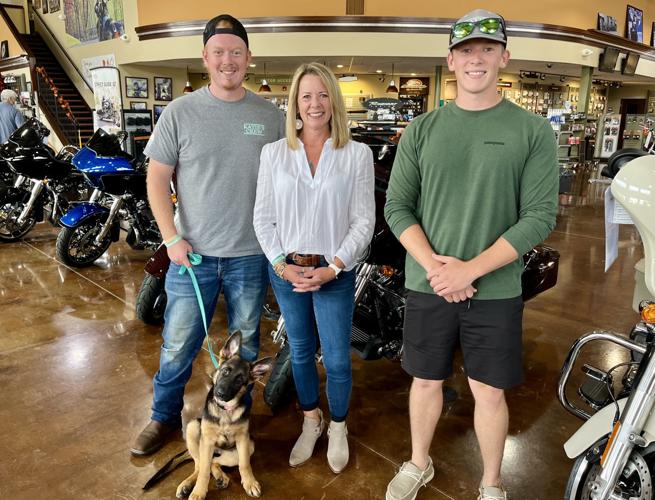 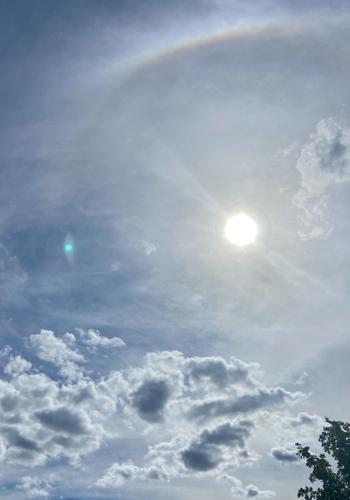 A mysterious green orb — seen here to the left of the sun — showed up in photos taken by more than a dozen people at last year’s Katie Teets Bradshaw Comfort House Car, Truck and Bike Show at Grove’s Winchester Harley-Davidson. Bradshaw’s favorite color was green.

A mysterious green orb — seen here to the left of the sun — showed up in photos taken by more than a dozen people at last year’s Katie Teets Bradshaw Comfort House Car, Truck and Bike Show at Grove’s Winchester Harley-Davidson. Bradshaw’s favorite color was green.

A correction has been made to the article.

WINCHESTER — They were handing out awards at the end of the first Katie Teets Bradshaw Comfort House Car, Truck and Bike Show when attendees looked up and saw that a large halo had encircled the sun.

More than a dozen people pulled out their cellphones to take a picture of the atmospheric display. Oddly enough, every one of the photos they took showed a previously unseen green orb floating in the sky.

Maybe it was a reflection, maybe it was lens flare, or maybe, just maybe, it was Katie stopping by to say hello.

Katie was a nurse at Winchester Medical Center who died from breast cancer on June 25, 2021, just three weeks after the 28-year-old Frederick County resident married the love of her life, Stephen Bradshaw.

“She battled with such grace and beauty,” Julie said. “She was just such a positive force.”

In her memory, Katie’s family formed a nonprofit organization to build Katie’s Comfort House, a facility near Winchester Medical Center where dying people could spend their final days surrounded by loved ones in a home-like setting rather than the clinical confines of a hospital. The car show on Sept. 25, 2021 — exactly three months after Katie’s death — was the first major fundraiser for the cause.

Last year’s show featured nearly 400 vehicles and raised $44,000, but Katie’s brother, Brandon Teets, said this Saturday’s event will be even bigger and showcase twice as many cars, trucks and motorcycles.

“The feedback has been incredible,” said Brandon, who serves as CEO of the nonprofit behind Katie’s Comfort House. “We expect a lot of participation.”

“I think we’re going to have a much larger turnout of motorcyclists this year, too,” Julie added.

A total of 82 awards will be presented to show participants. Anyone who wants to enter a vehicle must do so between 9 a.m. and noon Saturday, and there is a $15 registration fee.

There is no charge to attend the show and check out the vehicles. Guests will also be able to enjoy face painting and a dunk tank, participate in auctions and a 50/50 drawing, and buy food and drinks including the Teets family’s homemade cinnamon rolls.

Brandon said Red Fox Creamery, an ice cream and sandwich shop in downtown Winchester, will be selling an extra special treat: A new flavor of ice cream made from his family’s renowned cinnamon rolls.

“They let us taste test and it’s otherworldly,” Brandon said.

All the money raised Saturday will go toward Katie’s Comfort House, which is working toward establishing a $1.5 million endowment to ensure the facility has a healthy financial base when it opens.

“We will have money in the bank that is constantly working for the house and working for the patients so we never have to turn anyone away,” Julie said. “If there’s a family in financial need that comes to us and doesn’t have the money to utilize Katie’s House, we’re not going to say, ‘No, sorry, you can’t afford it.’”

“Right now we’re at around half a million dollars,” Brandon said of the endowment. “We’re growing rapidly.”

Once the endowment is in place, Julie said another round of fundraising will begin to raise money for construction.

“When we started this, we expected to build within five or six years,” Brandon said. “But at the pace we’re going, we’re hoping to be there in two to three years. ... This house needs to be built.”

Julie said the family is already looking for a plot of land near Winchester Medical Center where they can build Katie’s Comfort House. It’s important to be near the hospital, she said, so terminally ill patients can be transferred to the facility quickly and with as little disruption and discomfort as possible.

“We feel that this was Katie’s mission,” Julie said.

Saturday’s car show will bring that mission one step closer to completion.

“I’m waiting to see how she turns up this year,” Brandon said with a smile.