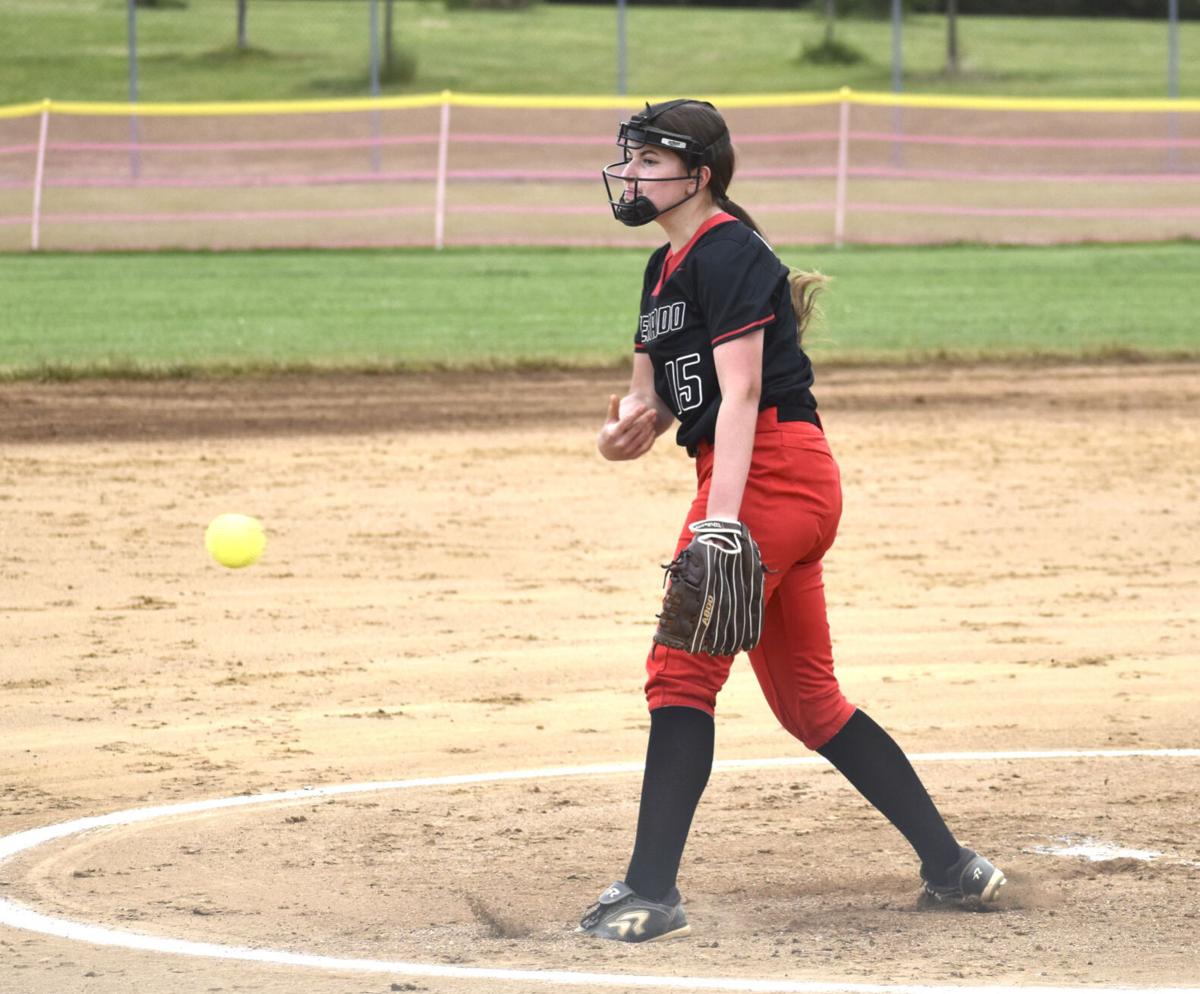 Sherando pitcher Jess Greene pitches in the first inning of Tuesday's 8-6 Class 4 Northwestern District quarterfinal win over Millbrook at Sherando Park. Greene shut Millbrook out in the seventh and had a key assist in the inning after Emma Chunta's grand slam gave the Warriors their first lead in the sixth inning. 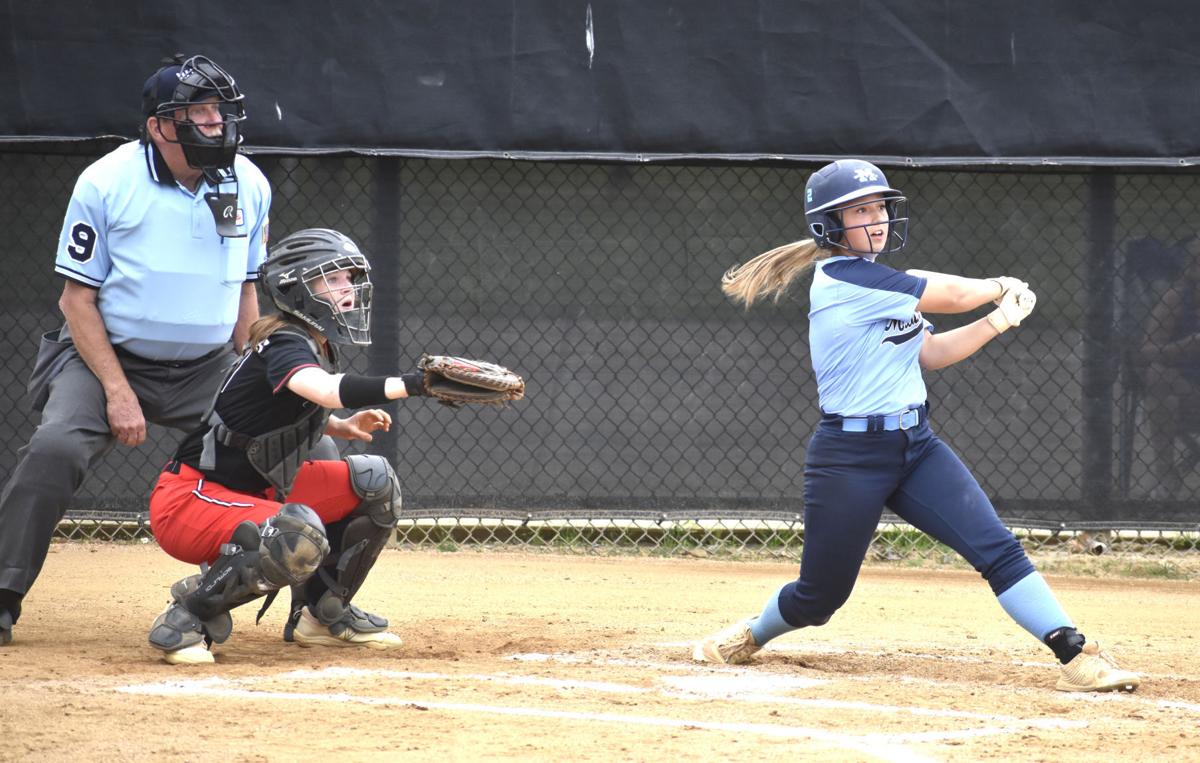 Millbrook third baseman Paige Flincham and Sherando catcher Anna Borst watch the flight of Flincham's fly out to right field in the second inning of the Warriors' 8-6 win over the Pioneers on Tuesday in Sherando Park. 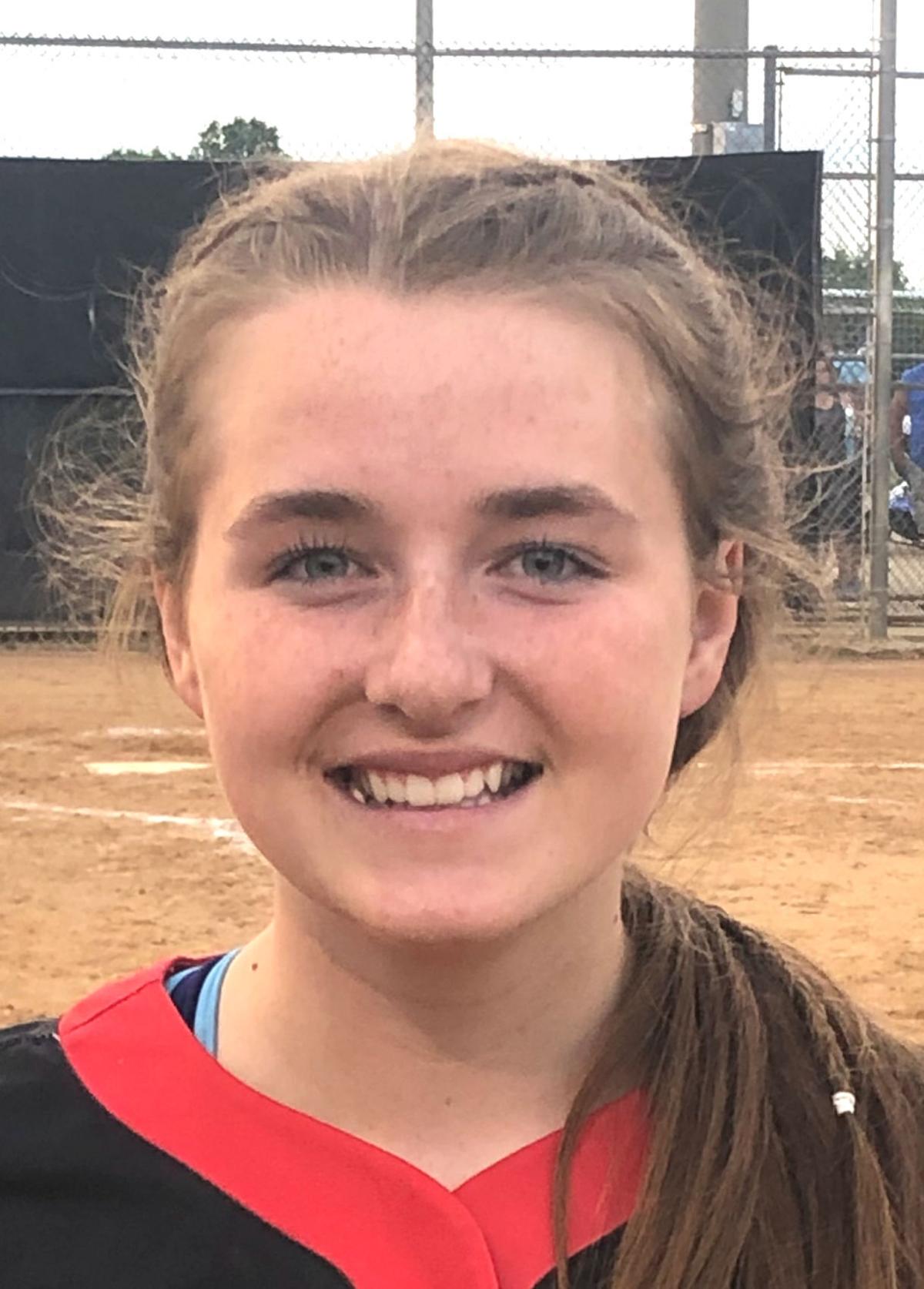 Sherando pitcher Jess Greene pitches in the first inning of Tuesday's 8-6 Class 4 Northwestern District quarterfinal win over Millbrook at Sherando Park. Greene shut Millbrook out in the seventh and had a key assist in the inning after Emma Chunta's grand slam gave the Warriors their first lead in the sixth inning.

Millbrook third baseman Paige Flincham and Sherando catcher Anna Borst watch the flight of Flincham's fly out to right field in the second inning of the Warriors' 8-6 win over the Pioneers on Tuesday in Sherando Park.

STEPHENS CITY — After a 4-0 start, the Sherando softball team had every reason to feel frustrated as a result of losing six times and losing players to injuries during the eight-game stretch leading into the Class 4 Northwestern District playoffs.

The Warriors had ample reason to feel discouraged in their quarterfinal game as a result of Millbrook jumping on top early and immediately responding with runs the first two times Sherando made an offensive charge on Tuesday at Sherando Park.

Through their struggles, the Warriors have maintained their determination, though. And that attitude paid off in a big way when it counted most on Tuesday.

Emma Chunta blasted a grand slam with two outs in the bottom of the sixth inning to give Sherando its first lead on Tuesday. Then the Warriors' pitching and defense produced just its third shutout inning of the game in the top of the seventh inning to secure an 8-6 win that sent Sherando into Wednesday's district semifinal game Fauquier. The Warriors lost 9-2 to the undefeated Falcons to finish the year with a 7-7 record.

"I just think our team, when we're behind, we're really good at coming back," said Chunta, a junior second baseman, after Tuesday's game. "Everybody's mind-set is pretty positive. I think we all just knew that if we just keep hitting, hitting, hitting and putting more pressure on them, they'll start to collapse."

It was the third tight battle of the year between the Warriors (7-6) and Pioneers (6-7). Sherando won the season opener 3-0 and Millbrook dealt the Warriors their first loss with a 10-9, 10-inning victory on May 11.

Down 6-4 on Tuesday, the Warriors applied pressure in the sixth inning through a leadoff walk by Abbie Schellhammer, a sacrifice bunt by Anna Borst, and a single up the middle by Abby Vadnais to put runners on first and third. Vadnais then stole second.

Millbrook sophomore pitcher Emily Jeffries (six innings, eight earned runs, 10 hits, five walks, six strikeouts) struck out Madison Harris for the second out. But then she faced an unappealing option in Sherando third baseman Isabel Hall, who had ripped a home run 10 feet inside the left-field foul pole one inning earlier to make it 5-4 Pioneers.

The Pioneers elected to walk Hall (2 for 2 with two runs and a sacrifice fly) intentionally to set up a two-out, bases-loaded stage for Chunta, the Warriors' cleanup hitter on Tuesday. After a foul and a ball, Jeffries third delivery was right over the heart of the plate, and Chunta let her bat fly. She cleaned up the bases completely, smacking a ball that sailed about 25 feet beyond the fence in left-center to make the score 8-6 Warriors.

"It was pretty much right down the middle. I knew if I didn't swing, [head coach Clarence] Smith would be mad," said Chunta, prompting a laugh from Hall. "So, I swung. It felt really sweet right off the bat."

Chunta said it felt good to see how excited her teammates were as she made her way toward home plate for the second of her two runs on Tuesday. Smith certainly couldn't have been happier for Chunta. She went 2 for 2 with a double against Handley on Thursday but prior to that had only seven hits in 32 at-bats, a .219 batting average.

"I wanted her to be up there to try and do damage. I said hunt your pitch. She got it and put a great swing on it. I was just so proud of her, because she's been doing it in practice, but it just hasn't translated to games quite yet."

Sherando's work wasn't done yet. Millbrook wrapped out 12 hits on Tuesday against Warriors sophomore pitcher Jess Greene (six earned runs, two walks, eight strikeouts). Previously in the game, Millbrook scored twice in the fourth for a 5-3 lead after Sherando scored three times in third to tie the game at 3, and the Pioneers also tacked on a run in the top of the sixth to take a 6-4 lead after Hall's solo home run in the fifth inning.

Sherando sophomore pitcher Jess Greene got a pop-up to start things off. But a walk to Jazmyne Scott (two-run double in the first inning) was followed by a single to right by Grace Badnek that advanced Scott to third base.

The throw from right went toward third, and Badnek took off for second. But Greene cut the throw off and tossed the ball to Harris at second in what appeared to be plenty of time to tag Badnek out. Badnek made it interesting by using her substantial height to veer far toward the outfield side of second base on her slide, and there was uncertainty as to whether she was out or safe. But after the three umpires came together they ruled the Harris had tagged Badnek on the head before she touched the base for the second out.

"I thought Madison did a nice job of getting her glove out and finishing the play," Smith said.

Greene then finished off a gutsy effort by getting Jeffries to ground to second for the final out.

"I feel like all of us thought the last game we played against Millbrook was definitely not our best," Hall said. "We wanted to prove ourselves against them."

In addition to the six losses that started with the Millbrook game, Sherando has been without designated player Jaeda Long all year and been without pitcher Santanna Puller since May 15 and outfielder Makayla Campbell since May 18 due to injuries.

"Nothing has really come easy for us this year," Smith said. "But the girls are used to playing in tough games. They understand that every pitch counts, and they are ready to go all seven innings, or in the case of the last time [against Millbrook], 10 innings if it took that."

Though it was difficult loss for Millbrook, the Pioneers have shown all season that they're a growing team. Millbrook — whose starting lineup consisted entirely of underclassmen on Tuesday — only had a 2-17 record in 2019, and Millbrook hadn't beaten Sherando in several years before beating them in May.

"I'm very proud of my girls," said Millbrook coach Derek Kniceley, whose first game as head coach was the win over Sherando. "All year, we've battled. I've told them all year I believed in them. I feel like we've come forward as a team, and we're going to continue to do that next year.

"[Jeffries] pitched a great game. I would not change anything with how she pitched. They just managed to get two over the fence."