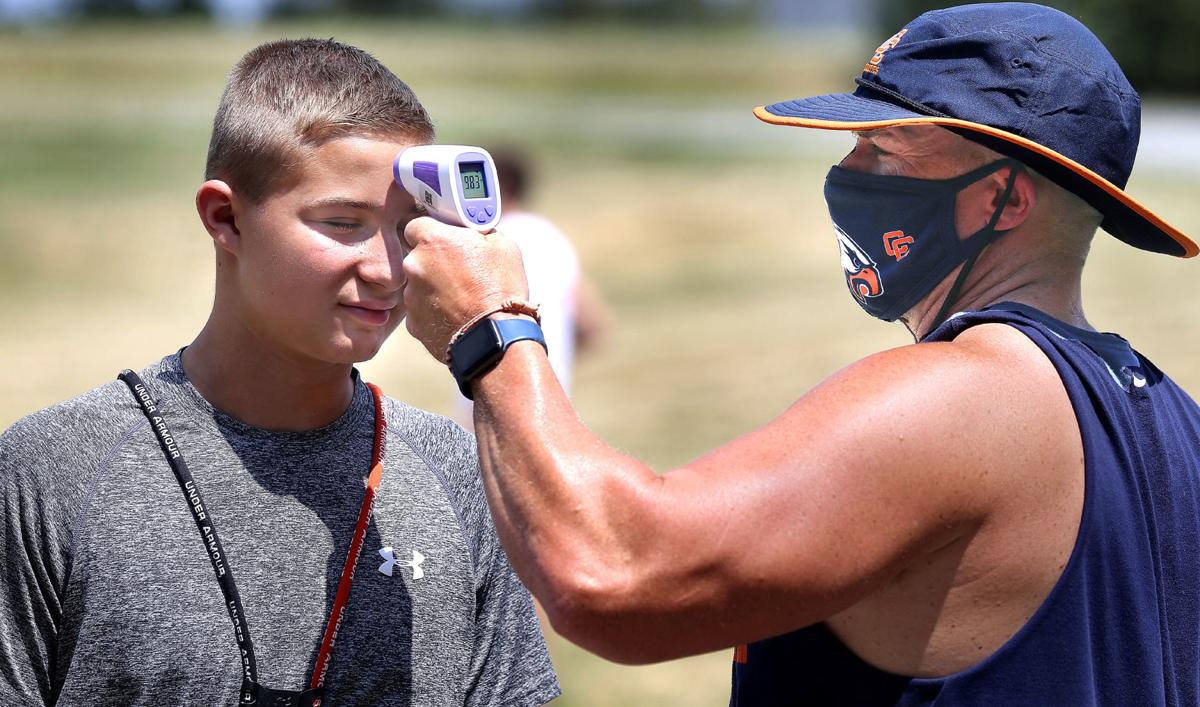 Clarke County head football coach Casey Childs takes the temperature of player Tanner Sipe as he arrives for outdoor conditioning practice at the school Monday. The Eagles are in their second week of out-of-season practices. Because of COVID-19, the VHSL shut down all athletic activity on March 12. It did not allow athletic activity to resume until June 15. 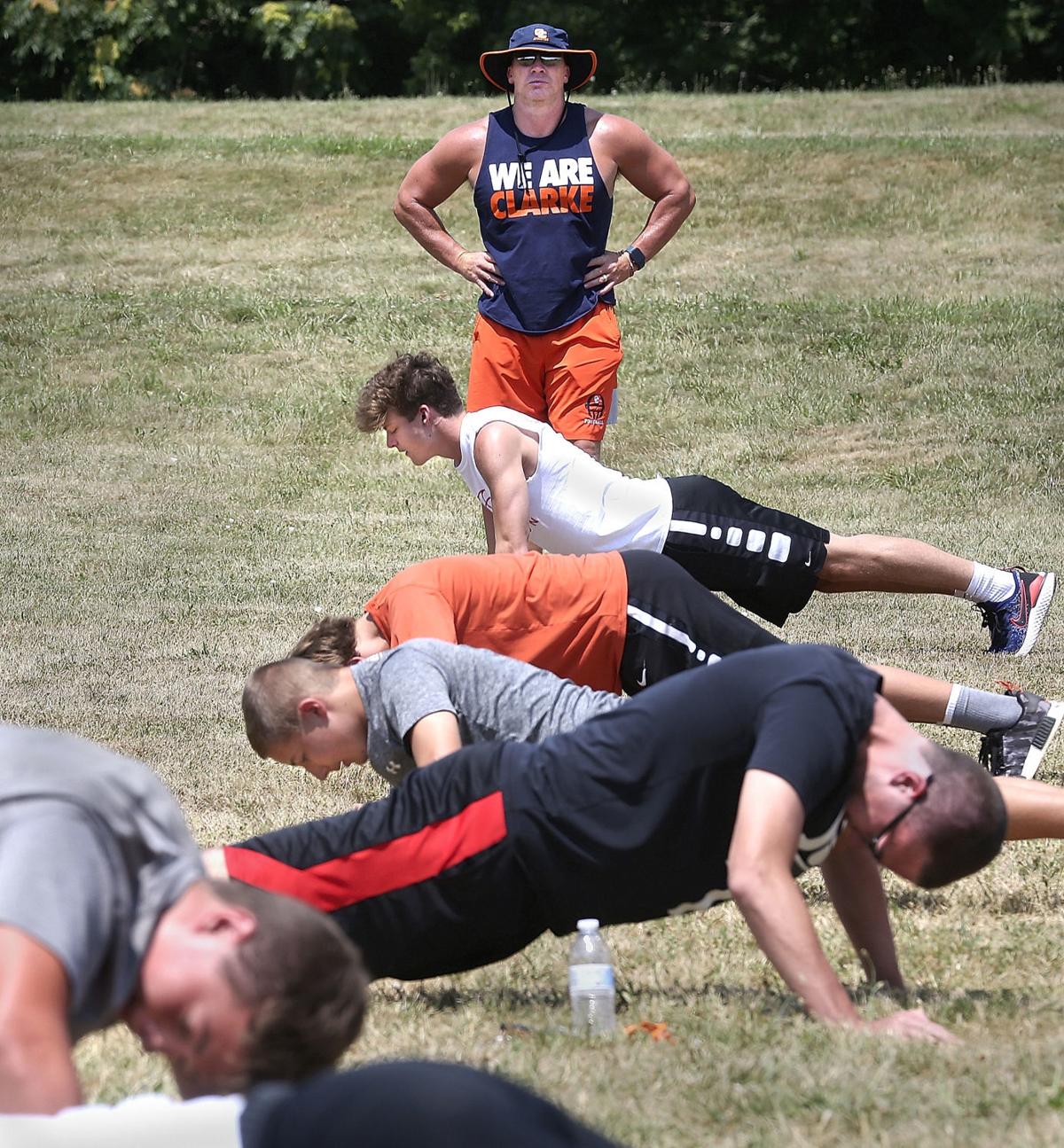 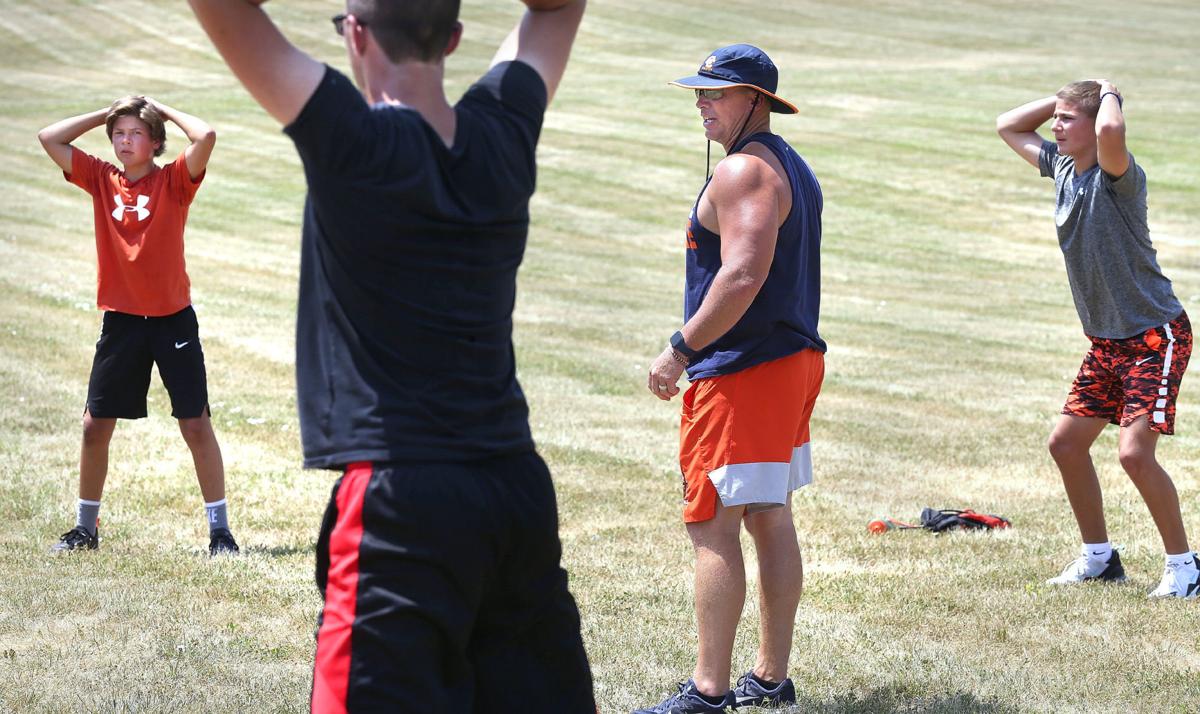 Clarke County head football coach Casey Childs takes the temperature of player Tanner Sipe as he arrives for outdoor conditioning practice at the school Monday. The Eagles are in their second week of out-of-season practices. Because of COVID-19, the VHSL shut down all athletic activity on March 12. It did not allow athletic activity to resume until June 15.

BERRYVILLE — Clarke County rising sophomore Matthew Sipe admitted he “was a little lazy” about working out when schools and athletics were shut down in mid-March as a result of the COVID-19 pandemic.

That’s why he was more than happy to feel fatigued on Wednesday after the Eagles’ 45-minute football training session.

“It feels good to be back,” said Sipe, a quarterback and defensive back. “I had been doing little workouts like push-ups, sit-ups, running, but I had been sitting around. Being around my teammates makes me work harder.”

After shutting down sports on March 12, the Virginia High School League gave clearance to all its members schools to begin out-of-season practice starting on June 15 provided they submitted health plans to the Virginia Department of Education. On June 19, the VHSL issued a lengthy list of recommended guidelines to help all schools make a safe return to sports dealing with COVID-19.

Practices aren’t anything like you see on a game day out of concern for COVID-19. There’s no contact because the VHSL is emphasizing physical distancing, and the groups are made up of 10 are fewer people (including coaches) to limit exposure to COVID-19.

On June 29, the Clarke County football team became one of the first area sports programs to begin out-of-season practice, and the Eagles have been doing the types of the things the VHSL recommended.

Clarke County head football coach and athletic director Casey Childs said on Wednesday that there’s a lot more work involved compared to pre-COVID-19 workouts, but it’s been worth it. Typically in the summer Clarke County will have noon-2 p.m. and 5-6:30 sessions, but now Clarke County needs to oversee players from 11 a.m.-6 p.m.

Also for Clarke County, cross country and cheerleading are approved to train but haven’t set a start date yet. Golfers aren’t meeting as a team but can practice on their own.

As of now, the VHSL has not changed the official start of practice for any of the fall sports, which is July 30 for football and golf and Aug. 3 for volleyball, cross country and competition cheerleading.

All of the fall sports teams at Handley and James Wood have started their out-of-season practices, with the Judges’ golf team starting things off on June 25 (the football team started June 29). Tuesday was the first day of practice for each of James Wood’s teams.

Millbrook’s goal is to have all of its fall sports teams practicing by the end of the next week (golf will start Monday, volleyball will start July 16). Sherando has not set a date to start out-of-season fall sports practice.

Childs has six coaches running his football workouts, with each pod having eight or nine players. There are three sessions per week that last approximately 45 minutes.

Wednesday’s session that started at noon was run by assistant coach Jesse Hudson. He started off by asking health questions of each player — whether they had a fever, cough, sore throat, experienced shortness of breath, or been exposed to anyone with COVID-19. Each player had their temperature taken and brought their own water bottle with them.

Though Childs wants his players working hard, he’s not pushing players to their limits since there’s uncertainty as to when fall sports will start.

Clarke is currently in Phase I of its workout regimen, which consists entirely of outdoor workouts that involve body weight and resistance movement. The Eagles will start Phase II next week, which will involve them going into the weight room.

“They’re working everything,” Childs said. “Monday was an upper body day, [Wednesday] is a lower day, and [Thursday] is a mixture of upper body and lower body [like push-ups and leg raises].”

Sipe said he felt he and his teammates are a lot more comfortable with the workouts in Week 2 compared to Week 1.

Rising sophomore Kyler Darlington, a running and linebacker, agreed with Sipe on the benefits of being able to share the experience of working out with numerous teammates at the same location.

“I missed them,” Darlington said. “I missed working out with them, sweating with them.

“The first day of workouts [last week], I was definitely really sore. This is good. This is getting us prepared for what’s to come.”

The weight room workouts will require more regulations, but Childs feels his players will be up for the task.

“I’m really proud of our kids,” Childs said. “They have followed everything to a tee. These guys show up, pay attention, and they work.”

Childs said once Clarke County goes to the weight room, each player will be assigned their own specific power rack. Childs said Clarke County will be wiping down all equipment before and after every use and will have plenty of hand sanitizer available.

Childs said the Eagles won’t get into lifting heavy weights anytime soon, but when they do they’ll follow the Centers for Disease Control and VHSL recommendations of having spotters stand at each end of the bar. Childs said the weight rooms will be completely sanitized by the custodians each night after all activities are completed.

“We’re doing everything to make sure everything is clean,” Childs said.

The VHSL has not announced any official dates for when it will further discuss fall sports, but the organization will meet again in July and in August. VHSL executive director Billy Haun mentioned at the June 25 VHSL meeting the possibility of changing the sports calendar, which would involve the winter season taking place from Dec. 13 to Feb. 20, the fall season going from Feb. 15 to May 1, and the spring going from April 12 to June 26.

Childs doesn’t know what the VHSL will do, but he thinks it will be able to work out something for student-athletes.

“I am confident that all three seasons are going to happen this year,” Childs said. “I mean that.”