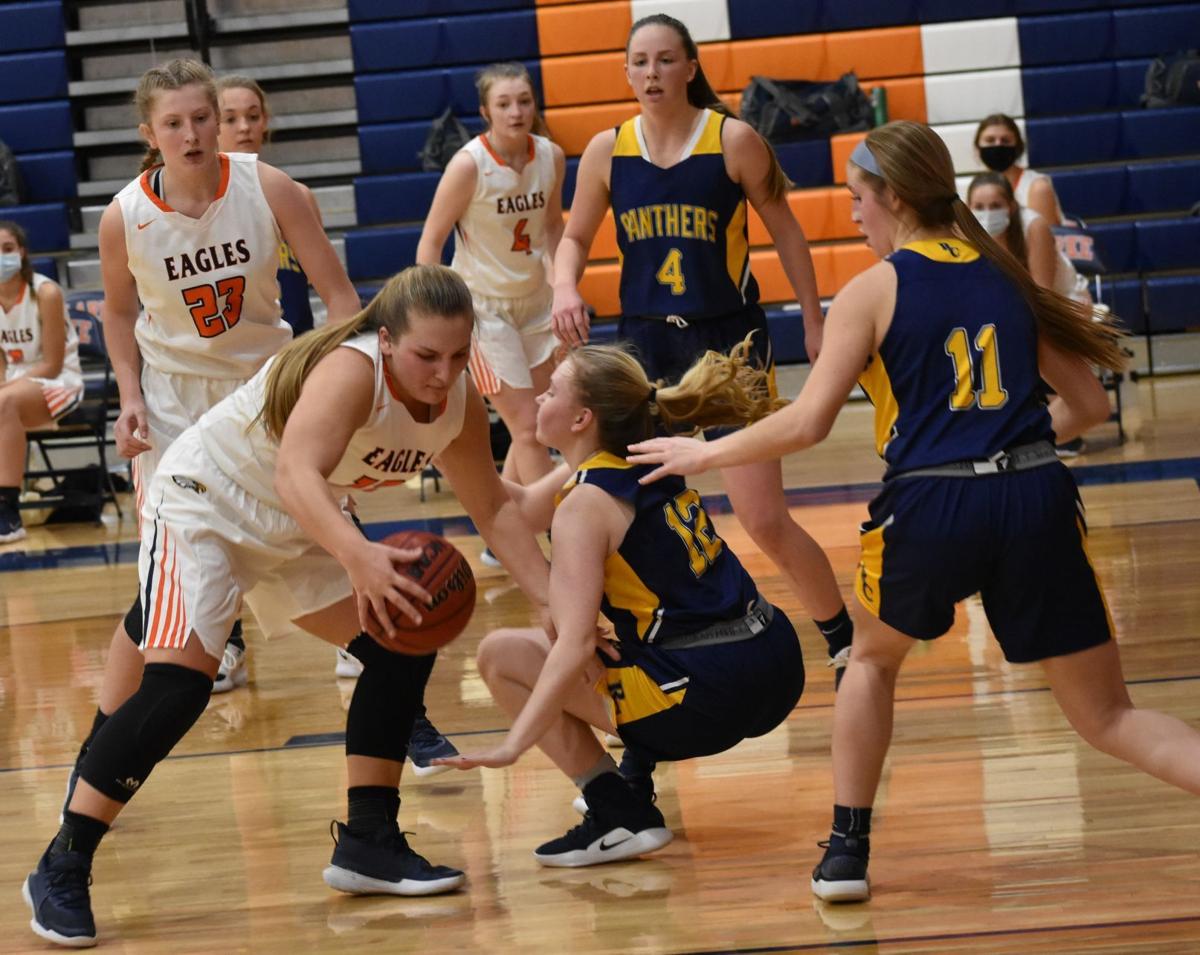 Clarke County’s Alison Sipe drives to the basket as Rappahannock County’s Olivia Schuelen (12) and Mirandah Jenkins (11) defend during Friday’s Bull Run District game. Sipe scored a career-high 23 points as the Eagles won 38-36 in their first game of the season which had been delayed by the COVID-19 pandemic. 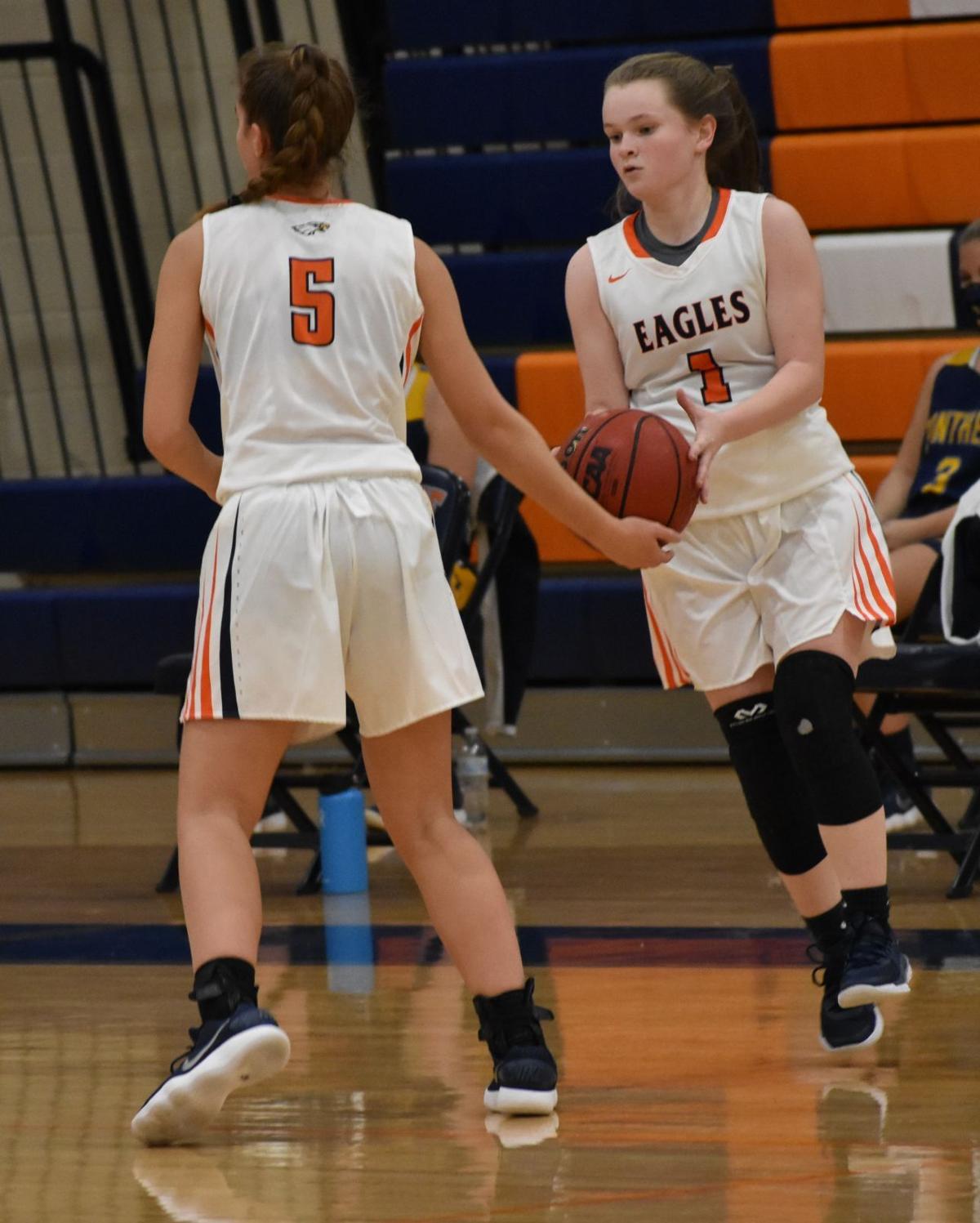 Point guard Michaela Owens (1) takes a handoff from teammate Teagan Lowery during Friday’s clash against Rappahannock County. Owens sank a game-winning 3-pointer with two seconds left to give the Eagles a 38-36 victory. 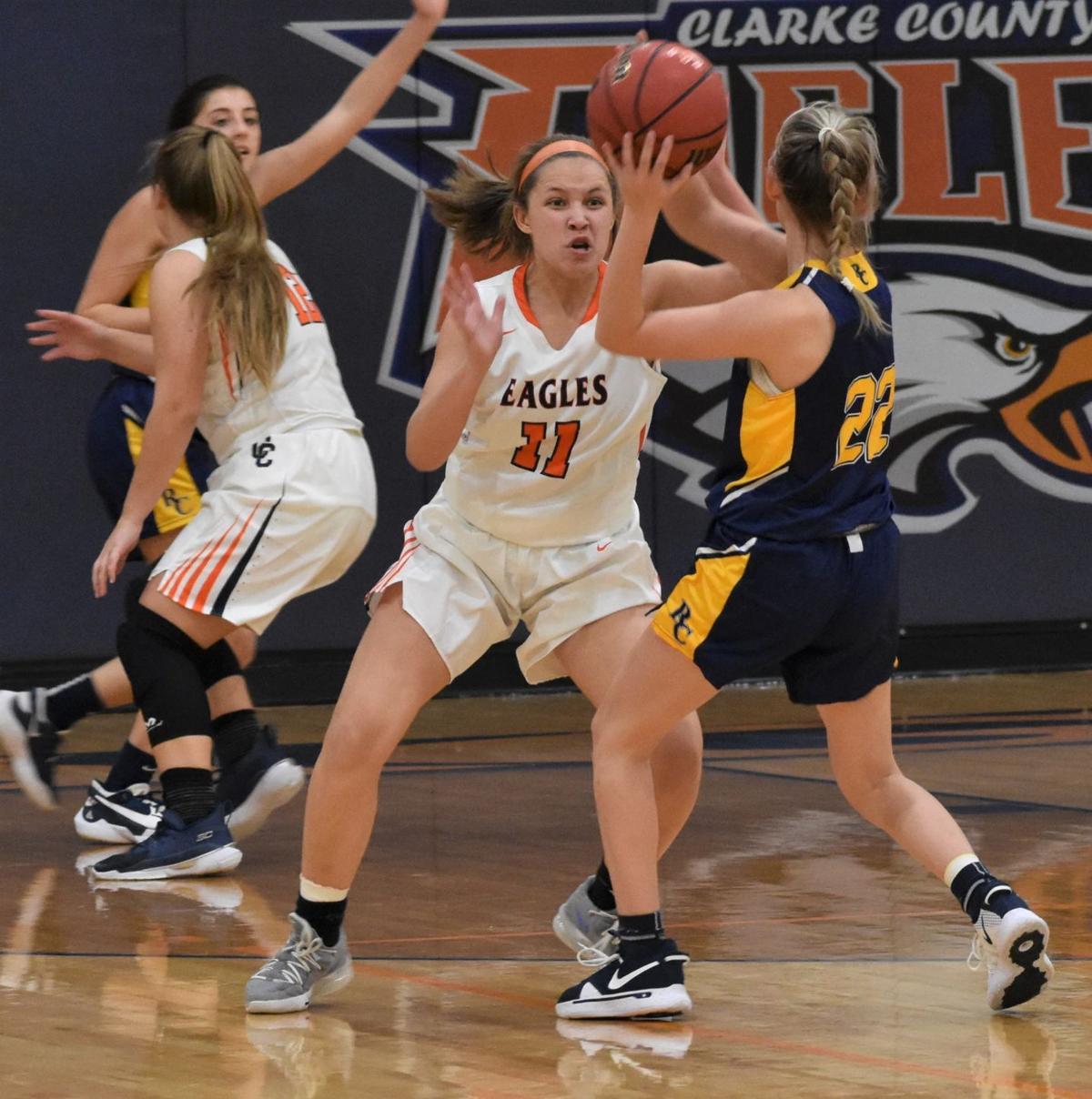 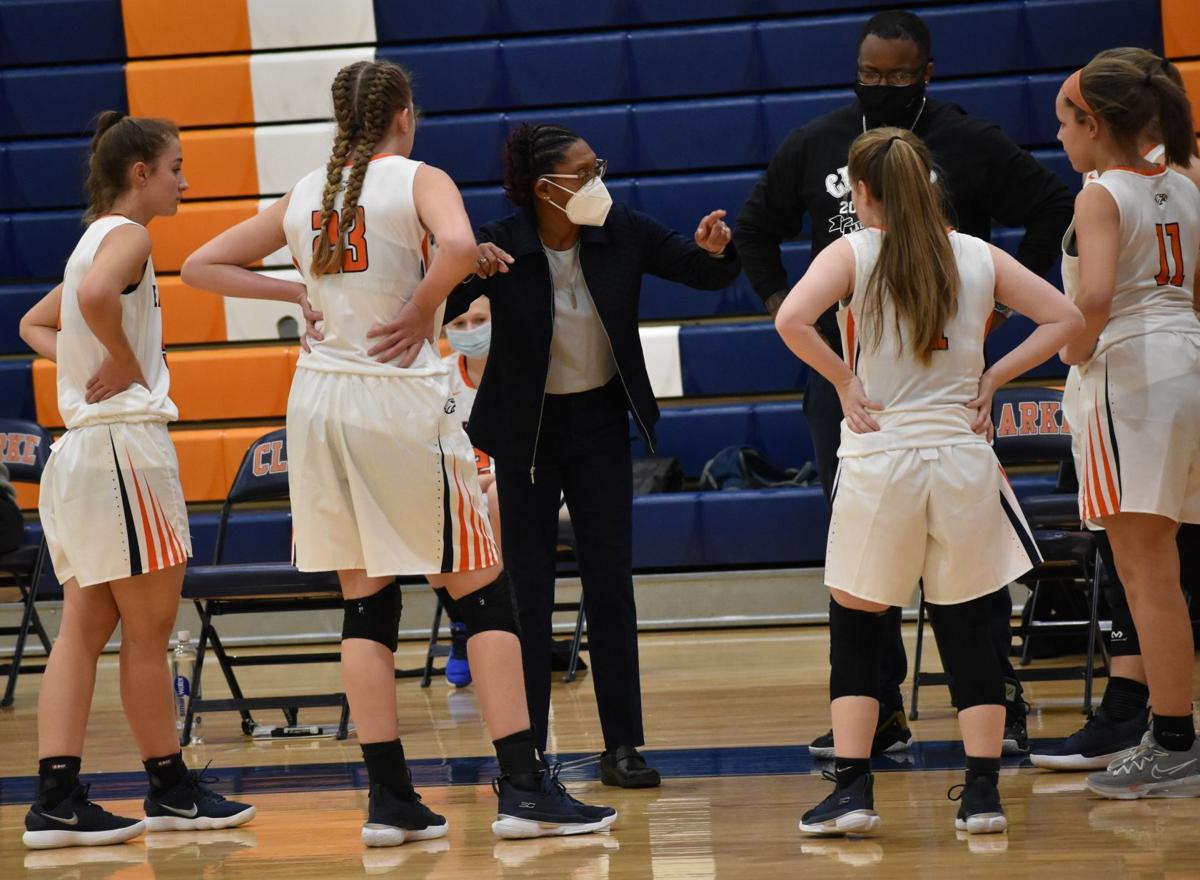 Clarke County’s Alison Sipe drives to the basket as Rappahannock County’s Olivia Schuelen (12) and Mirandah Jenkins (11) defend during Friday’s Bull Run District game. Sipe scored a career-high 23 points as the Eagles won 38-36 in their first game of the season which had been delayed by the COVID-19 pandemic.

Point guard Michaela Owens (1) takes a handoff from teammate Teagan Lowery during Friday’s clash against Rappahannock County. Owens sank a game-winning 3-pointer with two seconds left to give the Eagles a 38-36 victory.

BERRYVILLE — Getting the chance to play Friday night was a victory of sorts for the Clarke County girls’ basketball team.

Winning on a shot in the final seconds was just icing on the cake.

Freshman Michaela Owens drained a 3-pointer with two seconds remaining and the Eagles rode a career-high 23-point performance from Alison Sipe to a 38-36 victory over Rappahannock County in Bull Run District action.

The contest was the first Virginia High School League varsity event in the area since the COVID-19 pandemic struck in March. After voting to delay to the start of the proposed VHSL season, the Clarke County School Board agreed last Monday to let athletics begin Friday.

“Oh, no never,” said Sipe when she was asked if she thought there was a possibility that the Eagles would play this season. “I was really hopeful and I was just crossing fingers for the longest time. Then when they gave us the go on Monday at the school board meeting I was really thankful to get the opportunity to play.”

“Honestly I didn’t think we were going to play, but I’m really glad we had this opportunity,” Owens added. “I’m glad we took advantage of it.”

Certainly, thanks to COVID-19 guidelines, the Eagles’ season opener was a little different.

Just a handful of parents were allowed (25 is the maximum) as spectators and everyone entering the gymnasium had to get a temperature check.

While the spectators were seated on one side, the teams and the scorer’s table were on the other. Instead of a bench, players and coaches were seated in two rows of chairs with six feet between them. When they weren’t on the floor, player wore masks. Entering and coming off the floor, players used hand sanitizer.

Two basketballs were used throughout the contest. During timeouts, a new ball came in and the other ball was rolled out for Clarke County baseball coach Mike Smith to sanitize until the next break in play.

And prior to the game, Sipe received Senior Night honors, which are usually reserved for the final home game of the season. With the chance of a team being quarantined if a player or coach has a positive COVID-19 test, the Bull Run District wanted to make sure the seniors were honored at the first opportunity.

While there were many differences, the joy of competing was evident from the start.

“I tell you what, I am just so excited these kids get to play,” Clarke County coach Regina Downing said. “Especially for Alison, she has just worked so hard and she’s our only senior. She’s stepped in and took these young kids under her wing and has just been a positive influence and example to them on how to work hard. It’s just 1,000 little things.”

Sipe and her teammates somehow overcame making just one basket in each of the second and third quarters to pull out the victory against Rappahannock County, which was playing its fourth game of the season and is now 0-4.

“It was frustrating because we were just getting one pass, shot up and a miss,” Sipe said. “No one was crashing the boards. I feel like we really picked it back up in the fourth quarter and got the win.”

Having trailed most of the game, the Eagles found themselves down 30-22 (their largest deficit) just 20 seconds into the final quarter.

But given a lift by the return of Keira Rohrbach, who had sat out the third quarter after picking up four fouls in the first half, Clarke County rallied.

While Rorhbach brought up the energy, Sipe continued to be the only consistent offense for the Eagles. She scored eight points and capped a 10-1 run with a 3-pointer that gave the Eagles their first lead of the game at 32-31 with 4:18 remaining.

But Rohrbach fouled out less than a minute later. Tori Atkins sank 3 of 4 free throws and Carrington Wayland added a layup as the Panthers quickly moved back on top at 36-32 with 2:30 left.

Sipe’s 3-pointer, her third of the game, cut the margin to 36-35 with 1:48 left and despite each team having several chances the scoreboard stayed that way until the final seconds.

Clarke County’s scrappy defense set up the game-winner. With 19.4 seconds left, the Eagles forced a tie-up and the possession arrow was in their favor.

Downing called her final timeout and as Sipe headed to the bench she knew the chances that the Panthers would allow her a chance at a game-winner were slim.

“In the timeout, I said they know it’s going to come to me, so we need to look at our other shooters,” Sipe said. “Michaela Owens did a great job shooting it.”

Downing said she and her staff had been discussing the same thing and that Owens, who had yet to score, was in the game because of her marksmanship. During the timeout, she had some advice for the freshman point guard. “I said, ‘Hey, you’ve got to be ready to shoot that ball at the end because it is going to come to you,’” Downing said. “She was ready to shoot it.”

The Eagles did get the ball to Sipe, but her drive was cut off by two defenders. Sipe passed to Kaiya Williams, who found Teagan Lowery at the foul line. Lowery then passed to Owens, who had spotted up behind the 3-point line on the left side. Owens fired her shot past the taller Atkins and drained it. The stunned Panthers, who had no timeouts, got the ball inbounds but did not cross halfcourt as Owens was swarmed by her teammates.

“I kind of just got caught up in the moment,” said Owens, who added that she also nailed a buzzer-beater against East Rockingham last year for Clarke County’s JV team. “I knew we had to score a bucket so I just did it myself.”

“The more confidence she can get, she can definitely be a big threat,” Sipe said.

“Our defense is what got us the victory tonight,” Downing said. “We couldn’t hit a basket there for awhile. We were turning it over so much or we were just so quick to get rid of it and not looking to see what we have.

“The defense came on,” she added. “That’s what we’re going to rely on this year — our defense. Once these kids understand what we’re trying to get them to do and buy in, we can be pretty tough.”

Sipe kept the Eagles alive with her career offensive night, as the young squad (six freshmen, three sophomores) battled back.

“We started off a little rough, but winning was really nice,” Owens said. “I think we have a good season ahead of us.”

Atkins led the Panthers with 16 points and Wayland added 10. Lowery netted six points for the Eagles.

Clarke County now has four games in the coming week, but certainly the first contest back from the pandemic couldn’t have ended better.

“I’m just grateful for every moment to step on the floor and that I’m healthy, happy, that our team is coming together and to get this win,” Sipe said. “… I feel like the more and more the season keeps going, the more and more we’ll come together as a team and play even better than we did tonight.”