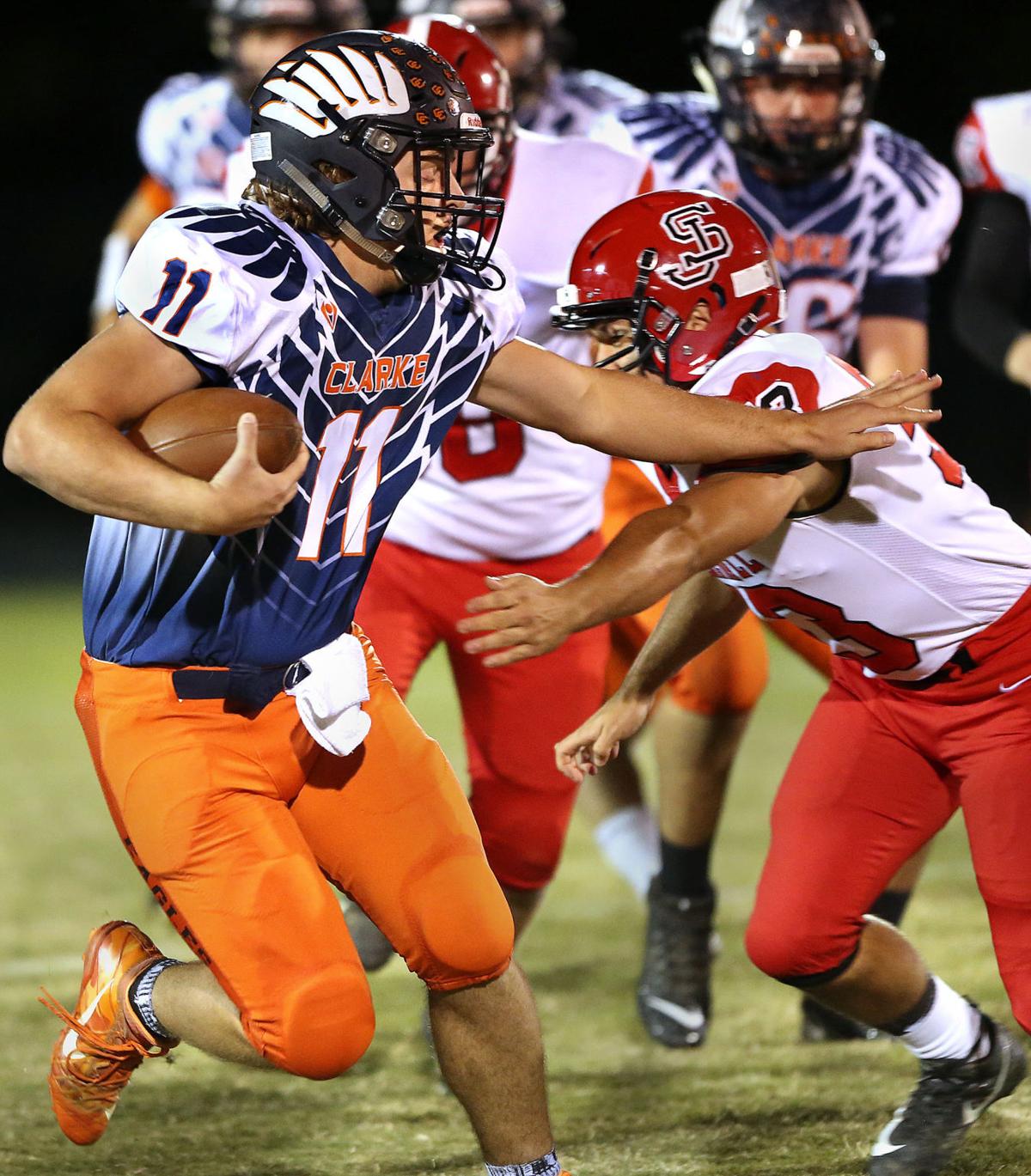 Senior tight end and defensive end Trey Trenary (11) and the Clarke County football team will open the football season with East Rockingham, the team that knocked the Eagles out of the playoffs last year. The game will take place on a Monday night (Feb. 22) in Elkton. 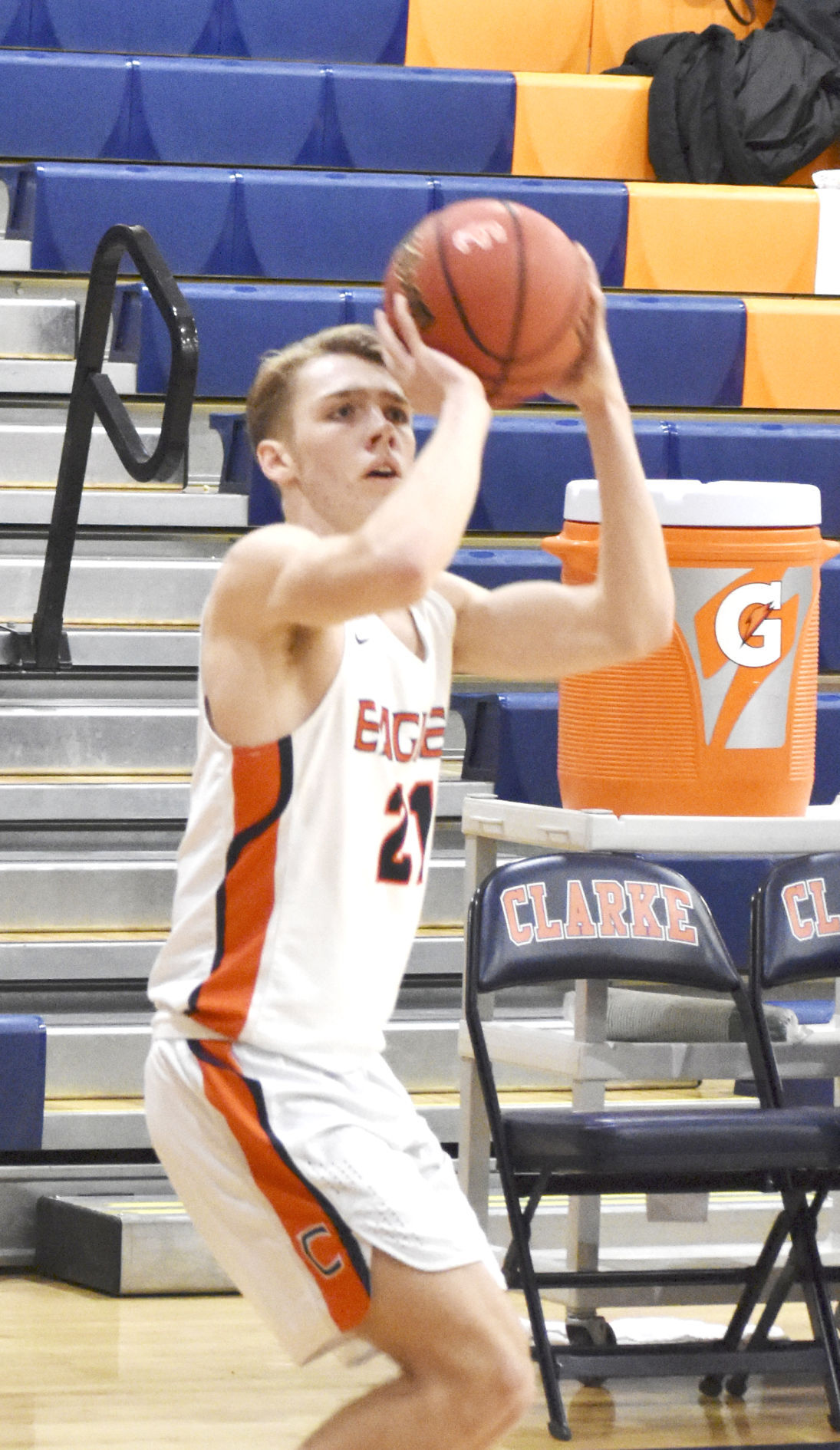 Ellis Nei and the Clarke County boys’ basketball team will open the season at Strasburg on Dec. 21.

Senior tight end and defensive end Trey Trenary (11) and the Clarke County football team will open the football season with East Rockingham, the team that knocked the Eagles out of the playoffs last year. The game will take place on a Monday night (Feb. 22) in Elkton.

Ellis Nei and the Clarke County boys’ basketball team will open the season at Strasburg on Dec. 21.

The Virginia High School League 2020-21 scheduling parameters are set, and the schedules for the local high schools are starting to take shape.

Clarke County has most of its schedules ready to go. With teams limited to 60 percent of a normal regular-season schedule because of changes prompted by COVID-19, the Eagles' competitors in every head-to-head competition (except tennis) will be made up entirely of Bull Run District opponents.

The 2020-21 sports year will kick off with winter sports in December. Fall sports start in February, and spring sports start in April. The VHSL released the official dates for each season and the contest limitations for each sport last week.

Each sport will feature state championship competition, and teams that don't advance to regional competition will have the opportunity to compete in an extra event.

"It's just good to see that something's finally set in stone," Clarke County director of athletics Casey Childs said. "It's taken a little bit of time, obviously, but it's been well thought out by the Virginia High School League. I'm just glad that we finally we have some actual seasons to look forward to."

The VHSL football schedule calls for a six-game schedule to be spread out over seven weeks. That worked out perfectly for the Bull Run, which has seven football members and can play a round-robin schedule of six games. (Rappahannock County is also part of the eight-team district, but coming into the year the Panthers had already planned to not play a Bull Run football schedule.)

The VHSL "Championships + 1" plan recommended that football teams play their first game on Monday. Feb. 22, and their second game on Saturday, Feb. 27, and the Eagles followed those guidelines. Clarke County will open at East Rockingham at 6 p.m. on Feb. 22 and will host Madison County at 7 p.m. on Feb. 27.

The remainder of Clarke County's games (all of which will kick off at 7 p.m.) will take place on Fridays. The Eagles will host Luray on March 5, travel to Stonewall Jackson on March 12, host Strasburg on March 19 and travel to Page County on March 26. Clarke County will have an open date on April 2.

The Region 2B playoffs, which will feature the top four teams in the VHSL power ratings, start April 9. If the Eagles do not qualify, they would be eligible to play an extra game (the "+ 1" part of the plan).

For the team sports of volleyball, basketball, baseball, softball, soccer and tennis, it's possible that the Bull Run will hold district tournaments, but details are still being worked out. Just like in a normal year, district tournaments will not count toward the contest limitation number for each sport.

Childs said no decisions have been made on what the Region 2B tournaments will look like in team sports. The region has discussed using the modified power ratings system that was created prior to the 2019-20 school year. The VHSL has declared that only the region champion will move on to the state tournament.

The basketball season allows for 14 contests, so Clarke County will play every Bull Run team twice.

For volleyball, baseball, softball and soccer, contest limitations prevent every Bull Run District team from playing each other twice. For the most part in those sports, Childs said the Bull Run decided to have each school play the schools that are closest to them twice, and play the ones farthest away from them once.

"We tried to take travel into account when making the schedules," Childs said.

In tennis (10 contests), there are only three schools with boys' programs and five with girls' programs.

The wrestling, swimming and competition cheer schedules have not been finalized yet. Childs said the Eagles are not sure which venues will be able to host swim meets, and they're waiting to see what types of competitions they'll be allowed to have in all three sports.

Cross country and track & field (six-contest limit each) currently have five regular-season meets, all of which have three teams or less. If it's possible for large invitationals to take place, the teams in each sport will use their remaining contest option for one of those.

Golf (eight contests) currently has the district tournament scheduled for April 6 at a location to be determined.

It would be nice if we could have seen some old rivalry games with the local Frederick County Schools since this season is basically a wash, why not have a little fun with it?