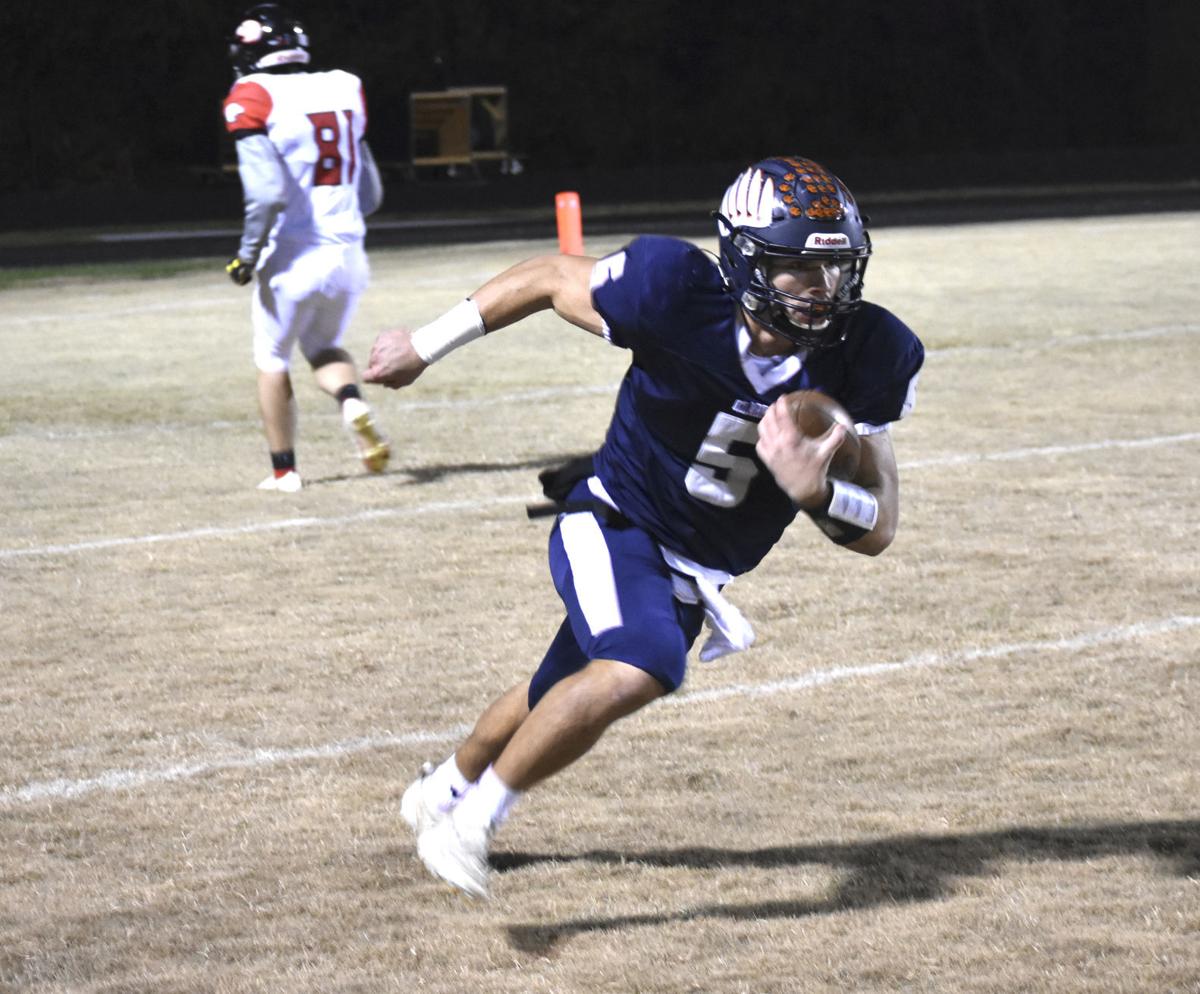 Matthew Sipe makes his way upfield for a 30-yard return after intercepting a pass intended for East Rockingham’s Zachary Joyner (background) at the Clarke County 15 in Friday’s Region 2B quarterfinal game at Feltner Stadium. Sipe had one of Clarke’s three interceptions in a 31-0 win. 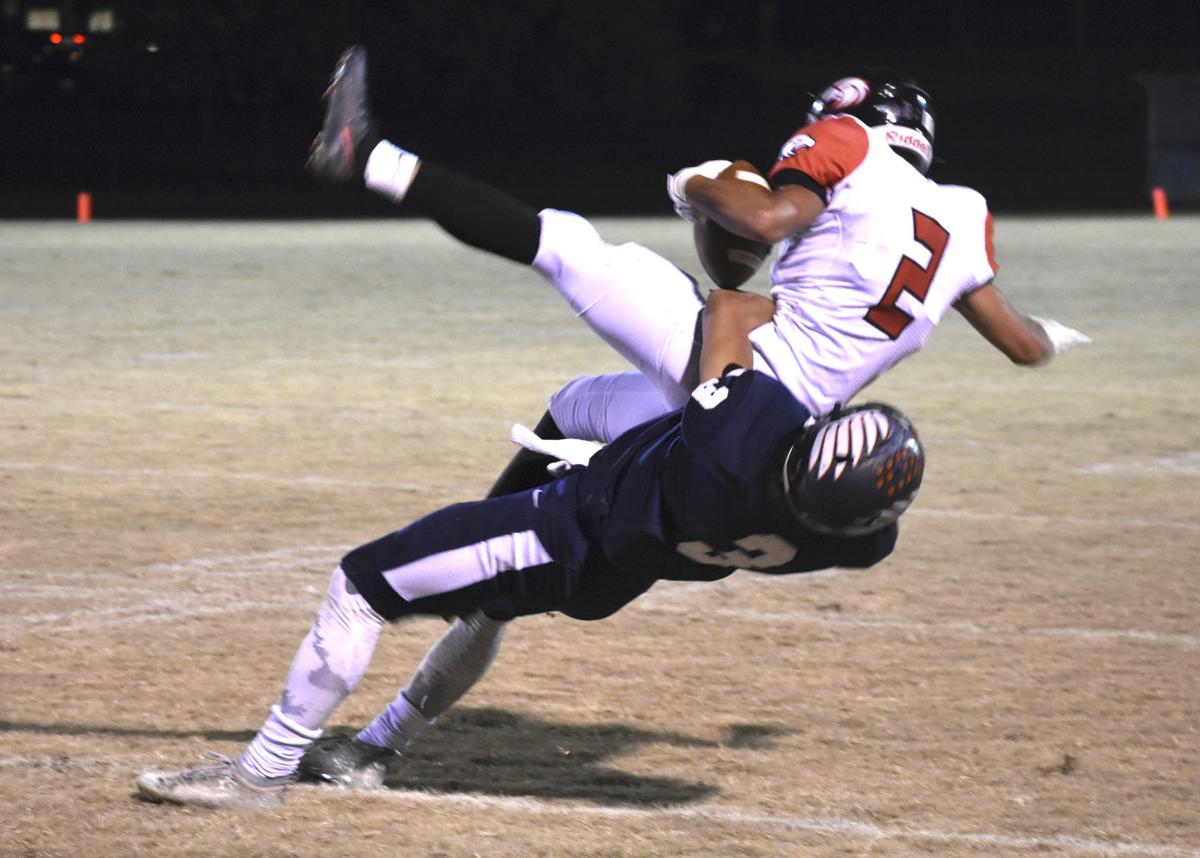 Clarke County's Cordell Broy (3) starts to slam East Rockingham's Xavia Brown to the ground and after twisting and lifting him following a four-yard catch in the first quarter of Clarke's 31-0 victory at Feltner Stadium on Friday. 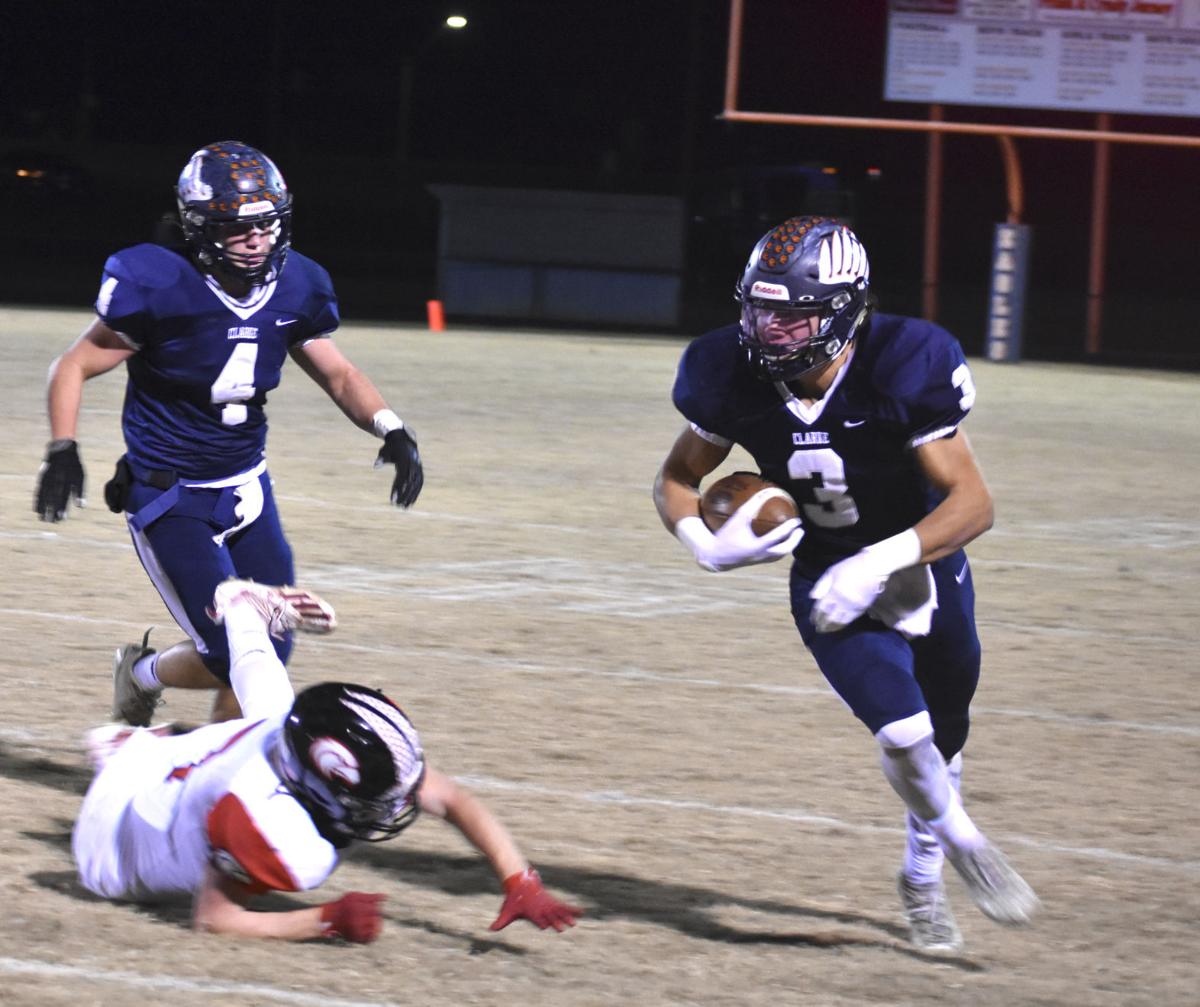 Cordell Broy (3) makes his way toward the sideline after intercepting a pass and bowling over East Rockingham's Blake Morris as Clarke County's Titus Hensler (4) looks on. The interception set up a 35-yard touchdown drive for Clarke that made it 14-0 en route to a 31-0 win Friday at Feltner Stadium.

Matthew Sipe makes his way upfield for a 30-yard return after intercepting a pass intended for East Rockingham’s Zachary Joyner (background) at the Clarke County 15 in Friday’s Region 2B quarterfinal game at Feltner Stadium. Sipe had one of Clarke’s three interceptions in a 31-0 win.

Clarke County's Cordell Broy (3) starts to slam East Rockingham's Xavia Brown to the ground and after twisting and lifting him following a four-yard catch in the first quarter of Clarke's 31-0 victory at Feltner Stadium on Friday.

Cordell Broy (3) makes his way toward the sideline after intercepting a pass and bowling over East Rockingham's Blake Morris as Clarke County's Titus Hensler (4) looks on. The interception set up a 35-yard touchdown drive for Clarke that made it 14-0 en route to a 31-0 win Friday at Feltner Stadium.

BERRYVILLE — Clarke County head coach Casey Childs enjoyed the opportunity to rave about his secondary at the All-Bull Run District meeting, and that unit sure made him look good on Friday night.

Third-seeded Clarke County’s secondary intercepted three passes and broke up several others as part of an overall dominant defensive effort that helped produce a 31-0 win over No. 6 East Rockingham in the Region 2B quarterfinals on Friday night at Feltner Stadium.

Clarke County took the lead for good on the game’s third play from scrimmage on a 67-yard touchdown pass from Matthew Sipe to Broy, and the Eagles maintained a pretty firm grip on the game from there behind a defense that limited East Rockingham (4-6) to 132 yards (70 passing) and an offense that gained 282 yards (203 rushing). Junior running back Kyler Darlington, the Bull Run District Offensive Player of the Year, rushed for 107 yards and two TDs on 25 carries.

Clarke County is the only one of the five area high schools that came into Friday with three members of its secondary having made at least three interceptions each in Broy, Dain Booker and Will Booker. Each of them made the Bull Run District First Team (Broy is the Defensive Player of the Year), and each of them did their part to make sure East Rockingham quarterback Jakari Eaves (8 of 16 for 70 yards) had a rough night.

Broy and Will Booker each had interceptions in East Rockingham territory on slants over the middle to set up Clarke County touchdowns, and Dain Booker also made sure Eaves’ passes didn’t reach their intended targets. Sipe had Clarke’s first interception on Eaves’ deep throw inside the red zone from the Clarke County 40.

“DBs were amazing this game,” Broy said. “We just locked ‘em up and didn’t let them get nothin’.”

“Our skill kids on the back end were tremendous,” Childs said. “I said this in the district meeting — when you have Will Booker and Cordell Broy and you throw Sipe back there in the secondary ... my goodness, they’re just so athletic. And then Dain Booker’s covering everybody. What Dain can do is play as a hybrid linebacker that can be inside the box and also step outside and cover guys. And Timmy Ballon came in at nickel and did a tremendous job.

Childs said the Clarke coaching staff made sure the secondary had a chip on its shoulder too, reminding them that Eaves hit some big pass plays in the first matchup between the two teams on Oct. 22, a 28-14 Clarke County victory.

“We challenged our kids on the back end to be better, and they were beyond better,” Childs said. “There wasn’t an open receiver all night, and we were knocking balls away and picking them off, and batted balls down at the line.”

Sipe’s first pass of the game picked up almost as many yards as Eaves threw for all game.

After Clarke rushed for one yard on first down and lost three yards on a second-down carry, Sipe (3 for 4 for 79 yards; eight carries for 41 yards) faked a handoff on a spinner play and heaved a deep pass that Broy caught behind the defense in stride inside the ERHS 30.

Broy (six carries, 37 yards) pulled away from the ERHS defender for the 67-yard TD reception, and Chris LeBlanc’s extra point made it 7-0 with 10:26 left in the first quarter.

“That was huge,” said Childs, whose team came in averaging 22.7 passing yards per game. “The first two plays, they were pinching extremely hard off our edge. Sipe threw a great ball and Cordell hit an extra gear to get it. That set the tone for the rest of game.

“We run the ball so well, but you’ve got to throw the ball, too. I thought it was one of [Sipe’s] best games. He blocked well, too.”

ERHS had an excellent opportunity to try and get even when the Clarke punter LeBlanc had to run with the ball after scrambling to pick up a low snap. ERHS took over at the Clarke 37 with 5:02 left in the first quarter after tackling LeBlanc for a 2-yard loss. But two runs by Benjamin Finkel only netted four yards, and Eaves’ pass on third down was tipped and fell to the ground. ERHS punted the ball into the end zone for a touchback.

On the first play of the second quarter, Eaves was picked off for the second time, this time on a slant near the ERHS 40 by Broy. Six plays later, Darlington ran in around the right side for a 1-yard TD and a 14-0 lead with 9:19 left in the second quarter.

LeBlanc added a 27-yard field goal on the final play of the first half that made it 17-0 and capped a 16-play, 55-yard drive in which the Eagles converted two fourth downs, one with the help of an East Rockingham facemask penalty. Darlington (31 yards) and Carson Rutherford (1 yard) scored on rushing TDs in the second half. Will Booker’s interception set up the Rutherford TD.

“It feels good,” said Darlington of ending the Eagles’ short playoff victory drought. “And it feels good to get Coach Childs his first playoff win as head coach, too.”

“I’m so excited for these kids,” Childs said. “It’s rare air when you can win double-digit games.”